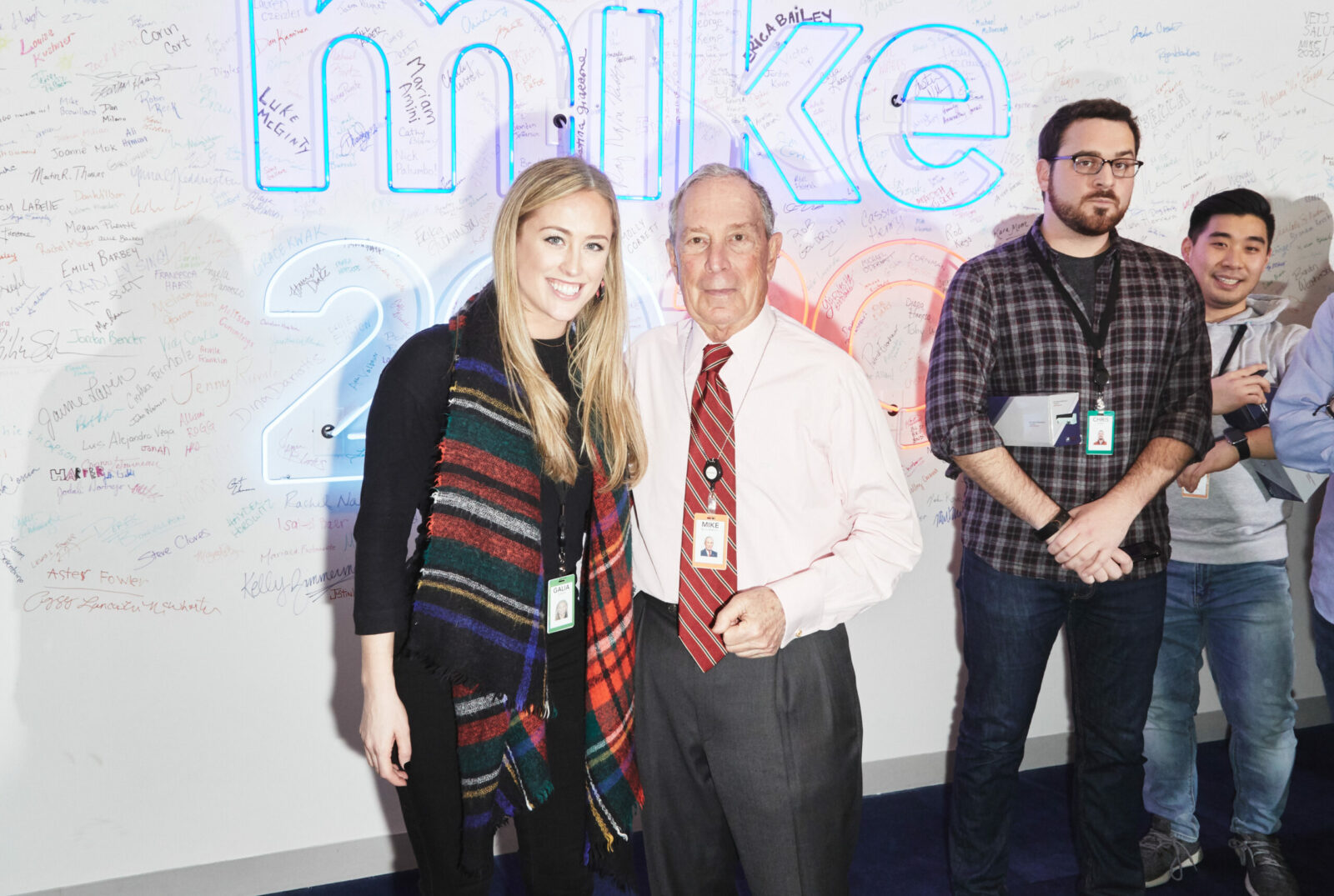 The Hebrew-speaking spokeswoman on the road with Mike Bloomberg

'I think at the end of the day, his intention is that he cares and that he wants tikkun olam. He wants to make the world a better place'

Galia Slayen’s first taste of political campaigning came at age 16, as an intern with Steve Novick’s 2008 Democratic primary campaign for Senate in Oregon.

“We were a long-shot progressive candidate. He was 4’9”. His left arm was a hook,” Slayen, today the traveling press secretary for Michael Bloomberg’s 2020 presidential campaign, recalled. “We had these really cool creative campaign ads” — which included “The fighter with the hard-left hook” and even a press release in pirate speak. Had Twitter been a bigger part of the political landscape in 2008, Slayen predicts, “they would have been viral.”

Novick narrowly lost his primary bid, but Slayen gained an appetite for campaign life. A dozen years and eight different election campaigns later, the 29-year-old has devoted herself to propelling Bloomberg toward winning the Democratic nomination — and the presidency.

Slayen sat down recently with Jewish Insider at the bustling Bloomberg campaign headquarters in midtown Manhattan to discuss her personal and political journey. Just inside the entrance to the offices, two large countdown clocks adorn the wall — one ticking down to Super Tuesday, and the other to Election Day. Conference rooms ring the main workspace, each named after battleground states and marked with the number of delegates at stake. Slayen and I meet up in Wisconsin — where 90 delegates are up for grabs.

Slayen joined Bloomberg’s campaign in December with a wealth of on-the-road political experience — and a tireless enthusiasm for her candidate, his vision and everything he represents.

“I always used to say, earlier on in my career, that the reason that I did campaigns is because nothing else matched my energy,” she said with a laugh. “Nothing else can tire me out — I’m constantly on the go.” During our 45-minute interview, her phone rings about a dozen times, with colleagues, reporters and news editors all looking for a few moments of her time.

“Back in December, I’d be calling these news desks,” asking them to send reporters on the road with us, Slayen recalled. “And now they’re all calling us. It’s exciting because it’s a sign of our momentum. It’s a sign of the campaign going in the right direction.”

Slayen, a native of Portland, Oregon, is a first-generation American. Her parents — from South Africa and Zimbabwe — met in Israel while playing field hockey at the Maccabiah Games. They settled in Israel, served in the IDF — her father as a fitness trainer and her mother as a “badass” translator for the Air Force intelligence — and had Slayen’s older brother. While her mother was pregnant with her, the family moved to Oregon.

“We grew up with them speaking Hebrew to us,” Slayen recalls. “And I had a weird Israeli name that no one in Portland, Oregon, could pronounce.” And while her family was never religiously observant, they were always heavily involved in the Jewish community and Jewish causes; she attended Jewish day school in Portland, went to B’nai Brith camp in the summers and took part in an American Jewish World Service service trip to Ghana during high school.

“Being Jewish has always been part of my identity,” she said. “We’ve never been religious in any way… but we’re culturally Jewish in a lot of ways, and very Israeli-style just in every aspect of life.”

Since 2012, Slayen has made a career of being on the go with politicians across the United States. But wherever she ended up, she found comfort and familiarity by connecting to the local Jewish community or to fellow Jewish staffers amid the hectic pace of campaign life.

“It’s just such an important part — having other Jews on the campaign, on Rosh Hashana or Passover, whatever it is,” she said. “You spend that time together… It anchors you in a certain way.”

Her first official campaign gig was with Christie Vilsack’s unsuccessful 2012 run for Congress in Iowa. In 2013, Slayen joined the team that helped elect Terry McAuliffe governor of Virginia. In 2014 she tried to re-elect Kay Hagan for Senate in North Carolina — where she recalled attending Kol Nidre services on Yom Kippur — and in 2015, she campaigned for Andy Beshear for attorney general in Kentucky — where “I did not find a strong Jewish community!” After that she headed to Florida in 2016 to join Rep. Patrick Murphy’s failed bid to unseat Sen. Marco Rubio.

In 2017, she was hired as the communications director for the Illinois gubernatorial campaign of J.B. Pritzker, who defeated incumbent Republican Gov. Bruce Rauner in 2018.

With Pritzker, she said, “I was so excited to have my first Jewish candidate. Having done this for so long, just having that connection” added a new layer of meaning, Slayen recalled. “With Donald Trump being elected in 2016, with a divisiveness in our country, with the rise of antisemitism, having a leader who is Jewish and showing that antisemitism cannot get in our way, I think is really important.”

In late 2018, Slayen held conversations with officials close to Bloomberg when he was considering entering the presidential race. But at the time, the former New York City mayor opted not to run, and Slayen reassessed the state of the election. She ultimately went to work for Montana Gov. Steve Bullock’s presidential campaign, heading out on the road with him across America.

“He had a great message about winning back places we’ve lost — about making sure we’re focusing on red states,” Slayen said. “We had so much fun [on the road]. He’s just a good-hearted, good-natured person.”

Unfortunately, she said, his campaign never quite got off the ground, and he dropped out of the race just a week after Bloomberg reversed his earlier decision and opted to throw his hat in the ring.

“Maybe it was fate,” she said. “The timing was just incredibly serendipitous… they scooped me right on to the campaign.”

Soon enough, she was back on the road with Bloomberg, traveling from Texas to Tennessee, Oklahoma, Virginia, North Carolina and more. While the hours on the road can be grueling, she said, the 78-year-old Bloomberg has demonstrated unflagging energy along the campaign trail.

“I remember we did a day where we went to three different states,” she recalled. “We had a press plane, so we had 10 reporters with us, and we were in Minnesota, Illinois and Ohio. And at the end of the day in Ohio — he’d just done a huge gaggle of reporters — he goes, okay, what state do we go to next?”

In news profiles and interviews over the years, Bloomberg has been described as unpredictable, short-tempered and vulgar. A recent Washington Post article detailed a series of lawsuits and complaints against him by women employed by Bloomberg LP. Those allegations and his past comments about women were a key part of Sen. Elizabeth Warren’s attacks on Bloomberg during his debut debate performance last week, and again last night. But that is not the Bloomberg Slayen has experienced.

“Those stories, they’re from the year I was born,” Slayen said. “They are old stories that have been talked about a lot.” From her personal perspective, she said, “I am proud to work here. I’ve been nothing but empowered.”

“It’s easy to look at an old comment… where he may have said something that people find untoward,” she said. “I think at the end of the day, his intention is that he cares and that he wants tikkun olam. He wants to make the world a better place.”

What the press does not always capture, Slayen asserted, Is that “even when he seems so data driven, and he doesn’t seem like he cares, he does care… All of the philanthropic work he’s done, everything he did as mayor, even in his business, democratizing data — everything he has done is to help people.”

She is also particularly enthusiastic about working for a man who could be elected the first Jewish president of the United States. Growing up with two Holocaust survivors in her family, she said, “we cannot forget, and we have to retell the stories, and we have to remind people of what happened in the past so that it never ever happens again.” Slayen said that watching the “xenophobia and the divisiveness” emanating from the White House has been particularly frightening.

“You have a president who was literally stoking those flames,” she said. “So for me, being very public and open about the fact that I’m Jewish is important.” And looking ahead, “to have a Jewish president beat Donald Trump — what stronger message can we send?”

Slayen has been on the go with candidates for almost a decade — jumping from city to city and on and off campaign buses and planes. If Bloomberg were to capture the White House this November, would she consider settling down a little more permanently in Washington?

“I always promised myself that when I hit 30, which I am nearing, I would no longer travel,” Slayen said with a laugh. “I would be honored to continue working for [Bloomberg]. I think he has built an incredible team around him… to continue being around a team like that would be an honor.”

Of course, there’s always another option on the table in Slayen’s political future. With her non-stop schedule, she said she hasn’t found much time to visit Israel in recent years. “I’ve always thought maybe I could go help with Israeli politics,” she said. “There’s no shortage of politics and elections there!”

Looking back on her long record of campaigns, Slayen can’t help but notice a pattern.

“Every other year I’ve won,” she points out. And her most recent candidate, Bullock, dropped out of the presidential race before the primaries began. “So we’re up to the winning one,” she proclaimed. “We’re on the winning streak right now.”