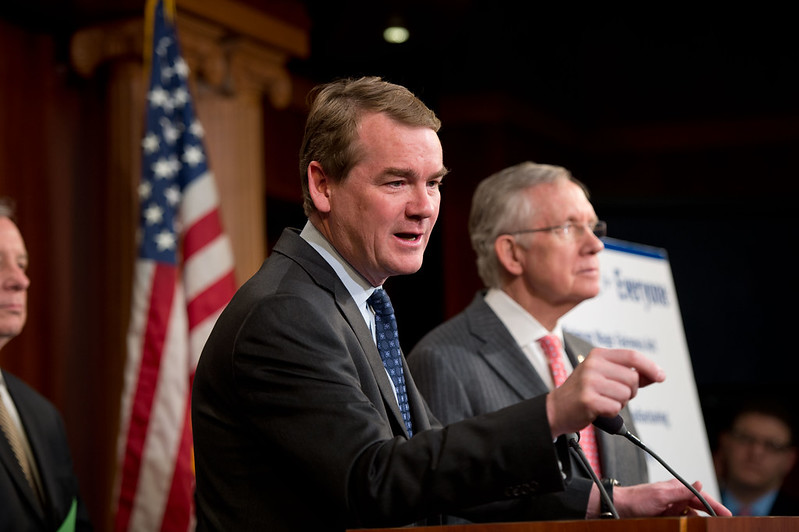 Bennet: America will need to restore alliances after Trump

Colorado Democrat Michael Bennet warned that President Donald Trump has already done lasting damage to global perceptions of the United States, telling Jewish Insider that “every country in the world is going to have to reassess the bargains that it makes with the U.S. as a result of what he’s done in Syria, in Iran and with the Paris climate agreement.”

Speaking to JI after appearing on stage at the annual J Street National Conference in Washington this week, the presidential hopeful expressed his anxiety over the damage he said the president has done to American foreign policy. Bennet said the most common foreign policy question that he’s received from voters is, “How are you going to restore our alliances” after Trump leaves office, a question he says is “an indication to me that people really deeply worried about the instability that [Trump] is creating and the opportunity cost of having somebody with Trump’s view of the world [as President].”

In particular, Bennet praised the Iran deal, from which Trump withdrew in 2018, describing it as “for once an attempt by this country to help manage a problem in the Middle East rather than go to war with it.”

Bennet’s appearance at the annual J Street conference came as the Colorado senator has established himself as perhaps the most vocal critic of the leftward shift of the Democratic Party among the current field of candidates, a stance he thought would pay off. “I just don’t think Iowa Democrats are moving way over to the left,” said Bennet.

A pointed critic of the Medicare for All healthcare plan being advocated by progressive rivals in the Democratic primary, the Colorado senator thought his critiques of the plan were finally having an impact. Voters “understand that the only person who has come up with how to pay for [Medicare for All] is Bernie [Sanders]. I think that’s also giving them real pause and I’ve been making that argument ever since I got in the race and now finding, I believe, a more welcoming audience.”

Bennet extended his critique of the party’s leftward shift globally, although he noted “there has been less focus [on the campaign trail] on foreign policy.” As an example, he argued that “support for the BDS movement is out of kilter with mainstream voters in both parties.”

Bennet has failed to surpass 1% in national and state polls and did not meet the DNC’s criteria to participate in the two most recent televised debates. “Obviously, I wish I were polling better,” he told JI. However, Bennet noted, “The field remains very unconsolidated. The last poll I saw in Iowa had undecideds up by about 10 or 15 points, so I think it is very fluid.”

Speaking Monday in Washington, Bennet broke from Warren and Sanders on foreign policy when he told J Street conference attendees that he would be hesitant to condition U.S. aid to Israel. He noted to reporters that doing so was “a fairly blunt instrument and could be easily manipulated by someone like Prime Minister Netanyahu for his political interests.” Bennet lamented that Netanyahu had “over and over again engaged with the United States in ways that had enhanced his own domestic political interests” while undermining Washington’s ability “to play a constructive role in a bipartisan way in our support of Israel.” He expressed his concern that the current Israeli government “basically has a permission slip from [the] Trump administration to do whatever they want.”

The Democrat from Colorado is confident that his party will have the advantage on foreign policy in a general election. “I think Democrats have such a strong case to make because of how reckless Donald Trump has been and how weak he’s been in the prosecution of American foreign policy and the national defense. I’m quite comfortable that Democrats are going to be able to litigate these issues successfully,” said Bennet.

After all, he argued, the current administration does not have a “particularly Republican view of the world. It doesn’t reflect the foreign policy that we’ve pursued as a country for the past 70 years.”