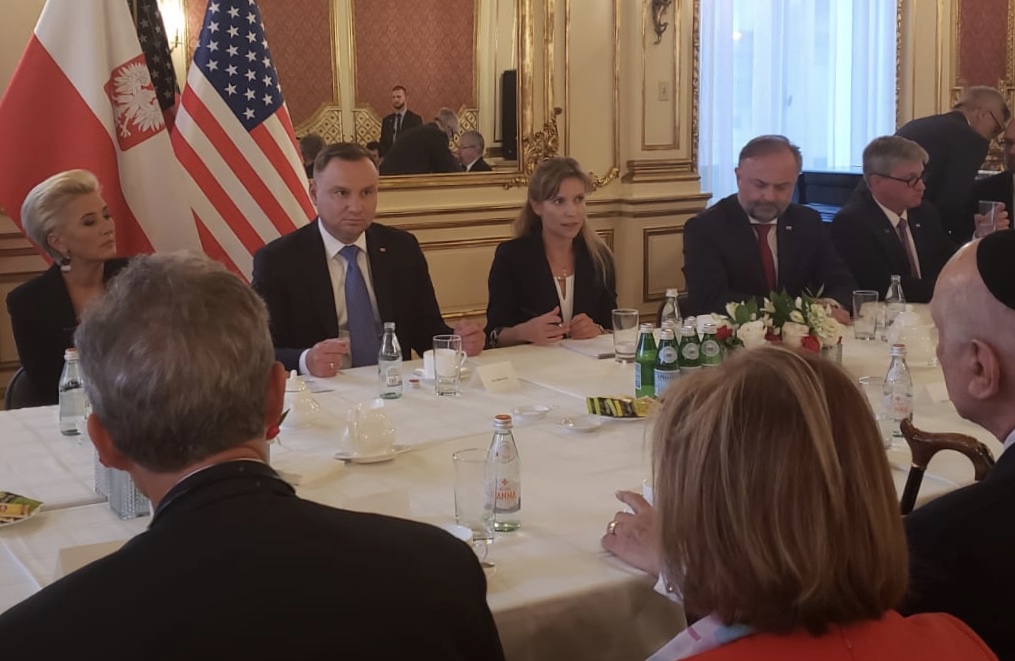 In a meeting with American Jewish leaders at the Polish Consulate in New York on Wednesday, Polish President Andrzej Duda bemoaned what he called Israel’s lack of regret over its assertion regarding Polish participation in the Holocaust.

According to several participants in the meeting, Duda suggested that Israeli Foreign Minister Israel Katz’s comments earlier this year about Polish antisemitism were a “humiliation” and were the reason for an increase in antisemitic attacks against Jews in Poland.

The Polish leader also told the group — which included representatives of AIPAC and the Anti-Defamation League — that people in his country had advised him not to travel to Israel until Katz apologizes for the comment.

A kerfuffle broke out over the president’s comments, according to two witnesses at the meeting who described the scene to Jewish Insider. Holocaust survivor Edward Mosberg, who was recently awarded Poland’s Order of Merit, defended the president’s comments and stated that Israeli Jews “like Israel Katz” are responsible for the rise in antisemitism.

Rabbi Shmuley Boteach, according to the source, cut Mosberg off, saying he couldn’t let his comments go unchallenged.

In early 2018, Poland’s senate passed a law that made it a illegal to assert that Poland was complicit in the Holocaust. The controversial legislation also prohibited individuals from calling concentration camps “Polish death camps.” The bill was watered down — making it a civil offense rather than a criminal offense — after a global outcry. Polish Prime Minister Mateusz Morawiecki canceled a trip to Israel earlier this year after Israeli Prime Minister Benjamin Netanyahu was quoted as saying, “Poles cooperated with the Nazis.”

UPDATE: Robert Szaniawski, a spokesperson for the Polish Embassy in Washington, D.C. sent JI the following statement: “The Embassy of Poland must state, it is not true that the President of Poland Mr. Andrzej Duda said or suggested during his meeting with representatives of the Jewish community in New York on September 25th that ‘Israel is responsible for anti-Semitic attacks in Poland,’ as described by The Jewish Insider. During the meeting, the President did not speak about anti-Semitic attacks in Poland. On the contrary, he emphasized that Poland is a very safe country for Jews.”