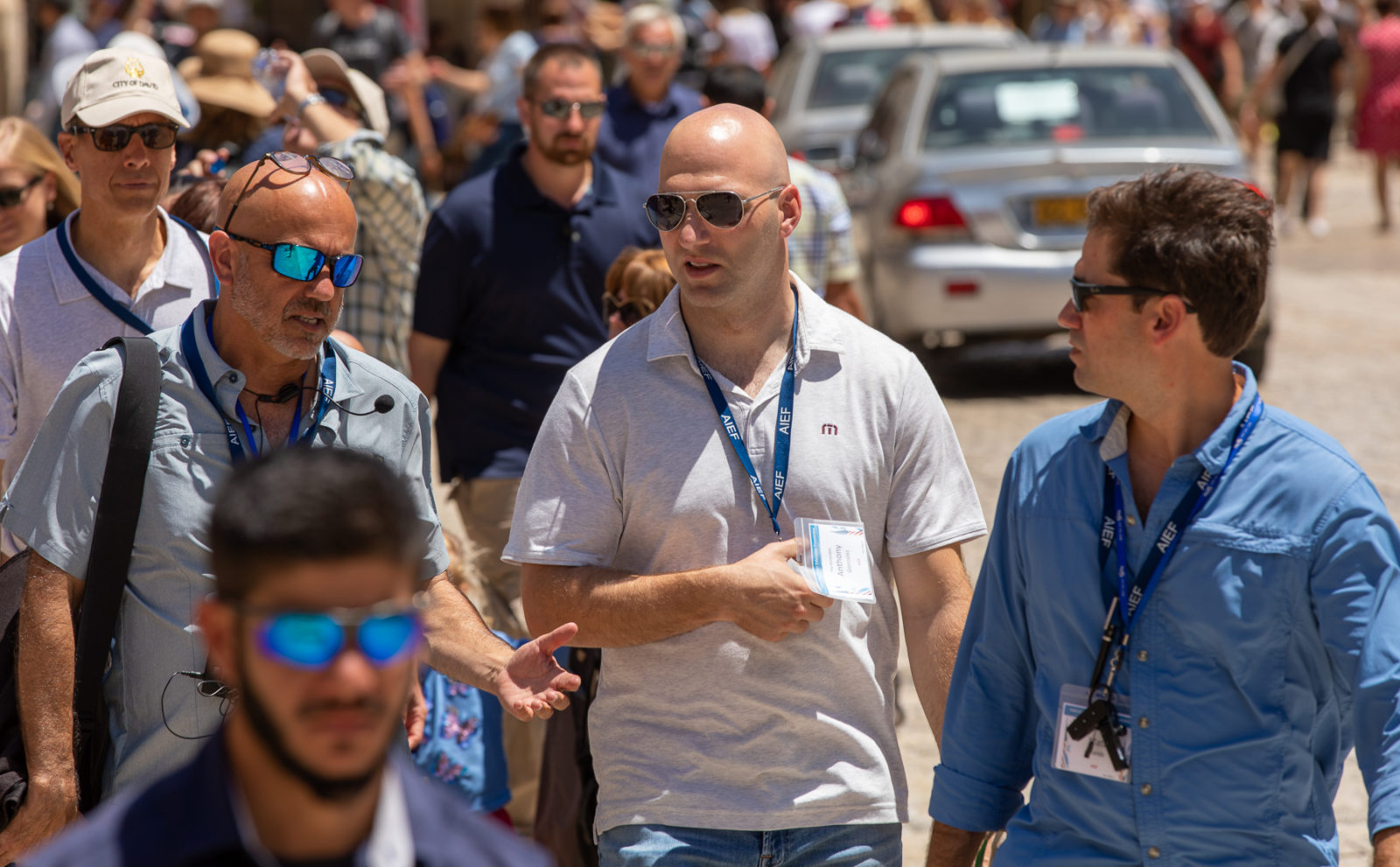 Over the Middle: The Republican receiver pushing bipartisanship

Running his own routes in Jerusalem and D.C., NFL-player-turned Congressman Anthony Gonzalez says parties must work together

Thirty-four members of the 116th Congress previously served as mayors, 161 hold law degrees and 78 have served in the military. Only two are former NFL players. And one of those is Rep. Anthony Gonzalez, a 34-year-old freshman Republican lawmaker from Ohio.

Gonzalez, who visited Israel last week on a trip coordinated by the AIPAC-affiliated American Israel Education Foundation, sat down in Jerusalem with Jewish Insider to discuss his time in the Jewish state, his unorthodox path to Congress, his efforts to reach across the political aisle and his thoughts on the political future of his former teammate, Peyton Manning.

“When I left the NFL I was never sure exactly what would translate to the rest of my life,” Gonzalez told JI last week in the lobby of the King David Hotel. “When you leave something like the NFL, the concern is always that you didn’t develop any skills that translate into the traditional business world, or the non-NFL world.” But in fact, he said, “there are unbelievable parallels, both from a campaign standpoint, but more importantly from [the standpoint of] how to work with people who you may not agree with.”

Gonzalez, the son of a Cuban immigrant father, grew up in Cleveland, Ohio. He played college football at The Ohio State University, and was drafted by the Indianapolis Colts in 2007. In 2012 he signed with the New England Patriots, but was released several months later and opted to retire from the sport, going on to earn an MBA degree from Stanford. In 2018, when a congressional seat opened up in Ohio’s 16th district, Gonzalez beat out two Republicans in the primary and trounced Democrat Susan Moran Palmer in November. Since taking office in January, the congressman has regularly pursued bipartisan initiatives and worked closely with several Democrat lawmakers.

“One flaw of American politics is that we simply do not sit together and talk through issues in a bipartisan way,” he said. “We do that in our silos, and then we come to the House floor and we argue like cats and dogs — it doesn’t make a bit of sense to me, but that’s what we do.” Gonzalez said that more conversations and discussions that reach across the aisle “will ultimately lead to better legislation and better lawmaking.”

One issue in particular that Gonzalez has been working on with a Democratic colleague is foreign election interference. He and fellow freshman Rep. Elissa Slotkin (D-MI) have spearheaded a task force to address the role of foreign agents in spreading propaganda in the United States.

“What we wanted to do was come together as a bipartisan group and push legislation that will hopefully protect our infrastructure and also force disclosure on certain entities who are broadcasting propaganda into our country,” he said, pointing in particular to Russian networks including Sputnik and Russia Today. “These are two entities that are sponsored and controlled by the Russian government,” he said. “And if they’re going to be broadcasting into the country on stories that are pure propaganda, I think they need to disclose who they are.”

Gonzalez said he is confident if and when legislation from the task force comes to the House floor, it will receive widespread support.

“My belief is that this is one of those things that — when you read it and you understand the situation — you ask yourself, how is this not already a law?” he said. “I’m hopeful.”

The freshman Republican spoke to JI just a week after the mass shootings in El Paso, Texas and Dayton, Ohio — a few hours from where he grew up. Gonzalez said he hopes that when Congress reconvenes in September, real action can be taken on the issue.

“We need to have these debates,” he said. “Let’s put everything on the table and let’s work on things that are actually going to solve the problem. There are a lot of bills that we can talk about that will make us feel good, but probably won’t do much.”

Gonzalez added that “the one thing that I can guarantee is: If we do nothing, if we don’t work on our mental health issues, if we don’t have the debate about what sensible laws look like, nothing will change… If we don’t enact solutions, we’re going to be talking about this again in the not-too-distant future, and that’s horrifying.”

The Ohio Republican would like to see progress made on red flag laws, where guns can be removed from people deemed by a judge to be a danger to themselves and others.

“To me it just makes sense that if there is an individual who is threatening, has deep mental illness, is showing all kinds of signs that they are going to commit one of these mass murders, then I think we need to have the system where you are able to take the weapons away from that person and potentially commit them to an asylum of some sort,” he said. “We need a mechanism to step in and make sure that nothing horrible happens.”

And Gonzalez is aware that the issue of gun safety is a critical one to many American Jews, particularly in the wake of two fatal synagogue shootings in the past year. He said he has asked Jewish friends in his district: “‘Do you feel safe going to synagogue? Do you feel secure in the community?’ And the reality is a lot of them don’t right now, and security costs and insurance costs are going through the roof for a lot of our synagogues because of these attacks.”

Gonzalez said it is “shocking that we’re dealing with this in our country in 2019, but at the same time, I believe that we have a cultural sickness that is manifesting itself in a whole host of places. And unfortunately, antisemitism is one of those places.” He posited that there is no “quick fix” to the issue, but “there are things we can do from a funding standpoint to help provide security to make sure that… our Jewish brothers and sisters can worship in peace.”

While Gonzalez has criticized President Donald Trump — calling his attack on “the Squad” last month “wildly inappropriate” — he mostly tries to steer clear of the constant partisan squabbling.

“This job is about making law. That’s fundamentally what my job is,” he said. “My job is to advocate for policies that are going to benefit my district. And so that is what I focus all of my time and energy on. I’m somebody who doesn’t find… the tweeting and the 24-hour cable news cycle to be one that is particularly productive for lawmaking. I actually think it’s a complete disaster.” Gonzalez said he deleted his personal Twitter account from his phone “about a month ago. And I am so much happier. Twitter is a complete cesspool.”

Gonzalez’s visit to Israel this month was his first to the country, and an opportunity he immediately jumped to take.

“The Middle East is a complicated place, and I think it’s incumbent on all members of Congress to understand the issues in the Middle East, understand who our friends are, who our allies are, what the state of play is and how we can partner forward,” he said. “Not to mention that I’ve always wanted to come here for its historical significance, religious significance and geopolitical significance.”

The freshman congressman pointed to the group’s meeting with Prime Minister Benjamin Netanyahu, discussing ways Israel can partner with the U.S. on tech innovation and cyber security, as a highlight of the trip.

“We had a great discussion about where the future of the U.S.-Israel relationship can go,” Gonzalez said of the meeting. “He spoke eloquently about our ability to partner on cyber security, on big data and machine-learning initiatives specific to the intelligence community, but also the armed forces. And that makes perfect sense because Israel is so unbelievably innovative as a country and is so far ahead of the curve… when it comes to innovating on our technological future.”

One area that wasn’t much discussed in the sit down with Netanyahu? Peace or Palestinians.

“We didn’t get into that as much,” Gonzalez said. “We focused primarily on the U.S.-Israel relationship.”

The Ohio lawmaker chose to skip the delegation’s visit to Ramallah after learning that Palestinian Authority President Mahmoud Abbas opted not to meet with the Republicans, despite meeting a similar Democratic delegation a week earlier.

But Gonzalez said he and his wife, Elizabeth, took time to explore the city of Jerusalem and meet average citizens.

“I’ve done that a handful of times throughout this trip,” he told JI. “I went for dinner one night with my wife and then we walked into the shopping areas and just talked to people. And I felt like I got a pretty well-rounded perspective on Israel.”

Gonzalez and Rep. Colin Allred (D-TX) — who was also on the recent AIPAC trip — are the only former NFL players currently in Congress, but could more be joining the ranks soon? Peyton Manning, Gonzalez’s former Colts teammate, contributed to the Republican’s congressional campaign in 2018. And rumors that the legendary quarterback could enter politics himself continue to abound.

“He’s too smart for that,” Gonzalez said with a laugh. “He won’t. He’s not gonna run… he would win unquestionably, without a doubt… he’s an incredible competitor and he’s very smart. So I think he would do very well if he wanted to. But I would put the odds of him jumping into politics at zero.”