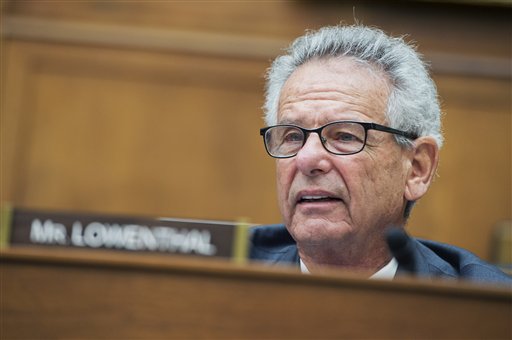 Alan Lowenthal talks two-state solution: ‘Time is not our friend’

No Republicans on board as Ilhan Omar, Betty McCollum join resolution on two-state solution

The only answer to the Israeli-Palestinian conflict is a two-state solution, says Rep. Alan Lowenthal (D-CA). Lowenthal is the lead author on a new congressional resolution affirming U.S. support for a two-state solution. Despite the policy’s general acceptance by previous presidential administrations, it has been absent from conversations surrounding President Trump’s push for an Israeli-Palestinian peace deal.

Lowenthal, who introduced the resolution in April, has garnered over 120 cosponsors, with over half of the Democratic progressive caucus signing on thus far. Among the cosponsors are outspoken critics of Israel, including Rep. Ilhan Omar (D-MN), who signed on this week, and Rep. Betty McCollum (D-MN), who has introduced legislation that would condition military aid to Israel over its policy of administrative detention of Palestinian children. McCollum signed on as a cosponsor in mid-May.

House Republicans have yet to join the resolution. Lowenthal, who spoke to Jewish Insider in late May about his bill, said he believes party politics are keeping this issue from gaining wide bipartisan support.

House Republicans, however, have joined on to a separate resolution introduced by Rep. Brad Schneider that, while condeming the Boycott, Divestment and Sanctions movement against Israel as antisemitic, also says the movement “does not favor” and is “destructive” of a two-state solution. The Schneider resolution has nearly 300 cosponsors.

“I just can’t envision how you can solve this with a one-state solution,” Graham said in an interview with McClatchy D.C. this week.

“I don’t want to get in the way of Jared [Kushner],” Graham told McClatchy, “but I can’t envision a one-state solution. It won’t work. I mean, you’d have to disenfranchise the Palestinians, that won’t work. If you let them vote, as one state, they’ll overwhelm the Israelis. That won’t work. So if you want to have a Democratic, secure Jewish state, I think you have to have two states to make that work.”

President Trump’s Middle East peace team, led by Jared Kushner and Jason Greenblatt, has refrained from endorsing a two-state solution to the Israeli-Palestinian conflict. Last week, U.S. Ambassador to Israel David Friedman told the New York Times that Israel “has the right” to annex parts of the West Bank, worrying certain groups of Israel supporters that the Administration is giving a green-light to Israeli Prime Minister Benjamin Netanyhau to take unilateral measures to decide Israel’s borders.

Logan Bayroff, the director of communications for J Street, a group that supports the two-state solution, said the organization supports Lowenthal’s resolution.

“I think Congress has a huge role here to make clear that whatever the actions and preferences of this particular administration, the long-term interests of the United States and of Israel remain bringing a peaceful and viable end to the Israeli-Palestinian conflict,” Bayroff told JI. “The only way that’s ever going to happen is through a two-state solution.”

Lowenthal said he was spurred to introduce this resolution before the Israeli elections in April, and before the release of the Trump administration’s anticipated Middle East peace plan.

“I’ve recently visited Israel, in the latest trip that I took, which was in February of this year, and I felt like tensions were greater than ever before,” Lowenthal said. “It felt like — we visited, met with people in the Israeli government, spent time on the West Bank, visited Palestinian villages, listened to talks of annexation. And it just struck me as I came back, that it’s critical that time is not our friend. The administration is putting out a proposal which we do not believe will be promoting a two-state solution. Based upon the core principles, where both parties themselves have to be the negotiators.”

The bill, H.Res. 326, explicitly condemns annexation and says that supporting a two-state solution protects Israeli sovereignty and survival as a “Jewish and Democratic state” while also promoting the national aspirations of the Palestinian people.

“A one state solution does not allow… I don’t think would either further the aspirations of the Palestinian people, and the Israelis would have to come to grips – either it would no longer be a democratic society, if they did not provide full citizenship to all, or it would not be a Jewish state any longer,” Lowenthal said.

J Street’s Bayroff said that he believes Republicans will join the resolution.

“We have some hope that in the not too distant future you will see at least some well-regarded Republicans make their positions for two-states a little bit more clear,” Bayroff said.