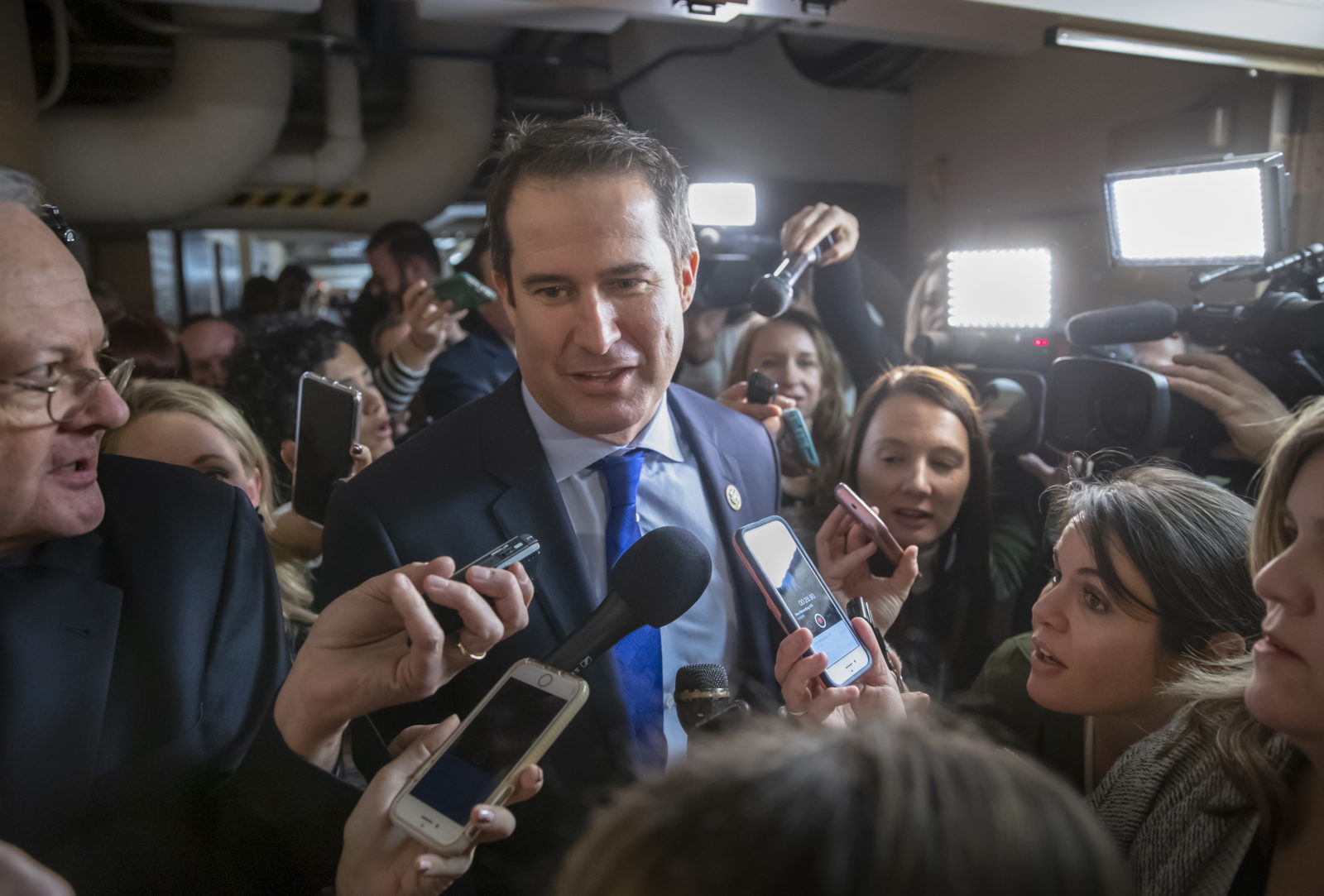 “We’ve got to take Trump on not just as President, but as Commander in Chief”

Last week, over split pea soup at a cafe in Southeast Washington, D.C., Congressman and 2020 Democratic presidential candidate Seth Moulton detailed his views on foreign policy, his approach to Israel and the Middle East, and why he supports a bill against the “abuse” of Palestinian children. The lawmaker from Massachusetts also called out Congresswoman Ilhan Omar for her “antisemitic” comments. The following interview has been edited for clarity.

Moulton on Israel: “Israel is our most important ally in the Middle East and always has been and that’s not going to change. Some people of course think that Trump’s been a good friend to Israel. I don’t equate support for Netanyahu as the litmus test for being a good friend to Israel. I mean certainly what I hear from a lot of people, including many members of the Jewish community here, is that you’ve got to be willing to stand up to Netanyahu. I think that’s part of being an ally, being a friend, is being able to call them out when we disagree with them and they’re not doing things the way we think we should.”

“But I say that as someone who’s, you know, I’ve talked to Netanyahu. I mean, I’ve met with him…I went to his speech in Congress. But I also went to him, when we were considering the Iran nuclear deal. And I simply asked him, I said, ‘look, I don’t think this deal’s perfect. There’s a lot of ways that I’d like to see it, the stronger, more long lasting, etc. But just explain to me how we get to a better deal. Just lay out the roadmap to get to a better deal.’ And he couldn’t. And that’s when I decided to support the deal because look, this is the chief advocate for getting a better deal and he couldn’t even begin to explain how to get there. So that doesn’t bode very well. And I think that’s why you see people like General Mattis who were very skeptical of the deal at first and really pushing for something stronger, ultimately wanted to keep us in it.”

On the Iranian regime and re-entering the JCPOA, the Iran deal: “I don’t know where we’re going to end up with this. I don’t think it’s responsible to take a position now that could very well change as the circumstances evolve down the road. One of the things you learn spending some time in the national security world is that things change all the time. And so it’s nice to have plans and strategies, but ‘no battle plan survives first contact’ is a widely held military phrase. And I don’t think it’s responsible right now given how dynamic the situation is with Iran to lay out exactly the conditions under which I would get back into the deal. We’ve got to use the maximum leverage that we can. And Iran’s an enemy of the United States. And I don’t think it’s a good idea to tell the enemy your plans.”

Asked what his strategy is to contain Iran, Moulton explains: “First of all, make sure that they actually adhere to the Iran nuclear deal. And if that means that we need to get back into it under some conditions or whatever, that should be on the table. Second, we need to keep up our sanctions on things like their ballistic missile program, their support for terrorists, their actions in Syria and everything else. If Iran thinks that it has free rein to do whatever it wants in the Gulf, they’re going to do that because they’re a hegemonic power, they’re an expansionist power.”

Moulton called out the Obama administration for being ‘too soft’ on Iranian aggression: “One of the mistakes I think that we made under President Obama was not responding more forcefully when the Iranians captured our sailors. Don’t forget they captured them. And that’s a place where I think we kind of backed down too much. Iran has actually responded pretty well to a forceful deterrence from the United States. Obviously they did it for a reason, I’m just saying I think that you’ve got to be careful about being too soft with the Iranians. And I think there are times in the past when we have been.”

Moulton called ‘linkage’ naive, the concept that the source of conflict in the Middle East is the Israeli-Palestinian dispute: “I think that’s naive. But I will say that I was struck from the first time I was in Iraq by how much people in other countries do think about this and do sort of see it as this overarching issue. I mean, especially Iraq under Saddam Hussein was a very isolated country and didn’t have a lot to do with Israel and the Palestinians in particular.”

“I mean… there’s, there’s a little bit of an analogy, it’s not a great analogy, but the way Guantanamo just sort of hangs over the U.S. as like a moral cloud and then [Gen. David] Petraeus came out and said, yes, this is something we should get rid of. It’s just not worth it. There’s a certain sense in which it does hang over things more than a lot of people realize. But, I think it’s naive to think that you just solve that problem and all of a sudden the Iranians are just going to start getting along with everybody or, you know, the Saudis are going to start suddenly embracing human rights. I mean…I don’t think that’s going to happen. I think the Middle East is an incredibly complex place. There’s plenty of things that had happened to make it more difficult, but it’s always going to be a complex place.”

JI: When do you think a member of Congress should lose a committee seat? What could a member say or do you that think would warrant that? There have been a lot of calls to remove a certain congresswoman from Minnesota from the House Foreign Affairs Committee after some comments she made. Where do you stand on the role of say, the speaker, and keeping a political party in check. Maybe, has the party as an institution become too weak?

SM: Well, I’m not a political scientist, but one thing, and it’s very clear to me is that the comments that she made were antisemitic and we should have been much stronger as a party in calling her out.

JI: So you think the resolution shouldn’t have been about all hatreds, or hatred in general?

SM: No, I think the resolution should have been much more specific. Now, let’s also acknowledge that some of the response to her comments has been hateful, bigoted, and racist against her. But that doesn’t justify what she said. She’s an elected member of Congress. And it’s her moral responsibility not to be going around and saying antisemitic things and she should have been directly rebuked for that…We should have called out antisemitism very directly in this resolution and rebuked it rather than do a broad thing about hate in general.

JI: When these issues come up, are there specific Jewish leaders that you lean on for guidance on policy?

SM: One of the people I go to a lot is Josh Gottheimer (D-NJ) because I think he’s got a good pulse on the situation and he’s not afraid to speak up. He and I both have a reputation for being willing to speak out and go against party leadership when we think it’s the right thing to do. Including voting for Republican amendments that make sense.

JI: You signed onto this Rep. Betty McCollum bill that has a fairly questionable basis.

SM: Look, the bottom line is, I have long email about this where I laid out my rationale. Let me send you that email. But the bottom line is that we did our homework on this and we think it’s not a questionable basis.

(Moulton’s team sent along this explanation)

JI: Are you going to sign onto the new version? Rep. McCollum reintroduced it two weeks ago.

SM: Actually I didn’t know she’s reintroducing it. What we do with all these things, we do the homework, the research. And I’ll tell you we were approached by some people, at AIPAC in particular, and they said, this is questionable in this and that way. And I’ve gone down the list and refuted their points and explained why I think that they’re wrong about this. So I’m not afraid to take controversial positions if I think it’s the right thing to do. I do not think that Palestinian kids should be abused. And I think we should make a statement about that. But it also doesn’t, as a practical matter, endanger our aid to Israel.

JI: If you had one message to pro-Israel and other foreign policy minded voters about why they should support your candidacy, what would it be?

And that’s why in this race you’ll see that I’m not going to take positions of political convenience. I’m going to take positions that are consistent with the facts, that are consistent with the beliefs that I’ve always held. And I think that’s the single biggest problem we have with Trump. One of the things you learn on day one of Marine training is that you can drop out of a run and you’ll get to try again. You can fail a test and you get to retake the test. But if you lie about anything, you’re gone. Regardless of what aspects of the Trump administration you agree with or disagree with, you just can’t trust the guy with anything he does. And I think that’s the most important thing to reestablish.

But the number one issue for Democrats in this campaign is beating Trump and I think foreign policy is where he’s weakest. I think he’s weakest as Commander-in-chief. This is a guy who got his dad to lie about his feet to avoid service. He’s a draft dodger who’s going to kick off Memorial Day by pardoning war criminals. This is not a strong commander in chief, it’s a weak commander in chief. And if we want to beat him, which I think is going to be much harder to do than many Democrats think, we’ve got to take him on not just as president but as commander in chief. And I’m proud to be in this race to win.