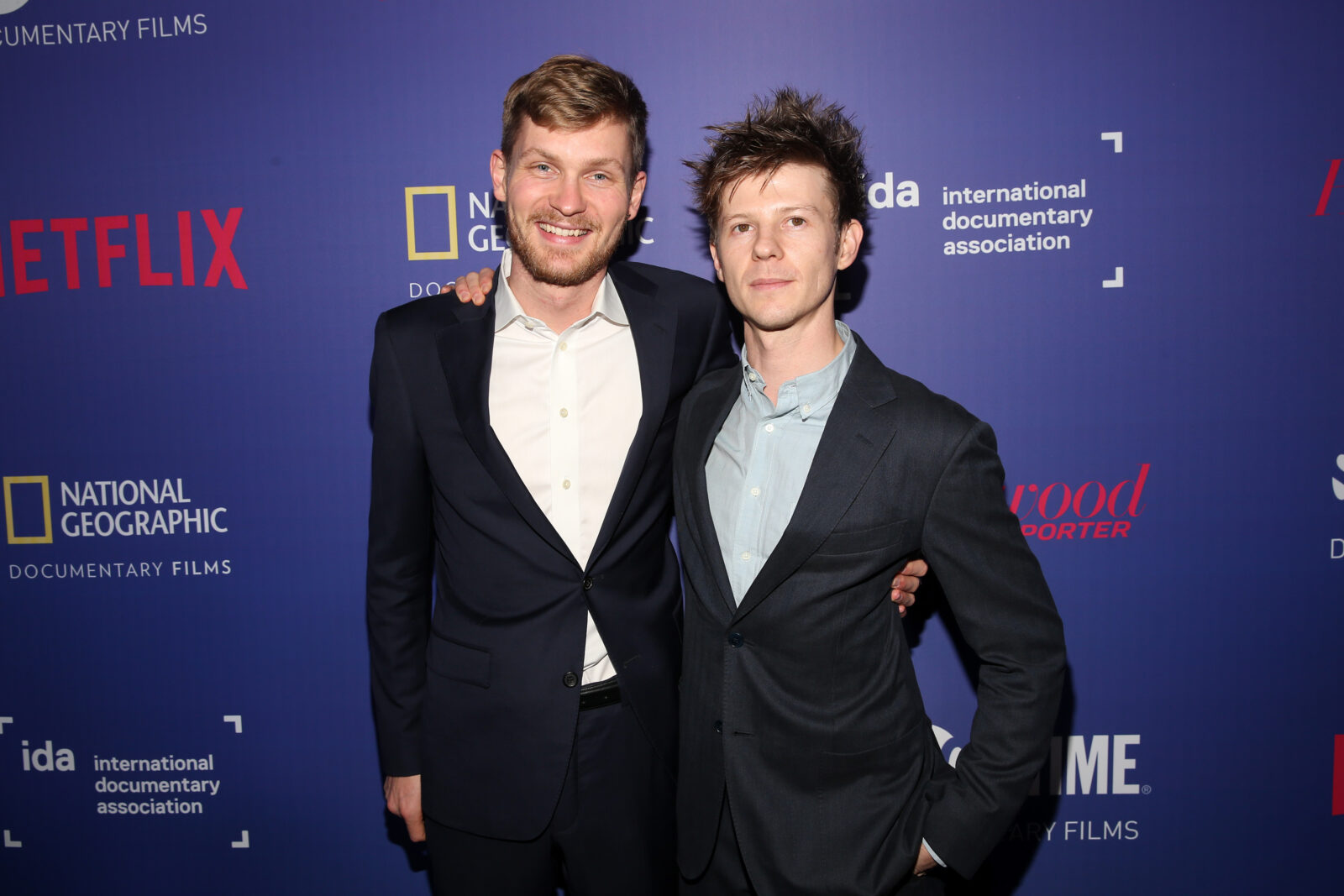 Luke Lorentzen and Kellen Quinn’s latest film, which received backing from Jewish Story Partners, follows a Jewish hospital chaplain as she completes her residency during the start of the pandemic

COVID-19 numbers were spiking, ventilators were in short supply, nurses and doctors were understaffed and overworked, people were dying without loved ones to soothe them in their final moments. 2021, the first full year of a still-lingering global pandemic, would quickly become the deadliest in U.S. history, with big city hospitals like Mount Sinai in New York bearing the brunt of the burden. But through the hallways infused with suffering walked a small cohort of staff, tending to patients by offering an ear or a prayer in lieu of medicine.

Few vocations are as selfless as those that focus on comforting the dying, ameliorating their final days and helping their loved ones navigate the first stages of grief. Amid palliative care physicians and hospice specialists, another medical professional exists, one who caters to the spiritual and emotional more so than the physical, but is just as crucial to their patients: the hospital chaplain.

These individuals, men and women who offer pastoral care to those dealing with trauma, end-of-life diagnoses and other distressing events, offer immense relief to their patients on any day, but none so much as during the first year of the pandemic. Mati Engel felt the force of this need firsthand — her residency in the spiritual care department at Mount Sinai from 2020 to 2021 is the subject of Luke Lorentzen’s documentary, “A Still Small Voice,” debuting this week at the Sundance Film Festival in Park City, Utah.

Engel, a third-generation Holocaust survivor, describes herself as a “practicing performance artist, theologian and spiritual care practitioner” on her personal website. For 93 minutes, “A Still Small Voice” follows Engel — who goes by Margaret to patients — and her supervisor, Rev. David Fleenor, from patient bedsides and fraught phone calls with families of the recently deceased to group processing sessions with other chaplains and solo reflections.

The documentary was not intended as an ode to those worst hit by the pandemic. Lorentzen, alongside producer Kellen Quinn, was introduced to the concept of hospital chaplaincy by his sister while traveling for the pair’s last film, “Midnight Family,” which was released in 2019.

“Claire had come to a screening and was just sharing that she was beginning to do chaplaincy work at a hospital in D.C., and I think there were a few pieces about how she spoke about it that really intrigued me,” Lorentzen told Jewish Insider.

What stuck out to him most was the group processing aspect of the job, where after seeing patients the chaplains would come together and dissect their experiences. “Just from a filmmaking perspective, it sort of provided this structure of action and reflection that intrigued me,” Lorentzen added.

The duo, who together founded the independent production company Hedgehog Films, wouldn’t do anything with the idea until the first peaks of the coronavirus.

Eventually landing on Mount Sinai as the documentary’s backbone, Lorentzen felt a connection to Engel’s approach to the job, and chose her as the film’s center.

“The way she approached the work was with a sort of rigor and intensity that really moved me and fascinated me, and she sort of had this ability to both do chaplaincy at a really high level, while also grappling with certain learnings and learning goals that gave the story all of these different dimensions,” Lorentzen recalled.

“On a more, sort of, religious side of things, the sort of questions that she asks in the film about God’s care or God’s presence resonated with me. I’m not somebody who comes from a religious background and did not begin making this film with a sort of specific religious intention, and the way that Mati lives these big questions of religion’s function or purpose in providing nourishment or hope, felt accessible to me and exciting,” he added.

Engel grew up in a religious family in Boro Park, according to her website, but has since allowed herself to “explore and feel at home in multiple and diverse communal settings.” Hospital chaplains are unique in that they offer care to patients of all faiths and denominations, not just within their own religions — shown explicitly at one point in the film when Engel is tasked with performing a baptism. Quinn is Jewish while Lorentzen is not, but neither of their faiths was a signifying factor in the creation of “A Still Small Voice.” The goal, as Lorentzen expressed, was to “explore the craft of spiritual care, the learnings of doing this work,” and understanding the “different layers of what makes the job hard.” Engel declined an interview request.

Filming began in September of 2020 and ended in July of 2021 — in total, the crew spent around 150 days on-site with Engel and her cohort around the hospital. Funding for the project came in part from Jewish Story Partners, a foundation that awards grants to independent films that showcase the diversity of the Jewish experience. The foundation’s core funder is Jewish filmmaker Steven Spielberg’s Righteous Persons Foundation.

Jewish Story Partners looks for applicants that show “excellence,” according to JSP co-executive director Roberta Grossman, who herself is an award-winning filmmaker, “A great story and people who know how to tell it.”

Lorentzen and Quinn first got connected with JSP before it was created, having met co-executive director Caroline Libresco when she still worked at Sundance.

“I believe when she began working at Jewish Story Partners, we were one of the sets of filmmaking teams that she and her team reached out to,” Quinn said. “At the time, we were just beginning the project and it wasn’t clear that Mati would be actually really at the center of it, but we knew that Mount Sinai was historically a Jewish institution and that we had two Jewish chaplain residents in the cohort, so it immediately seemed like a project that they might be interested in, and then I would say in Caroline’s words, became even more of a Jewish film through the process of making it.”

JSP was formed in April 2021 with money left over from the Foundation for Jewish Culture, an arts nonprofit that had shuttered in 2014 after 30 years. “A Still Small Voice” — at the time known as “Untitled Spiritual Care Documentary” — was among the foundation’s first cycle of grantees in spring  2021. The film recently received a reprise grant within the fall 2022 cycle.

“The filmmakers [behind ‘A Still Small Voice’] have a really fantastic track record,” Grossman said. “In this case, they picked, obviously, a very emotional topic of chaplains entering people’s lives at moments of crisis and offering dialogue or hope, somehow bracketed by ideas of faith, and those are obviously very universal subjects — very important, not often talked about. And we felt that the story was in very capable hands with the filmmakers, and that the story they were telling was very meaningful and powerful.”

Filmmaking does not end once the cameras stop rolling, and for a documentary showing real people at some of their lowest moments, Lorentzen and Quinn were careful not to make light of that sensitivity outside of the hospital as well.

“A real significant but also very meaningful challenge was to build on what Luke and Mati had developed…around really deciding who was appropriate to film with and then how to apply that and bring that into the edit, where the people on screen were no longer right there,” Quinn said. “We had to really think carefully about a way for Luke to be doing his creative work, which involves being very focused and deeply immersed in the material, but also remember that these are real people’s lives, and find a way to go back to them in a way that respected them, gave them true agency, but also balanced the concerns and the needs of the creative process.”

The documentary was a learning experience for the filmmaking team, who left the process with more than just a larger understanding of the medical profession.

“This film, just in terms of process, taught me a lot,” Lorentzen stated. “It’s my second feature, and I think, had a lot of questions as I was beginning the film…and within that sort of, bucket of process, is sort of a question of collaboration, and sort of coming up with a way of making films…learning more deeply and more thoughtfully how to tell true stories with real people. And this film, really pushing those questions in a way that was at times very challenging, but also very central to what I care about as a filmmaker.”

“I think the sort of practice and world of chaplaincy demands a thoughtfulness that was exciting to try and match or learn from,” Lorentzen added.

Quinn drew on the sentiment, touching upon the importance of care-offering as a whole.

“The ways in which chaplaincy can be a model for human interactions in general really emerged for me,” Quinn said. “The value of patience and really trusting that by giving time to processes and to questions, one is more likely to come up with a good resolution or good answer. And I think [film] work is so often built around deadlines, pressures to figure things out, a sort of sense of urgency, it’s very easy to live in a sort of heightened state of like, everything is urgent and must be dealt with right now in making movies. And sometimes that really is true, but I think we were able to really build patience and kind of [take] a breath into how we made the film, and that’s something that feels super valuable to me and I hope comes through in some form or other for audiences.”

Most of all, the duo hopes audiences will be as transformed by the film as they were when putting it together.

“As part of the residency, they do something called ‘small process group,’ where…a feeling is shared and the group is invited to join that feeling,” Lorentzen said. “I sort of think of the film as maybe like  building on that, of David and Mati sort of putting a very open, raw feeling out there for others to join.”

“The process of making the film had that effect on me, like making me a little bit less protective, a little more open, and feeling invited to sort of share life as it unfolds more freely, and finding that very healing. And [I’m] hoping the film can sort of kickstart some of that,” he added.