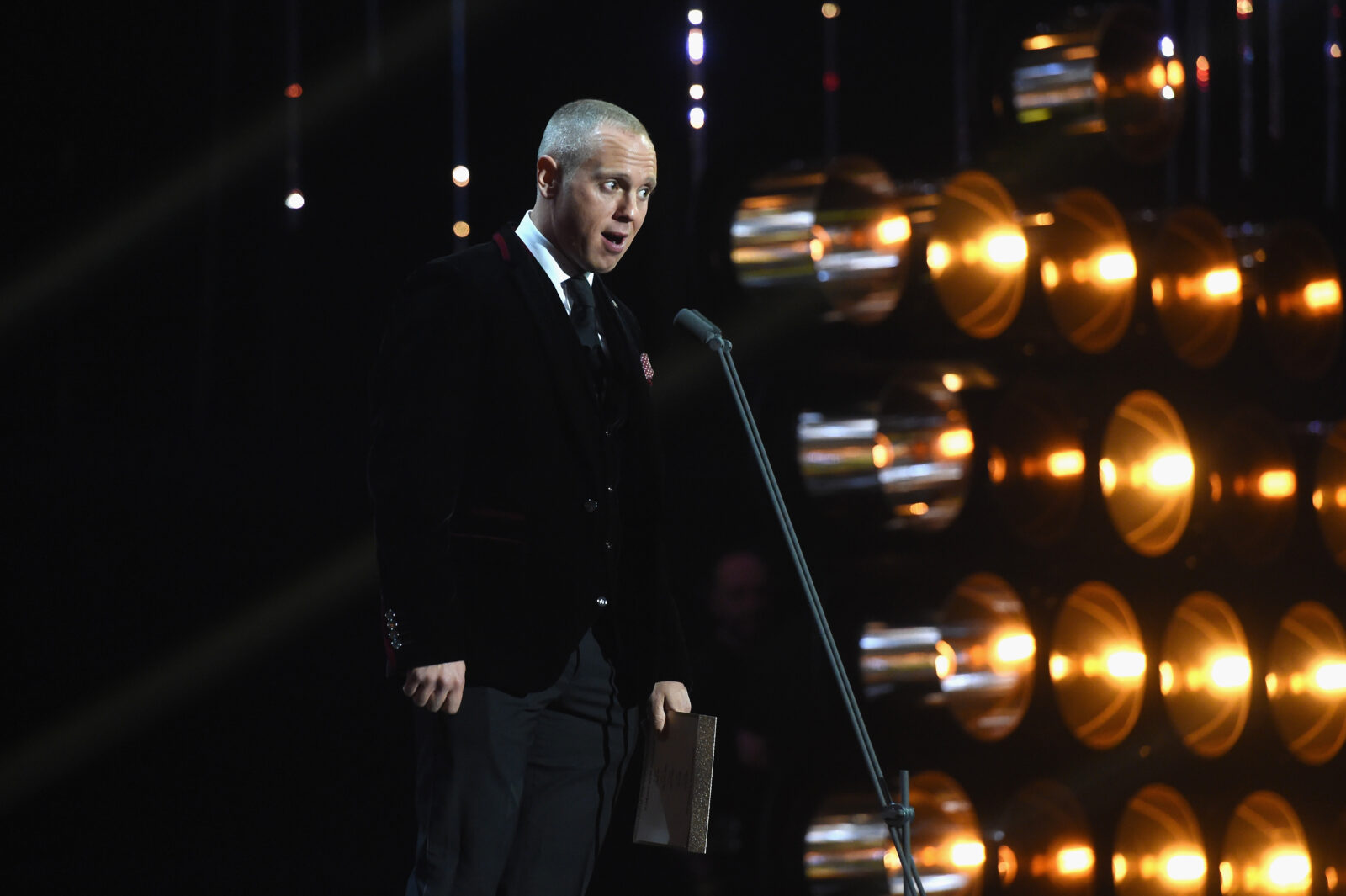 Rinder, known as a popular daytime barrister on the U.K.'s ITV, has sought to connect with his Jewish roots

Robert Rinder — berobed TV judge, popular presenter on a breakfast show and a contestant on the British original of “Dancing with the Stars” — is nearly ubiquitous on Britain’s TV screens. For good measure, he writes an advice column for the tabloid national newspaper The Sun, co-presents the BBC show “Amazing Hotels: Life Beyond the Lobby” and is taking part in a Christmas pantomime, a much-loved tradition in British theater. And on top of that, he runs marathons for charity and has a legal thriller novel in the works.

But Brits got to see another side of Rinder’s essential, sunny optimism in 2018 when he appeared on the British roots-journey show, “Who Do You Think You Are?” That was when he discovered more harrowing details about his maternal grandfather’s Holocaust experience, some of which he knew already when he traveled with him to Poland as a student, seeing a glass factory where his grandfather, Morris Malenicky, had worked as a slave laborer. Malenicky was liberated from Theresienstadt as the war ended, and then joined 300 other young Jews in England’s Lake District, becoming one of the so-called “Windermere children.”

That discovery led Rinder, 44, to dig deeper into his Jewish past. The result, two years later, was a two-part BBC documentary, “In My Family: the Holocaust and Me.” Rinder’s search for stories of his ancestors comes amid an ongoing debate in Britain and America about the position of Jews in the public eye, one made more urgent by the uptick in antisemitism on both sides of the pond. In Britain, that debate has been spearheaded by the 2021 book (and a subsequent TV documentary) by David Baddiel, Jews Don’t Count, which argues that, in a world of identity politics, Jews no longer count as a minority.

Rinder appears to transcend this conversation, because, he told Jewish Insider in a recent interview in London, “I’m not just culturally Jewish. It is the inescapable label placed upon you. But I am also religiously Jewish. I am very publicly proud of being Jewish, and having a Jewish platform and having simcha, or delight, in my Judaism. I’ve never personally experienced overt anti-Jewish racism myself, but have been alongside people who have. I do think, though, that the tragic reality is the sense in which Jewishness is not taken as seriously in the same way as other identities.”

His answer, he says, is to try to introduce people to his faith and hope that they can see the joy he takes in being Jewish — very unusual for a public personality in Britain. In two recent popular TV food shows, for example, one at Passover and a second at Rosh Hashanah, Rinder appeared and spoke knowledgeably about the festivals and why Jews observe them in the way they do. “I love festivals and shul-going and Torah. When I try to share that with other people, it’s always through the prism of celebration and inclusion.”

He recently returned from a quick trip to Morocco, where he had been filming an episode of the BBC show that he co-presents with chef Monica Galetti. But no sooner did Rinder arrive back in the U.K. than he plunged into rehearsals for a Christmas pantomime, where well-known faces pop up in an often slapstick family show. Rinder, to his own amusement, is playing the Mirror in a version of “Snow White.”

Rinder is aware that the more “showbiz” part of his life — he appears daily on “Judge Rinder,” a court show akin to “Judge Judy,” can lead people to watch BBC documentaries with a more serious slant —including the two Holocaust films he made, painful and personal, drawing on his family’s story — one of which pulled in eight million viewers and very positive reviews.

Along with being the grandson of a Holocaust survivor, Rinder’s mother, Angela Cohen, heads one of the U.K.’s foremost survivor charities, the 45 Aid Society. He is also understood to be fronting a major program next year marking Israel’s 75th anniversary by telling the stories, side-by-side, of three British Jews and three British Palestinians. Rinder explained that he strongly believes that “TV has a place in difficult conversations, such as the stories about the building of Israel.”

Because of his abiding interest in the Holocaust and his family connection, Rinder has had a long relationship — one that predates his celebrity — with survivors and the children of survivors.

Harry Spiro, a survivor who came from the same hometown, Piotrkow, as Rinder’s grandfather, first met the adult Rinder during a return visit by the latter to Windermere, the English Lake District village where the Jewish orphans from the Holocaust first arrived in 1945.

“He’s interviewed me a few times at various Holocaust-related events,” Spiro told JI, “and he’s always been very helpful, putting me very much at my ease. He’s not changed a bit over the years. He makes all the time in the world for you. He is a mensch.”

Maurice Helfgott, chairman of World Jewish Relief — the successor charity to the organization that originally sponsored the arrival of the Holocaust orphans in the U.K. — praised Rinder’s combination of “sharp intellect with tremendous energy, great warmth, a sense of humor and genuine preparedness to put himself out for the people and the causes he believes in.”

“He is particularly involved with Jewish causes,” Helfgott added, “but by no means exclusively. I would say he wears his heart on his sleeve. He is extremely good at connecting with people emotionally.”

This was evident earlier this year when Rinder, who speaks Russian, briefly reported from the Ukrainian border with Poland, inspired by the connection he had built with his Ukrainian dancing partner Oksana Platero on “Strictly Come Dancing.” Platero’s family, like many Ukrainians, came under fire when Russia invaded Ukraine in February. Rinder wanted to see what he could do to help — and tracked down the family in Poland, bringing them a wheelchair and medical supplies.

Humanitarian work aside, Rinder has a novel coming out next year, a legal mystery titled The Trial, which he said will be the first of a series. He moaned dramatically about the endeavor, declaring, “Hubris is the answer, I didn’t realize how hard it would be. I have a column in The Sun responding to consumer problems, and I think that’s important for people who have limited access to justice in the U.K. And I like editing other people’s work. So I thought, well, novels are my pleasure, how difficult can it be? The truth is, very difficult.”

Rinder bats aside questions about his ability to juggle his schedule. His TV appearances, he insists, owe much more to the work of production teams. “They do all the work and I just have to turn up,” he jokes, adding, deprecatingly, that the ability to perform “a good cha-cha-cha” on a light entertainment dancing show doesn’t really rate in the grand scheme of things.

But prior to his public appearances, Rinder, who remains an active member of the Bar, had an illustrious legal career, and might indeed have gone on to become Judge Rinder in real life. “I began as a defense counsel, mainly ‘bog-standard’ [routine] crime. Then a very important solicitor spotted me in court, and gradually my practice evolved into murders, and on to cases involving terrorism and eventually defending soldiers in war crimes cases.”

He wrote a legal textbook and then expanded into cases of large-scale fraud, “chiefly for high-net-worth defendants.” In 2010, his chambers — the group of lawyers working in 2 Hare Court — were asked to send someone as an assistant prosecutor to the Turks and Caicos Islands, a British territory in the Caribbean.

“The government was suspended [because of corruption allegations] and it was decided that we [Britain] should reimpose direct rule.” Rinder was sent out to work with Helen Garlick, then with the Serious Fraud Office. The case is now “11 years in,” with one judge dying as the case ground on, according to Rinder, and may not conclude any time soon.

Even with the apparently endless corruption case, the Turks and Caicos were idyllic. Rinder spent time on the beach and, because many of the friends he’d made at university had found success as actors, Rinder used his downtime to write a script. (One such friend, Benedict Cumberbatch, chose Rinder to be the best man at his wedding, and conducted a civil ceremony between Rinder and his then partner.)

On returning to the U.K., Rinder was morosely involved in another case, but admits he had lost motivation for his court work. He pitched his script to Helen Warner, ITV’s director of daytime television. “She read it and gave it her full, aggressively undivided indifference,” laughs Rinder, adding that in fact Warner, who left TV to become a best-selling novelist, later told him it was the worst thing she’d ever read.

Undaunted, Rinder wrote back to Warner and this time she asked him if he was qualified in arbitration, because ITV was seeking someone to front a court show. “To be honest with you, because they were all in television, I just assumed they were talking nonsense. People in television aren’t like lawyers. They spend a lot of time in meetings: one person makes the decisions and the rest simply want to cover themselves with glory when things go well, or absolve themselves of responsibility if things are a disaster.”

Rinder freely admits he didn’t really know what he was doing at the start of “Judge Rinder.” The show was screened in the so-called “dead zone” of weekday afternoons, but became a secret guilty pleasure for thousands of viewers and “captured the public’s imagination.” Rinder’s pithy put-downs and frequent acerbic zingers were greeted with delight, as women lined up to sue their wedding photographers or admitted their secret membership of a vegetable spread society, the Marmiteers. An example of his put-downs: telling a man who had broken the sunroof control on his friend’s car, ensuring that it remained permanently open: “Sir! Your friend once had a car, he now drives a mobile igloo!”

As “Judge Rinder” became popular, the demand for the lawyer’s presence in various unlikely guises grew. He pooh-poohs questions about how he finds time to undertake all the various commitments. “I used to work 120 hours a week when I was counsel. The truth of the matter is that behind the ‘Wizard of Oz’ curtain, very little goes on. When you do TV, everyone else does the work. It’s not really hard work, compared with what so many of my legal colleagues do. It’s a bit like standing by the goal line in football, everyone else does the work and you push the ball into the goal mouth, then everyone says oh, how marvelous you are.”

Rinder recognizes that he is unlikely to appear in court in a jury trial anytime soon, because of fear of prejudice for either the prosecution or the defense. But he now uses his high public profile to promote causes close to his heart: “issues where social activism and law intersect with one another. I especially care about housing, and do what I can to answer consumer questions well; and I still teach a little, too.”