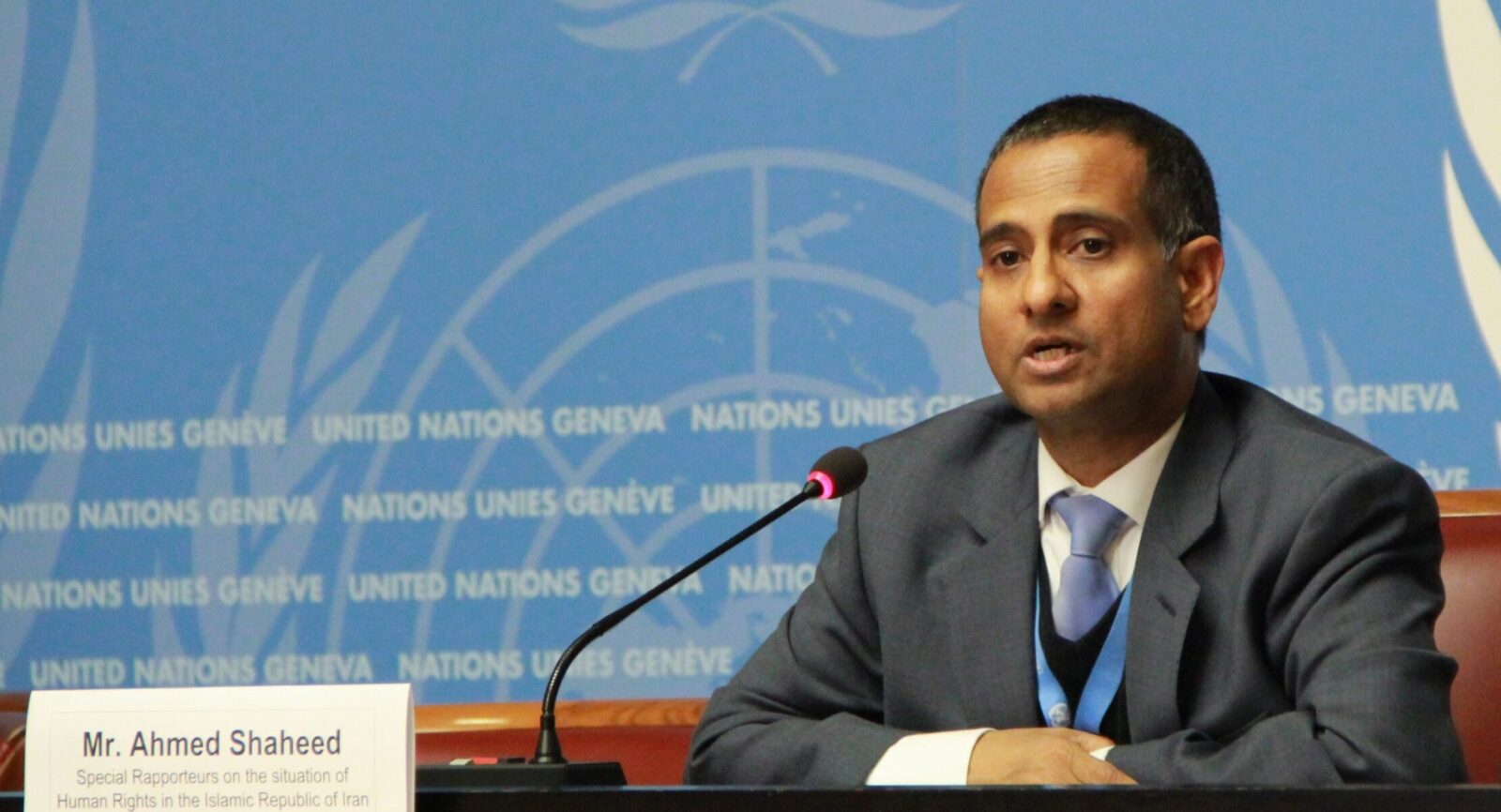 The U.N.’s unlikely campaigner against antisemitism

In his six years as special rapporteur on freedom of religion or belief, Ahmed Shaheed elevated antisemitism as a global human rights concern

For decades, Jewish activists and supporters of Israel have criticized the United Nations for singling out the Jewish state. But in recent years, an unlikely champion for Jewish concerns has emerged in the international body.

Ahmed Shaheed, a Maldivian human rights activist, used his post as the U.N.’s special rapporteur on freedom of religion or belief to shine a light on antisemitism and even criticize anti-Zionism — a major shock to longtime U.N. watchers.

“You’ve got to recognize when changes are being made,” Deborah Lipstadt, the U.S. special envoy to monitor and combat antisemitism, told Jewish Insider in June, citing a report Shaheed published earlier this year with a detailed “action plan” to fight antisemitism.

Shaheed is among the thousands of activists, diplomats and world leaders gathered in Turtle Bay this week for the United Nations General Assembly. But this time, after more than a decade, he’s there as a civilian: Shaheed stepped down from his position this summer to become a professor of international human rights law at the University of Essex in the U.K. He will be replaced by Nazila Ghanea, a professor of the same subject at Oxford.

“I’m not simply somebody who just watches and articulates concern. I am a doer as well,” said Shaheed. In 2019, he released a report that, for the first time, acknowledged antisemitism as a human rights concern at the U.N. Notably, the report discussed the many forms of antisemitism: from neo-Nazis, from Islamists and from people on the left who “have conflated Zionism, the self-determination movement of the Jewish people, with racism.”

“I criticize those who equate Zionism with colonialism, [and] I speak about how that conflation is wrong. That did get some pushback, and I do think there’ll be more of that,” Shaheed said. “A lot of it is the result of ignorance. A lot of people have no idea what is Zionism; people have no idea how to negotiate — how to engage with that discussion about Zionism and anti-Zionism and antisemitism.”

The answer, in Shaheed’s opinion, is for Jews and Jewish organizations to engage with the U.N., even if that work seems difficult. “I think that discussion really has to happen as to, What is Zionism? Why is it important to the Jews? And why is it not the same thing as colonialism? Same thing [with the] apartheid claim as well. I think there should be better understanding of what apartheid actually is and means, and how that the use of that label on Israel is not valid.”

Helping spearhead the global fight against antisemitism is not an obvious fit for a diplomat from the Maldives, a Muslim nation in the Indian Ocean with a population of just 540,000 spread across hundreds of islands. The country is best known globally for its tourism industry, owing to its pristine white-sand beaches and bright blue lagoons.

“I grew up in a country which wasn’t antisemitic to begin with, but then turned antisemitic over time,” said Shaheed. The country and Israel had official ties for several years in the 1960s and 1970s, when Israel was one of the first nations to recognize the Maldives’ independence from the U.K. Diplomatic relations were cut off in 1974, but improved again in the 1990s and 2000s, in part because of Shaheed. When he was the country’s foreign minister from 2005 to 2010, he signed several cooperation agreements with Israel, although they have since been canceled.

“Simply for having signed this agreement, I faced impeachment. It was perhaps the most politically charged event in the Maldives that year,” Shaheed recalled. His elderly father-in-law and mother-in-law faced attacks.

Later, his work calling out human rights abuses in Iran earned him another antisemitic critique from people back home in the Maldives. “The allegation was, you know, I’m a CIA agent, paid by Mossad or whatever,” he said.

When the U.N. created the Iran special rapporteur position, “I was approached by many people, that because I come from a Global South country, from an Asian country, from a Muslim context, that I should step forward for that role,” he said. At the time, “the concern was that we weren’t concerned about the rise of Islamic fundamentalism [and] radicalism in the Maldives.”

Working on the Iran portfolio, Shaheed didn’t feel like he was able to make any systemic changes in a country fundamentally opposed to reform. The country did respond to specific cases that Shaheed raised without changing any laws.

“When President [Hassan] Rouhani came in [in 2013], there was a feeling amongst the Iranian diaspora community that a new approach may be warranted, so that things kind of eased up a little bit,” he said. “But, of course, since then, I mean, there never really was a great line forward.”

After the Joint Comprehensive Plan of Action, the nuclear deal with Iran, was enacted in 2015, the human rights situation did not improve in the country, Shaheed observed. “The lessening of tensions between the West and Iran with the JCPOA actually give them more confidence, I suppose, that they could still stick with their human rights practices,” he said, although he added that he felt human rights concerns should be kept separate from nuclear negotiations — that human rights in a country should not be tied to its security situation.

He called it a “natural move” to go from the Iran position to the one on freedom of religion. “Monitoring Iran for six years, again, further reinforces the point that religious freedom is fundamental to this space, to enjoy other human rights,” said Shaheed. And “as an academic, I’m always looking to critique things, question things, and not take what people say at face value. So I’ve had a lot of time in my my life to look at and read up on antisemitism.”

He wants his colleagues and others in the human rights community to start having difficult conversations about Israel. For instance, Shaheed included the International Holocaust Remembrance Alliance’s working definition of antisemitism in one of his reports, “but now I’m finding a huge pushback on that,” he said, due to the way the IHRA definition describes anti-Zionism as a tenet of antisemitism.

“How many of us unconsciously singled out Israel,” he asked, “when you wouldn’t do that to somebody else, to something comparable? That is such an in-built culture that you pull out Israel first, I knew we totally ignore similar sort of things elsewhere. And what that means,  people don’t really fess up to.”

In his work on freedom of religion or belief, Shaheed sought to build coalitions across religious communities, “rather than simply people lobbying for their own kinfolk,” he said. “I also wanted to platform unheard voices. You can see certain voices always dominant in the space, almost hegemonic voices. And you’ll see others not so included in this. So I saw Jewish groups almost not engaging with the mandate.” The only area where he saw Jewish groups engaging with the U.N. in a significant and positive way was related to Holocaust memory and restitution.

“I think that that growing engagement with Jewish concerns and Jewish communities is something that I would say is quite recent,” Shaheed noted, but he expects it to continue. “I don’t think that other rapporteurs who follow me will disengage from this subject, and there are reasons for that.” It helps that he leaves them with an action plan to follow. Other U.N. officials have joined him at events he’s organized related to antisemitism, such as on Holocaust Remembrance Day.

This, Shaheed said, is what he is most proud of: bringing people together. “You can’t just have one person safe while the rest are not.”