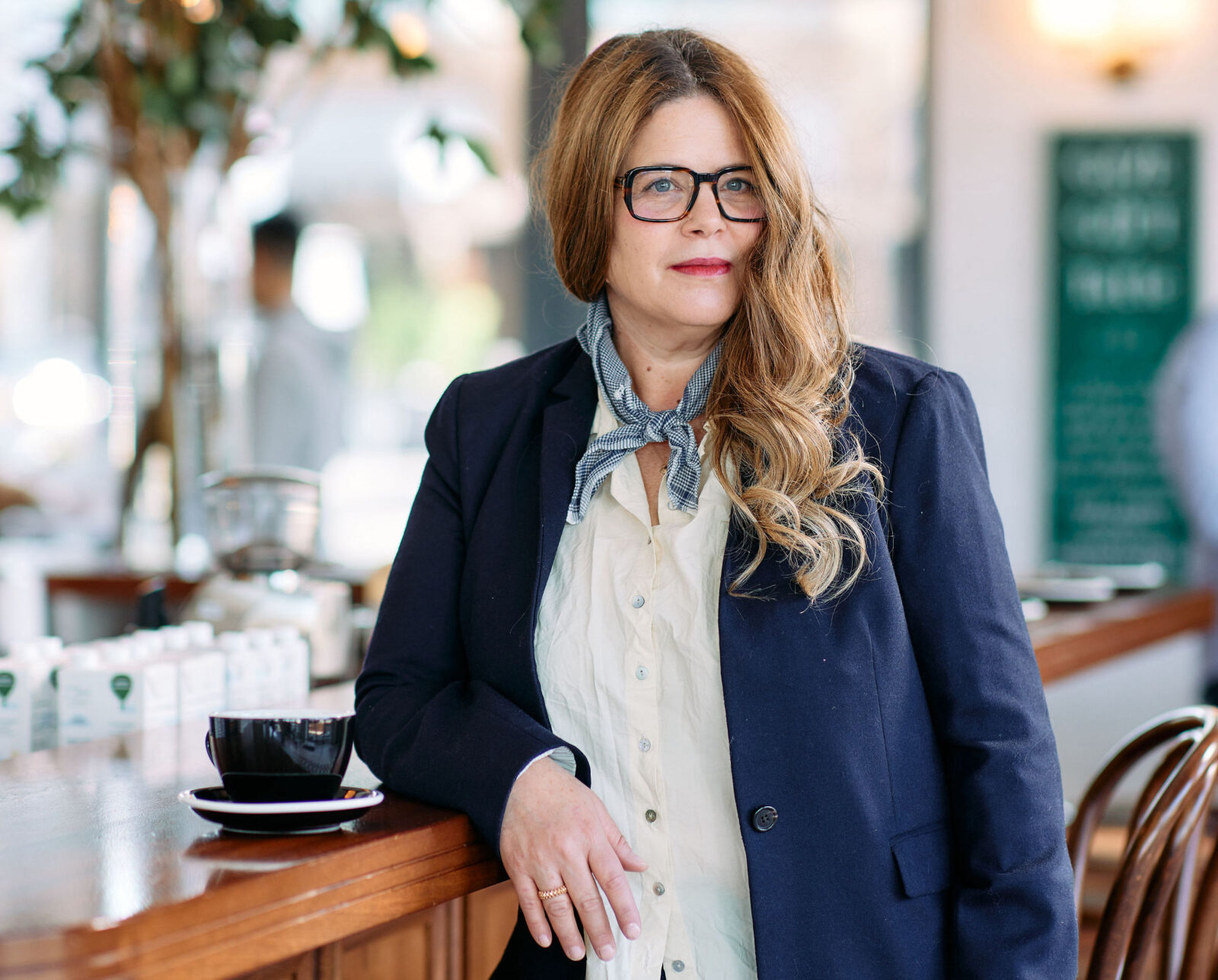 Tatte founder Tzurit Or learned to bake with her mother, who worked in the kibbutz kitchen. She never had food out of a box until she moved to the U.S. as an adult

From the minute that Tatte, an all-day Israeli café, opened in Washington, D.C.’s West End neighborhood, the line was out the door and down the block.

It was the summer of 2020, and customers wearing masks would wait in the long queue — six feet apart — to order a fresh pastry, like a halva brownie or a pistachio croissant, or to try one of the restaurant’s signature Israeli dishes: shakshuka, maybe, or a roasted cauliflower pita. In the two years since the West End opening, six more locations have opened in Washington, Arlington, Va., and Bethesda, Md., with two more set to open over the next few months.

“D.C. knows how to enjoy Tatte,” the cafe’s founder, Tzurit Or, told Jewish Insider over shakshuka at the chain’s Newton, Mass., location, near her home. Ten years ago when Tatte began selling the egg-and-tomato dish, “no one ever heard of shakshuka,” she claimed.

Before becoming the hottest spot for lunch meetings and afternoon coffees for Washington’s political set, Tatte (“like latte,” coffee cups and branded T-shirts remind customers), started as a farmers market stand in Boston’s Copley Square in 2007. But its true origin story can be found on the shores of the Sea of Galilee, at Kibbutz Kinneret, where Or grew up.

“I didn’t learn to bake. It’s the way I was raised,” Or said. Her mother baked all the time, including for the kibbutz dining room, and instilled in Or a deep-seated aversion to ever bringing a store-bought dessert to a party. “I didn’t eat any food out of a box until I got here,” she said of the United States.

Tatte is Or’s first time turning her baking into a capitalist pursuit — quite a change from the communal kibbutz ethos of her childhood — but she always baked on the side, both in the Israel Defense Forces and during several years working in film in Tel Aviv.

“I even baked in the army. It wasn’t my job,” Or recalled. “I was in charge of a group of soldiers. We were in the Golan Heights. It was cold, it was snowy. We just came back from four weeks in the field with no showers.” So of course, when they returned, Or baked for her unit.

In Tel Aviv, Or first worked on commercials, followed by several years making documentaries that took her around the world. Even then, she baked: “If I had visitors, I always baked. It’s a mindset,” Or said. “It never occurred to me that someone would bake for me.”

When she moved to the U.S. in her early 30s with her now ex-husband, Or did not have a grand vision of bringing Israeli cuisine to American diners. She was simply following him to the place he had called home since he left Israel as a child.

“I didn’t intend to build an empire,” Or said with a laugh. “It was really about finding a sense of place, building something of my own.” In the beginning, her goal was simple: She wanted to build a community, to create a place to go where she could see the same people over and over again, to get to know them and learn their favorite baked goods.

At the farmers market, Tatte sold brioche, cookies and nut boxes, all of which are still available at locations today, along with a much larger menu. Or’s life was consumed by round-the-clock baking and caring for her daughter, then a toddler.

Her daughter inadvertently came up with the name. Or was trying to create a logo for her first farmers market stand, and her then-18-month-old happened to point to a photo of her grandmother and say, “Tatte, Tatte!”

In Yiddish, “Tatte” means “daddy,” but Or said it’s common for young Hebrew speakers to say “Tatte” before they can fully say the word “Savta,” which is Hebrew for “grandma.” (In 2009, when Tatte’s products were sold at Dean & DeLuca’s in New York, Or remembers walking into one of the markets and seeing her grandmother’s face on the logo: “I was like, ‘Oh my God, what did I just do?’”)

A customer at the farmers market began to look for a place for a Tatte café. “He said, ‘We want Tatte seven days of the week,’” said Or. (At the time, she was only selling her baked goods twice a week.) “Until then, it had never occurred to me.”

The first brick-and-mortar Tatte opened in Brookline in 2008, and the café chain now has 19 locations in the Boston metro area with a 20th set to open later this year. Or never expected this, and at first it was just because of the logistical near-impossibility of opening even that first shop: “Starting anything in America as an immigrant, it’s so hard,” she recalled.

“As much as Americans tend to think they’re welcoming, they’re not,” Or noted. “No one wanted to lend me money or help me. I didn’t know anyone. The first Tatte I built with 18 different credit cards, because no one wanted to — they just heard the accent on the phone, they wouldn’t even take the call.”

Eventually, her luck changed, and Tatte began to blend in with the Boston landscape, like cannolis in the North End and Irish pubs in South Boston. Early on, Tatte just served baked goods before beginning to offer a full-service menu. Even now, many Tatte employees, let alone customers, are at first unfamiliar with its Israeli ingredients and some of the Hebrew words, things like “bourekas” or “shakshuka.”

“Two years ago, we added to our locations, where you walk in and you have the glossary of Tatte. So, What’s halva? And what’s shakshuka?” Or explained. “As a guest, we want it to be more approachable. We don’t want you to be afraid of our food.”

For staff, the education is more involved. New employees watch a video explaining “a little bit about the kibbutz,” said Or, “and how humble it is.” Staff also have to learn the intricacies of preparing Israeli food, something that is second nature to Or, but foreign to an American chef. “For me, it’s obvious how you hold the pita, how you stuff the pita. It’s a whole street language in Israel,” said Or, one that her employees usually do not know.

In the summer of 2020, Or faced criticism from Tatte employees for not properly disciplining managers accused of racism and for not doing enough to promote employees of color. That same summer, she stepped down from her position as CEO into a new “chief creative officer” role, a transition that she said had been in the works even before the accusations emerged.

At the time, Tatte pledged to match employee donations to organizations affiliated with the Black Lives Matter movement, donate leftover food to anti-racism protestors and diversify the company’s executive team. One Tatte employee said in 2021 that the company had since put safeguards in place to better protect employees from racist or otherwise toxic behavior. In conversation with JI, Or declined to speak about the events of that summer or any changes that followed.

Although she no longer serves as CEO, Or remains heavily involved in all things Tatte, including the chain’s expansion to Washington. (She is also the chief baker, creating and taste-testing new recipes to perfection.) Or fell in love with the city the first time she visited six years ago, years before she considered opening Tatte there.

“For me, I have to get to know the neighborhood, the people, so I spent a lot of time there before I made the decision,” she said. “My first visit, I said, ‘D.C. will understand Tatte.’”

She was right. Tatte “doesn’t necessarily have to be translated for them,” she said of Washingtonians. In 2021, the readers of the lifestyle magazine Washingtonian voted Tatte the city’s best bakery.

Or usually stays in Georgetown when she visits Washington, but “I love Dupont, I love West End, I love Shaw. I love all of it. I would probably live in any of them,” she said, acknowledging that a move to D.C. is not off the table. This neighborhood feeling is crucial as Tatte expands in the region: She wants to build in places where people live so that Tatte can feel like a local establishment.

The expansion has not been without road bumps. A sign announcing a new Tatte recently went up at a storefront near 14th and U Streets NW, the heart of the city’s nightlife district and a popular neighborhood for young people. But the café probably won’t open until next May because Tatte doesn’t yet have the capacity to do the baking that’s required to serve that location.

So is the next stage a Tatte in every suburban strip mall in the country? Ron Shaich, the founder of the ubiquitous fast-casual restaurants Panera and Au Bon Pain, is a major investor in Tatte. But Or insists that isn’t what she wants.

“Many people don’t know the story of Tatte, don’t know that Tatte was not created to make money. I didn’t create it as a business. I really humbly needed a place to go every morning to do work and start to build a life here,” Or acknowledged. “I always say that if I knew it would be that big, I probably wouldn’t have done it.”

What she wants is what she has gotten in D.C.: “People walk in and exactly know what we’re here to do for them,” she said. “I will never forget that feeling. I felt real there.”