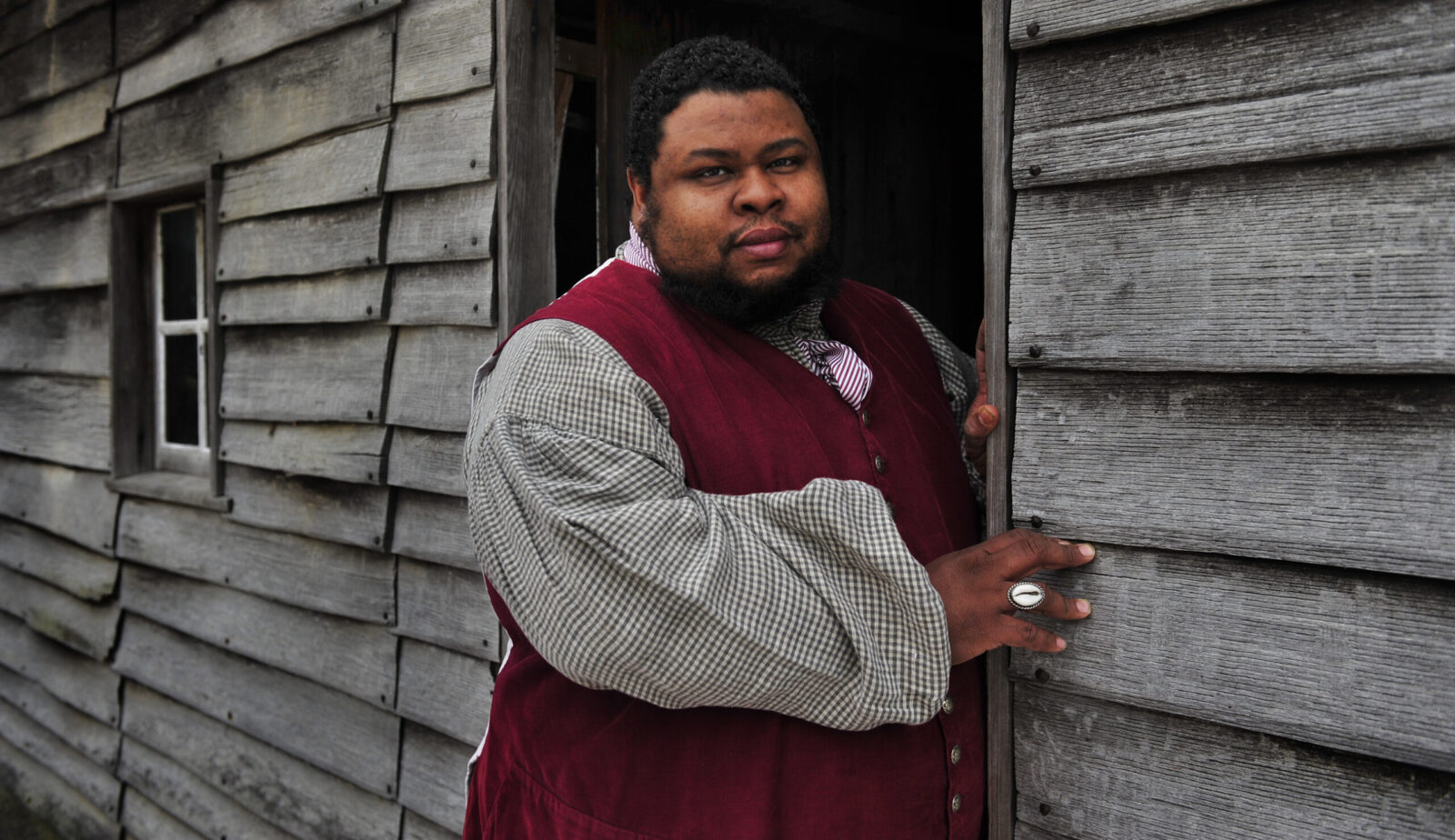 In the kitchen with Michael Twitty’s ‘Koshersoul’

Recipes that fuse cooking, culture and identity are just the beginning of the story for the award-winning food writer

Sit down at author Michael Twitty’s Shabbat dinner table, and you might be served old-school kasha varnishkes reminiscent of the Pale of Settlement, his signature collard greens (made with schmaltz — chicken fat — rather than lard or bacon grease) and brisket flavored with berbere, an Ethiopian spice.

For the James Beard Award-winning food writer and recipe developer, this is standard holiday fare, even if it’s a combination that has probably never been replicated at another Jewish table. This mix of cuisines and cultures is Twitty’s calling card: He calls it “Koshersoul,” which is also the name of his latest book, which is part-memoir, part-ethnography and part-cookbook, exploring the stories and culinary traditions of Jews of color.

“Recipes are nothing compared to the real story of why the dishes came to be and why people enjoy them, why people pass them and people share them, why people incorporate them into their hospitality and generosity,” Twitty told Jewish Insider in a recent interview. He gets into all of this in Koshersoul: The Faith and Food Journey of an African American Jew, out today. The book features an exploration of Twitty’s own background and his attempts to understand how Black Jews fit into both the Jewish tradition and the African American tradition — told through long conversations with friends, thought partners and mentors.

“Why don’t I just talk to my readers as if they are coming to help me make a meal?” he explained of his approach in the book. He wants readers to feel like they’re in his kitchen, too: “We are preparing the vegetables, preparing the fruit, doing a mise en place at the kitchen table, and we just happen to have a conversation that could go on forever.”

Twitty, who grew up (and still lives) in the suburbs outside of Washington, D.C., converted to Judaism at 22. He has spent the past two decades navigating those two once-separate identities — Black and Jewish — that he has fused in his life.

“When I go into the kitchen to make my unique brand of koshersoul food, all of it goes with me,” he writes. “Food has been my primary lens for navigating my citizenship within the Jewish people and my birthright as a Black man in America.” The book both celebrates Jews of color and says to Blacks who are not Jewish, and Jews who are not Black: We’re here, he argues, and we fully belong to both communities.

Twitty’s first book catapulted him from the sidelines, where he was an enigmatic and exciting, if little-known, food writer and blogger into the culinary big leagues. His 2018 The Cooking Gene explored African American culinary history in the American South, and earned Twitty widespread acclaim.

But his connection to cooking began in childhood. Being in the kitchen “was the one set of chores that I could do that I loved, and it was also a place where I bonded heavily with my mom, my grandmother and my dad,” Twitty recalled. “It was a place of bonding and caretaking, and laughing and joking and dancing and people getting their hair done. And prayer circles, I mean all of it.”

His mother grew up in Cincinnati, where she was familiar with the city’s tight-knit and prominent Jewish community. “One of our predominant foods growing up every week was challah. Absolutely no religious connotations at all. It just tastes good,” said Twitty. They’d often use it for French toast topped with apple butter or peach preserves.

Part of what shaped his love for food, and his interest in Judaism, was “growing up in a multicultural community,” where, he added, “I had my fair share of brisket and kugel and matzah ball soup.”

He began to explore his passion for food professionally when he was still in school, interning at the Smithsonian Folklife Festival. He met mentors such as Joan Nathan, the quintessential Jewish cookbook writer. He took from the Smithsonian’s annual celebration of folk cultures in the U.S. and around the world the lesson that he could be a “community scholar.”

He saw that role as a directive to “learn how to document academically your own people’s narrative and story. Because let’s face it, not everybody’s culture will be documented by somebody else,” said Twitty. “Even if it is, it’s not from our perspective.”

In Koshersoul, Twitty documents his own experiences as a Black Jew, and offers something between an academic and cultural study of the community. He tries to break down the tendency to view Jews and Black people as wholly separate groups — the historic “Black-Jewish partnership” of the civil rights movement, for instance, as if there were not Black Jews at the time — and draws parallels between Black and Jewish culture in ways that someone who is only Black or Jewish might miss. Yiddish is not “bad German,” Twitty writes, and Ebonics, or African American Vernacular English, is not “bad English.”

Still, Twitty realized that he had a lot to learn when he converted to Judaism. “You go on a rabbit hole, a real rabbit hole, not the internet rabbit hole,” he said. He read synagogue sisterhood cookbooks, and cookbooks that “go into deep dives” of particular places like Hungary or Morocco. He internalized the “understanding that you will never, ever, ever replicate a recipe.”

Often, he’s come up with his own, whether that’s merging flavors from around the Jewish world or thinking of creative substitutes to make a dish kosher, like matzah meal fried chicken for Passover. “I got really excited when I figured out, Oh, I can take kosher lamb bacon and I can make the kind of baked beans that I grew up with,” said Twitty. (He admits that not everything can be made kosher: “There’s no translation for fried shellfish.”)

Judaism always felt like a natural home for Twitty. “I needed a place where learning and relearning were compulsory parts of spiritual and everyday practice,” he writes, but adds, “I still had to fight to prove my legitimacy.”

The Jewish response to his koshersoul style has mostly been positive, Twitty noted. People are excited “to try something new,” or to finally get to taste a dish that is usually not prepared in a kosher manner. But not everyone buys into it. His book tells the story of the wife of a friend for whom he cooked his kosher collard greens, who berated him for bringing what she viewed as a dirty, unhealthy dish into her home.

He started hearing from Jewish community members concerned about racism during the summer of 2020, following the murder of George Floyd. “What infuriated me during that time was the constant barrage of calls I got, [compared to] three years before that, when I still had two feet in the world of Jewish education,” said Twitty. “I remember suffering through the Obama years, constantly hearing things like, ‘Obama is an Arab. He’s a Muslim terrorist,’” said Twitty. “These are people who I trusted, who I thought had some common sense.”

Despite some of these frustrations with the Jewish community, Twitty hopes Koshersoul will be received warmly by his fellow Jews, but fears the Black community might not have the same response. “To be honest with you, I’m gonna have to work a lot harder to market this book with fellow African Americans,” he noted. “There’s a lot of ‘othering’ that goes on. ‘You’re not really … How Black can you be if you’re Jewish?’”

There are people who expect him to talk about Israel, which he usually avoids or mentions in a cultural context, so they skip out for that reason. “If I’m too overtly intersectional about being Black and Jewish,” Twitty added, Black student organizations often opt not to come. “There is an assumption that I’m going to try to change their minds on other issues that are political.”

What’s gratifying over the past few years, said Twitty, is hearing from former students who are now young adults, who are reaching out to thank him for what he taught them when he was their Hebrew school teacher.

“This is why we need to know each other, to grow from each other,” said Twitty. “Otherwise, we’re never going to change.”