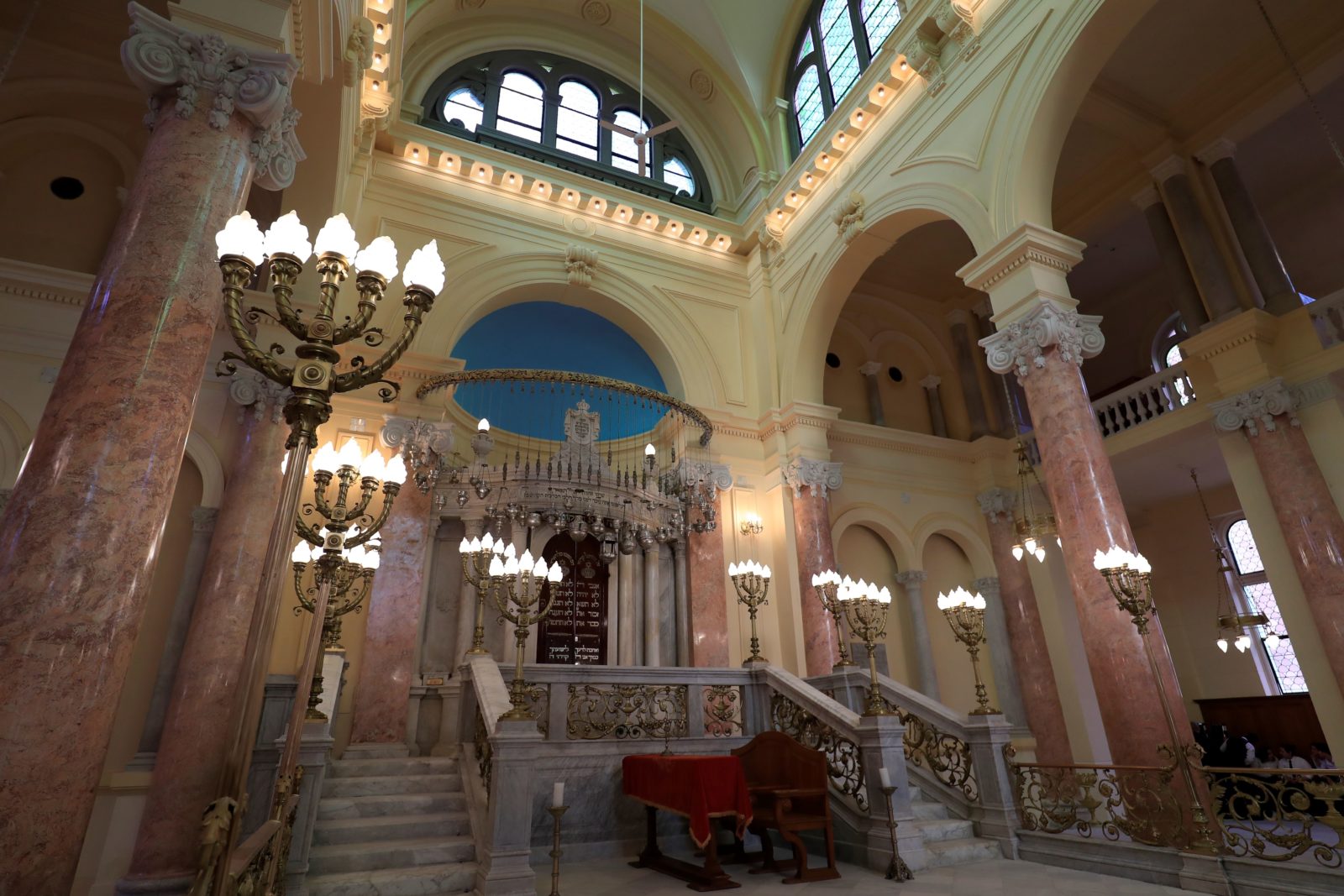 In Egypt, an effort to restore the country’s historic synagogues

CAIRO – Since mid-April, Cairo’s 1,140-year-old Ben Ezra Synagogue has been under renovation as part of government efforts to resurrect the slumbering Jewish heritage in Egypt that resonates around the world.

Located amid some of the oldest Coptic churches in the country as well as the oldest mosque in Egypt, the Mosque of Ibn Tulun, the synagogue, which dates to circa 882 CE, is sometimes referred to as the El-Geniza Synagogue or the Synagogue of the Levantines. The area where it is situated, formerly the center of El Fustat, the first Islamic capital of Egypt, built by Amr Ibn El Aas in 642 CE, presents a unique cluster of ancient religious buildings spanning all monotheistic religions.

“The building serves as witness to the freedom of religious belief Egypt had” when the Jewish population numbered as high as 80,000, Femony Anwar Okasha, an Egyptian researcher in heritage who guides tours through Old Cairo, told Jewish Insider.

According to popular folklore, the synagogue is situated close to the site where baby Moses was discovered in the Nile before he grew up to lead the Jews out of slavery, an exodus marked by the festival of Passover. Ben Ezra is by far the oldest synagogue in Cairo.

“The sanctity of the place for the Jews comes from the belief that Moses was found near the site when he was a child and that he prayed in this place before he left Egypt,” added Okasha. “Also, that the Prophet Jeremiah came and worshipped God in this place. The synagogue was the largest Jewish religious center at the time, with the Rabbinic court next to it and a garden large enough for the members of the community to gather on special occasions.”

Today, even before much of the renovation initiated by the Egyptian Ministry of Tourism and Antiquities begins, it is difficult to enter the synagogue. Situated behind the “Hanging Church,” or Saint Virgin Mary’s Coptic Orthodox Church, and reached by deep winding pathways passing Coptic churches and mosques, the synagogue is heavily guarded. For those who entered it before restoration began, they would have found a small yet elegant interior filled with unusual features in its current structure that dates to 1892 after the collapse of the original temple. Its basilica-style architectural structure with two floors, like other synagogues, is decorated with rectangles, star and pentagonal patterns that reveal the influence of the Ottoman period and comprise Roman columns and archways among other classical references. In the east of the structure is an ark for the Torah scrolls.

What also makes the synagogue all the more historic is that it is the site where Jacob Saphir, the 19th century writer, ethnographer and researcher of Hebrew manuscripts, found the Geniza documents, Jewish writings from Egypt dating from the late 800s CE to the 19th century. To this day, the famous Cairo Geniza serves as the main source for writing the history of the Jewish communities in the region.

The head of the committee supervising the restoration process, Mustafa Abdel-Fattah, told El Watan News that the renovation work includes insulating surfaces to protect against moisture, treating cracks, cleaning the walls and protecting color layers from the ravages of weather.

The project is part of the Egyptian government’s aim to attract more visitors to the country. Tourism accounts for about 12 percent of Egypt’s gross domestic product, a sector that suffered badly during the COVID-19 pandemic. Travel restrictions and lockdowns wiped out $17.6 billion from the Egyptian economy in 2020, according to the World Travel and Tourism Council.

It is also, says Yoram Meital, a professor in Ben-Gurion University’s Middle East studies department and Egypt specialist, indicative of a growing Egyptian interest in its Jewish heritage dating back to the 2011 Arab Spring uprisings, which has increased since normalization between Israel and several Gulf Arab nations.

“The Jewish past in Arab countries, not only in Egypt, has gained widespread public recognition and respect in recent years, and this is a new development,” explained Meital. “After several decades of seeing Jews in a negative way, there is now a new trend of presenting them in a much more positive way, and [this includes] the restoration of Ben Ezra synagogue and before it of Eliyahu Hanavi Synagogue [in Alexandria, which was restored in 2020] in addition to projects in Morocco and the Gulf states, not just synagogues but also cemeteries. I think these [restoration] projects are a direct expression of this revisionism about the Jewish past.”

“It will not be a full-fledged restoration, but just includes a few minor works,” he added. “Still, it follows other restoration projects and reflects growing social change regarding Jews in Egypt.”

In 2020, Egyptian authorities invested $6.2 million in the restoration of the Eliyahu Hanavi Synagogue after a committee at the Ministry of Antiquities recommended preservation of the synagogue, which dates to 1354.

Further, added Meital, the Jewish cultural heritage is now presented as an integral part of local culture and history in various Arab countries.

“This new trend reflects a drastic and meaningful change that has developed in very specific political and social contexts,” he said. “This change should be examined as part of the change that is taking place in the Middle East and North Africa following the 2011 uprisings known as the Arab Spring.”

According to Meital, during this period of upheaval, many Arabs and Muslims turned their gaze inwards towards their own Arab societies and began to reengage with questions concerning social and cultural identity. “It wasn’t necessarily about Jews or Muslims — but about ‘who are we as Egyptians or as Emiratis or Moroccans,’” he added. “It is about the social and cultural identity of Arabs, including the issue of attitudes to minority communities, but also Greeks and Italians and Maltese, others who used to live in the Middle East for many years and then during the middle of the 20th century many left.”

The shift is also seen in the number of television series developed in recent years about Jews in the Arab world. One example, is “Um Haroun,” produced by MBC (Middle East Broadcasting Center), the Arab world’s largest private broadcaster owned by the Saudi state, which aired during Ramadan in 2020, and tells the story of a Jewish family living under Arab-Muslim rule in Kuwait during the 1940s.

A precursor to the MBC show was the 2015 Egyptian TV series “Haret El Yahood,” directed by Mohamed Gamal Al Adl and featuring major actors from Egyptian cinema; it depicts the period between the July 23 revolution and the Suez Crisis in 1952, including the capture of the main thoroughfare in the Jewish Quarter of Cairo and the subsequent expulsion of the Jewish population under Nasser, and how the politics of the period affected Jews’ daily lives.

For the last five years, Meital has been assisting Drop of Milk, a Jewish welfare organization committed to rescuing and preserving Jewish cultural heritage. It also includes Christian and Muslim volunteers. The organization is led by Magda Tania Haroun, the president of the association and head of the Jewish community in Egypt.

Under the regime of Abdel Fattah Al-Sisi, Egypt’s president since 2014, a small Jewish community has gained approval to undertake initiatives to restore and protect local Jewish heritage.

In February 2020, 180 Jews from Europe, Israel and the United States traveled to Alexandria, a city on Egypt’s Mediterranean coast, to attend religious ceremonies at the recently restored Eliyahu Hanavi synagogue. According to The New York Times, it marked the largest such gathering of Jews in Egypt since they were forced to leave the country during the Arab-Israeli wars of the 1950s and 1960s.

“For the first time in many years, I have seen, especially among the young generation in Egypt and throughout the region, people in their 20s and 30s, look inwards asking questions concerning identity such as, ‘What society would we like to envision today?’” said Meital. “Are we in a better or worse situation now because of the lack of these minorities, and who is responsible for this?”

“Is it true that only Israel and Zionism are responsible for the emptying of the Jewish communities in the Arab world? This is the taboo question,” stresses Meital.

While restoration projects certainly point to a desire to increase tourism in Egypt, they are, as believes Meital, part of a bigger societal change taking place in the Arab world — one that is now questioning the very structures on which present-day Arab societies are built and maintained.