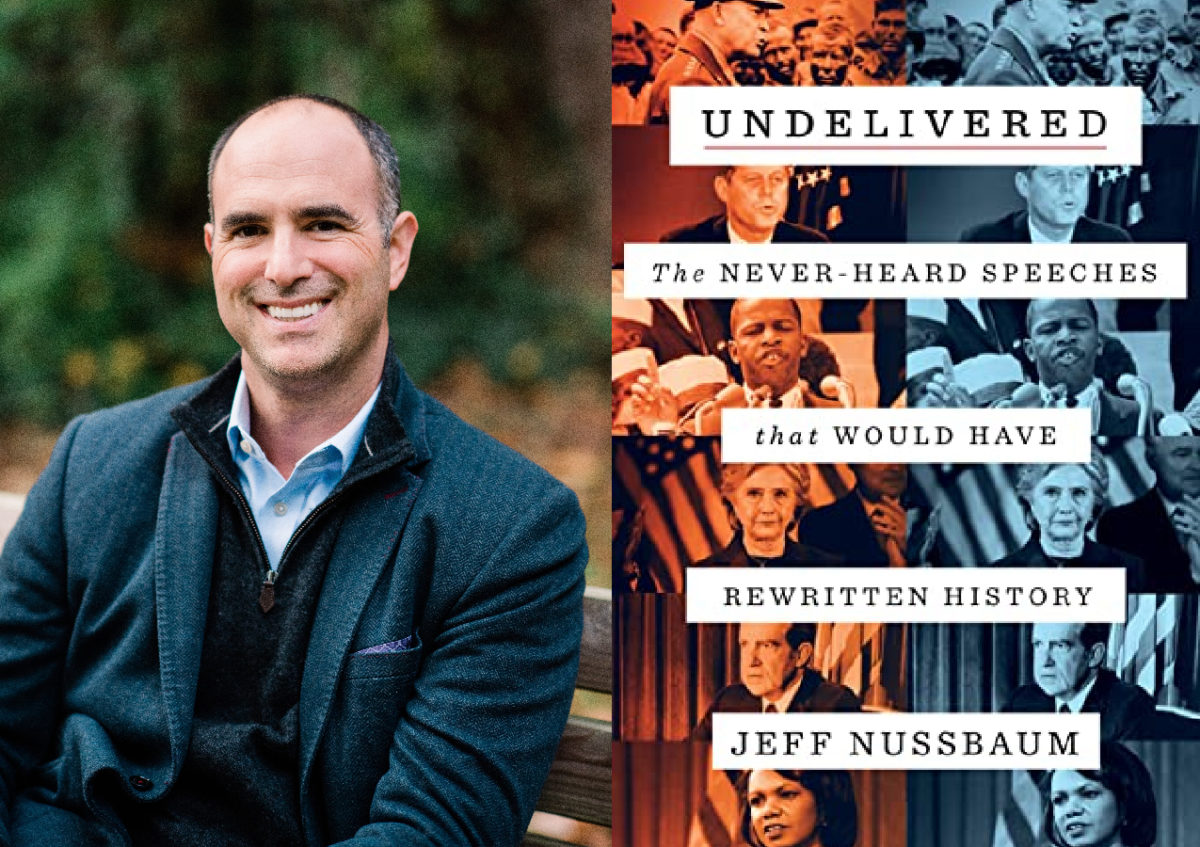 On election night in November 2000, as the outcome of the neck-and-neck vote remained elusive, speechwriter Jeff Nussbaum had drafted three possible speeches for his boss, Democratic presidential candidate Al Gore. One was for a Gore victory, another was for a Gore defeat and a third was for a scenario in which Gore won the electoral vote but lost the popular vote.

Gore didn’t deliver any of them. Instead, he won the popular vote but lost the electoral count to George W. Bush — a shocking result that was affirmed in a controversial Supreme Court decision weeks later. Nussbaum’s speeches, which would have ushered in an alternate ending, were lost to history.

But that night marked the first stop on a scavenger hunt whose clues Nussbaum has been following for two decades. The result is his new book Undelivered: The Never-Heard Speeches That Would Have Rewritten History, which comes out today just weeks after Nussbaum stepped down from serving as a speechwriter to President Joe Biden.

“It started me thinking, there must be other instances in history — and not just elections, which are obvious — where an ultimate outcome wasn’t just envisioned, [but] the words that would accompany that outcome were drafted,” Nussbaum told Jewish Insider. “I started to follow breadcrumbs for undelivered speeches wherever I heard them.”

The treasures he found along the way range from former Secretary of State Hillary Clinton’s would-be presidential victory speech in 2016 to the remarks then-Gen. Dwight D. Eisenhower was set to deliver on D-Day if the Allied invasion of Normandy had not gone well. The book is also threaded with Nussbaum’s observations from two and a half decades spent as a speechwriter for presidents, politicians and business leaders. He has ghost-written two other books, but this is the first published in his own name — a new experience for a person used to writing under anyone else’s name but his own.

“It is different,” said Nussbaum. “I tried to find, ‘where is the drama in the story?’”

The result is a collection of historical essays that tries to put readers in the rooms where leaders were deciding which decision to make — and which speech to deliver. Historians call this idea that every outcome is contingent upon some other event “contingency”: Nothing is inevitable. It’s the real-life version of “Sliding Doors,” the 1998 movie that shows two radically different trajectories for Gwyneth Paltrow’s character’s life based on whether or not she catches the subway one day.

Some of the moments chronicled by Nussbaum are not particularly memorable precisely because the outcome for which the undelivered speech was prepared did not happen. That New York City did not go bankrupt may not be notable on its own; most cities, after all, do not go bankrupt, and their residents never think twice about the possibility. But in the 1970s, “New York City was so close to going bankrupt that the mayor had prepared a speech announcing it,” Nussbaum recounted, referring to Abraham Beame. (A version of this chapter was published in The New Yorker in 2015.)

“I tracked down the bankruptcy attorney at the time, who was a young lawyer and is now an established law partner. He had the bankruptcy filing, but not the speech,” said Nussbaum. “But then his assistant tapped me on the shoulder and was like, ‘I think I might have what you’re looking for.’” She reached into her file cabinet and gave Nussbaum a copy of the speech, which is now published for the first time in his book.

Each chapter also gives readers insight into the complicated political calculus that goes into a leader’s speech. Former Rep. John Lewis (D-GA), a young civil rights activist during the 1960s, intended to give a heated address criticizing the Democratic establishment at the 1963 March on Washington. Lewis wrote a fiery speech that chastised President John F. Kennedy and criticized the civil rights legislation Kennedy proposed for offering too little, too late. But when other organizers saw Lewis’s planned remarks, panic ensued — and Martin Luther King Jr. stepped in to get Lewis to tone down his rhetoric.

“​​One of the really pivotal moments was the fear that John Lewis’ speech was so hot that the Catholic leadership would pull out of the event, and the Kennedys desperately wanted the Catholic Church’s seal of approval on this march,” Nussbaum explained. “That sort of fraught relationship between progressive religious groups and civil rights, I think, is tremendously fascinating.”

Convincing people to hand over their undelivered speeches for publication was, Nussbaum found, a surprisingly easy task. “I was seeking permission to elevate these speeches into the context of history, and in that way, people were very agreeable about it,” he said. If, for instance, Clinton herself published her undelivered 2016 victory speech — or if President Richard Nixon had in the 1970s published a draft of a speech in which he did not resign the presidency — it would have appeared politically motivated. But in a book written by someone else, “all of a sudden, it’s in the context of history and out of the context of politics,” explained Nussbaum.

But he could not always get to the speeches he wanted. One speech that only appears in the book as an acknowledgment of defeat — Nussbaum simply could not find it — was the speech that President Jimmy Carter planned to deliver if the 1978 Camp David negotiations between Israel and Egypt fell apart.

The negotiations were at a standstill, and Egyptian President Anwar Sadat packed his bags to leave. But then, on the verge of collapse, the parties “moved so quickly to an agreement that they basically sprinted out of Camp David to the White House,” said Nussbaum. “Everything that was on President Carter’s desk, including the failure speech — basically, imagine someone taking an arm and sweeping it across the desk into a box, and into the box it went.” The Carter Presidential Library in Atlanta confirmed to Nussbaum that the box existed, but no copy of the speech was found in it.

Then-National Security Advisor Condoleezza Rice intended to speak about President George W. Bush’s foreign policy on the afternoon of Sept. 11, 2001. She never gave the speech, and Nussbaum was not able to access the draft because the national security apparatus would not declassify it. Through Freedom of Information Act requests, Nussbaum received the materials Rice relied upon to draft it and a couple sentences of the speech. That chapter became a primer on the speechwriting process, which Nussbaum hopes can inform people who are interested in the work but may be intimidated by it. He cited a Jerry Seinfeld bit on public speaking, referring to polling that showed it is people’s greatest fear.

“I found that amazing. Number two was death,” Seinfeld said at a stand-up show. “This means to the average person, if you have to be at a funeral you would rather be in the casket than doing the eulogy.”

So Nussbaum’s hope with the book is that readers “have a sense of why some speeches work and why some speeches don’t, and when they work, what strings in your mind are being pulled. And how you can write your own speech — because again,” he explained, “it is something that people fear a lot. And it need not be an unapproachable art.”

It’s not uncommon for talented young speechwriters to find themselves writing for politicians whose careers may have started before the writer was born. In Barack Obama’s administration, his speechwriting staff was known for its fraternity-like brotherhood of young men like Jon Favreau, who was not yet 30 when he became director of speechwriting for Obama.

Nussbaum got pulled into Biden’s orbit in 2008, when the Obama campaign tapped him to lead speechwriting at the Democratic National Convention for whomever Obama picked as vice president. Nussbaum did not expect Biden’s reaction when they were introduced: “He literally crossed himself, looked to the sky and said, ‘I’ve been in the Senate longer than you’ve been alive. What are you going to teach me?’”

What Nussbaum has since articulated is that a talented speechwriter may not know as much as their boss about policy, or campaigning, or how to win a race. “There may not be a lot that you can teach your boss, but there are a lot of ways you can help your boss,” said Nussbaum.

What got Biden on his side, Nussbaum recalled, is the speech he wrote for Biden’s late son Beau, who introduced his father at the 2008 convention. “My dad has always been there for me,” the speech went. But the younger Biden wouldn’t be able to “be there” for his father because he was about to deploy to Iraq. “So I have something to ask of you: Be there for my dad, like he was for me. Be there for Barack Obama, because our country needs him. Be there for both of them.”

The crowd erupted in cheers, and Beau embraced his father when he walked onto the stage.

“That was the moment at which Joe, I think, gave me permission to work for him,” said Nussbaum.

In the White House, Nussbaum has written scores of speeches for the president and other administration officials on everything from the Child Tax Credit to criminal justice reform. He submitted jokes for Biden’s speech at the White House Correspondents Association Dinner last month, but by then, he had already left the White House for his first quiet summer in years.

But what about Nussbaum’s own undelivered speeches? There are “dozens and dozens” of them, he said. His favorites? “I have presidential announcement speeches for people who didn’t end up running for president.”

Unfortunately for political gossip hounds, those didn’t make it into the book.