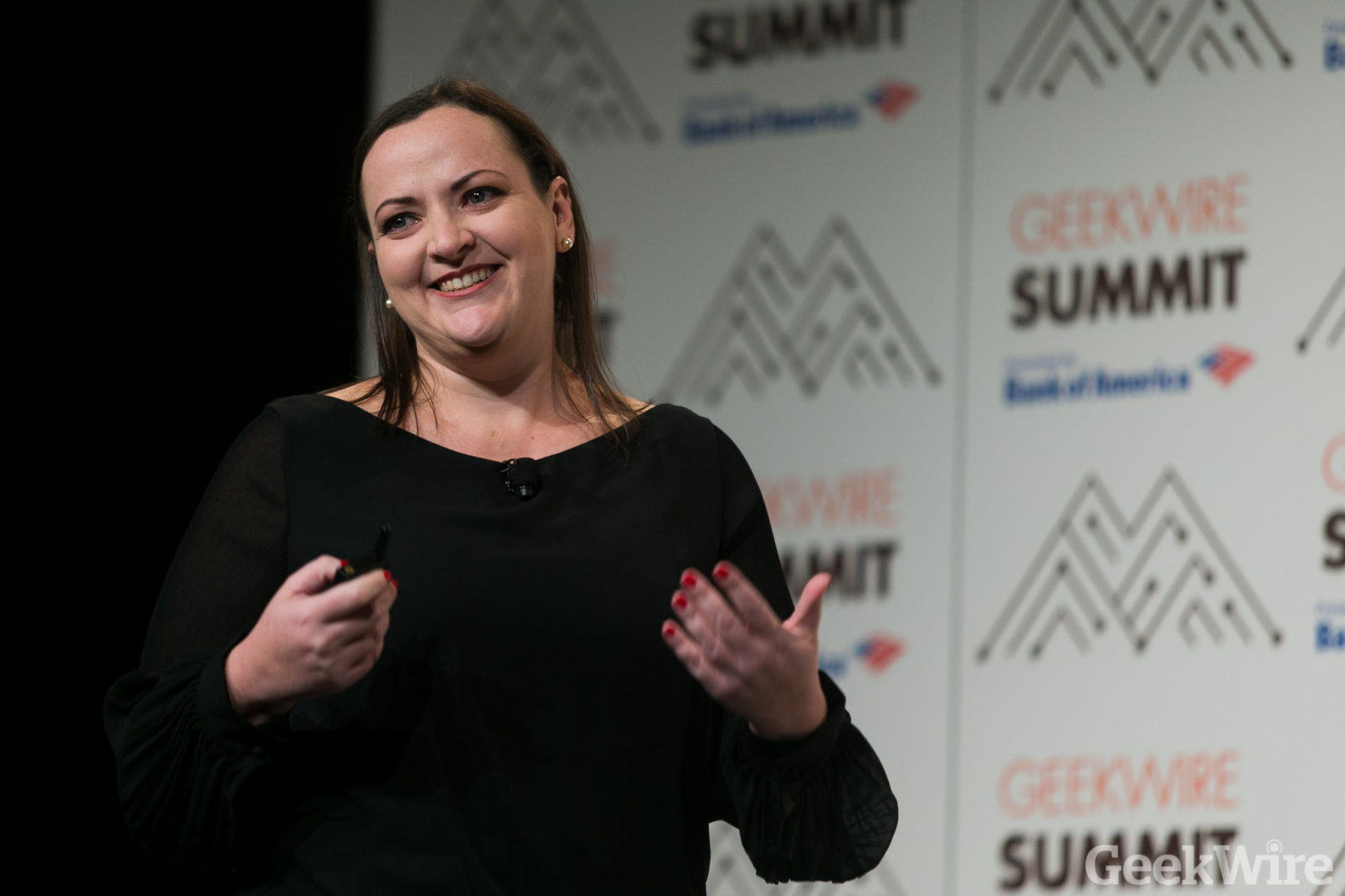 The VC who believes investing in women is good business

Less than 3% of venture capital dollars go to startups founded solely by women. After building a network of 25,000 female founders, Leslie Feinzaig is investing in their ideas

One might expect that a venture capitalist who invests in women-led companies and founded a network of 25,000 female entrepreneurs came to the female founder space after facing gender discrimination in her own career. And Leslie Feinzaig certainly did — she found it nearly impossible to score VC investments when she was pitching a successful gaming company several years ago.

But early on in her career, the barrier the Costa Rica-born entrepreneur had to face most regularly was not her gender. It was her lack of a green card.

“Out of business school, for example, the jobs that I could apply for were a lot more limited versus my American counterparts,” Feinzaig told Jewish Insider in a recent interview from her home in Seattle. “For my classmates, if they lost their jobs, they had to live off savings for a little while and they can get back on their feet. If I lost my job, I would have had 60 days to find a new one or leave the country.”

Now, Feinzaig writes checks to women-led startups as the CEO and founder of Graham & Walker, a VC fund, community network and startup incubator. None of this is what Feinzaig expected when she came to the U.S. for business school.

She moved to Boston in 2005 to study at Harvard Business School on a full scholarship. She was drawn to startups and early stage companies, but the precarity of her immigration status and the expense of landing a work visa led her to take a job at Microsoft, where she weathered the Great Recession.

That she ended up in the U.S. at all represented something of a multigenerational full-circle experience for Feinzaig. Her grandparents had hoped to settle in the U.S. when they fled Poland on the eve of the Holocaust. But strict immigration quotas were the law of the land in the 1930s. Her grandfather and the 10 other Jewish men who had traveled from his village were not allowed to leave their ship when it docked in Ellis Island. Instead, the boat sailed south, and an immigration officer in Costa Rica said anyone could enter the country if they paid a small fee.

“They pooled all their money together. They basically just, like, wadded up the cash,” Feinzaig said.

Her family’s story is the story of the Jewish community in San Jose, and in other communities across Latin America — Jews fled Europe, were denied safe harbor in the U.S. and settled in whatever country would welcome them. Feinzaig expected she would someday return to the country where her entire family still lives. (She recently flew home to Costa Rica to vote in the country’s presidential election; her cousin Eliécer Feinzaig Mintz is the leader of the Liberal Progressive Party and a member of the Legislative Assembly.)

“Originally I just wanted to stay a few years and work here and learn as much as I could and save as much as I could. My earning potential in America is much higher,” said Feinzaig, who is 43. But then she met her American husband, and Seattle became home.

After she got her green card in 2013, Feinzaig left Microsoft to work in product management at tech startups. But the inflection point in her career came in 2016, when she launched her own business, a gaming company called Venture Kits LLC “that was designed to teach kids leadership skills through games,” she explained. “I did all the things that you do to bootstrap a company right from my basement.”

The games, which drew thousands of users, allowed kids to explore being an entrepreneur. Kids and parents enjoyed the games, said Feinzaig: “Even the mommy bloggers loved it.”

But her meetings with investors didn’t go anywhere. They told her she needed more “traction,” a comment that felt hypocritical to Feinzaig when the same VC firms invested in companies “that are just an idea,” while she had already built out a product.

“This is before #MeToo,” Feinzaig said, referring to the social movement that saw women speaking out about sexual harassment and led to broader conversations about gender bias. “We weren’t really talking about who is getting venture capital.”

She was referring to the figures that have emerged in recent years showing a dismal investment environment for female founders. In 2021, companies founded solely by women garnered just 2% of funds invested in VC-backed startups in the U.S., according to PitchBook. The amount of money raised by female-founded startups improved significantly over 2020 — those startups raised $6.4 billion in 2021, an increase of 83% from the previous year — but the percentage has hovered around 2% since PitchBook began releasing the figures in 2019.

At first, when pitching her own company, Feinzaig took the rejections to heart. “Being the type A personality that I am, I completely internalized it, and thought that there was something wrong with me, and that I just needed to work harder and do better and be better,” she said.

But after talking to other women who were pitching investors and getting similar responses, Feinzaig realized her predicament was not due to any personal failing. So she did what people in the 21st century who want to build community with strangers do: She turned to Facebook.

In February 2017, she launched a Facebook group called the Female Founders Alliance with 24 CEOs. She never intended for it to morph into the VC fund she now runs, or to grow beyond a few hundred people.

“It just really hit a nerve, and it grew,” said Feinzaig. The community has ballooned to 25,000 members, who congregate in a private group on an online platform called Mighty Networks. Founding C-suite employees who identify as female or nonbinary can apply to join the online community, which also offers virtual and in-person networking events as well as seminars on fundraising.

The network’s foremost goal is to help founders successfully raise money from VCs. “We’re trying to get founders in front of people who can accelerate their success and really unlock doors,” said Feinzaig. The founders “needed a safe space where they could ask stupid questions but also a place where they were taken seriously.”

In creating the community, Feinzaig was looking for a place to vent and a way to reach investors. But as it grew, she eventually closed down her gaming company and turned to this work full-time. The next step was launching an accelerator program, which started as an intensive boot camp to help startups raise capital but became a proving ground for female-founded startups whose legitimacy had previously been questioned.

“People always think that you’ve made it easier because you’re a woman. I get that all the time today. Like, there’s always that question mark hanging over your head, like, ‘Are you the diversity hire?’” asked Feinzaig. “You cannot claim that on my accelerator, because 100% of applicants are women, and so when investors come and check out our deal flow, they know that we are seeing hundreds of startups — at this point we are seeing thousands of startups every year…and the caliber of those companies is extremely high.”

A couple years into the project, Feinzaig began to question why she was sending promising startups to other VCs instead of making investments herself. She had no experience raising a fund — the vast majority of general partners at VC funds are men, although the percentage of female GPs in the U.S. has increased to 15.4% — and it took her two years to raise $10 million, which was raised mainly (but not entirely) from women. She launched Graham & Walker, a VC firm, in October.

Graham & Walker does not make the massive investments that garner headlines or whispers of unicorn status. Most of its investments are between $100,000 and $300,000, the type of early stage investment that could make a decisive difference for a startup that needs a small infusion of capital to get started.

Most importantly to Feinzaig, the companies in which she is investing have smart ideas and strong business models — in others words, they’re sound investments. The startups’ products need not relate to gender or other social goals. “We’re not a women’s fund. We are a tech fund with proprietary deal flow,” she said. Graham & Walker has invested in 27 companies to date in fields like artificial intelligence, healthcare and legal tech.

“We’re investing specifically in tech companies,” said Feinzaig, “with a goal of reshaping what the NASDAQ looks like by the time my daughters” — they’re 6 and 3 — “graduate from college.”