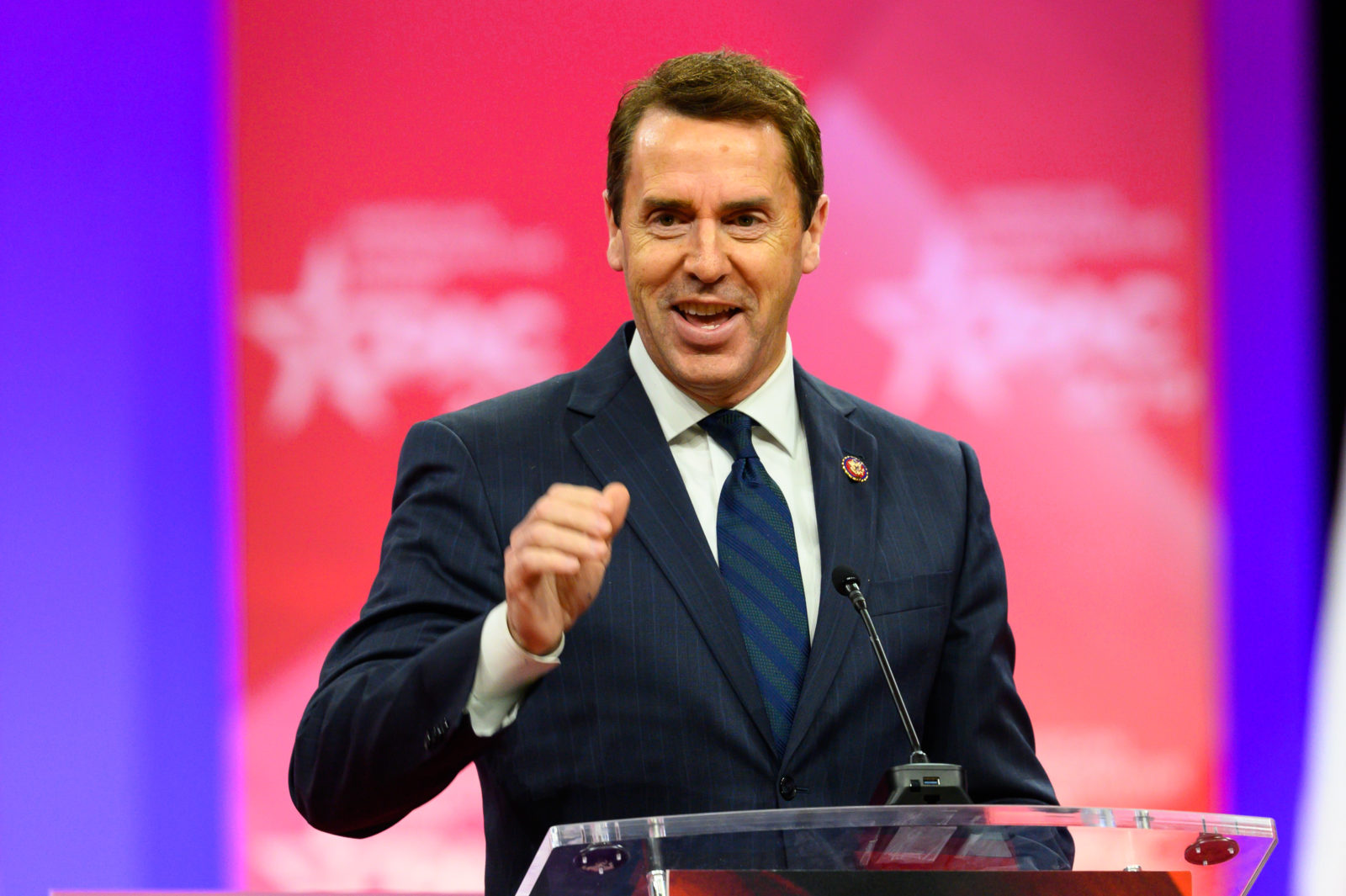 The former congressman and pastor, who is vying to succeed Sen. Richard Burr, is bucking Trump and facing an uphill battle to return to Washington

RALEIGH, N.C.— There are many visits to Mar-a-Lago that offer a thumbs-up and high-wattage smile from former President Donald Trump as he anoints a candidate with a prized endorsement. But one such meeting late last year hosted by Trump at his Palm Beach, Fla., resort was more low-key and led to former Rep. Mark Walker (R-NC) leaving without a deal — and a determination to run a campaign his way for U.S. Senate in North Carolina.

“If it were just about the attention I would probably have Trump’s endorsement,” Walker, who represented Greensboro in the state’s 6th Congressional District from 2015-2021, told Jewish Insider. “I would not be doing this unless there was a definitive path to victory.”

The 2022 race for the Senate seat to replace the retiring Sen. Richard Burr (R-NC), observers say, could be the most expensive Senate contest ever. The state primary itself, however, is already shaping up to be a heavyweight bout between Walker, Rep. Ted Budd (R-NC), who represents the 13th Congressional District, former Gov. Pat McCrory and veteran Marjorie K. Eastman.

The victor in the May 17 primary will be on the November ballot versus the presumptive Democratic nominee, former Chief Justice of the North Carolina Supreme Court Cheri Beasley.

Trump has twice announced his endorsement of Budd, a three-term congressman and gun-shop owner from Winston-Salem (Trump has also announced an upcoming April 9 rally outside Raleigh). According to Walker, when redistricting combined Budd and Walker’s districts before the 2020 election, he withdrew his candidacy to allow for Budd to remain in Congress – knowing the Senate seat in 2022 would be up for grabs.

After Budd announced his own candidacy for the 2022 Senate race, Trump, in a surprise move, announced he would endorse Budd at the 2021 NCGOP convention in June. Several months later, Budd had yet to build a comfortable lead in the polls, leading Trump and his team to think about getting more involved in the race.

On Dec. 4, Trump welcomed Walker to Mar-a-Lago and reportedly offered him a deal: drop out of the Senate race and run for Congress instead — and enjoy the full endorsement from Trump and the fundraising that should come with it.

​​The meeting, according to Walker, was also attended by Rep. Madison Cawthorn (R-NC), Republican congressional candidate Bo Hines (North Carolina’s 13th District) and an executive from Club For Growth, the Super PAC spending millions of dollars to support Budd’s campaign.

Now four months after that meeting, Walker continues to buck Trump and walk the tightrope of embracing the America First brand but maintaining an aura of independence. Simultaneously, Walker strives to buck polls, which find him in third place behind McCrory and Budd. A new poll from Emerson College released April 5 shows Budd earning support from 38% of respondents, McCrory with 22%, and Walker at 9%.

“I’ve never done anything in my life just to be the spoiler,” Walker told JI. “I’ve got more important things to do.”

The son of a pastor grew up in the Florida Panhandle before coming to North Carolina as an adult for a job in finance. Despite his initial reticence to follow in his father’s footsteps, Walker attended seminary and would become a spiritual leader of churches in Greensboro and Winston-Salem. In 2012, Walker was the pastor at Calvary Baptist Church when a friend invited him to the Republican National Convention in Tampa, giving him his first taste of politics.

Walker said that he was inspired to run for Congress in 2014, after the reelection of former President Barack Obama two years prior.

“Serving as a pastor and dealing with people from all walks of life, working in the inner cities and the refugee camps, I thought it brought a certain perspective that the Republican Party needed to understand that we were missing the mark on building relationships,” Walker said of his mission trips across the country and overseas.

In a crowded field that included the more heavily favored (and funded) Phil Berger, Jr., Walker forced a runoff in the primary and then won election to Congress in 2014. Walker would quickly rise through the ranks of caucus leadership as well, even becoming the vice chair of the Republican Conference.

“People think I’m a hard-core conservative, but there’s a reason that I’m the only Republican that’s spoken at a Historical Black College and University (HBCU),” Walker said, referencing his 2019 commencement address at Eastern Carolina State University. “That doesn’t happen by a freak of nature, it happens because I hope my approach goes beyond just trying to win the argument.”

Walker is on record as wanting to replace Sen. Mitch McConnell (R-KY) as Senate minority leader with Sen. Rick Scott (R-FL) should Republicans retake the majority in the midterms.

Policy-wise, Walker matches up with his rivals on issues related to trade, taxes and immigration. They’re all also consistent in opposing President Joe Biden’s domestic agenda – and would vote against his Supreme Court nominee, Judge Ketanji Brown Jackson.

As a student of the Bible, Walker maintains he’s well-versed in the significance of the Holy Land, but also claims a deep political and geopolitical understanding of the region.

“I’m pretty set on my perspective,” Walker insists. “To say that there’s as much wrong on the Israeli side as the Palestinian side, well that’s a slippery slope. That sounds like a good political talking point but it’s not factual.”

Walker recalled a visit to Israel in 2016 and meetings with then-Israeli Prime Minister Benjamin Netanyahu, followed by a visit to Jericho, in the West Bank, to meet with Palestinian officials, the latter of which Walker said continues to haunt him.

In his six years in Congress, Walker co-sponsored the bipartisan United States-Israel Cooperation and Regional Security Act, as well as a House resolution denouncing “efforts to delegitimize the State of Israel and the Global Boycott, Divestment and Sanctions Movement.”

He also used his social media accounts to blast “anti-Israel ideology” among some Democrats.

On Iran, Walker is ardently against the Biden administration’s current negotiations with Iran and vows to vote against any deal if he’s elected to the Senate.

“I very much supported President Trump getting out of the Iran deal [in 2018]. I have problems with this,” he said. “If you zoom out a little in this, Russia is playing us. We’re negotiating this whole thing with Iran, and how do we know we’re not going to get hosed? Iran is still the leading state sponsor of terrorism in the world. As long as you’re saying, ‘Death to Israel’ and ‘Death to America,’ I’m going to interpret that as saying you would do damage there.”

As for incidents of domestic terrorism, including the attack on a synagogue in Colleyville, Texas, Walker said he generally supports boosting federal funds to protect Jewish institutions in the face of rising antisemitism.

“I didn’t recognize the rise in antisemitism until I was briefed in Intelligence Committee meetings, and all I could think of was, where is this coming from?”

According to Walker, white supremacist groups need to be condemned outright, but he also thinks it’s a “misnomer” to think antisemitism only emanates from “some small, redneck village.”

“I want to be careful of pointing the finger at one group or the other, but I do think you can make a case that some of this rhetoric on the left against Israel leads to antisemitic behavior.”

North Carolina’s primary would have been held on March 8, if not for an order from the state Supreme Court, which halted candidate filing and ordered the General Assembly to redraw legislative districts amid concerns of gerrymandering.

The added time has opened the floodgates for more spending, with Club For Growth, a political action committee supporting Budd, intending to spend up to $10 million in ads ahead of the rescheduled May 17 primary.

McCrory, who initially led in polls but now trails Budd, is the only one of the four candidates to have won a statewide election (though he lost reelection in 2016 with Trump on the ballot).

“We’re fully committed to this,” he said. “The polls don’t bother me and I’m not going to sit at a desk asking people for money. It matters for people to show up where they are, and I’m daggum proud to do it.”

The pastor, naturally, is keeping the faith in his candidacy.