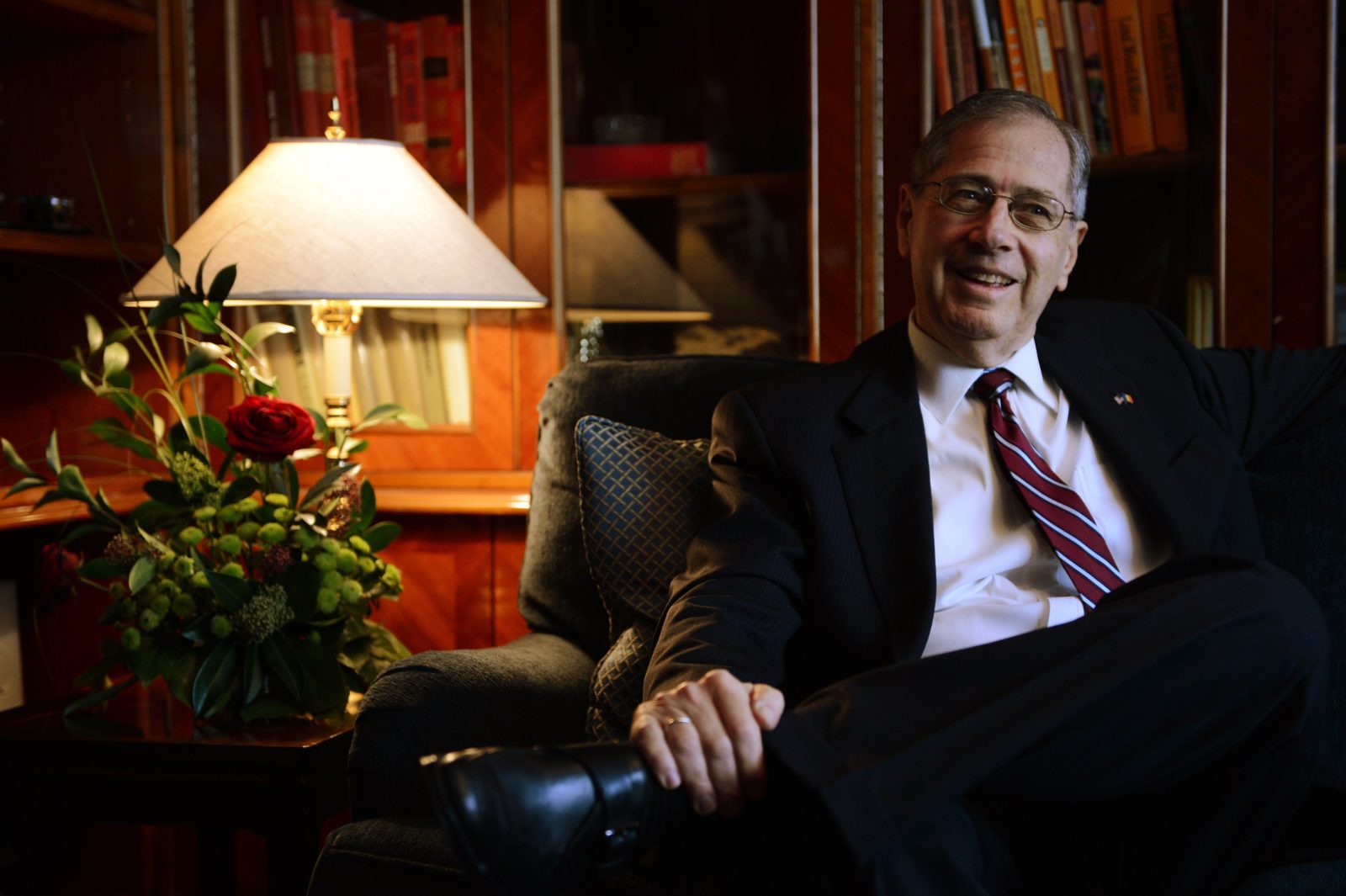 As Europe responds to Russia’s invasion of Ukraine, all eyes are on Washington’s ambassador to the EU, Mark Gitenstein

As Russian troops expand their invasion across Ukraine, President Joe Biden will travel to Brussels today for a series of high-level emergency meetings with NATO and European Union officials. When he lands in Europe, he will be greeted by a familiar face: Mark Gitenstein, the U.S. ambassador to the EU — and the president’s best friend.

Gitenstein arrived in Brussels in late January, just weeks before Russian President Vladimir Putin’s invasion of Ukraine. In theory, Gitenstein’s position — as an ambassador to an entity that neither the U.S. nor Ukraine is part of — may appear ornamental, a prized political posting for a personal friend of the president.

But at a time when Russia is upending geopolitics on the European continent, Gitenstein suddenly finds himself as one of Washington’s most important representatives abroad.

“The European Union is the most important organization in the world to which the United States does not belong,” said Daniel S. Hamilton, a former deputy assistant secretary of state for European affairs and a non-resident fellow at the Brookings Institution.

Ukraine is not a member of the EU, but Ukraine’s desire to join Western institutions like the EU and NATO partly touched off Putin’s military campaign in the country. Moscow’s 2014 effort to illegally annex Crimea came in response to a trade agreement between Ukraine and the EU.

“That’s why the discussion about NATO and all this is sort of a distraction, a diversion, which I think Putin is trying to orchestrate away from the real issue,” Hamilton explained, “which is that a successful and democratic Ukraine anchored into the institutions of Europe, primarily the European Union, would pose a threat to authoritarianism in Russia.”

Gitenstein, a lawyer, previously served as U.S. ambassador to Romania under President Barack Obama. Former colleagues and foreign policy experts suggest his time in Eastern Europe will leave him well-equipped to navigate the crisis in Ukraine. Gitenstein did not respond to a request for comment.

“I think he must bring with him a sensitivity to the concerns and the historical experiences that countries in the eastern part of Europe bring with them, post-communist countries still dealing with lots of legacy issues from a Soviet time,” said Hamilton.

Soon after he arrived in Bucharest, Gitenstein came face-to-face with one of the early challenges he would have to handle: navigating the thorny politics of the Holocaust in contemporary Eastern Europe. He got to Romania at the end of a yearslong national struggle to come to terms with the country’s actions during the Holocaust, and he immediately had to learn to tread lightly when balancing Holocaust remembrance with the politics of an upcoming election.

In a ceremony marking the country’s Holocaust memorial day in October 2009, Gitenstein spoke before parliament about his Romanian roots, and shared the story of a relative he only recently discovered who left the country for Israel after the Holocaust, when his whole family had been killed.

“It is a particular privilege for me to participate in this dedication, as an American, as an American Jew and as a Romanian-American Jew. It is a moment of profound self-discovery. My journey of self-discovery is only a shadow of what you, the people of Romania, are engaged in. It takes courage and determination to face your past,” Gitenstein said. The ceremony took place on the day a new Holocaust memorial was dedicated, a historic sign of progress in the country.

In 2003, former Romanian President Ion Iliescu tasked Holocaust survivor and Nobel Peace Prize Laureate Elie Wiesel with creating a commission to study what occurred in the country — where Wiesel was born — during the Holocaust. Like many socialist countries, Romania was known to have suppressed the truth about the Holocaust during the communist era that followed World War II.

Wiesel’s report, published in 2004, found that between 280,000 and 380,000 Romanian Jews were killed in the Holocaust under the leadership of Romanian leader ​​Ion Antonescu, who was sympathetic to Hitler’s policies and willingly assisted him in his plans to kill the country’s Jewish and Romani populations. The cornerstone for the country’s first official Holocaust memorial was laid in Bucharest in 2006.

“It all kind of came to its conclusion in October of 2009,” said Andrew Baker, director of international Jewish affairs at the American Jewish Committee. Baker expected a large American delegation to attend the dedication of the Holocaust memorial, but he was disappointed to find few American officials at the ceremony. A plaque for the memorial was not yet mounted, so the information about what, exactly, was being remembered was not made clear to visitors, and Baker was confused about the event’s somewhat under-the-radar nature.

“I didn’t really understand what the problem was. So [the Romanian president] said to me, ‘Well, it’ll take time for the Romanian public to understand, really, what happened, to accept this history, the role at the time of Antonescu, who led the Romanian government and ordered these deportations.’ He said, ‘It will take 30 days, 60 days,’” recalled Baker. “And I’m thinking, really, 30 days? 60 days? And then it dawned on me: elections. Elections were coming up in another month.”

No one wanted to say or do anything around the fraught issue of Holocaust remembrance that would lead to any uproar in the final days leading up to the election. In December 2009, after voting ended in the country’s parliamentary and presidential election, the plaque went up. “He was on target and supportive of virtually everything,” Baker said of Gitenstein.

One lesson Gitenstein may have learned from his stint in Romania is that “history can have a very real impact on what goes on today,” Baker said, particularly at a moment when Putin is trying to rewrite the history of Europe.

Ukraine and Romania are young democracies, and both countries have faced challenges in their transitions out of communism. Gitenstein is familiar with those challenges. A White House press release announcing Gitenstein’s nomination to his current post highlighted how he “focused on fighting corruption and preserving democratic institutions” when he was in Romania.

Romania is a couple of steps ahead of Ukraine in that journey. Romania joined the EU 15 years ago; Ukrainian President Volodymyr Zelensky formally requested last month that Ukraine be permitted to join the body. But the process of becoming a member is complicated, and membership in the EU requires an adherence to certain democratic principles.

“The further west you go in Europe, my personal experience is in Western Europe, they don’t have that same” sensitivity to the legacy of socialism and the Cold War, said Hamilton. “I think right now, [understanding] why Ukraine matters, why that part of Europe matters, I think would be probably the most important thing to bring. He would really know how to work within government structures that have been impaired because of the experiences, and how to address corruption issues and address all the things that the Ukrainians themselves also have to deal with.”

That Gitenstein already served as an ambassador for three years could help him in his current posting at this high-stakes moment.

“He already knows how to be an ambassador. He knows how to interface with foreign officials, how to listen, how to speak in terms that matter to them,” said Howard Gutman, who served as U.S. ambassador to Belgium when Gitenstein was in Romania.

And Gitenstein’s relationship with Biden doesn’t hurt, Gutman added. “It’s not like Mark picks up the phone once a day and says, ‘Joe, how are you?’ But the fact that he could do that at any time gives him a gravitas and credibility in his dealings abroad.”

During an October 2009 visit to Romania, then-Vice President Biden called Gitenstein “my best personal friend,” and explained, “We have raised each other’s children. Our wives are close friends. My grandchildren consider the Gitensteins to be almost relatives.” He jokingly told then-Romanian President Traian Băsescu not to “take advantage of my friendship with the ambassador too badly.”

Their personal friendship dates back decades. Gitenstein worked in Biden’s Senate office in the 1970s. For a period, Gitenstein served as chief counsel of the Senate Judiciary Committee when Biden chaired the committee.

Gitenstein is just one of three American ambassadors in Brussels, along with Julianne Smith, ambassador to NATO, and Michael Adler, ambassador to Belgium. “Every ambassador in Europe is working on the same issue, but just to a different audience,” explained Hamilton.

“I think this is probably a very important time to be in that position, since we’re coming off of four years where we had a Trump administration that seemed to be dismissive of the EU generally, and our EU partners individually,” said Baker. “He’s obviously likely to have a better time now that we have an administration partnership, and we need it, with everything going on right now.”