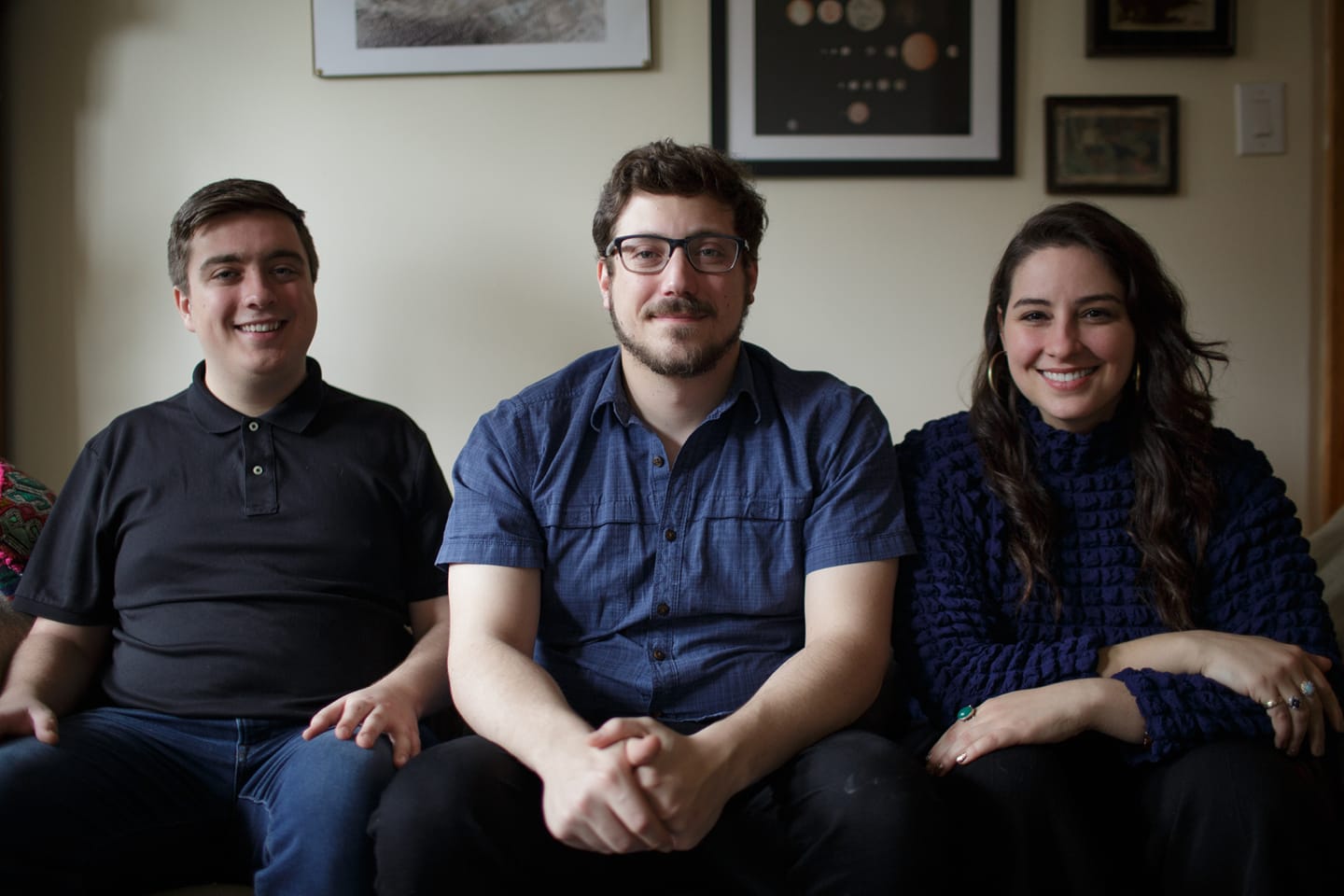 Manna Cooking, which debuted on the iOS app store yesterday, was created by a trio of Jewish day school grads

For people with dietary restrictions looking for suitable recipes online, finding the right ones is like manna from culinary — and swipe-and-click — heaven.

Maybe you keep kosher, and you find what looks like a great chicken recipe — but then you have to scrap your plans to make it when you scroll to the list of ingredients and realize it contains cream, or perhaps bacon. You could be gluten-free and find a delicious fish recipe that, you later learn, requires breadcrumbs. Or you’ve discovered over years of trial-and-error that apples make your stomach hurt, and you’d rather not see any recipes with the dreaded fruit.

A close-knit group of Jewish day school alums-turned-startup founders say they have the solution for these problems and others with Manna Cooking, a new app that launched on the iOS app store on Tuesday.

The trio has spent the past several months in an incubator program run by Interplay Ventures, a VC firm that has invested in successful companies including Coinbase and Warby Parker. They raised $400,000 to launch the app, which they began working on in 2019, and they aim to raise $3 million in a seed round in the spring.

In a Zoom interview with Jewish Insider from their separate Brooklyn apartments, Josh and Rachel Abady — wearing matching Manna sweatshirts — shared an ambitious vision for their new startup, hoping to become something like the Goodreads or Spotify of food.

The main interface of the app is based on dating apps like Tinder, with users able to swipe through recipe cards as one does for potential romantic partners. They see a photo of the dish, the title and type of cuisine, the difficulty, the price range of ingredients and the time it takes to prepare it; then they can swipe right to “like” the dish, or swipe up to save it to their cookbook. Clicking the card shows more information and specific details.

Users can also edit recipes, making note of changes like swapping oregano for thyme or adding more vegetable stock. They can then save their own versions, which other users can view, creating a chain of community engagement. In addition, app users can upload and publicly post their own recipes.

Unlike the food blogs that have proliferated online, users do not have to read through several paragraphs of explanation — a conduit for generating ad revenue for the blogs — to get to the actual recipe; the ingredients and the directions are right at the top.

“When you’re in the kitchen, the worst experience is scrolling through ads back and forth, because you have six paragraphs about why someone loves lima beans. That is not necessary,” said Rachel. “Recipes and storytelling naturally go together. ‘My grandmother’s recipe is the reason I eat this.’ But they don’t go together when you’re actually cooking in the kitchen.”

For Rachel, 32, and Josh, 27, “food was a big part of our lives because of all the Jewish holidays,” recalled Rachel. The family always had Shabbat dinner together, and also enjoyed the thriving food scene in their Manhattan neighborhood. “Outside our doors on the Upper West Side, beyond Jews being strong in numbers, you have every deli, every bodega, every restaurant you could possibly want. And so it was just like always integral [to us].”

Neither has experience with startups or mobile apps. Rachel worked in audience engagement at a number of media organizations, including Vox and The New York Times. Josh worked as a private tutor and played poker professionally.

As students at Solomon Schechter of Westchester (now the Leffell School), the Abadys met Greenstein, the tech expert of the group and the person who originally came up with the Manna concept. He, too, grew up steeped in food, but in a different way: His mother is a private chef for kosher and vegan clients. (His father, David Greenstein, an entrepreneur, is an investor in the company and the chair of its board.)

Greenstein and Josh Abady initially bonded over the food they couldn’t eat. “Food is unfortunately both my greatest blessing and biggest hobby, and also my greatest curse, because I have extremely severe IBS [irritable bowel syndrome], and unfortunately so does Guy,” Josh said. “That’s kind of where this all started.”

Manna users can input foods they are allergic or sensitive to or simply want to avoid, and those ingredients will then be highlighted in recipes so users know to avoid them. Down the road, the app’s creators plan to add a feature to search by a specific type of diet or restriction — kosher, Keto, vegan, gluten-free, halal, etc.

“We’ll flag any ingredient for you that doesn’t match your diet, and over the next months and years, that’s going to get smarter and smarter and start to offer smart replacements and learn more and more about you,” said Josh. This means the app might suggest tofu when a recipe calls for chicken, or imitation meat in place of sausage.

It’s one of several features that the creators are excited about but which are not yet built into the app. A grocery tab on the app is “coming soon”; in the future, the trio hopes that Manna users will be able to directly order groceries from the app.

The company’s founders also plan to add direct message capabilities and groups, so users can connect over shared interests — “busy moms,” Rachel offered as an example, or “Jewish comfort food.” Another goal is to build out a hands-free capability, so users can ask virtual assistant technology, such as Amazon’s Alexa or iOS’s Siri, to read the recipe while they are cooking. They hope to add an ecommerce digital storefront, selling products from partner brands.

This will be one of two revenue streams for the app, which plans to also offer subscriptions for users to get better customization and additional features. They don’t intend to sell advertising on their platform but acknowledge that could change.

“Right now and for the foreseeable a couple of months, we’re not going to be generating any revenue, just focusing on community growth, and really just trying to get as many people on here as possible,” said Josh.

The company has partnered with celebrity chef David Burke, who owns more than a dozen restaurants in the U.S. and Saudi Arabia. His recipes appear on the app, along with several thousand other recipes the company has aggregated from an approved list of cooking websites. But it faces a major challenge in winning over devotees of more popular, established recipe sites.

“We’re here to make friends and not enemies,” Josh said, referring to the requirement to remain within the bounds of intellectual property law and get permission from the websites from which it sources recipes. The New York Times, which has grown its cooking vertical significantly in recent years, is subscription-based, so its recipes can’t appear on the app. Neither do recipes from some well-known blogs like Smitten Kitchen. “It would be ideal for us if every great recipe publisher in the world is like, ‘Oh, that’s so cool.’”

A selection of recipes that came up in the swipe feature on the app’s first day: cauliflower-crust caprese pizza, scallion pancakes, matzah ball soup — the latter of which being one of several recipes that, like the app’s name, pays homage to the founders’ Jewish education.

“Manna supposedly fell from the sky to give the Israelites everything they need for nourishment. And that’s the ethos of the app,” explained Rachel. “We are supposed to give you everything you need in the kitchen, from inspiration to preparation to sharing to cooking to shopping. We want to be your proverbial manna.”