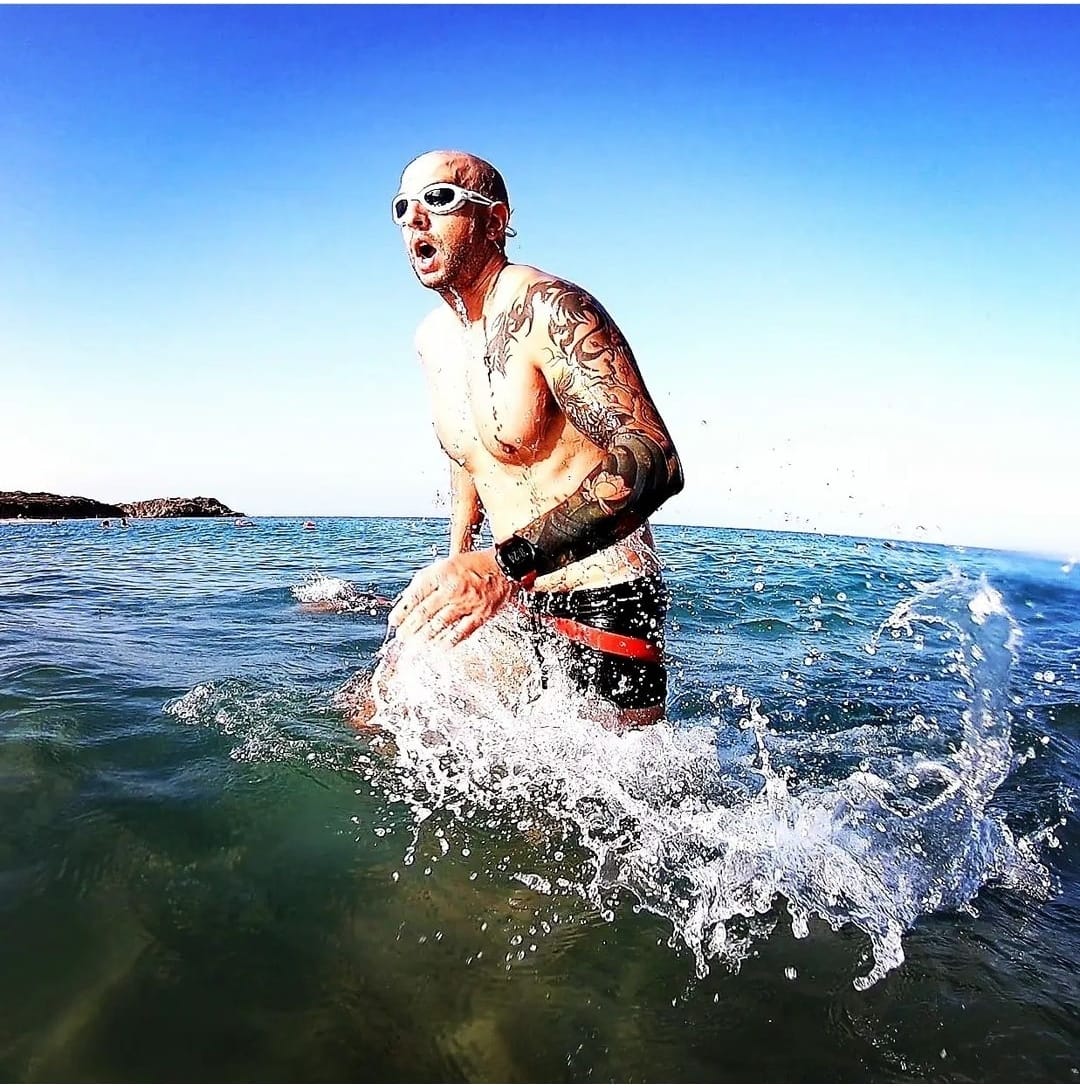 A triathlete runs (and swims, and cycles) to daylight

After the darkness of PTSD brought on by his army service, Yuval David Shimoni is competing in Israel’s first Ironman and helping others heal through sports

​​Yuval David Shimoni is literally running for his life these days. And swimming. And cycling.

When he competes Friday in Israel’s first-ever Ironman triathlon, he will be continuing his slow but steady recovery from the psychological trauma he suffered following his harrowing experiences in the IDF.

In his agonizing journey toward healing, one that took him to the brink of suicide, David Shimoni said, sport helped save him. The discipline required in an event like the triathlon — a mix of long-distance running, swimming and cycling — provides him with positive challenges, gives him faith in himself and the strength to succeed through hard work and self-improvement. Regular therapy and a soldiers’ triathlon support group have also helped along the way. “I’m still in the process of returning to myself,” David Shimoni, today a therapist who is guiding others on their own paths to recovery, told Jewish Insider.

For David Shimoni, 41, the path that has led him to the shores of the Sea of Galilee, where the Ironman will take place, has been a torturous one.

Four years ago, he hit rock bottom when he was tied to a bed in a psychiatric ward in Tel HaShomer Hospital in Ramat Gan. This was a pivotal wake-up- call following a hellish journey through post-traumatic stress disorder, which all but destroyed his life, after his time as a combat soldier in the Second Lebanon War.

David Shimoni’s army service in the Paratroopers’ Unit passed smoothly, but in the summer of 2006, while in the midst of the exam period at the Hebrew University of Jerusalem, he was called for reserve duty to fight in a deadly and messy war against Hezbollah in Lebanon.

In the middle of the 34-day-conflict, David Shimoni’s unit entered Lebanon. The house where they were holed up was hit by two missiles, killing nine members of his unit and wounding several others. David Shimoni was physically unscathed. But he said that a some seven-hour wait for the rescue-and-evacuation force to arrive, and what followed, caused him deep psychological trauma that would manifest itself several years later.

“After they evacuated the dead and the wounded, we were instructed to stay there. We were covered in blood, we had no food, no water and we didn’t know why we were staying — we hadn’t been given a new mission,” David Shimoni told Jewish Insider. The long days that followed in Lebanon almost broke him.

“It felt like the state had betrayed us and left us on our own, and as the days went past I felt like it was only a matter of time until I died, and I decided I wasn’t going to return to Israel — I’d come to terms with death,” he said — a feeling that came back to haunt him years later when he began to have suicidal thoughts.

After the missile strike, his unit spent most of their days hiding in bushes and the nights at observation posts. “There was a lot of confusion [surrounding the war], and we felt it in a direct manner,” he said.

After his unit returned to Israel, he thought “the nightmare was over.” He finished his university exams and took a flight to China, where he lived for several years. It was during that time that the flashbacks began, mostly coming to him at night.

“It was hard for me to fall asleep, and when I did manage to sleep I had nightmares. I was really scared of the nights,” he recalled. Shortly after, the anger attacks began and David Shimoni felt himself deteriorating. He returned home to Israel but he started isolating himself from his loved ones.

“I felt really lonely and I felt like no one understood me and everyone else was stable in their lives,” he said. He felt like he was a burden to others and subsequently disconnected himself socially. He started taking psychiatric medication and sleeping pills. “This was my escape space,” he said. At some point, he started using drugs, first soft ones and then harder ones.

“For me, the medicine was the same as the drugs, it had the same effect. It caused me to deteriorate. I felt like I was in control of my life — I didn’t understand what I later understood, that I was totally on a downhill path and on the way to total collapse,” he said.

He stopped working and the symptoms, the depression and the despair got worse, snowballing into acts of self-harm. David Shimoni was suicidal. “My romance with death started in the war. The answer became death,” he explained. “It created a type of comfort — you know there is that solution. My will to die became more precise, I thought about it all the time. I felt a black hole in my stomach.”

David Shimoni said he made all the “required preparations” for his suicide, but kept postponing it. He was married with twins, and battled between thoughts that his loved ones would be better off without him and the reality that he would be abandoning his children.

“I can’t say why it didn’t happen,” he reflected. A fear that the suicide attempt might fail or of the pain it might cause him were factors. “But luckily it didn’t happen, and this is one of the things that strengthened me and turned me into who I am today.”

Today, David Shimoni is not only healthy and happy, but helping others on their own paths out of depression to recovery.

His own healing was helped along by Prof. Shaul Schreiber at Ichilov Hospital’s Day-Care Psychiatric Department, who taught him to believe in and love himself again. Now, David Shimoni works as a therapist, both privately and on a volunteer basis, helping others to believe in their own strengths to pull themselves out of their personal crises.

Crucial in his recovery process has been his involvement in a triathlon group, part of the Brothers for Life NGO that supports IDF veterans who sustained physical or psychological injuries as combat soldiers. “Psychological wounds can totally paralyze you,” David Shimoni remarked.

He said the group, which he joined two years ago, gives a sense of belonging to people who have felt alone for years.

“After years of feeling alone, like you don’t belong and nobody knows what you’re going through… you can start to feel comfortable, that it’s kind of normal, and that you are understood. And when others understand you and you feel like you belong, then you can really spring forward.”

“I’m still in the process of returning to myself,” he noted. He’s already completed two triathlons and sees the Ironman as “the peak of the peak ” — a much longer race than the ones in which he has already competed.

The race in Tiberias, organized by the Tel Aviv-based Comtecgroup and the Sylvan Adams Foundation, will see athletes swimming a 1.2-mile loop in the Sea of Galilee, cycling 56 miles to Kfar Nahum, and running 13.1 miles along the western shore of the lake. Over 2000 athletes from 35 countries are expected to compete in Tiberias in what is a half-Ironman, hosted by the municipality in collaboration with the ministries of tourism and culture and sport, as well as the Israeli Triathlon Association.

“It’s a great privilege to take part in the first Ironman in the country I fought and was injured for. It’s a double victory for me,” David Shimoni said.

Physical activity, he added, helps a person set goals and aim higher, both in the task at hand and in life in general. “A few years ago I wasn’t able to look ahead to my future or my children’s future, and today I can look ahead and I think a lot of that is thanks to sport, and this specific sport.”