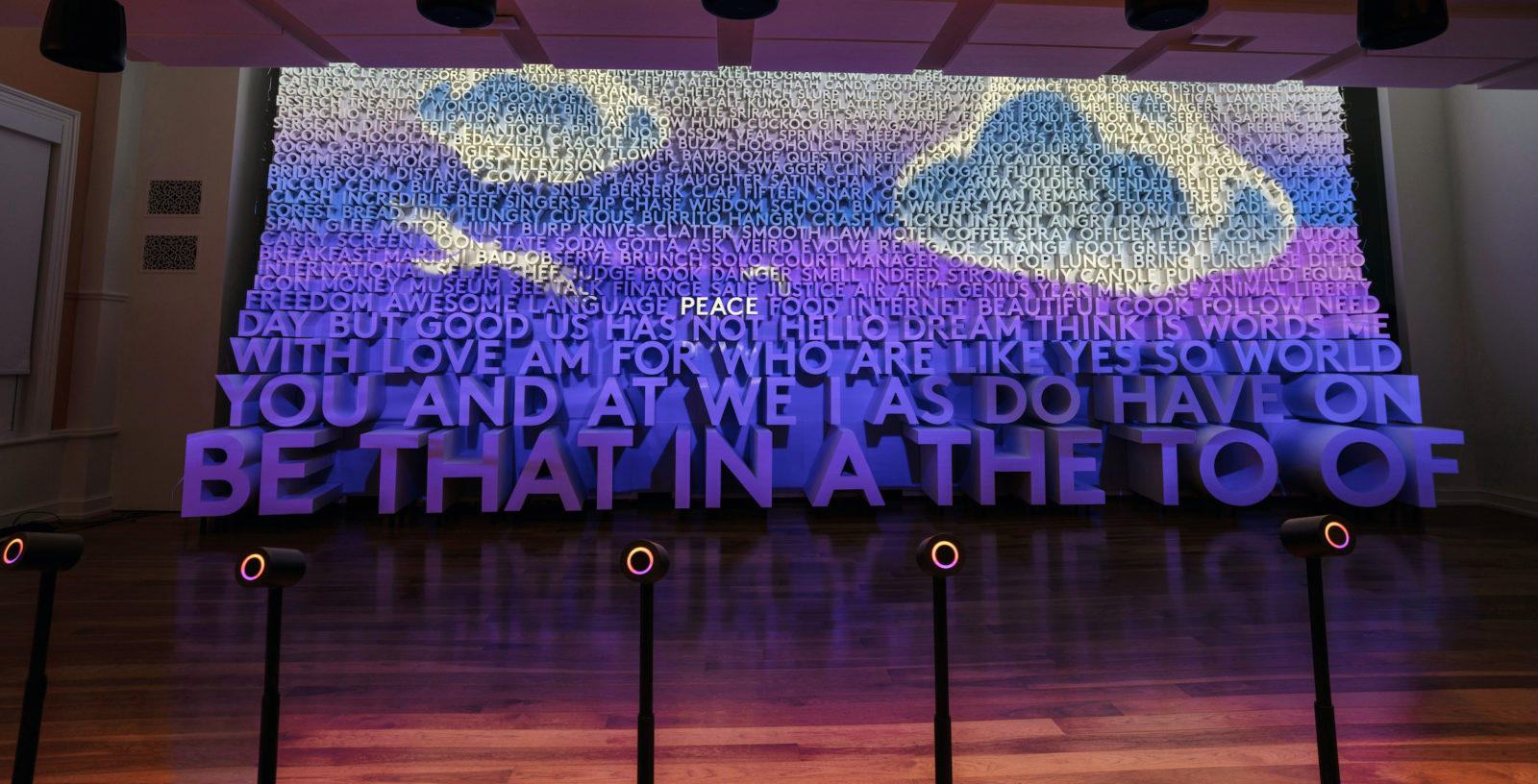 Reading the room at Planet Word

Washington’s newest museum is a labor of love, and a major financial investment, for philanthropist and retired teacher Ann B. Friedman

On a Thursday morning, just before lunchtime, it’s time for karaoke.

A woman is belting out Dolly Parton’s “Jolene,” trying in vain to get her embarrassed daughter, maybe 10 years old, to join in. Instead, she gets Ann B. Friedman, 67, who sidles up beside her and starts singing: Jolene, Jolene, Jolene Joleeeene.

The two women do not know each other, though this is not the raucous brand of karaoke that follows too many sake bombs or mixed drinks. They are in an exhibit at Planet Word, an interactive museum devoted to words, language and literacy that opened in Washington, D.C., last year.

This room is meant to teach visitors about songwriting, one of several exhibits that are “devoted to what we do with words,” Friedman, the museum’s founder and CEO, said in an interview with Jewish Insider while on a recent tour of the museum. People can choose from a couple of dozen songs that the museum has acquired the rights to, with Disney hits “Let It Go” and “Moana” among the most popular. The lyrics are projected on a wall, while certain elements of songwriting — like metaphors, alliteration and repetition — are highlighted and explained next to the text.

Spread over the five stories of the historic Franklin School, a century-and-a-half old red-brick building across from Franklin Square in downtown Washington, the museum is the embodiment of Friedman’s love of language and reading.

“One of the big questions I got a lot of time from people when I told them about the museum was, ‘Oh, are you going to have an exhibit on diagramming sentences?’ I was like, ‘No. This is not a right or wrong museum. This is where we celebrate language like we use it,’” Friedman recalled.

The museum has been a labor of love — and a massive financial investment — for Friedman, who first began working on the project in 2013, a few years after she retired from teaching first-grade reading in Montgomery County, Md.

“I loved reading, always,” said Friedman, whose favorite book as a child was Frances Hodgson Burnett’s The Secret Garden. She read it often growing up in Des Moines, Iowa, where her father, Matthew Bucksbaum, developed a massive shopping mall empire.

In 2017, when Washington Mayor Muriel Bowser picked Friedman to restore and develop the old Franklin School building, she pledged to use at least $20 million of her own money to create the museum. (Other major donors include Bloomberg Philanthropies and Blackstone CEO Stephen A. Schwarzman and his wife Christine.) Although it is not part of the Smithsonian Institution, Planet Word is free to all visitors.

The idea for the museum first came to Friedman when she visited the National Museum of Mathematics in Manhattan. The reading teacher in her grew competitive as she walked through the museum.

“They had all this great publicity when they opened about the cool galleries and exhibits that they had done to bring math to the world,” Friedman said. “Math is good. I like math. But we’re really much more important to our country, and to me personally.”

As a retiree with free time and a sizable budget, Friedman set off on a national tour of “different museums that had something about language arts,” including the Strong Museum — the National Museum of Play — in Rochester, N.Y.; The Tech Interactive in San Jose, Calif.; and Liberty Science Center in Jersey City, N.J. None of these were focused on language, but each had an exhibit devoted to communication.

Once she decided to forge ahead with the idea for a museum, Friedman knew she needed outside help. “I started building a governing board and advisory board to educate myself, because I know reading and teaching and education, but not museums, and not anything about linguistics,” she said.

This meant not just bringing on linguists, but also finding experts in museum curation and design, as well as people who could restore a historic building that was left abandoned in bad shape after last being used as a homeless shelter.

“The hardest thing was managing people. I had never been the boss of that many people,” Friedman noted.

Friedman points out that every available space, including the first-floor reception area before visitors enter the exhibits, is covered with something related to language.

Each locker, where visitors can leave their belongings, is numbered — and annotated with the spelling of that number in a different language, written in the International Phonetic Alphabet. This is a system devised by linguists so that people can sound out a word in a language they don’t speak, using a universal set of phonetic sounds.

The floor leading up to the check-in desk is covered in letters, symbols and hieroglyphics that are spread like a spilled bag of the magnets one might put on a refrigerator. They are grouped by history and language family.

And the restrooms, whose walls feature bathroom-related sayings taken from literature like “To pee or not to pee?” or “I stink, therefore I am,” were recently nominated for “America’s best restrooms,” an actual distinction that is awarded by the cleaning services company Cintas.

When it comes to the actual exhibits, everything is created for user interaction.

The Word World shows a several-foot-high image of interconnected landscapes — a lush forest, a vibrant pond, a city street lined with tall buildings — flowing seamlessly between the three walls. “Grab a brush,” Friedman commanded. “They’re smart brushes. ‘Dip’ them into a word and you paint the walls with that word.” Each word “painted” the scene: “Autumnal” covered the trees with orange and yellow leaves, while “crepuscular” darkened the image to the shades of blue, purple and pink that appear at twilight. The sound of birds chirping filled the room.

Book lovers like Friedman will be most excited by the Magical Library, an ornate, wood-paneled room that looks like the interior of an old English castle. Books, arranged by color, line the walls; a mirror on the ceiling makes the room feel endless. Visitors can pick up any of the dozens of books on display and place them under the light on the reading tables, where a special scanner “reads” them and launches into an animation and audio recording that provides historical and literary context on the book and its author.

Friedman picked up Anne Frank: The Diary of a Young Girl, and the book came to life: Frank’s handwriting was illuminated onto the pages of the book, and an image of Frank appeared above the text. “While we get huge insight into who she is as a person,” the narration says, “we also have the constant threat of Nazi occupation, and of possible capture and murder of her and her family at the hands of the Nazis.”

Another exhibit allows visitors to “practice” their foreign language skills with speakers of 28 different languages. Friedman walks up to a tablet and begins the Hebrew lesson, which is taught by the 12-year-old daughter of friends. “The [museum’s] ambassadors are middle aged or young adults, but I went to her bat mitzvah, and she was so well-spoken, that I said [to her parents], ‘Will you let her be our language ambassador?’” Friedman recalled.

The brief lesson involved an explanation of how Eliezer Ben-Yehuda modernized Hebrew in the late-19th century, along with some of the words he created — like tapuz, orange, created from a mishmash of the words for “apple” and “gold.”

Friedman, who described her Jewish upbringing as “very Reform,” spent several years in Israel in the 1980s when her husband, The New York Times columnist Thomas Friedman, served as the paper’s Jerusalem bureau chief.

“I went to ulpan, and then I kept getting pregnant,” Friedman recalled, laughing. “I had enough [fluency] to do grocery shopping and things like that. But never an advanced level with Hebrew.” Their two daughters inherited their parents’ love of words: One created and runs a private school in San Francisco, and the other is the weekend executive producer of NPR’s “All Things Considered.”

After a late October opening last year — delayed from a planned May 2020 opening — the museum operated for just five weeks before a pandemic-mandated shutdown that lasted until April of this year. The pandemic has affected the museum in other unexpected ways: A popular photo booth, where visitors act out SAT vocabulary words, is closed until further notice because the paper used to print the images is only available from a Chinese manufacturer, and supply chain delays have made it impossible to deliver.

Everything at the museum is kid-friendly (although some of the material, like a room where visitors can try to write creative advertising copy, is too advanced for them), and while some camp groups came for field trips over the summer, Friedman is eager for school groups to regularly visit the museum when pandemic restrictions ease. Right now, only 100 people are allowed to enter the museum every hour.

At the end of the tour, she had to run back to her office — that night, the museum would be hosting 250 teachers in a sold-out educators night to introduce them to the museum’s content. After all, Friedman added, “teachers have never had a language arts museum to visit.”