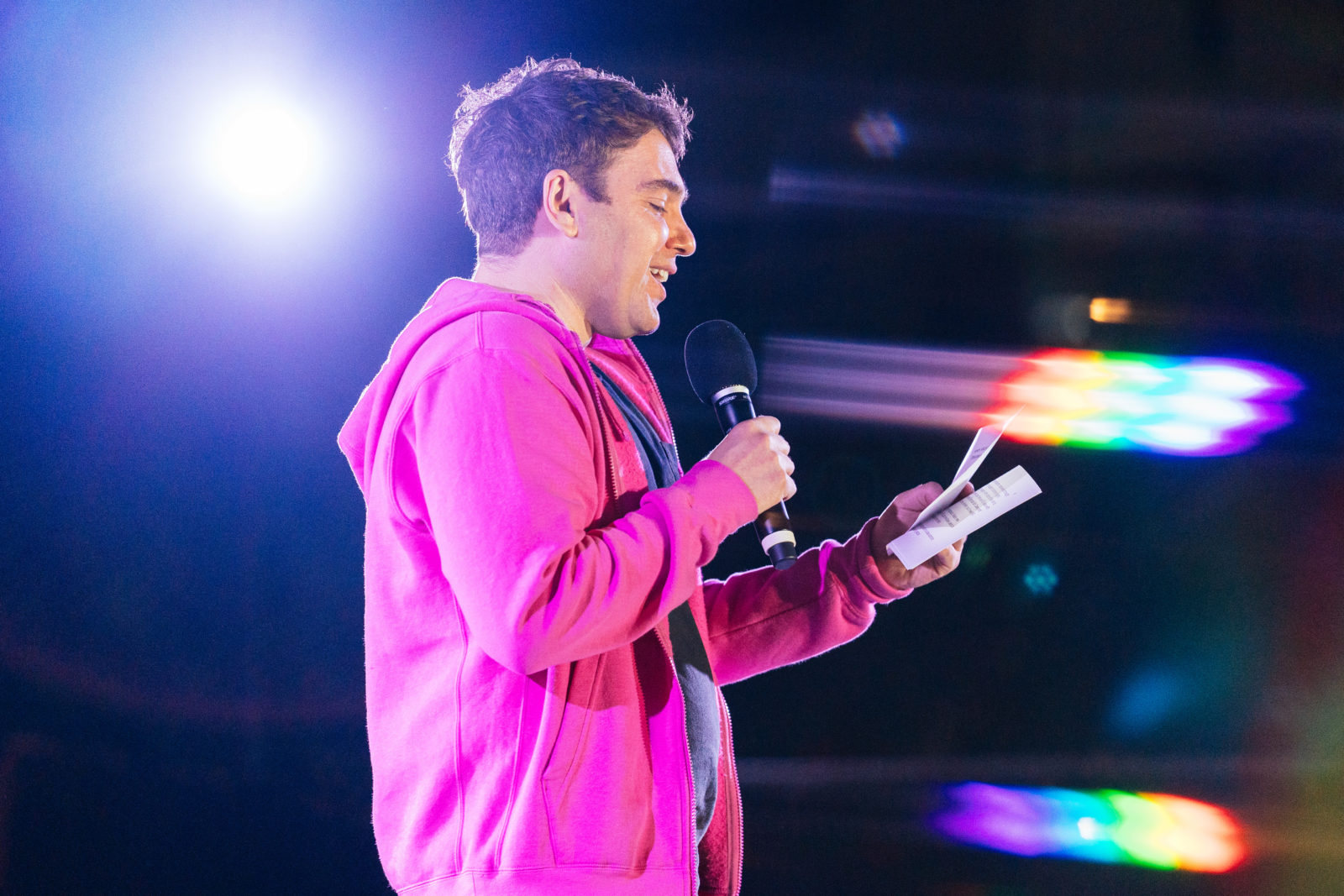 The podcaster and progressive activist is leaving L.A. (and Zoom) and taking his pointed comedy show on the road

Jon Lovett, the former Obama speechwriter, progressive podcast host and stand-up comedian, seemed eager to hone his act in an interview with Jewish Insider last week before returning to a live stage for the first time in 18 months.

“I’m really excited to go back to it because if I don’t get applause, my doctor says I could get very sick,” Lovett deadpanned, testing out a gag over the phone.

Before the pandemic, Lovett, 39, hosted a raucous weekly podcast, “Lovett or Leave It,” in front of a live audience, often in his home city of Los Angeles.

For the past year-and-half, he kept his show going remotely, as best he could, on Zoom, recording interviews with a wide assortment of comedians, journalists, politicos and other guests “in front of a needy golden-doodle,” as a facetiously updated tag line informed viewers tuning in from home — an allusion to Lovett’s beloved dog, Pundit.

Now, Lovett is stepping back onto the stage — no doubt Pundit could use the reprieve — as he embarks on a series of weekly outdoor shows, “Lovett or Leave It: Live or Else,” which began last Thursday at the Cinelounge in Hollywood and will culminate in a performance at the Beacon Theater in Manhattan on Nov. 12, as part of the New York Comedy Festival. Lovett’s panelists have so far included Rep. Adam Schiff (D-CA) and B.J. Novak, the actor and comedian, with future guests yet to be confirmed.

“Doing jokes over Zoom, you know, we made it work,” Lovett said. “I’ll be glad to not do it for a while.”

Lovett, who is Jewish, has been regaling listeners with his charmingly anachronistic brand of Borscht Belt-inflected political commentary — he sometimes sounds as if he is channeling a Catskills tummler à la mid-20th-century Mel Brooks, his favorite comedian — for years.

He is credited with penning some of former President Barack Obama’s funniest lines before leaving the administration to write a short-lived sitcom, “1600 Penn.” Lovett began podcasting in 2016..

Though Lovett admits that he is “super rusty” after months of video interviews, he is looking forward to perfecting his on-stage approach as he takes his show on the road.

“There’s going to be a lot of experimentation and trial and error,” he said, off-handedly mentioning the possibility of interactive games with the audience whose details he did not disclose.

But it isn’t all light-hearted. Lovett launched Crooked Media, the left-wing media company whose growing slate of podcasts includes “Lovett or Leave It” and “Pod Save America,” its flagship show, four years ago in partnership with a duo of former Obama staffers and comrades in arms, Jon Favreau and Tommy Vietor.

Dismayed by the election of former President Donald Trump, the company’s founders, aggressively activist from the start, soon established themselves as leading voices in the anti-Trump resistance.

The live podcasts “were a really good example of that,” he said. “It wasn’t just about hearing people laugh. It was saying, like, ‘Hey, we’re here, we’re doing these shows across the country, we’re going to where you are, we’re trying to push people to get in the fight, to get involved, to be part of a community of people that want to fight back against Trump.”

With President Joe Biden in the White House, that mission has mutated slightly as Crooked Media expands its podcast offerings to include some that Lovett says still “get at the core of what Crooked does,” including a new show by Washington Post journalist Jason Rezaian about his experience being held hostage in an Iranian prison for 544 days.

Still, while the anti-Trump project may seem less urgent to some, Lovett insists that complacency is not an option as the former president mulls another bid for the White House while continuing his effort to cast doubt on the 2020 election results.

“Let me say, I have not felt OK in a very long time,” Lovett told JI. “I don’t think feeling OK is the right way to feel. We have a Democratic president. You know, if history repeats itself, an incumbent president tends to lose seats in the midterms. Just with the power of redistricting, Republicans may be able to rack up enough seats to take back the House. So no, I don’t think anybody should feel OK. People should feel really concerned and make sure that they’re doing everything they can.”

Though the 2022 midterm elections are still more than a year away, Lovett and his colleagues believe that early engagement is crucial if Democrats have any hope of maintaining their tenuous hold on the House and Senate. They recently launched a campaign called “No Off Years” via Crooked Media’s political arm, Vote Save America, with a goal of assisting candidates  in such crucial swing states as Arizona, Florida, North Carolina and Pennsylvania through early voter registration and targeted fundraising.

“I think we can help show people the way that they can make a difference even in the off years and show people where their effort and attention can be most useful,” Lovett argued, “even when the nightmare daily Trump emergency is different.”

With Trump not in office, “it might be easy to kind of say, like, ‘See, we took care of it,’” Lovett added. “There’s a kind of effort to forget just how bad things got, how much worse they could get, and I think keeping people engaged is really important — because that’s one of the lessons of the years that led to Trump.”

Lovett isn’t exclusively focused on domestic politics. Last May, as violence intensified between Israel and Hamas, he joined his “Pod Save America” co-hosts for a wonky foreign policy discussion that took something of a personal turn when, early on in the exchange, Lovett described his own view of the conflict as a self-declared Zionist dismayed by Israel’s military actions.

For Lovett, “Zionism means not just Israel’s right to exist, but also comes with a set of values that Israel has to live up to,” he told JI, characterizing his previous remarks.

“This is what it means to me to have been raised in a Jewish household to believe in Zionism,” said Lovett, who grew up on Long Island, “and to do so while trying to uphold, I think, the Jewish values that I was raised with, as well, that I view as core to being Jewish.”

Lovett’s perspective, no matter how heartfelt, irked some listeners during what was then a politically charged moment on the left.

Even amid so much heaviness, Lovett believes it is incumbent upon folks like him to carve out a space for humor.

“But we have to stay in the fight, and they want people to be exhausted and miserable, and if we are, they win,” he said of Trump’s supporters. “So it’s important to find humor in things.”

Doing it in front of an audience after a long absence only adds to the appeal, Lovett suggested.

“I really missed that connection to people,” he said of his live podcast shows, “and I always felt really proud that this was a group of people that would come out every Thursday or come to shows across the country and feel like they were part of a community.”

Lovett had more company than just Pundit and his remote audience during the pandemic. He is engaged to investigative journalist Ronan Farrow, who proposed two years ago in a draft of his book Catch and Kill: Lies, Spies, and a Conspiracy to Protect Predators.

Asked if they were married yet, Lovett guffawed.

“Do you know what would happen if I told you that we were married and my mother saw a link to this piece that said we were married already?” he said. “I would hear the shouting from Boynton Beach, Florida. We are not married yet.”