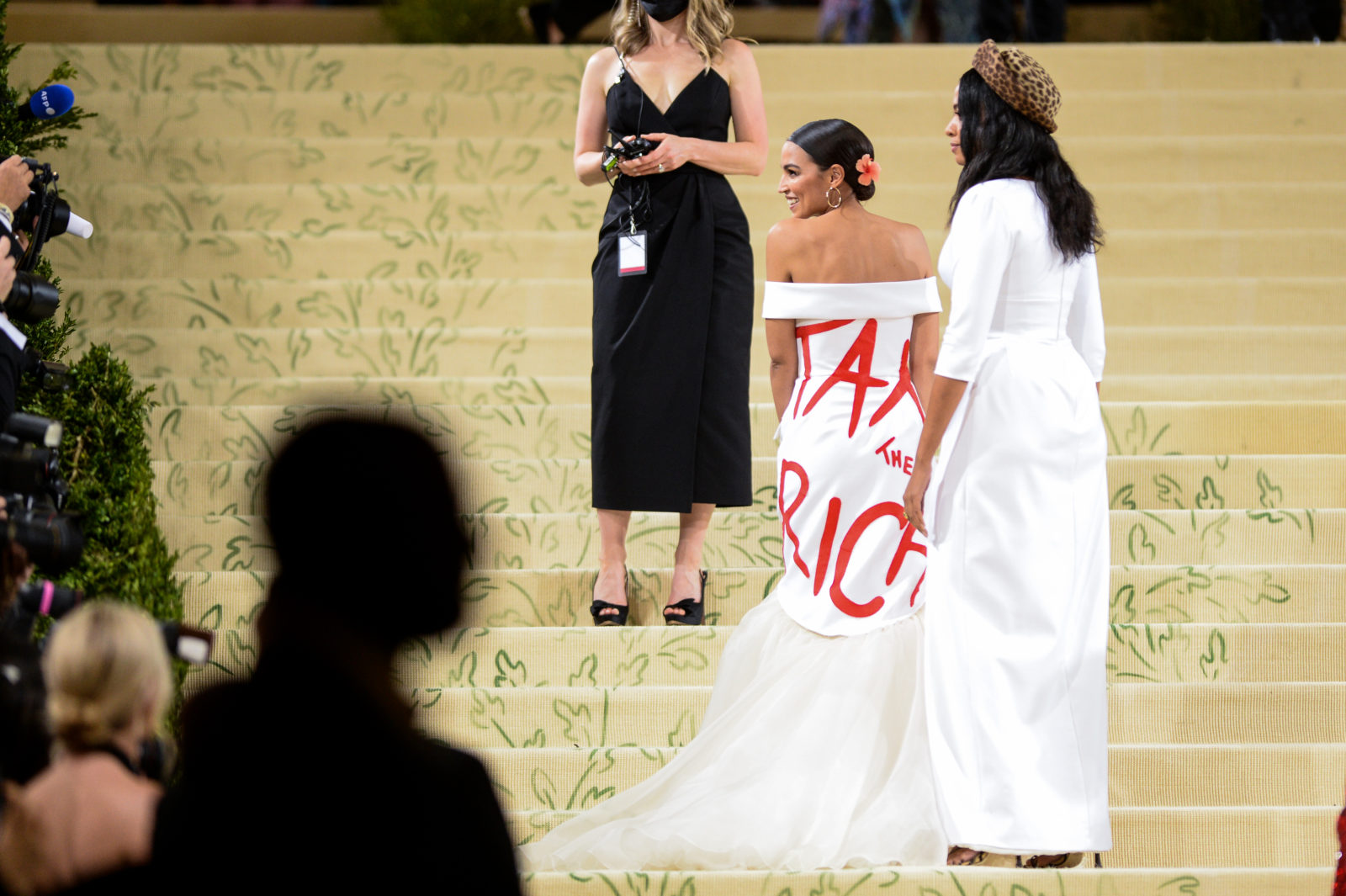 The Met Gala and the far-left vs. the far-right

'The Squad is culturally fashionable, and AOC just proved it by getting an invite and rocking a controversial dress at the Met Gala'

Rep. Alexandria Ocasio-Cortez (D-NY) set off a days-long firestorm of media commentary last week when she arrived at the Met Gala in Manhattan wearing a white Brother Vellies dress emblazoned in bold red letters with the not-so-subtle phrase “Tax the Rich.”

The two-term New York City congresswoman, an avowed socialist who casts herself as a champion of the working class, was widely criticized as out of touch for attending the elite, $35,000-a-ticket fund-raising event, where she shared a table with co-host and Condé Nast artistic director Anna Wintour. Even some progressives renounced the gesture as superficial.

Viewed at a broader angle, however, the controversy was a confirmation that Ocasio-Cortez, 31, has achieved a level of celebrity such that even an anodyne slogan written across the back of a designer gown was capable of driving the news cycle for multiple days.

“She is a genius of our time in the sense of what is required to get ahead these days in politics,” Mona Charen, the policy editor of The Bulwark, a conservative news and opinion site, told Jewish Insider in a recent interview. “It’s a talent for self-promotion, and she has that in spades.”

For some Jewish leaders and commentators, the congresswoman’s high-profile appearance at New York’s most exclusive fête underscored how some far-left lawmakers are increasingly accepted in mainstream culture — in contrast to right-wing provocateurs in the House who are largely shunned from such events and tend to operate in their own isolated silos on the margins.

“The Squad is culturally fashionable, and AOC just proved it by getting an invite and rocking a controversial dress at the Met Gala,” said Thane Rosenbaum, an author and distinguished university professor at Touro College, referring to the growing coalition of powerful House Democrats including Rashida Tlaib (D-MI), Ilhan Omar (D-MN) and Ocasio-Cortez, who is known colloquially as AOC. “Conservative Republicans wouldn’t receive an invite to a Greek diner on Madison Avenue.”

The Met Gala stunt may have missed the mark somewhat because the policy proposal Ocasio-Cortez was presenting as subversive is already popular among the majority of Americans, who believe the wealthiest earners should pay more in taxes, according to recent polling.

Still, Ocasio-Cortez defended her approach in an Instagram post after the event. “I thought about the criticism I’d get, but honestly I, and my body, have been so heavily and relentlessly policed from all corners politically since the moment I won my election that it’s kind of become expected and normalized to me,” she said, adding: “The more intersections one has, the deeper the disdain.”

But Jewish leaders expressed concern that Ocasio-Cortez and her allies in the House are leveraging their outsized cultural influence to smuggle in views that until recently were taboo within the Democratic Party, including, among other things, calls to withhold American aid to Israel.

“For me, what’s particularly concerning about that is that this is a moment of tremendous hope right now,” said Barry Shrage, a professor in the Hornstein Jewish Professional Leadership Program at Brandeis University, alluding to the new unity government in Israel. “This is the time when people, at least on the center-left, ought to be able to say, ‘Hey, it’s really time to give Israel a chance to make steps toward peace.’”

He wasn’t getting his hopes up. “This is something that the Squad is going to fight against with all their might,” said Shrage, the former president of the Combined Jewish Philanthropies of Greater Boston.

On Tuesday, a group of prominent House progressives successfully pressured Democratic leadership to remove $1 billion in missile-defense funding for Israel’s Iron Dome system from a spending package designed to avert an impending government shutdown. The progressives, including Ocasio-Cortez and Omar, threatened to vote against the bill if the funding remained.

“The fact that there are members of Congress who wish to stop funding to this life-saving system is deeply concerning,” said Eric Lynn, a Democratic congressional candidate in Florida who, as a former Pentagon staffer in charge of Israeli defense initiatives, helped convince the Obama administration to fund the Iron Dome system. “I am outraged to hear this. To be clear, this funding that is being threatened is not new funding or an increase in funding, but sustained funding that has been promised.”

The Iron Dome showdown was just the latest escalation in an ongoing intra-party feud over Israel that has grown increasingly contentious in the months following the May conflict between Israel and Hamas. Last week, Ocasio-Cortez introduced an amendment that would block a $735 million arms sale to Israel, following a previous failed effort to submit a resolution condemning the sale.

Moreover, a number of progressive House candidates,who are running for office this cycle, have called for conditioning aid to the Jewish state.

Beyond foreign policy, some progressives have been accused of using antisemitic language while addressing Israel or social issues more broadly. This has caused alarm among Jewish leaders who fret that such rhetoric may become normalized on the left because it emanates from high-profile lawmakers in the House.

Omar and Tlaib, for instance, two of the most outspoken Israel critics in Congress, have been criticized for invoking antisemitic tropes. Omar has suggested, among other things, that Israel “has hypnotized the world,” while Tlaib was recently accused of “antisemitic dog-whistling” while addressing a convention of the Democratic Socialists of America.

“For me as a Palestinian-American, we also need to recognize, as I think about my family and Palestine, that continue to live under military occupation and how that really interacts with this beautiful Black city that I grew up in,” Tlaib said. “I always tell people that cutting people off from water is violence. And they do it from Gaza to Detroit. And it’s a way to control people, to oppress people and it’s those structures that we continue to fight against.”

“Sure there are some alt-right extremists who hate Jews, but where are they, how many are they, and what possible influence could they have, as compared with progressives on college campuses and in media (mainstream and social), who have cultural cache, social influence and serious numbers behind them,” Rosenbaum said in an email to JI. “And they have high-profile platforms from which to speak: lecture halls, favorable press, and throngs of Twitter and Instagram followers.”

For Rosenbaum, it comes down to, as he put it, “much smaller numbers, negligible social capital and cultural irrelevance that distinguishes progressives from extremist Republicans.”

That’s not to imply that Jewish leaders are unfazed by right-wing antisemitism. “That’s an ongoing concern for the whole Jewish community and the leadership of the Jewish community,” said Shrage. “Nobody backs away from that. I mean, it’s just like, how many times can you say that she’s an idiot over and over again and that she’s an antisemite and that she’s dangerous,” he added, referring to Greene, who made headlines in January when she suggested that California wildfires were caused by a space laser controlled by a Jewish banking family.

“Of course, the Trump phenomenon magnifies the power and makes you worry about the power of the right,” Shrage told JI. “So you’ve got both those things happening at the same time.”

But in “the intellectual life that most of us will encounter on the campus, it’s the other one,” he said. “There’s no support for the right on the campus or in the corporate world or in all the other places where the debates over intersectionality take place,” Shrage added, referring to an academic concept about overlapping layers of identity that some Jews believe discounts their oppression. “In all of those places, there are important cultural issues at stake that affect the Jewish people in an important way.”

James Kirchick, a visiting fellow at the Brookings Institution and a columnist for Tablet, echoed that view.

“As we have seen in just the past few years, arcane concepts and obscure jargon that were once the sole province of university ethnic studies departments are now the dogma of major corporations, national newspapers, prominent museums and Hollywood celebrities,” he told JI in an email. “It is therefore understandable that (some) Jewish and pro-Israel leaders would be more alarmed with the antisemitism and hostility of the Squad — better understood as social media influencers than legislators — than a crackpot like Marjorie Taylor Greene.”

It is perhaps impractical to imagine Greene attending the Met Gala, simply because it would never happen. But that may be the point.

“Why the obsession with AOC? As in the inter-war years so [too] now, the Jewish left attracts more attention from the Jewish community because it is peopled by ‘our own children and grandchildren,’” Jonathan Sarna, a professor of American Jewish history at Brandeis University, told JI. “There are Jews on the extreme right too, and always have been, but it is the Jews on the left who historically have both echoed ‘prophetic ideals’ and endangered Judaism and the Jewish future.”