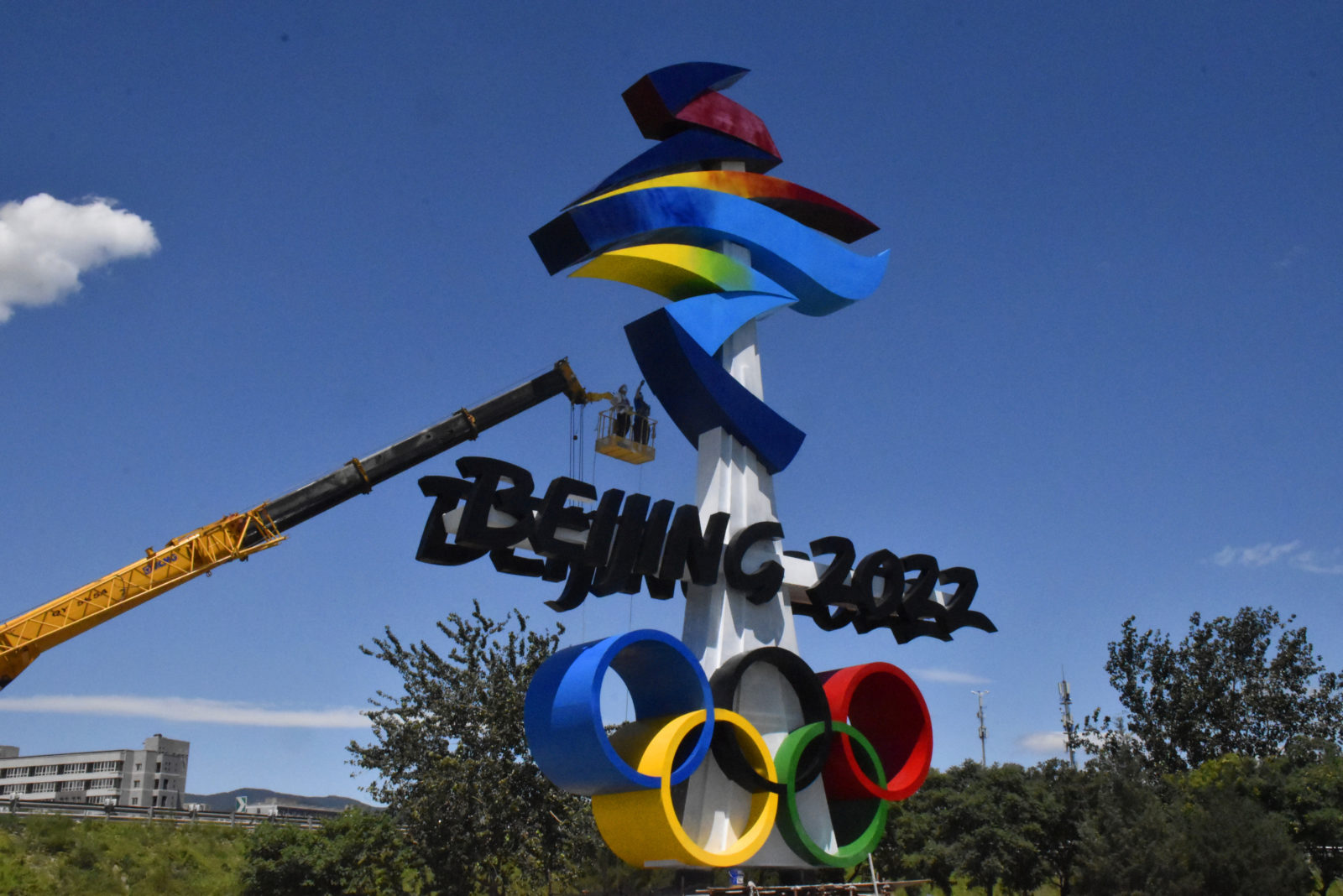 At the start of the 1936 Summer Games, the final runner in the torch relay arrived in Berlin with the Olympic flame. The man, wearing an all-white running ensemble, stood next to dozens of Nazi soldiers in dark uniforms and leather boots. They stood among hundreds of athletes, surrounded by massive Nazi flags adorned with swastikas.

This was Adolf Hitler’s Germany. He presided over the Games’ opening ceremony. The government had removed most of its anti-Jewish signs in the capital before spectators and athletes arrived, but Jews from the U.S. and around the world had been speaking for months about the horrors that were beginning to unfold in Germany.

A handful of Jewish athletes and Jewish organizations in the U.S. called for a boycott of the Games. While the idea spread among a handful of university presidents and Catholic groups, nothing significant came of it.

After the Tokyo 2020 Summer Games came to an end last week, a number of Jewish organizations in the U.S. and abroad are again seeking to call attention to another Olympic Games hosted by a country widely known for human rights violations. This time, it’s China — and instead of hosting an opening ceremony with swastika flags in the background, the country will welcome athletes from more than 200 countries against the backdrop of its widespread persecution of Uyghur Muslims in Xinjiang.

“It was very clear that there are similarities with what’s happening in Beijing as to what was happening in Berlin in 1936, leading up to what would be the beginning of a horrific Nazi era that would lead to death and destruction for millions of Jews and millions of other people as well,” said Serena Oberstein, executive director of Jewish World Watch, a Los Angeles-based human rights organization.

Jewish World Watch is a leading member of the Berlin-Beijing Coalition, a Jewish-led interfaith network demanding a diplomatic boycott of the 2022 Winter Games.

“We feel like an overall boycott doesn’t make sense, because there are lots of athletes, Jewish and not, from a variety of countries who have worked their whole lives to compete in these Games, and we don’t want to punish the athletes,” Oberstein told Jewish Insider. “However, U.S. leadership, European leadership, any sort of showing of diplomats supporting what they know is going on in China — [that] goes against any moral and ethical compass that those of us who hold values of human rights and dignity uphold.”

The members of the Berlin-Beijing Coalition do not include the most prominent national Jewish organizations in the U.S., and many of them have not yet stated whether they will take a position on next year’s Olympics.

A spokesperson for the Jewish Federations of North America declined to comment, saying the organization does not typically weigh in on international issues. Representatives of the Conference of Presidents of Major American Jewish Organizations and the Anti-Defamation League declined to comment. The Orthodox Union Advocacy Center did not respond to requests for comment.

The American Jewish Committee, which has spoken out against China’s treatment of the Uyghurs but has not previously announced a stance on the Beijing Olympics, told JI that the organization would support a diplomatic boycott of the Games.

“The 2022 Olympic Games in Beijing is an opportunity for the United States to lead in protesting China’s treatment of the Uyghurs and Hong Kong. The U.S. government should not send any official representation and discourage American spectators from attending,” said AJC CEO David Harris. “NBC and other media should cover fully the human rights abuses situation in China. American athletes, who have trained hard for years, however, should be allowed to compete, and bring home medals.”

After adopting a resolution in April 2021 condemning the Uyghur genocide, the Jewish Council for Public Affairs — an umbrella organization representing Jewish community relations groups — begun discussing its plans for the Beijing Olympics. “JCPA has previously encouraged U.S. officials to use the Olympics as an opportunity to highlight opposition to China’s human rights abuses, and we would expect our country to continue those efforts next year,” JCPA associate director for policy, advocacy and communications Tammy Gilden told JI.

President Joe Biden has not said whether he will attend the Winter Games, and his administration has not offered details on how it will approach the event. (First Lady Jill Biden attended the Tokyo Olympics last month, and Second Gentleman Doug Emhoff will lead the U.S. delegation to the Paralympics in Tokyo later this month.)

State Department spokesperson Ned Price told reporters yesterday that the U.S. is “consulting closely with our allies and partners” to “define those common concerns and to establish a shared approach. But again, I don’t want to get ahead of where we are, given that we still have some time to go.”

A diplomatic boycott has widespread support in Congress, including from House Speaker Nancy Pelosi (D-CA). “It just seems so strange that we would have history repeat itself,” she said in a May 2021 speech, comparing the 2022 Beijing Games to the 1936 Berlin Games. “For heads of state to go to China in wake of a genocide that is ongoing while you’re sitting there in your seats really begs the question: What moral authority do you have to speak again about human rights any place in the world if you’re willing to pay your respects to the Chinese government as they commit genocide?”

At a congressional hearing last month, bipartisan lawmakers pressed senior executives from some of the major companies sponsoring the Games on how they will use their influence to speak out about China’s treatment of Uyghurs, which former president Donald Trump officially deemed a genocide on his last day in office.

“We do not have a say in the selection of the host city, nor on whether an Olympics is postponed or relocated,” Coca-Cola’s global vice president for human rights, Paul Lalli, said at the hearing. His prepared testimony about the company’s commitment to human rights did not mention the Uyghurs.

“There are 82 multinational corporations that are doing business in China and using Uyghur forced labor in their supply chains. We’ve identified at least four of them that have direct ties to the Holocaust,” said Oberstein.

One of those four is Coca-Cola, which created Fanta in Nazi Germany due to embargoes that kept Germany from importing the syrup used to make Coke. “Our hope is that the sponsors do pull out of the Games and hold China accountable,” Oberstein added.

Although many national Jewish organizations have not taken the same stance regarding the Olympics as Oberstein’s organization, it has become a point of concern for many Jewish advocacy groups.

But the Jewish community in the United Kingdom has coalesced more clearly around the cause, led in part by Chief Rabbi Ephraim Mirvis, who signed onto a campaign seeking to pressure the companies that are sponsoring or profiting from the Winter Games. “We must ensure that the Winter Olympics becomes a platform for solidarity with the Uyghur population rather than a tool for distracting the world from this most appalling injustice,” he said in June. The Board of Deputies of British Jews put out a statement last month calling for a diplomatic boycott.

“When we introduced the issue of the Uyghurs [2.5 years ago], the response from the community was remarkable and really cut across all stakeholder groups, from community leadership to youth movements to spiritual leadership to different individuals,” said Mia Hasenson-Gross, executive director of René Cassin, a leading Jewish human rights group in the U.K. “Two and a half years down the line, the U.K. Jewish community is believed to be by far the leading faith community in the U.K. speaking out and acting on behalf of the Uyghurs.”

Irwin Cotler, an international human rights lawyer and Canada’s special envoy on preserving Holocaust remembrance and combating antisemitism, told JI that democratic countries and institutions were slow to speak out because of China’s global influence.

“It wasn’t only Jewish community organizations, but I would say the community of democracies that was slow to reach that position [against China’s treatment of Uyghurs],” Cotler argued. “It was because China was using its economic power in an asymmetrical way to bully the democracies.”

Cotler believes the Games should be relocated, not just subject to a diplomatic boycott. He also argued for a similar boycott prior to the 2008 Summer Games in Beijing. “It isn’t only the Uyghurs,” Cotler explained. “It’s the targeting of what China’s called the ‘five poisons’” — Uyghurs, Hong Kongers, the Falun Gong, Tibetans and Taiwanese.

“The Holocaust was really unique. I make no analogies,” said Cotler. “That being said, genocide is still genocide.”