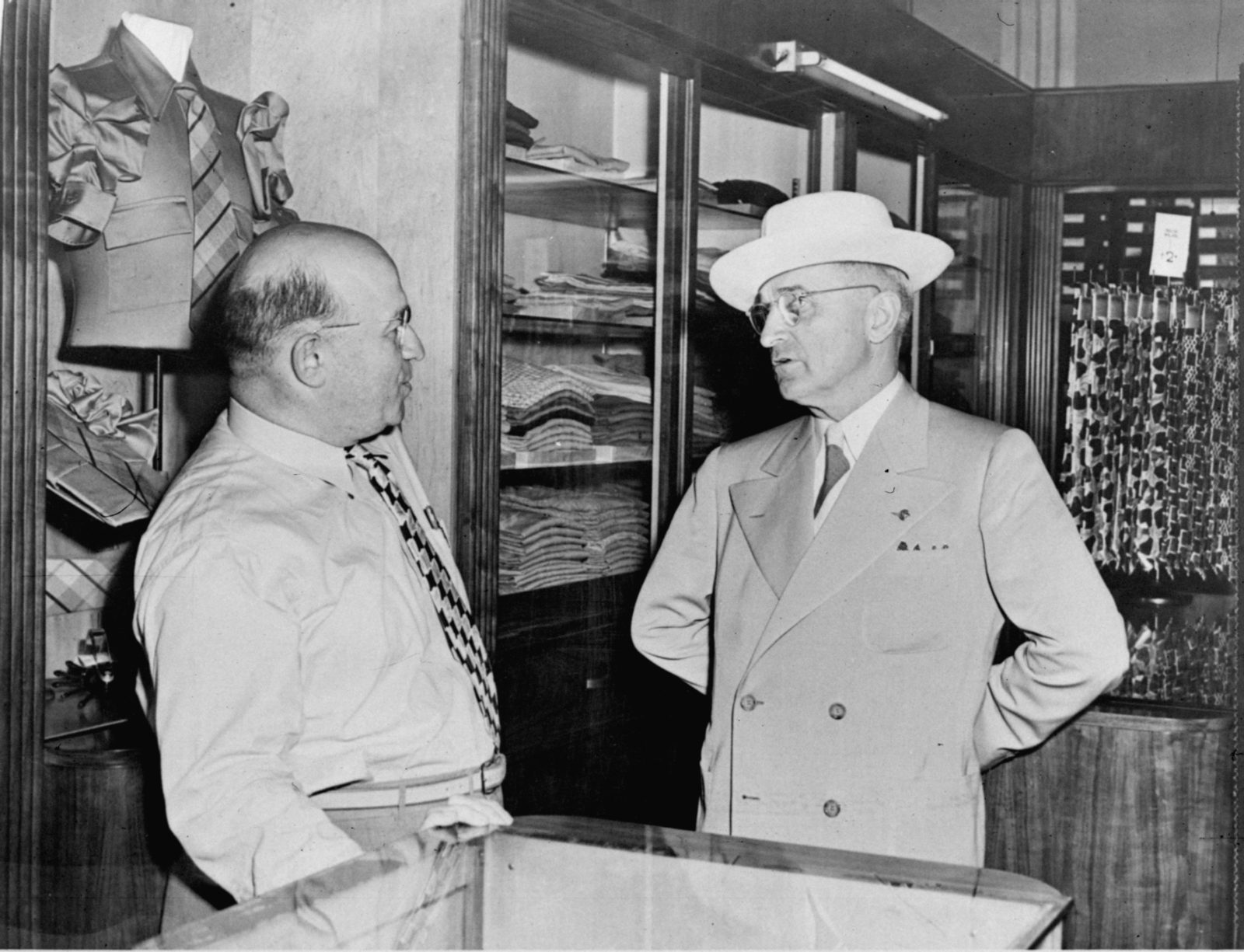 In his new book, Gary Ginsberg chronicles the most impactful presidential friendships including Eddie Jacobson and Vernon Jordan

Gary Ginsberg, a former political strategist and longtime media executive, decided to write his new book, First Friends: The Powerful, Unsung (And Unelected) People Who Shaped Our Presidents, during the Trump administration.  He perceived that the former president, in contrast to others who previously held the office, had no friends in his immediate orbit willing to give it to him straight when  a bit of real talk could have been helpful.

“One of the real benefits to having a first friend is the ability to speak the blunt truth, the unvarnished truth, and it struck me, with [President Donald] Trump, that there really wasn’t that person,” Ginsberg, 58, told Jewish Insider last month over lunch in the West Village, where he lives with his wife and two sons. “I was able to confirm that with somebody very close to the president who also recognized that void in his life.”

In the final, tumultuous months of Trump’s presidency, Ginsberg argues, that void was particularly glaring — and ultimately harmful. “To have somebody who could have said to the president, ‘Look, you have the opportunity now to leave this office with dignity, get off this ‘big lie,’ and do what’s right for yourself and for the country,’” Ginsberg mused. “But there was really nobody who said that to him.”

Still, the idea for the book, published by Twelve and released last week, had been gestating for decades. “On the positive side, and one of the reasons why I wanted to write the book,” Ginsberg said, “was that I saw in my own life, and then in my own work experience, the value of a first friend.”

Ginsberg, whose multi-hyphenate career includes high-level positions in law, politics, media and corporate communications, first observed that dynamic in 1984 as a 21-year-old staffer on former Sen. Gary Hart’s presidential campaign. He took note of the Colorado senator’s friendship with the actor Warren Beatty, one of the only people who could speak matter-of-factly with the candidate. “He’d say, ‘Gary, stop acting and talking like a politician,’” Ginsberg recalled.

Later, working on Bill Clinton’s presidential bid, Ginsberg witnessed the power of friendship during the New Hampshire primary when Clinton’s allies “rescued the rocky candidate by traveling to the state to personally reassure skittish voters of his character and integrity,” as he writes in First Friends. In the book, Ginsberg details Clinton’s close personal relationship with Vernon Jordan, the civil rights leader who died in March — one of nine chapters on friendships including Thomas Jefferson and James Madison, Franklin Pierce and Nathaniel Hawthorne and Franklin Delano Roosevelt and Daisy Suckley.

Some friendships came to him after diligent research, but when he sat down to begin working on the book, there was at least one story Ginsberg knew he wanted to write: the relationship between Harry Truman and Eddie Jacobson, a Jewish haberdasher who played a key role in convincing his longtime friend from Kansas City to recognize the state of Israel in 1948.

“For me, it was the most consequential moment of the book in terms of a friend’s influence,” Ginsberg said, “a friend calling on all the tools that a first friend has to influence a decision for the betterment of the country and the world.”

Without Jacobson’s vociferous lobbying, Ginsberg argues, it is uncertain whether Truman — who was facing fierce opposition from some of his own advisors — would have supported the fledgling Jewish state. “It’s a precarious time because Truman has the State and Defense departments basically arguing that the Partition Plan is not good for American interests,” Ginsberg said, adding that Truman was “frustrated as all hell by how much the Jews are pressuring him.”

Still, Truman’s decision, in the end, appears to have been motivated in large part by Jacobson’s advocacy.

The recognition by Truman “established a baseline of a relationship between the two countries that really matured from there,” Ginsberg said. “The fact that he did it 11 minutes after the declaration, and then stood behind it, was really significant. It silenced any doubters, because, you know, America was speaking with a mixed voice up until then.”

“There was no guarantee that we were going to continue to support the idea of a Jewish state, so for Truman to be so unequivocal about it and so quick about it was really important for establishing this alliance, which has endured a lot,” Ginsberg added. “That’s why I thought it was an important story to tell.”

For Ginsberg, who is Jewish, the story also resonates on a personal level. Ginsberg was raised in a Conservative Jewish household in Buffalo; two of his great-grandfathers were rabbis from Eastern Europe. He first visited Israel in 1977, during a teen tour while he was in high school. “I was mesmerized by the country,” he said. “We spent a week on an army base. We toured the whole country. It was a very different country than it is today. You can’t believe how primitive it felt.”

“I became a pretty ardent Zionist early on in my life from ’77 on,” said Ginsberg, who has family in Israel. He returned for a summer in 1983, when he studied at Hebrew University as a Dorot scholar.

Ginsberg got his undergraduate degree from Brown University, where he was a close friend of John. F Kennedy, Jr. He would later become a founding editor at George, the politics and culture magazine started by Kennedy in 1995. Ginsberg was with Kennedy the night before he died in a plane crash in 1999 at the age of 38; they talked at length about Kennedy’s plans for after George, which was failing at the time and would shutter two years later.

When asked, Ginsberg said his friendship with Kennedy, who is said to have harbored political aspirations, perhaps played a subliminal role in informing his new book.

“Maybe on a subconscious level, sure,” he acknowledged. “But, you know, John was a long way from being president of the United States. Unfortunately, we’ll never know whether he would have become a president.”

While the nine relationships in First Friends are presented in a mostly positive light, Ginsberg believes that there are moments when presidents have been led astray by their confidantes. Richard Nixon’s friendship with the Florida banker Charles “Bebe” Rebozo, he says, is a prime example.

“Nixon, immediately upon becoming president, enlisted Bebe in some of his most nefarious acts,” Ginsberg told JI. “On one level, it’s a beautiful friendship: Two men who can sit for hours in silence and revel in each other’s company. He spent more time with Bebe than he did with his wife, for sure, and vice versa. I mean, Bebe’s wife says, and it’s in the book, ‘Bebe has three interests, and I know I’m number three.’”

But Ginsberg is doubtful that Rebozo, whom he describes as a “pure aider and abetter” once Nixon was in the White House, could have acted as a check on his friend’s worst impulses. “If Bebe Rebozo had been able to say, ‘Dick, come on, I’m going to appeal to the better angels in your complex psyche,’ could he have had that influence? Hard to really see it.”

Fittingly, Ginsberg benefited from the help of a number of friends and acquaintances who offered editorial input as he made his way through a draft of the book — his first — last year.

David Remnick, the editor of The New Yorker, was on hand to give some guidance. “He was quite deep in the book and he showed me part of the manuscript and what I did was to do a kind of rough edit like any editor would, which is to say reading with a pencil,” Remnick told JI, adding that he offered Ginsberg “some suggestions on tightening things up” as well as “very ordinary editorial kibitzing.”

“Gary understands relationships better than anybody — how they work, how they shape the attitudes of powerful people, and how behind-the-scenes personal relationships can have broader public impact,” Alter told JI in an admiring email. “Presidents are people too, and their friendships are just as important to them as they are to ordinary people — maybe even more important, given all the pressure they’re under. Gary speaks the language of friendship fluently, so he was the perfect person to examine the largely uninterrogated influence of presidential friendships. Not everybody writing about politics speaks this language as fluently as he does — it’s a specialized instinct that not very many people have.”

Ginsberg, an avid reader of presidential biographies, has been interested in American political history since childhood.

“In the third grade, I watched a play about Abraham Lincoln being assassinated,” he recalled. “I was transfixed by Abraham Lincoln. I still remember, to this day, coming back from that play and just being utterly mesmerized by this character, Abraham Lincoln, and it just sent me on this lifelong journey to learn about presidents and ultimately work for one. That’s been a big kind of through-line in my life.”

Ginsberg served in the Clinton administration and later worked in executive positions at News Corp. and Time Warner. He has also led corporate communications at SoftBank.

Ginsberg had long wanted to write a book but never found time for it until the pandemic slowed things down. “I would say it was pretty high on my bucket list, probably along with winning the Masters golf tournament, but that was never going to happen,” he quipped. “I’ve always had the interest, and then with the pandemic, it really gave me an opportunity.”

He hopes to write more books, and some ideas are now percolating, but he declined to reveal any plans on the record.

For now, though, he is glad to have finally explored, in depth, a topic that has long been of interest to him, both personally and professionally.

“It was an arduous but ultimately satisfying process,” he said of writing the book. “I had a lot of friends who wanted to read what I was writing.”