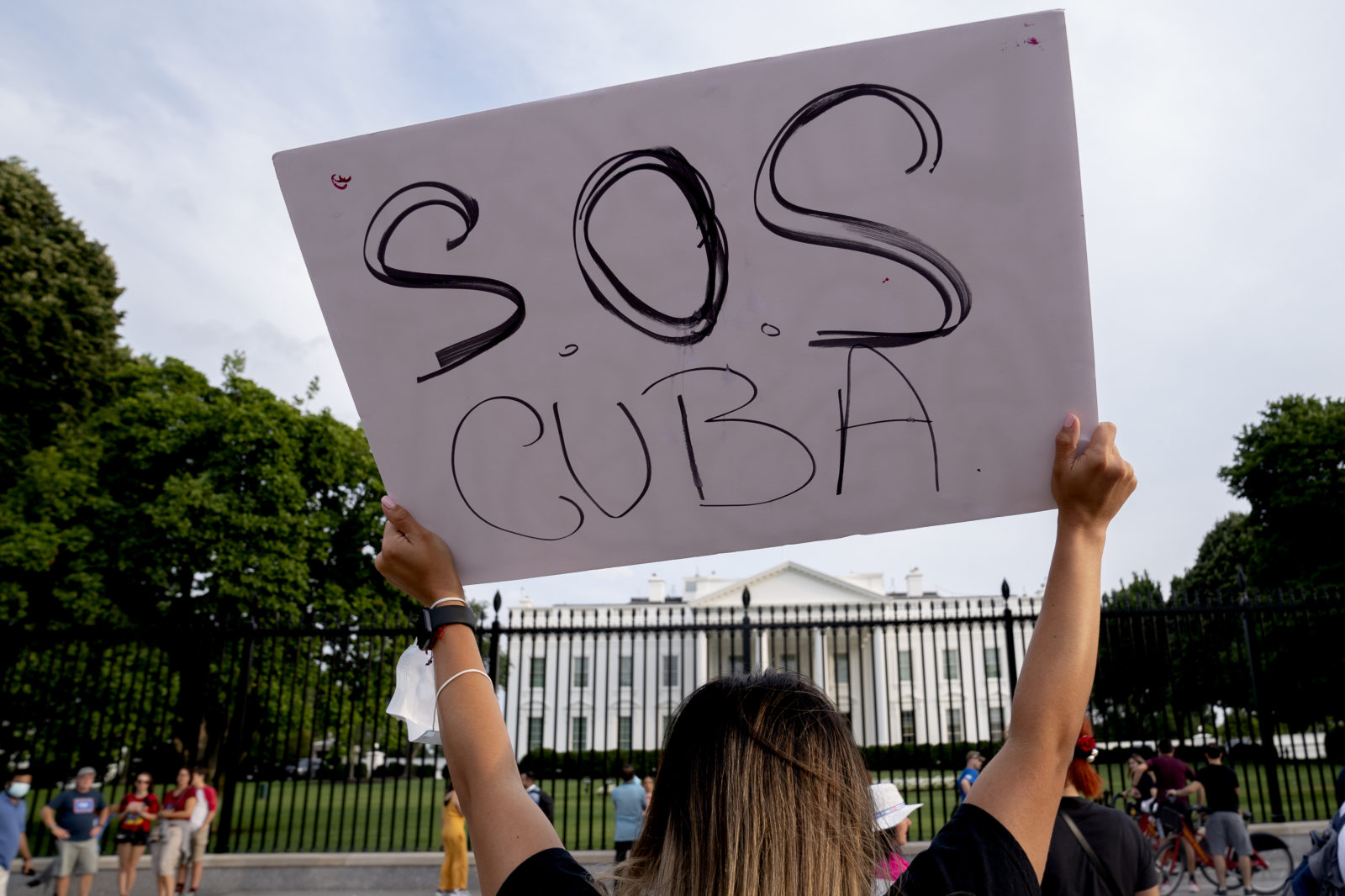 Cuban Jews step up for their patria

Pro-democracy protests in Cuba resonate with young and old Cuban Jews in the U.S.

“Patria y Vida” — “homeland and life” — is the chant that has animated thousands of pro-democracy protesters in Cuba, angry over economic shortages and rising COVID-19 deaths, over the past week and a half.

Members of the vibrant Cuban Jewish community in the U.S. have spoken out in support of the protests, hoping for a better life for people in their ancestral country. But many Cuban Jews have never been to their patria.

“I’m seeing millennials who are Cuban and Jewish talk about their frustration or their feelings on the protests in Cuba,” Janna Berenson, a 25-year-old Miami native whose mother was born in Cuba, told Jewish Insider. “I’m proud that they’re not leaving it to the people who came from Cuba to do all the talking when this is such a part of their identity.”

Nearly all of Cuba’s 15,000 Jews fled the country soon after Fidel Castro seized power in 1959. For people in Berenson’s generation and her parents’ generation, who fled when they were young children, Cuba is a place they have never visited or have no memory of. Many non-Jews from Cuba have come to the U.S. more recently, including a large wave of refugees in the 1990s.

“This is sort of a lost legacy — the fact that Cuba seems inaccessible to us in so many ways,” said Leon Rodriguez, who served as director of the U.S. Citizenship and Immigration Service during the Obama administration. “It does affect me in the way I think it probably affects a lot of other Cuban Americans.”

Despite the fact that most Cuban Jews in the U.S. left the country more than 60 years ago, their connection to the island nation remains strong. Support for the protesters comes naturally for a community of refugees who fled the Communist regime that still controls the country.

Suchlicki’s story is similar to a lot of Jewish Cubans: He was born in Cuba and came to Miami at the start of the Castro regime, but his family was not native to Cuba. His mother was born in Buenos Aires to parents who had fled pogroms in Poland, and his Russian father arrived in Cuba after being wooed by the weather.

“He got on the boat,” Suchlicki recalled. “The first stop of the boat was in Havana, so he got off. He liked the climate. He was living in a cold climate in Russia so he said, ‘Look, I’ll stay here for a while.’”

Because Cuba’s Jewish community came from elsewhere — mostly Eastern Europe and Turkey — many Cuban Jews in the U.S. also feel some connection to their ancestors’ original homeland.

“As is the case with us Jews, Cuba is just a part of a larger identity for us,” said Rodriguez. Three of his four grandparents came to Cuba from Turkey, and for him, “the Turkish heritage is as defining as the Cuban heritage.”

Most of those Cuban Jewish refugees settled in Miami, although their descendants now live around the country. The Cuban Jewish diaspora was affected by the Surfside condo collapse, which killed several members of the community.

“These have truly been weeks of an emotionally charged atmosphere,” said former Rep. Ileana Ros-Lehtinen (R-FL), who represented Miami for 30 years and who was born in Cuba. “The tragedy of the collapsed condo building in Surfside impacted many Latinos who are Jewish. That was a horrific low point. But they also experienced some high and positive emotions as the Cuban Jews saw the massive and powerful protests against the regime that has enslaved their native island nation for more than 60 years.”

Rep. María Elvira Salazar (R-FL), who now represents Ros-Lehtinen’s former district — with the largest Cuban Jewish population in the country — is the daughter of Cuban refugees. “The Cuban people have taken to the streets demanding one thing & one thing only: freedom,” Salazar told JI in a statement. “For 62 years, the Castro regime has systematically persecuted the people of Cuba and the United States must stand with them in their struggle for freedom.”

More than anywhere else in the country, Miami’s Jewish community is defined by its Latino — and Cuban in particular — population.

“When you leave South Florida, people can’t reconcile the fact that you might be Latin and Jewish,” said Berenson.

“They are the ones that are the most established Latin American Jewish community in Florida, in Miami,” said Dina Siegel Vann, director of the American Jewish Committee’s Arthur and Rochelle Belfer Institute for Latino and Latin American Affairs. “They’re very much part of Jewish institutional life, Miami being really the epicenter.”

Last week, AJC tweeted in support of the protests, writing, “We join [President Joe Biden] and leaders from across the world in calling for greater freedom and opportunity for the Cuban people after decades of authoritarian rule.”

On Wednesday, State Department spokesperson Ned Price said the Biden administration is considering sanctioning “Cuban officials responsible for violence, repression, human rights violations against those peaceful protesters.” The president also ordered a review of U.S. remittance policy to ensure money sent by Cuban Americans reaches family on the island and said he will consider increasing staff at the U.S. Embassy in Havana.

The protests are already resonating politically in the U.S., with many Republicans accusing Democrats of being soft on the issue and supporting socialism in Cuba. A statement from the Black Lives Matter Global Network Foundation seemed to make the argument for them.

“Black Lives Matter condemns the U.S. federal government’s inhumane treatment of Cubans,” the group said, blaming the decades-long U.S. embargo on trade with the country for Cuba’s poor conditions rather than the Cuban government’s actions. The statement was criticized by many Cuban Americans. Politico wrote that potential 2024 Republican presidential candidates have “seize[d] the chance to rail against socialism and court a constituency that helped deliver Florida to Trump last year.”

Still, Rodriguez — one of the most prominent Cuban American Democrats — pointed out that not all Cubans in the U.S. align with Republicans.

“There is definitely a spectrum of views,” Rodriguez argued. “I think there is the one that’s perceived as dominant throughout the country, but I think there’s a broader range than the way it’s perceived.”