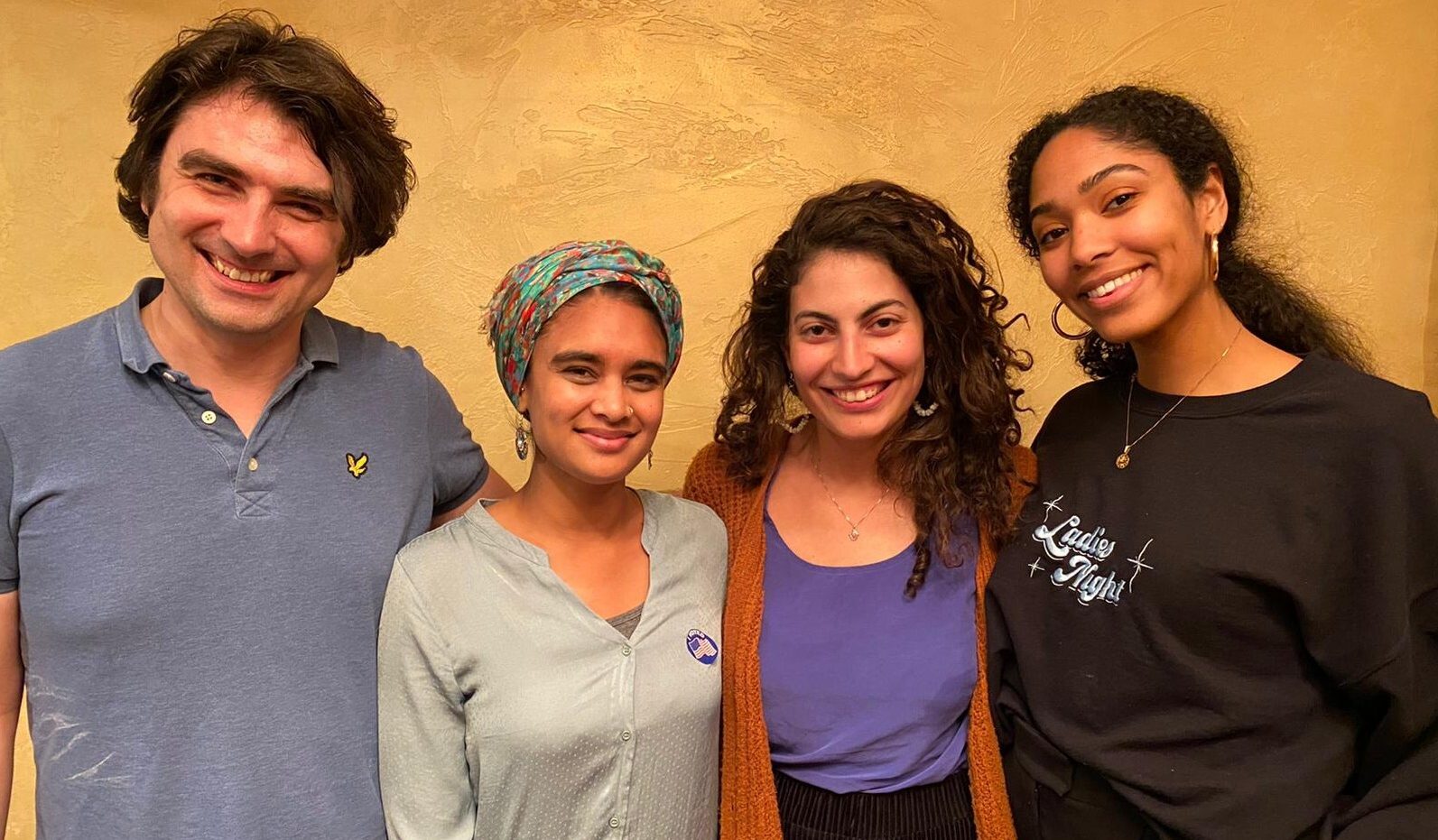 Building an interfaith oasis in the nation’s capital

This fall, Yemeni refugee Mohammed al Samawi will open his second Abrahamic House — home to one Jew, one Christian, one Muslim and one Baha’i

When the members of the inaugural class of Abrahamic Fellows — one Jew, one Muslim, one Christian and one Baha’i — moved into their shared home in Los Angeles last year, they were preparing for a unique year of interfaith programming, hard conversations and new friends. Instead, the coronavirus pandemic shut down their city.

The fellowship, the culmination of a decade of pioneering interfaith work by Yemeni refugee Mohammed al Samawi, is designed to bring together adherents of the four main “Abrahamic faiths” to promote dialogue and understanding.

“We had plans for them to do events inside the house, but they couldn’t do any events inside the house [because of the pandemic]. So basically, then they started doing it on Zoom,” al Samawi told Jewish Insider in a recent interview. “It was such an amazing experience…they became really good friends with each other.”

The idea for the Abrahamic House — of bringing together young people to form communities outside of traditional religious institutions — was inspired by a Jewish organization called Moishe House. In dozens of cities around the world, shared Moishe Houses offer affordable rent to young Jews, as long as they organize three to six social events and Jewish programs a month. When al Samawi, 34, first came to the U.S., he spoke about his interfaith work in Yemen at a Moishe House in Washington, D.C.

“I loved the whole idea about having people living together and doing Shabbat and doing Jewish events,” al Samawi recalled. “I thought, ‘Why don’t I do something similar to that?’ But instead of [people] only from one religion, it will be from different faiths.”

Al Samawi got in touch with David Cygielman, the founder and CEO of Moishe House. “The first time I met him, he came to stay with me and my family [in Charlotte, N.C.] for three days,” Cygielman told JI. “I just tried to share with him everything I could in terms of the model, what we learned.” Cygielman is now the chair of Abrahamic House’s board of directors.

Al Samawi argues that the Abrahamic House is doing something different from standard interfaith programming because its fellows form deep bonds over their year of living together. Members need not be religious as long as they are excited about the mission and willing to put in the work to host events.

“Abrahamic House is not a traditional interfaith organization. We don’t [just] celebrate holidays. We don’t just do basic conversations, we actually get into the deep conversation,” al Samawi noted. Events might focus on teaching attendees about antisemitism and Islamophobia, or teaching about how women in all four faiths are challenging traditional gender norms and taking on spiritual leadership roles.

Al Samawi is currently recruiting for the organization’s second class of residents, for a new Abrahamic House in Washington, D.C., where a religiously diverse group of millennials will host events — this time in person — in the nation’s capital. Applications are due at the end of June, with a move-in date of September 1.

The decision to create an Abrahamic House in Washington comes in part from al Samawi’s love for the area, where he lived after arriving in the U.S. “The reason why I chose Washington, D.C., is because you can find — almost everywhere — anyone from all the countries,” said al Samawi. “You can see the diversity in Washington, D.C., young professionals who really desire to do interfaith [work].”

The riot at the U.S. Capitol on January 6 further convinced him that Washington was the right choice for the next Abrahamic House. Al Samawi watched the events unfold with dread, feeling a startling sense of familiarity.

“It reminded me of what happens in Yemen. You see, in Yemen, the Houthis — they did the same thing in 2014,” al Samawi said, referring to the Houthi rebel militia that took over Yemen’s government in late 2014. “They entered the governmental buildings, and they start taking pictures while they are in the government buildings. They start saying, like, ‘We try to bring freedom and dignity to Yemen.’ As you can imagine, when I saw what happened in Washington, D.C., what kind of memories I’ve had.”

Al Samawi thinks that building understanding — the cornerstone of the Abrahamic House model — is a good place to start at this fractured moment in American history. “It started in my country like this. It started by a group who [has] all the stereotypes about the others, trying to impose their opinion in certain ways,” al Samawi noted. “We are speaking about a culture of ‘othering’ the others. Abrahamic House, this is what we’re trying to fight off: ‘othering’ the others. Because the more that you are involved in interfaith [efforts], the more that you realize, we are actually the same.”

Interfaith work is not just a pastime for al Samawi; it is his life’s work, and it almost killed him.  From a young age, he was taught by peers and teachers that Jews hate Muslims. Meeting a Christian teacher caused him to reconsider what he’d learned. Al Samawi gave the teacher a Quran, hoping to convert him to Islam. In response, the teacher gave al Samawi a copy of the Bible.

“I wanted to understand why Jews hate us. Again, that’s what I was really believing,” al Samawi said. He grew curious about Judaism after reading the Old Testament. “From my reading the Torah, I discovered it is so similar to the Quran in a lot of ways, the story of the Prophet, the teachings, almost a lot of things even identical to the Quran — the book of Muslims — but why didn’t they teach us that in school? They teach us the opposite.”

After connecting with several Jews on Facebook, al Samawi arranged to attend an interfaith conference in Bosnia-Herzegovina for Jews and Muslims, where he had his first in-person interaction with a Jewish person. He also learned that people can practice Islam in different ways; until attending this conference, he had never met a Muslim woman who did not wear a hijab. “It’s not only about the Jews,” al Samawi said. “It’s also about my own faith. It’s about the misinformation that I received.”

Still, it was too risky to tell his family why he was going to the conference; he had never traveled internationally by himself before due to a physical disability. “I had to trick them. I told them, ‘Well, I’m going to present Islam in this conference. If I go to the Muslim-Jewish conference, I might even change a Jew to be a Muslim,’” al Samawi explained.

After the conference, al Samawi began to speak publicly about interfaith work and building relationships with Jews and Christians. At home, where the Houthis were increasing their influence, he received death threats from extremists, including members of al-Qaeda.

“I asked my family and my friends and everyone that they know if they can help me [escape], but nobody was really able to until I asked people on Facebook,” al Samawi said. “Four Americans that I barely knew — they’re strangers — they helped me out, in 15 days, to escape, to cross the Red Sea actually on Passover. It’s like Moses, but in the wrong direction.” He arrived in the United States on May 31, 2015.

He arrived with just a backpack, not knowing that he’d be unlikely to return to Yemen. His first stop was Djibouti, in East Africa. After a month, he got a U.S. visa and permission to do a speaking tour. Once in the U.S., Al Samawi earned refugee status, and he is now trying to help his elderly parents make it to the country.

“They prefer to live in the small, tiny country, because at least that’s their country,” al Samawi noted. “They don’t want to leave it. They feel like if they leave it, then they actually give up for the extremists to take over.” He communicates with family members solely on WhatsApp, because their internet connection is not strong enough for calls, but even a weak internet connection can make it difficult to receive voice messages. “Sometimes I just record a voice message to my family and my heart is pumping fast because I only see one check on WhatsApp, which means it didn’t arrive yet. Are they fine? Are they okay? And then I feel guilty,” he admitted.

Al Samawi’s parents have grown to accept his interfaith work, and when his mother learned that it was Jews who helped him escape to America, she thanked them. “She said, ‘I would love to hug Daniel and kiss him, and I want to say thank you. Jews and Muslims, no different. We’re all the same,’” al Samawi recalled, referring to one of the Americans he met via Facebook who helped him escape Yemen.

Using his network of educators and leaders in the interfaith community, Al Samawi helps facilitate training for the members of the Abrahamic House, on basic tenets of interfaith dialogue as well as education around each faith, and topics including Islamophobia, antisemitism and Black Lives Matter. “The first month we will give them training, thinking mostly about how they can express their opinion, how they should listen to each other, how they can do events. But most importantly, we give them education,” al Samawi stated.

Al Samawi now lives in Los Angeles, where his memoir, The Fox Hunt, is being adapted into a film. The movie, which is being produced by Marc Platt and Steven Spielberg, was written by Josh Singer, who won an Academy Award for his screenplay for Spotlight.

It made sense for al Samawi to create the first Abrahamic House in L.A., his home base, although he did not live in it himself. In creating his nonprofit and recruiting fellows, he spoke with Moishe House’s Cygielman frequently. The pandemic impacted Moishe House as well, but most of the houses had already been up and running in their communities for several years, so their residents had a base of friends and supporters to whom they could market online events. Abrahamic House had no such network when the pandemic began.

“It’s been impressive to see how much they could do in the first year and the first time they did this under COVID restrictions,” said Cygielman. “It also makes it very challenging to have an unproven pilot program launch in conditions that are suboptimal. And I still think they did a wonderful job with it.”

The fellows who moved in were looking for a social life, which they struggled to cultivate. “We want them to be having their own life. Abrahamic House is not a job. It’s housing. We want them to do their full-time job, or when they can, go to the universities,” al Samawi explained. This became even more difficult when some of the fellows lost their jobs during the pandemic, and then had to focus on finding employment rather than planning interfaith events.

“COVID was really hard for us,” al Samawi said. Still, it had some benefits: Instead of promoting events only to people in Southern California, Abrahamic House could have a global reach. The fellows hosted some 30 online events, which reached over 900 people.

“We had people from Israel and Saudi Arabia in the same session,” al Samawi pointed out. “That’s something that we will not achieve if we did the event in person.”