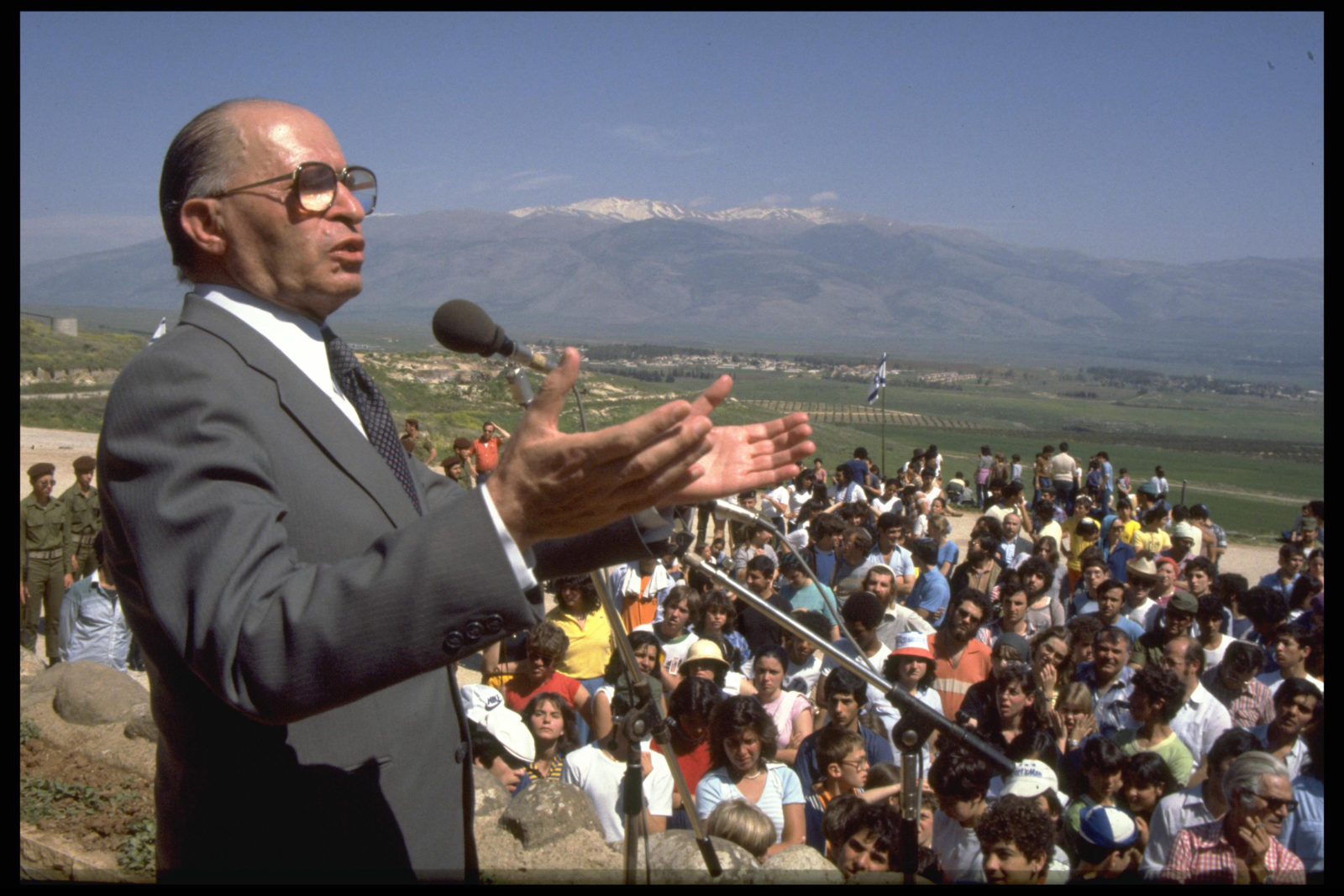 The life and legacy of Menachem Begin

A new film, ‘Upheaval,’ explores the leadership of the sixth prime minister of Israel — and how he shaped the modern state

On June 7, 1981, the Israeli Air Force — acting on the orders of Prime Minister Menachem Begin — carried out a surprise airstrike on the Osirak nuclear reactor in Iraq. The operation established what became known as the “Begin Doctrine,” the Israeli government’s policy of preemptive strikes against its enemies.

Forty years to the day after that fateful operation, Jonathan Gruber’s new documentary “Upheaval: The Journey of Menachem Begin,” which examines the legacy of the late prime minister, will hold its world premiere on Monday, followed by a virtual release.

“He was a complex person. He’s one of the most iconic figures in the 20th century. And I think that people can learn much more and understand the State of Israel more by watching this film and understanding it through his eyes,” Gruber, who wrote, directed and produced the film, told Jewish Insider in a recent interview.

Gruber, who previously wrote and directed 2012’s “Follow Me: The Yoni Netanyahu Story,” said he was approached to make this film by Rob Schwartz, the former chief of staff to former -Sen. Joe Lieberman (I-CT) — who also appears on-screen. After reading The Prime Ministers by Yehuda Avner, Schwartz was struck that there were no English-language documentaries about Begin, and set out to rectify the situation.

“I knew a little bit about him, about Begin, but I didn’t realize, really, his influence on the whole history of the State of Israel,” said Gruber. “His role as a leader really struck me.”

From his early life in Poland to his activity in the Irgun, his entry into politics, his time as prime minister and the groundbreaking peace deal Begin signed with Egyptian President Anwar Sadat, “Upheaval” guides viewers through the experiences that shaped the leader who, in turn, heavily shaped the State of Israel.

The film doesn’t shy away from some of the most controversial events in Begin’s life, including the 1982 Sabra and Shatilla massacre in Lebanon while he was prime minister, the 1948 Deir Yassin massacre while he was head of the Irgun, his role in the Altalena Affair, shortly after the founding of the state, and the deep rivalry with Israel’s first prime minister, David Ben-Gurion, which continued for the rest of their lives.

But Gruber — and many of the film’s interviewees — believe that Begin took responsibility for his actions in a way that few modern leaders do.

“The reason why I wanted to make this film was because I think Menachem Begin is a great model of leadership,” said Gruber. “And leadership means taking responsibility for your decisions, whether for good or for bad.”

Interspersed among the many original interviews, Gruber weaves in three English-language interviews with Begin: on the Christian Broadcasting Network’s 700 Club in 1982; a taped conversation with prominent Reform leader Rabbi Alexander Schindler; and an interview by Barbara Walters in 1977.

“Really he’s narrating his own life, in many ways,” said Gruber.

One piece of footage that wasn’t as easy to come by appears at the end of the film, depicting Begin shortly before his death — eight years after he resigned from office and largely disappeared from public life.

Surrounded by medical personnel and leaning heavily on a walker, Begin is asked by reporters “why haven’t you left your house for all these years?” All Begin would reply was: “personal reasons.”

Gruber said the Israeli researchers on the film combed through the archives to find the short clip, which he called “quick but tremendously poignant.”

The prime minister’s 1983 resignation is largely attributed to not just his feelings of failure over the Lebanon War fallout, but also his deep depression over the death of his beloved wife, Aliza, less than a year earlier.

That aspect of his life is something Gruber knew little about before embarking on this film project.

“Upheaval” was produced without the cooperation of any of Begin’s descendants, though it includes interviews with a handful of friends and acquaintances. Gruber said Begin’s family members “are very private people” and chose not to participate in the film. Bennie Begin, Menachem’s son and a former Israeli minister and longtime politician, politely declined, said Gruber.

The junior Begin was a longtime member of Likud, the party his father founded, who defected from the party earlier this year and joined the New Hope faction led by Gideon Sa’ar — leveling harsh criticism at Prime Minister Benjamin Netanyahu on his way out.

“He’s his father’s son, so I’m sure he’s influenced tremendously by his father who he clearly loved and admired,” said Gruber of Begin’s views on the current Israeli leader. And the attempts by many political parties of late to claim his legacy, shows that “Begin looms large even today almost 30 years after his death.”

The so-called Begin Doctrine, which has guided Israel’s decision making in taking preventative action against enemy states, can be traced back to the prime minister’s early life in Poland and his experiences in the Holocaust — where his entire family was wiped out by the Nazis.

“I certainly did not know that he spent time in the gulag, that he was on the run, his World War II experiences were all new to me, but really enlightening, because it shaped his whole life,” said Gruber. “Everything was filtered through the Holocaust, through that experience of losing his family and being on the run. And so he said, ‘Listen, if people are going to say that they want to do harm to Jews, they’re going to do harm to Jews — believe them.’”

Gruber said he worked to make the film balanced, and not “hagiographic.” But the movie — which was co-produced by World Jewish Congress President Ron Lauder as well as several figures associated with the controversial Clarion Project — is largely laudatory of Begin and his legacy, even when discussing his failures.

“We were trying really hard to get as many diverse voices as we could,” said the director. “We tried to get interviews from Arabs or Palestinians, and it was unfortunate because only one — Ghaith al-Omari [of The Washington Institute] — agreed to be part of the film. But I really wanted those voices.”

Gruber said he spoke with an Egyptian academic who “pulled out after we did the interview,” and a Palestinian woman who canceled before they had a chance to film.

“Wanting to get these other people’s voices was such a challenge, but I do think that had they done the interviews they would have said similar things” as the other figures in the film, the filmmaker said. “Certainly we’re not kind to Menachem Begin for the Lebanon War or Sabra and Shatilla, I think we were pretty fact-based when it comes to Deir Yassin and the expansion of the settlements.”

“Overall, it is a positive view of Begin,” he added, “but I think it’s complex and nuanced.”