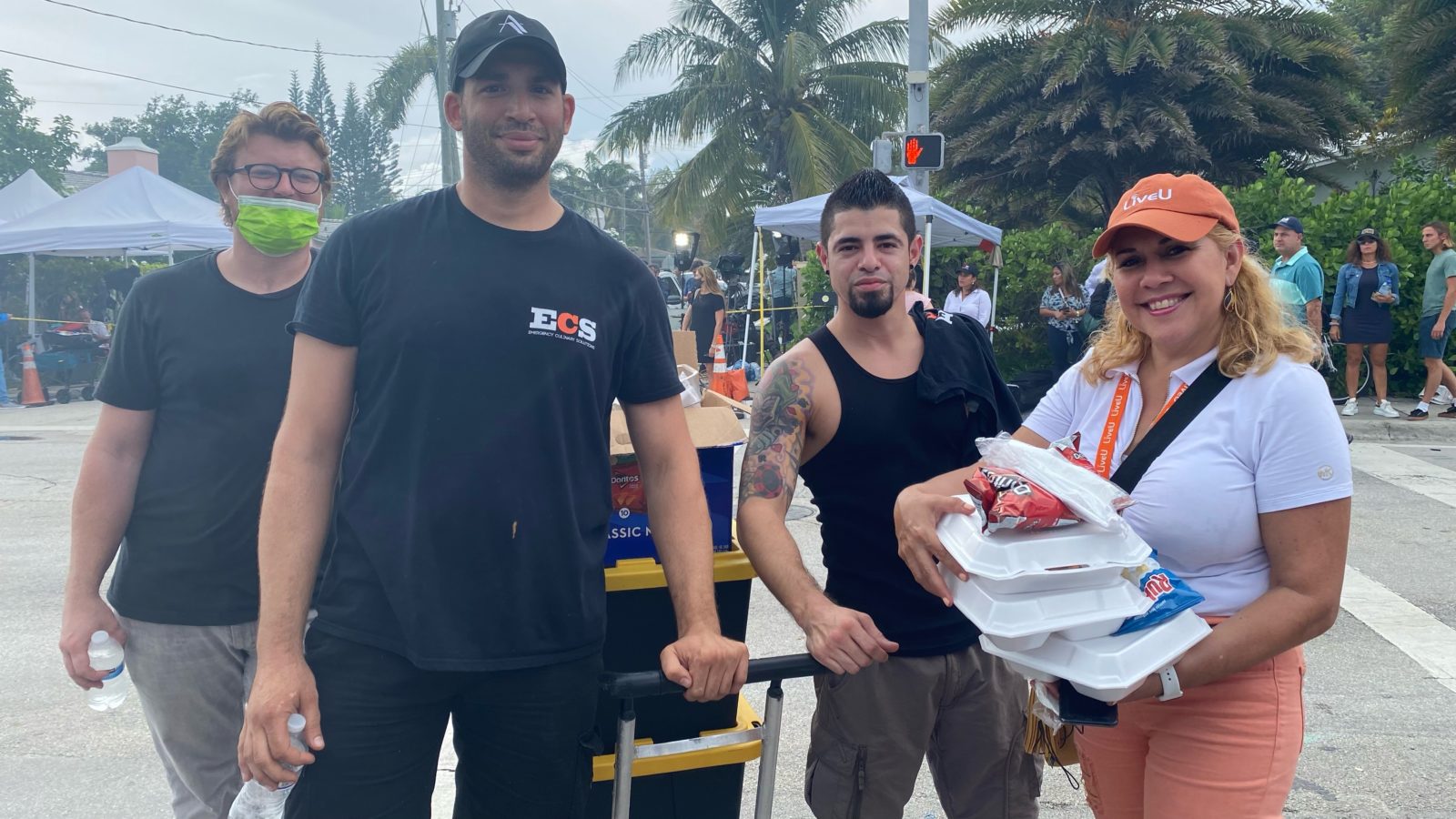 Daniel Arshadnia is used to working at disaster zones. They aren’t usually in his backyard.

The night the Champlain Towers South condo collapsed last week, Daniel Arshadnia was staying with a friend in Surfside, across the street from the disaster. The next morning, he was at the scene.

Arshadnia isn’t technically a first responder, but as a chef whose business involves going to disaster zones — “chasing storms,” as Arshadnia puts it, since he usually travels to places hit by hurricanes — he is often one of the first people at the scene of a crisis, setting up a grill or a smoker to feed the survivors of the latest tragedy.

“I called all my guys up first thing in the morning, and I said, ‘Everyone, this is a volunteer opportunity. We’re not making any money doing this,’” Arshadnia told Jewish Insider.

When he arrives on site in the aftermath of a natural disaster, he feeds survivors and first responders for free, while setting up contracts to feed the employees of the clean-up companies handling the destruction. His work has taken him to Tennessee, Louisiana and Northern Florida, but this is his first time working a disaster so close to home.

“Everybody was there on one site working for the same goal, so it’s nice to see that,” said Arshadnia. “It sucks that it happens in my own backyard.” He lives nearby in North Miami Beach, another small municipality in the patchwork of communities that make up Miami-Dade County.

The response reminded him of the aftermath of the Sept. 11 terrorist attacks, he said. Arshadnia was a teenager at the time, and living outside of New York City. “Everybody was at one location and all the world’s resources were there, and I almost feel like the same thing happened now,” said Arshadnia. “Everybody came together — by 8:30 in the morning, you had ambulances lined up down the street, almost like Ubers at an NFL game waiting to pick people up and take them home.”

In his work in Surfside, he has been feeding mostly first responders, not the family members of victims. “I haven’t met anybody yet that was affected by this,” said Arshadnia. But he called a friend of his over the weekend whose brother lived in Surfside.

“She said her brother actually lived in the building. Lucky for him, he was in Israel getting engaged,” Arshadnia recalled. “His fiance asked him to stay for two weeks. That two weeks saved his life.”

He and his team have been adapting as they go, picking a menu on the fly and trying to increase their daily output. “We pumped out on the first day, I think, close to 100 sandwiches, with Cajun turkey wraps for all the police officers on the perimeter,” Arshadnia said. “And then the second day we made homestyle roasted chicken and fried rice with coleslaw for all the police officers in the morning shift and the night shift. And we increased our capacity.”

Arshadnia is always on the move — both a night owl and a morning person, someone who can’t spend too long in one place. Three days after graduating from the Culinary Institute of America, he joined the military. “I just needed some kind of structure in my life, and [the military] provided it for me,” he explained. He served as a food service specialist and joined the Army Reserve Culinary Arts Team, which competes against teams from other branches of the U.S. military.

He intends to continue working in Surfside for at least two weeks. “I’m committed until the last person has gone. Well, until there’s a storm,” he explained. He is currently in his “off season,” before late summer, when hurricanes usually pick up.

When not sleeping in his truck in the parking lot of a rural Walmart on the way to an area impacted by a hurricane, Arshadnia works as a private chef in South Florida. That has helped him this week, as he and his employees are working as unpaid volunteers on the scene. His family and friends have chipped in to help cover costs, but Arshadnia has also been able to call on some of his private clients.

“Everything has been done for free, and if I have to raise money from the public, I just reach out to a few clients and say, ‘See what I’m doing — you guys want to fund it? Yes or no?’ I’m lucky to have really cool people around me,” said Arshadnia.

Working in Surfside, a heavily Jewish town where 40 Jews are known to be among the dead and missing, Arshadnia has shown his employees his Jewish side.

“It brings me a lot of joy for my people that work with me to see it, because it kind of defines some of the qualities that I think that I have in myself, but they just don’t get,” Arshadnia said. “Like, ‘Why do you have to be so nice all the time? Why do you have to be so helpful?’ Because [these are] the things that are instilled upon us. When things happen, you stay together, you work together, you support your law enforcement, you support your local officials.”

He told JI that one of his employees commented to him recently that it was strange that so many volunteers seemed happy and friendly, even when working in the shadow of tragedy. In response, Arshadnia turned to Judaism: “Why should anybody be upset? They’re all here to help. It’s a mitzvah,” he told his colleague.