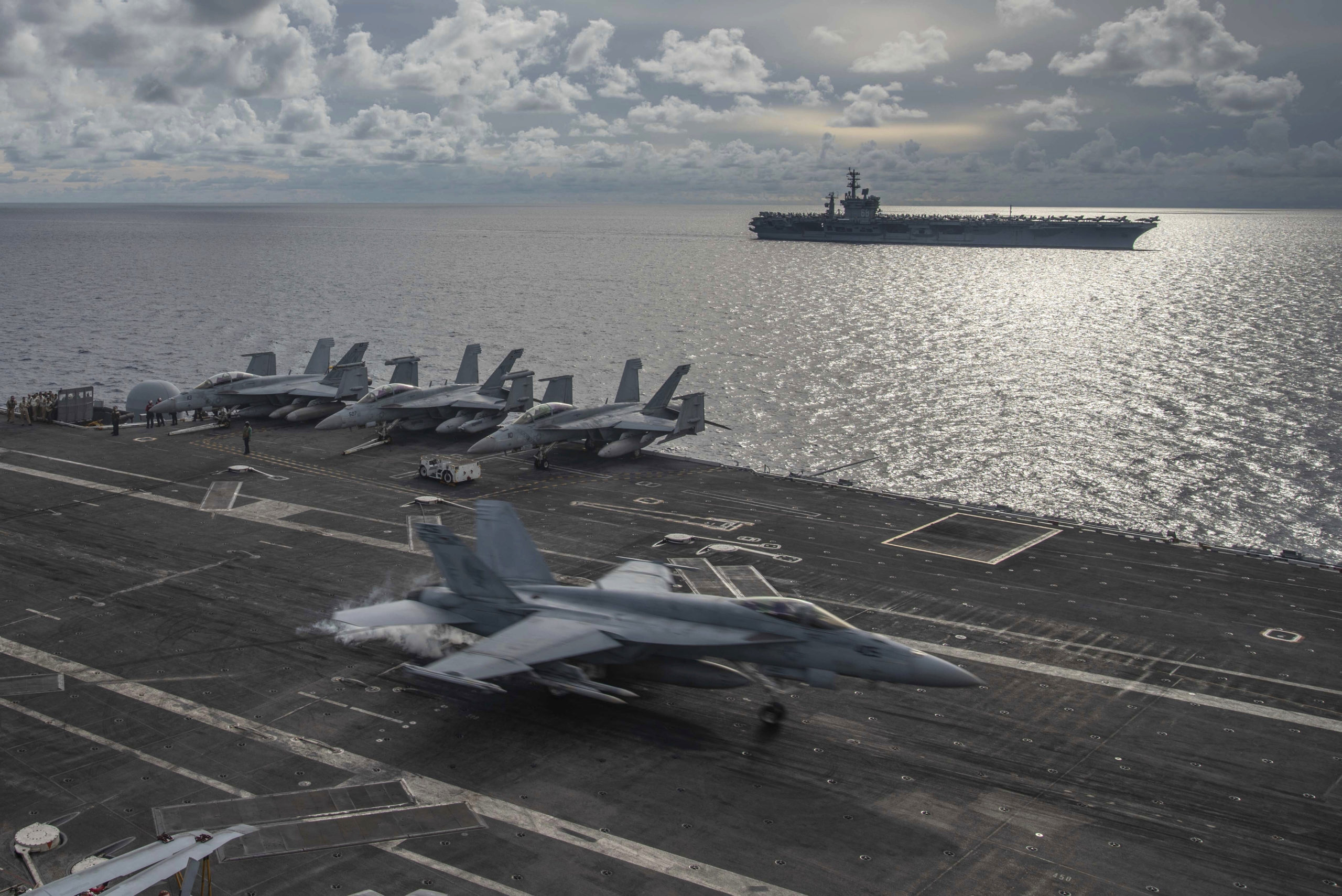 ‘Imagining is a deterrent’: Why two military vets wrote a novel imagining a deadly world war

Inside '2034,' Elliot Ackerman and James Stavridis' war thriller that comes with a warning for world leaders

Picture a world with a belligerent Iran, China on the rise, chaos-seeking Russians and waning global influence for the United States — in other words, 2021.

Then imagine that the simmering tensions between the U.S. and each of these nations boil over, leading to a full-fledged world war. It’s a horrifying outcome feared by military leaders and policymakers — not to mention American civilians. It’s also the plot of 2034: A Novel of the Next World War, a new book from Adm. James Stavridis and Marine Corps veteran Elliot Ackerman that explores what a future world war might look like, so foreign policy and military practitioners can make sure it never happens.

In 2034, a series of small but significant tactical mistakes lands the U.S. in a war with China. The opening chapter features a U.S. destroyer sunk in the South China Sea and an American pilot captured after veering off course into Iranian airspace. But the novel is neither a patriotic tribute to American exceptionalism nor a political salvo criticizing military might. Instead, it aims to get at “how quickly you can find yourself trapped into an escalatory paradigm where no one can get out of the escalation,” Ackerman told Jewish Insider in a recent interview. Put more clearly: 2034 is about “how we could sleepwalk to war,” he explained. The novel’s villain, Ackerman explains, is “war itself.”

Despite the topic — and its explicit lessons for military leaders and national security officials — the book is intended to reach a broad audience. “The book speculates [about] a very horrible war, but I think it’s a fun book to read,” Ackerman said. “I’m writing about war in order to write also about other things, and get at larger subjects.”

The book’s co-authors share a history of military service. But within the military, there was little overlap: “If my rank was at the treetops, [Stavridis is] sitting up in the stratosphere. I mean, he outranks me by a gazillion,” Ackerman told JI. Ackerman served five tours of duty in Iraq and Afghanistan as a Marine, while Stavridis retired from a 37-year military career as a four-star U.S. naval officer, at one point overseeing U.S. Southern Command. After spending four years as NATO’s Supreme Allied Commander Europe, Stavridis became dean of Tufts University’s Fletcher School of Law and Diplomacy, where he met Ackerman.

When Ackerman returned to the Fletcher School as writer-in-residence after earning his master’s degree there, he told JI that the official description of his position stated that he would have to “talk to the dean about books when he feels like it,” leading to a friendship with Stavridis predicated on a shared love of books that the two often discussed in Stavridis’s office. Years later, Stavridis — who had not previously written fiction — approached his editor with the idea for a novel imagining a war between the U.S. and China. Ackerman shared the same editor, who then approached him about joining Stavridis as a collaborator.

When the pair sat down to write the book, they focused on several “tranches,” as Ackerman explained: “Cyber, China, the role that Iran could play, the role that Russia could play, and how we could sleepwalk to war,” he said. What they wanted to show most of all was that “imagination is a national security imperative,” Ackerman noted.

“The great three national security catastrophes that have hit the United States in the last 100-odd years,” Ackerman argues, were Pearl Harbor, the 9/11 terrorist attacks and the coronavirus pandemic. And all three catastrophes were, he claimed, “failures of imagination” that might have been prevented — or at least mediated — had decision-makers better considered the threats in advance.

Take, for instance, the 9/11 Commission Report — its conclusion was that “the institutions charged with protecting our borders, civil aviation, and national security did not understand how grave this threat could be.” Two years before the coronavirus reached the U.S., a 2018 exercise hosted by Johns Hopkins University allowed government officials to consider how they would respond to a highly contagious virus transmitted by coughing.

In 2034, the U.S. and China are at war in a world that resembles 2021, but with notable differences. Iran moved toward an alliance with China after signing on to China’s global “Belt and Road” initiative to stave off financial ruin after the pandemic. In one passage, an offhand reference reveals that the Iranian Revolutionary Guard Corps helped Syria retake the Golan Heights from Israel in 2030. Inexplicably, this move did not spark broader conflict.

“More than anything,” Ackerman explained, he and Stavridis inserted the Golan Heights plot point to relate “the idea that things have not remained how they’ve been for the past several decades, and that there is a sense of realignment in the region — that the Iranians are very much continuing to act aggressively.” The pair decided not to “write a book that had everything in the kitchen sink in it,” opting instead to write “something that was concise, that a reader wasn’t going to get lost in appendices of who each character was.” There was simply, Ackerman argued, not a way to address every single country or national security issue while also making the book enjoyable.

In the world depicted in 2034, the “forever wars” in Iraq and Afghanistan seem to have ended, although they are never explicitly addressed. But part of the legacy of Afghanistan and Iraq in 2034 is that those wars helped jump-start the era of American decline that touched off the book’s central U.S.-China conflict. In Ackerman’s view, Iraq and Afghanistan came at the start of the 21st century, following an “American Century” in which U.S. involvement ended two world wars. But “perpetual warfare, historically speaking, is sort of late-empire behavior,” he said, suggesting that the duration of those wars contributed to the U.S.’s dwindling global influence.

At the outset of the Biden administration, Western leaders heralded the new presidency as a sign that the United States would again be a leader in global alliances. It’s “great to see America reengage” on the global stage, Canadian Prime Minister Justin Trudeau said in a recent interview. In his confirmation hearing to be Biden’s secretary of state, Tony Blinken said that one of his key goals is to “revitalize our core alliances.”

But 2034 paints a different picture, with Ackerman warning that even a well-intentioned presidential administration can’t just return to the dominant position occupied by the U.S. throughout the “American Century.” Four or eight years later, a new president will take over, and will install new diplomats and bureaucrats. “One of the challenges America faces is an inability to really act in the strategic long-term the way the Chinese can because we go from administration to administration,” Ackerman said. In this era of increasing polarization, partisanship presents a national security threat: “With our politics as fractious as they are,” Ackerman said, it’s challenging for the U.S. “to behave in ways that are strategically coherent.”

By guiding readers through the experiences of a multinational set of characters, 2034 demonstrates that no rational decision-maker chooses war, and certainly not at the scale of the one depicted in the novel. But as the book aims to illuminate, war is never a simple binary: Do we or don’t we? It can come after an unpredictable turn of events, leading to an outcome that no one thought possible just days earlier.

Ackerman points to World War I as a reference point: In the summer of 1914, “nobody thought that Europe would go to war with itself, based off of the interconnectedness of all of the royal families,” he noted. But it happened anyway, leading to four years of bloodshed that devastated Europe. The same thinking now undergirds American policy vis-a-vis China, he said.

“We’re so interconnected economically with China, it would be in nobody’s best interests” to go to war, he explained. Still, “war in and of itself is an emotional decision, not a rational one. One needs to take into account how quickly a series of unfortunate events could lead to countries to want to engage in the type of war we’ve imagined.”