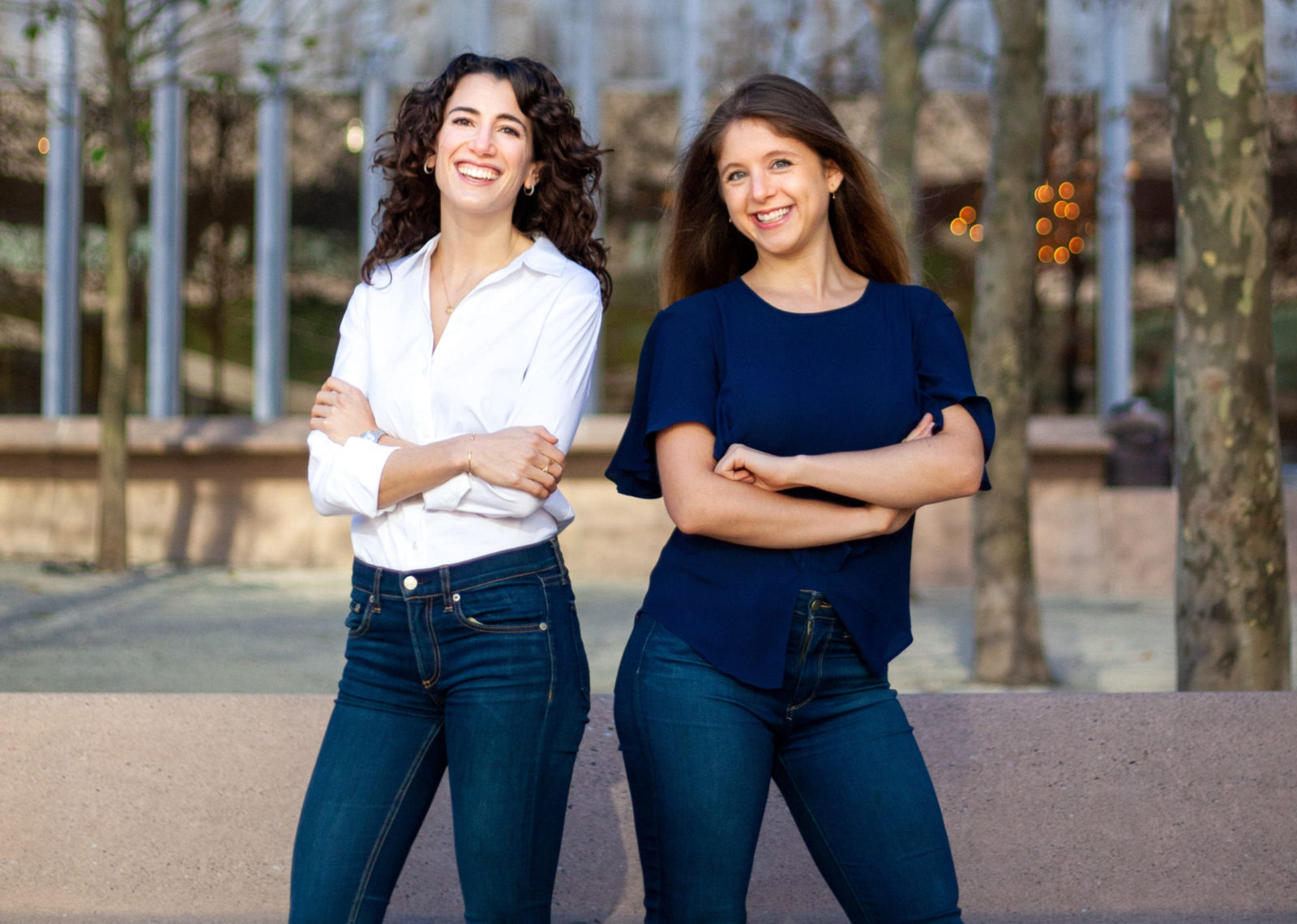 The women behind Avid Ventures, the VC fund looking for the next Israeli ‘unicorn’

Addie Lerner and Tali Vogelstein raised $72 million in their first round of funding, one of the largest sums for a first-time fund — woman-led or otherwise

In February, Avid Ventures officially launched after bringing in a haul of $72 million. To the fund’s founders, that number meant more than just an attention-grabbing sum they could use to launch their new venture capital fund.

“We love that it’s four times chai,” said Addie Lerner, the firm’s founder and managing partner, referring to the number 18, associated with the Hebrew word chai, which means “life.” The number’s significance extends beyond Judaism: “$72 million is actually one of the largest [amounts to be raised by a] first-time fund, especially by female leaders,” Lerner explained.

Founding investors Lerner, 31, and Tali Vogelstein, 25, make up Avid’s two-person team. As a new fund, Avid is looking for a way to gain a strategic advantage in a crowded field of VC firms. And when investing in companies’ early Series A and Series B rounds, venture firms get competitive: “It leads to a lot of sharp elbows, and it leads to investors trying to get what’s best for their firm, and not necessarily what’s best for the founder and their company,” Lerner told Jewish Insider. Her goal is for Avid to become indispensable to company founders.

Avid’s proposition is simple: “Let’s write smaller checks into these large rounds, where we’re going to be disproportionately helpful,” said Lerner. In other words: Don’t try to compete with the bigger firms investing several million dollars, but rather make a smaller investment between $500,000 and $1 million, while cultivating an advisory role as “a strategic finance advisor or strategic outsourced chief financial officer.” Avid wants startup founders to learn to rely on Lerner and Vogelstein after the Series A round, and then they’ll come back and write a much larger check in Series B, the next round of funding.

Both women grew up involved in their local Jewish communities: Newton, Mass., for Lerner, and Baltimore for Vogelstein, though both now live in New York.

“I grew up in a Reform Jewish family, where Israel was actually always part of the conversation,” Lerner recalled. As an undergraduate at Princeton, she studied Middle East policy and Arabic. “I thought I was going to go work at the State Department and solve Middle East peace, and then quickly got disillusioned with that career path. So I did a full 180 and I went to go work at Goldman Sachs after school.” She then worked at the investment firm General Atlantic and the venture firm General Catalyst, before deciding to start a firm of her own.

For a year, Avid was Lerner’s one-woman show, and she brought in the firm’s anchor investors before the COVID-19 pandemic began. Vogelstein, who graduated from the Wharton School of Business at the University of Pennsylvania and then worked at Bessemer Venture Partners, joined Avid in August after a mutual friend put her in touch with Lerner. “I was just so impressed with [Lerner] and her strategy and vision for Avid, and I loved the thesis that she was building Avid around, which is that investing in a founder startup is really a privilege that should be earned,” Vogelstein said.

A connection to Israel is a key part of both partners’ identities, and Israel will be one of several countries in which they plan to invest. Vogelstein spent a year there before college, and Lerner has been to Israel on more than a dozen business trips.

“Israel has a very near and dear place in both of our hearts, and we also think we can get some really incredible returns by investing in Israeli companies,” said Vogelstein. She added that she  spent a summer interning in Israel through the program Birthright Excel, which she believes has contributed to Israel’s startup culture — as has the Israeli Defense Forces: “We think the IDF certainly contributes to the mindset where founders are not afraid of failure.”

Vogelstein noted that some investors worry that Israeli companies don’t have the capacity to become a “unicorn,” a rare company that achieves a $1 billion valuation, due to the limited size of the Israeli market. But this isn’t a concern for Avid, which looks for Israeli companies that have a global focus. “More and more, Israeli companies are built either entirely in Israel, but more frequently, internationally, like Rapyd,” Lerner added, referring to an alternative payments company in which Avid has invested. Rapyd, which was recently valued at $2.5 billion, was founded in Tel Aviv but now has offices in San Francisco, Singapore and London.

As Jewish investors with an interest in Israel, Lerner and Vogelstein say people often make the assumption that Israel is their only focus. “Folks have had a bit of a misconception, like, ‘Oh, so you’re investing only in Israeli companies?’ No, we’re two Jewish women who have done a lot in Israel, and we hopefully will invest in someone in Israel, but it’s not all we do,” Lerner explained.

Still, even in the U.S., the Jewish community has been central to the firm’s launch. One of Avid’s anchor investors is Schusterman Family Investments, tied to philanthropist Lynn Schusterman. “They’ve been just really fabulous partners to work with,” Lerner said, but noted that she couldn’t say much more because the Schusterman family, which is more widely known for its philanthropic giving than its investment arm, does not “disclose a lot about their investment activities.”

Avid has already made a number of early investments in startups — mostly in the fintech, or financial technology, sector — including Alloy, an identity management platform for financial institutions; Nova Credit, which is building a global credit bureau; and the women’s co-working space The Wing.

“We actually built Avid out of The Wing,” Lerner said, although the COVID-19 pandemic shuttered The Wing’s office spaces. The investment was centered around a digital platform The Wing was building out, to connect members around the world for mentorship opportunities and online events. The pandemic, as well as internal controversies, led to the co-working company taking a major financial hit. Although Lerner and Vogelstein celebrate the firm’s identity as woman-led, they aren’t interested in exclusively backing woman-led companies — The Wing  was just one piece of their portfolio.

Still, Lerner and Vogelstein have heard from people who assume that, as women, they invest only in women. “We’re a woman-led firm that is investing in really awesome founders and companies, and the fact that we’re woman-led is cool but unrelated,” she explained. “Occasionally, we’ll get in front of someone, and they’ll be like, ‘Oh, so you only invest in women, right?’ No, we are women, we don’t only invest in women.”

Some of the early news coverage Avid received in tech and finance publications centered on the extreme rarity of a woman-only venture firm. “As of 2019, the majority of venture firms — 65% — still did not have a single female partner or [general partner] at their firm, according to All Raise. So naturally, anytime we hear of a new female-led fund, our ears perk up,” TechCrunch wrote last month in an article about Avid. (All Raise is a nonprofit that seeks to help women succeed in VC; Lerner has been active in the organization’s New York chapter.)

“I’m pretty used to being the only woman in the room,” Lerner told JI. She was the only woman on her teams at both Goldman Sachs and General Atlantic, but she believes those companies want to improve: “Diversity continues to be a big focus for those firms, and I’m glad to see diversity — and not just gender diversity, but diversity of all kinds — really evolve at those firms,” Lerner said. She added that in the early-stage venture capital world, she is seeing more women than she used to.

Diversity, broadly defined, is a value that Avid considers when making investments, and it’s something that the firm touts in its marketing. “We are really proud that 40% of the 50 individual [limited partners] who invested in Avid are women,” Lerner said, and having women involved at all stages of the investment process “creates a virtuous cycle.” But ultimately, the firm invests in companies it views as promising, independent of who runs them: “Our strong belief,” Lerner explained, “is that this can and should happen in a more organic way, versus any sort of intentional focus or quotas.”