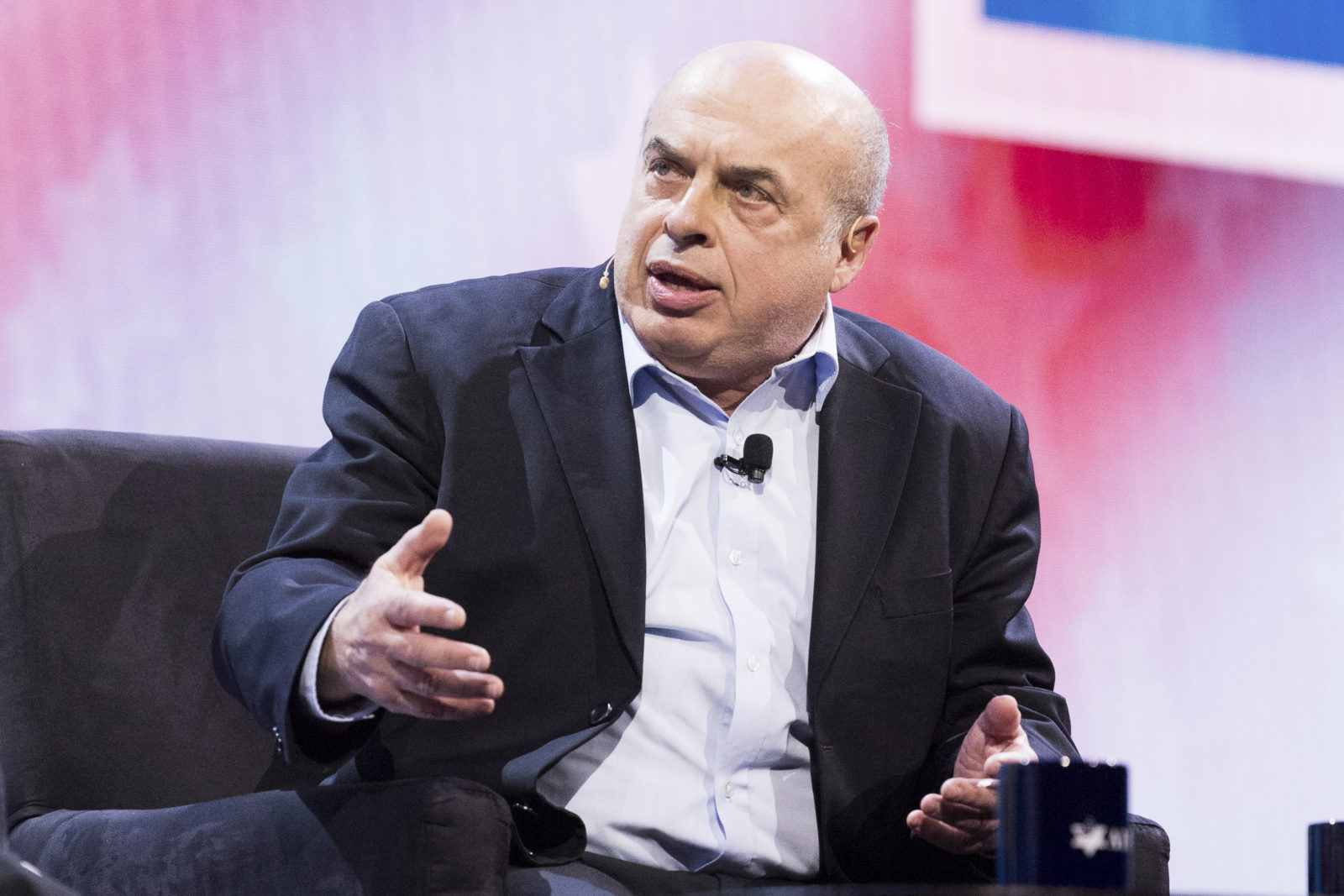 Natan Sharansky is not ready to write a memoir. The 72-year-old activist, politician and former Jewish Agency chairman believes he is much too young for such an endeavor.

After all, he writes in the introduction to his latest book — Never Alone: Prison, Politics, and My People, which hits shelves today — he only celebrated his bar mitzvah seven years ago.

Instead, says Sharansky, his new book, written in conjunction with historian Gil Troy, is an exploration of the relationship between Israel and the Jewish people from the multiple perspectives he has held during his remarkable life.

“This is a book about the dialogue between Israel and the Jewish people,” Sharansky told Jewish Insider in a recent phone interview from Jerusalem, “which is a very important point of debate and discussion — are we diverging or are we converging?” And Sharansky believes he has a “very unique perspective” on that relationship.

“I watched and participated in this dialogue from three different directions — from prison, from a government position, and as the head of the Jewish Agency,” he said. “It’s three different dimensions which together can give the full picture.” Along the way, he added, “I am speaking about my personal experience — so people could see it as a memoir. But that’s my warning from the beginning: It’s not a memoir.”

For lovers of symmetry — Sharansky among them — his incredible life journey has a satisfying rhythm. He spent nine years in a Soviet Gulag as a ‘prisoner of Zion,’ nine years in politics as a Knesset member and minister, and nine years as chairman of the Jewish Agency.

Those chapters in his life are reflected in the chronology of the book, which charts his evolving perspective on the global Jewish community. And they enable him to make one of his favorite jokes, “that having served for nine years in each, I didn’t know where I suffered most.”

Sharansky’s famous wit is present throughout Never Alone, as is his no-holds-barred approach to all topics. He is blunt and honest in assessing both his own shortcomings and those of the people around him. He notes that when he entered politics, he realized that he had to do what other politicians do, and “make far-ranging governmental decisions on endlessly complicated issues far beyond your knowledge base.”

In the book, he slams Prime Minister Benjamin Netanyahu for “succumbing to ultra-Orthodox blackmail” on the Kotel deal and attributed Netanyahu’s political success to “demonizing his opponents.” Sharansky classified Prime Minister Ariel Sharon’s behavior in Sabra and Shatilla as “a moral failure,” wrote that Prime Minister Yitzhak Rabin bought into the “delusion” that Yasser Arafat could be a partner for peace, and referred to Prime Minister Shimon Peres’s 1993 book as “embarrassingly childlike.”

But while he pulls no punches, Sharansky is at his core an optimist, and one who holds an undying belief in the power of the Jewish community. He hopes this book can prove that the worldwide Jewish community is not as divided and fractured as it may seem. It is easy, he says, to look at the global Jewish movement to free Soviet Jewry as the peak of Jewish unity, and today’s infighting and conflicts as a low point. But the truth, he posits, is more complex.

“It’s quite an illusion to think that then it was all unity and now it is all division,” he told JI. In the book, he details the deep disharmony among not just Soviet Jewish dissidents — some who tied the movement directly to Zionism, and others who sought to freely practice Judaism in Russia — but also the Jewish groups working to save them, some of which opposed allowing Russian Jews to emigrate to the United States instead of Israel.

The movement “was full of contradictions and competing Jewish and Israeli organizations who didn’t trust one another, who sometimes even hated one another, who were coming from very different positions,” Sharansky told JI. “But in the end we all had one aim, and we were united — at least that’s what it looked like to the KGB: one monolithic movement.”

It is easy today, he said, to get bogged down in the differences and deep fissions between Israeli and American Jews.

“Both sides sometimes feel deeply betrayed by the other side,” he said. “But at the same time, everybody wants to be part of the Jewish family. To continue this journey together. And we have to build on this.”

Sharansky writes in great detail about the heated and fractious debates he was involved with while in the Israeli government over conversion and over making the Western Wall more accessible to liberal Jewish groups — both issues that remain unsolved today.

“I’m not surprised” that these issues haven’t been resolved 30 years later, Sharansky said, noting that they date back to Prime Minister David Ben-Gurion, who granted status quo control over religious issues to ultra-Orthodox groups. But he believes “it was almost, I would say, anti-Zionist that we didn’t create space” for more liberal approaches to Judaism.

Never Alone may not be a memoir per se, but it is chock full of juicy personal and political anecdotes and tidbits spread out over more than 400 pages. Sharansky noted that he began wearing his now-iconic military-style cap to stop media speculation over if he would don a kippa once he moved to Israel, after his wife, Avital, became religious while he was in prison. He reveals that in 2015, in a discussion with Netanyahu over French aliya, the prime minister floated the idea of working to convince Canada and Australia not to accept French Jews in an effort to force them to come to Israel.

And Sharansky recounted that when he traveled to U.S. President Ronald Reagan’s funeral in 2004 — to pay his respects to the man who helped pressure Soviet leader Mikhail Gorbachev to release him — it was against the explicit orders of then-Prime Minister Ariel Sharon. Sharon, it turns out, “never forgave Reagan” for his angry reaction to the 1982 Israeli invasion of Lebanon, when Sharon was defense minister, “and saw no reason to honor him.”

Sharansky also divulged that during one discussion over the Western Wall deal, Netanyahu, “harking back to his days as an MIT architecture student,” proposed a “flying staircase suspended over the Robinson’s Arch pit” for better access to the egalitarian area of the Kotel — an idea not well received by haredi politicians.

In the book, Sharansky has no love lost for either President Barack Obama — who “prioritized engaging with dictatorial regimes” — or President Donald Trump, whose “human rights-free foreign policy” continues to reach “absurd new depths.”

But he thinks such political polarization — heavily reflected in the gaps between Israeli and American Jewry — has roots that far predate either president.

“The polarization is between those who believe that we should strengthen democracy, that we should play down national identity and those that believe we have to restore our identity even if it means that we will have less democracy,” Sharansky told JI. “This polarization creates tension between Israel, whose first priority is to protect our Jewish identity, and the American liberal Jewish community, whose first priority is to make sure that America will be a liberal society where Jews and minorities will feel comfortable.”

What he tries to show in the book, Sharansky said, “is the fact that you have different sets of priorities for our own survival [based on] where we chose to live, doesn’t have to make us hostile to one another.”

And while Trump is an “extremely controversial and polarizing personality,” he said, he hopes that won’t cause further gaps between Israeli and American Jews.

“The problems begin when the hatred of Trump stops American Jews from recognizing things like moving the [U.S.] Embassy to Jerusalem,” he said. “Also we can’t allow our feelings of gratitude to Trump to make us stop criticizing him when he does things” deserving of censure.

It has been almost 14 years since Sharansky left the Knesset, but he is still finely attuned to the political landscape. And he’s not happy about what he sees.

Like most Israelis, Sharansky has spent the past six months grounded within the country, canceling air travel and learning how to use Zoom — both to connect with his grandchildren and with Jews all over the world. In March he released a humorous video offering quarantine tips based on his nine years in prison — half of which was spent in solitary confinement.

“I found ways to enjoy time in prison and I still try to enjoy corona as much as I enjoyed prison,” he joked to JI, comparing being parted from his grandchildren to “torture.” And while Sharansky said he’d never heard of Zoom until this year, the power it has shown in bringing disparate Jewish communities together has provided him with an extra boost of optimism.

“I have a feeling that this feeling of connectedness, that we are one family, that we have to cooperate closely to continue our journey together — is strengthening.”