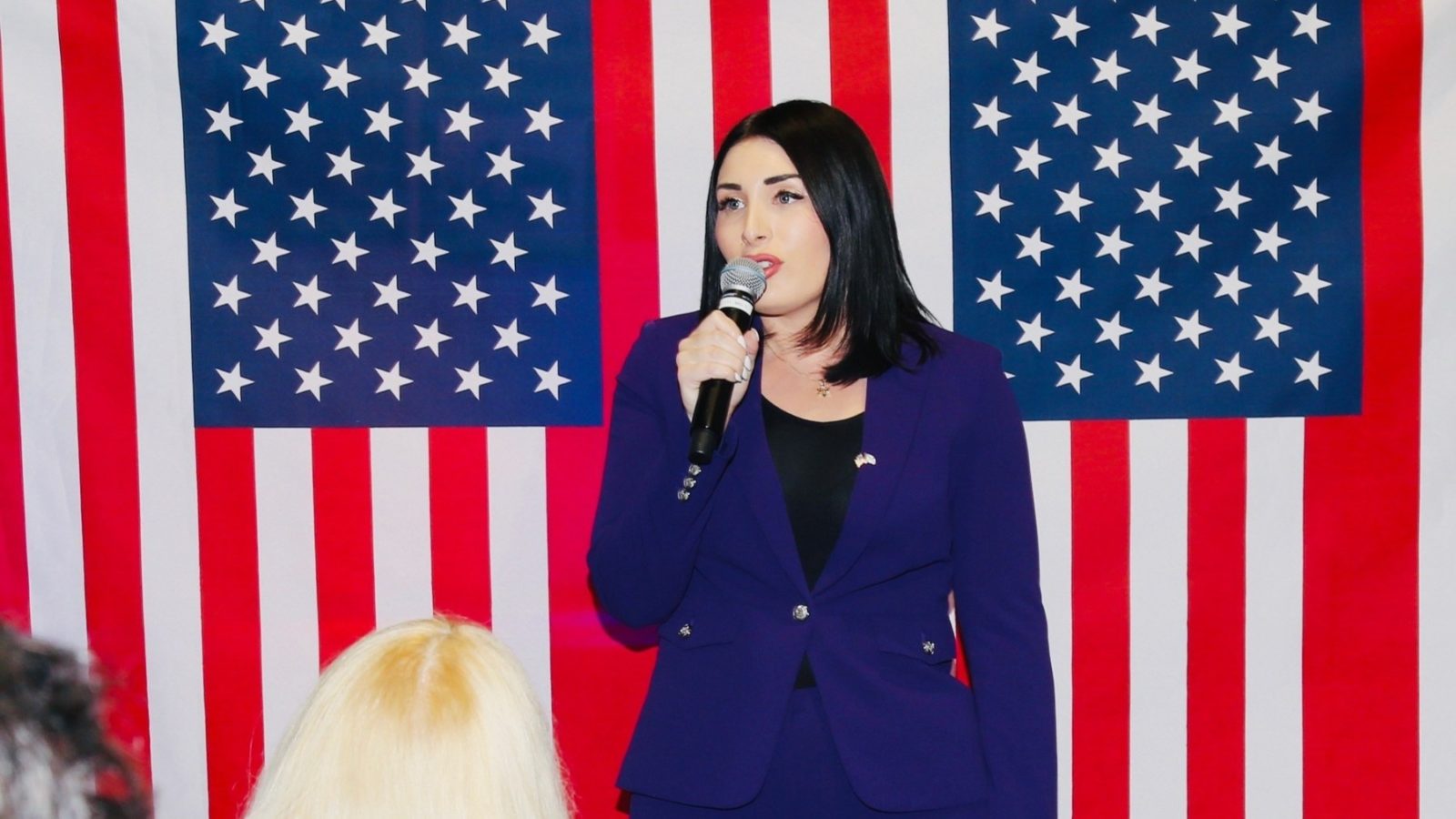 The far-right candidate is banking on a win in the Republican primary, but the general election will be more of a challenge in a solidly blue South Florida district

Laura Loomer shot to fame in far-right circles as a kind of viral stunt performer who seemed unusually intent on staging random acts of provocation. Three years ago, the 27-year-old conservative agitator disrupted a “Julius Caesar” production — heavy on Trump allusions — in Central Park, and was promptly removed by security officers. In 2018, Loomer handcuffed herself to Twitter’s New York headquarters after she was kicked off the site for tweeting, among other things, that Rep. Ilhan Omar (D-MN) was “anti Jewish.” The list goes on.

“I’m literally the most censored person in the world,” claimed Loomer, adding that she has been banned from virtually every mainstream social media platform, including Instagram, Facebook and Periscope, as well as other services like Uber, Lyft and PayPal.

Now, Loomer is hoping she can pull off what may be her biggest stunt yet: running for Congress in South Florida’s solidly blue 21st congressional district, which includes President Donald Trump’s official Palm Beach residence, Mar-a-Lago. The seat is currently held by four-term incumbent Rep. Lois Frankel (D-FL).

Despite Loomer’s fringe status, experts in Florida state politics believe that she has a solid chance of winning the Republican primary today. Loomer, who entered the race last August, has racked up endorsements from the likes of Rep. Matt Gaetz (R-FL) and Roger Stone. Though Trump has not made an endorsement, he has tweeted in support of the candidate. And Loomer has outraised all of her opponents, having pulled in nearly $1.2 million, according to the latest filings from the Federal Election Commission.

Loomer has taken donations from some high-profile contributors on the right, including the deplatformed conspiracy theorist Alex Jones; Lydia Brimelow, who is married to the founder of the white nationalist website VDARE; Home Depot co-founder Bernie Marcus; and former U.S. ambassador Eric Javits.

“When I filed to run, people were mocking me on the left and the right because, I guess you could say, I’ve been a controversial figure, and a lot of people have very strong feelings about me because of the way that big tech and the media have demonized me,” Loomer told Jewish Insider in a recent interview, adding: “Now they just have egg on their face because I’m the frontrunner.”

Still, Loomer’s war chest is not a sure sign of voter support, as many of the donations she has received have come from outside the state, according to former Florida Congressman Ron Klein, who chairs the Jewish Democratic Council of America. “People think she’s a viable candidate, but that’s not necessarily the case,” he told JI. “If she was raising money in the district, it would mean she had more momentum.”

“Her game is to be the shock candidate,” Klein added. “She says things that will shock the conscience, and that’s what makes it newsworthy.”

Born and raised in Arizona, Loomer attended Barry University in Miami Shores. Previously, she worked for James O’Keefe’s guerilla journalism outfit, Project Veritas, as well as Rebel Media, a right-wing Canadian news operation. Loomer moved to Palm Beach, she said, about two-and-a-half years ago after a stint in New York.

Loomer, who is active on right-wing social media sites like Parler and Gab, decided to run for Congress because of her experiences being booted from online platforms. “I do believe that big tech censorship is the most pressing issue this election cycle, along with restoring law and order,” said Loomer, who alleges, without evidence, that social media sites including Twitter and Facebook have enabled protest movements like Black Lives Matter, which she describes as antisemitic, while silencing its critics.

Loomer, who is Jewish, said she feels a strong sense of connection with her faith. “I’m not a hyper-religious person,” she said. “I’m Jewish, but for me, it’s an identity. You know, being Jewish is also — it’s cultural, it’s political, and it’s a race. They classify being Jewish as a race now. And so you’re ethnically Jewish.”

Her grandfather, the late Harry Loomer, was a pioneering psychiatrist who was born in Brooklyn and earned his medical degree in Vienna, where he witnessed the Nazi annexation of Austria in 1938 and was arrested by the Gestapo only to be released when the U.S. consulate intervened.

Loomer describes herself as an “open Zionist” and has been to Israel, she estimated, five times — first on a Birthright trip in college and subsequently with the United West, a Florida-based nonprofit that the Southern Poverty Law Center has classified as an “active anti-Muslim group.”

“What we do is we take people to Israel to learn about national security and Zionism,” said Loomer, adding that last year’s trip was focused on border security.

Loomer is one of several far-right Republican candidates this cycle who have emerged as contenders in congressional elections, including Marjorie Taylor Greene, a QAnon believer who recently won her runoff in Georgia’s 14th district and is expected to claim victory in the general election.

Joseph Uscinski, an associate professor of political science at the University of Miami who specializes in conspiracy theories, said that candidates like Greene and Loomer have been able to harness support by taking advantage of low-turnout elections. “These alt-right and QAnon people can win because primaries attract very few voters,” he told JI.

But even if Loomer advances beyond her primary, she will have a hard time defeating Frankel in a district rated “solid Democratic” by The Cook Political Report. “In that district, it’s almost impossible to see how Loomer pulls it off,” said Rick Wilson, a former Republican strategist and so-called “Never Trumper,” who is based in Florida.

Loomer’s incendiary comments will also likely alienate her from voters in the district, according to Steven Tauber, a professor of political science at the University of South Florida. “Loomer certainly has supporters,” he said, “but she is extremely divisive because of her bigoted statements against Muslims and her outrageous claims that mass shootings, including Parkland, were staged.”

Steven Schale, a Democratic strategist in Florida, was more emphatic in his appraisal of Loomer’s chances. “Do I think a candidate whose views and public statements are so absurdly loony that she’s even been banned by basically every platform imaginable — she can’t even get food delivered by Uber Eats — do I think she can beat Lois Frankel?” he said. “Let’s just say I have a better chance of being named the starting quarterback for the Jaguars.”

Loomer disagrees that she won’t be able to harness support should she make it to November, citing an internal poll that she claims gives her a nine-point lead over Frankel in the general election. When JI requested the poll in a text message, Loomer replied with a link to a Breitbart report but did not go into specifics about the manner in which the poll was conducted.

A separate poll from an outside firm puts Loomer four points behind Frankel in a hypothetical matchup.

Polls aside, Karen Giorno, Loomer’s campaign manager, who previously served as Trump’s chief Florida strategist during the 2016 election, believes her candidate should not be underestimated. “Is it a blue district? Yes,” she said. “Is it unflippable? No.”

Giorno told JI that she came out of retirement to help Loomer get elected. “She is kind of a political celebrity in her own right, but she reminds me very much of a little mini Donald Trump,” Giorno enthused. “You know, she doesn’t sleep; he doesn’t sleep. They work off of four hours a night, if that. They are a bundle of energy.”

For her part, Frankel seems unconcerned by the prospect of going up against a young conservative rabble-rouser with no experience in government. “With COVID-19 still rampant in Florida, I am focused on saving lives and livelihoods,” the congresswoman told JI through a spokesperson.