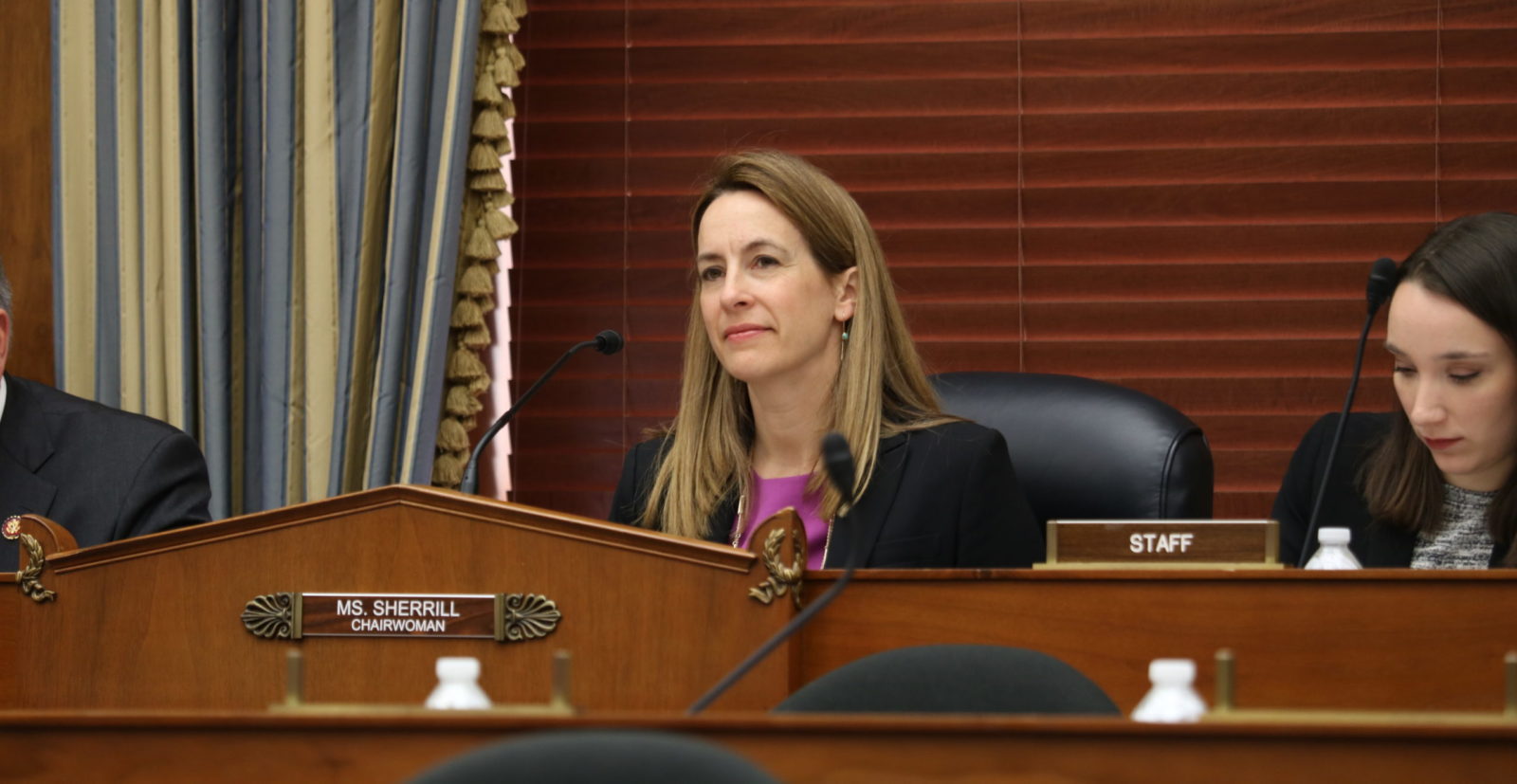 The freshman congresswoman overcame the odds to flip a historically red district in 2018. Will she hold on to her seat?

Rep. Mikie Sherrill (D-NJ) has often been characterized as a moderate Democrat ever since she was elected to Congress in 2018, flipping a traditionally conservative enclave of northern New Jersey in the open-seat contest to succeed outgoing Republican congressman Rodney Frelinghuysen.

But in a recent conversation with Jewish Insider, Sherrill bristled at the notion that her politics were in any way straight down the middle. “Somehow moderate sounds sort of tepid,” she lamented. “I don’t feel in any way moderate about the need to create a different future for this country, to make sure that we’re investing in our economy so that everybody has a chance to get into the middle-class.”

However her politics may be described — she often eschews ideology in favor of more practical concerns like infrastructure and taxes — they have appealed to voters in the 11th congressional district, which includes parts of Essex, Morris, Passaic and Sussex counties.

The 48-year-old former Navy helicopter pilot and federal prosecutor now appears to be comfortably ensconced in her seat, despite a rocky start when she grappled with her decision to support the impeachment of President Donald Trump at the risk of alienating some constituents.

Sherrill, who is now running unopposed in New Jersey’s July 7 Democratic primary, will likely face Rosemary Becchi, a tax policy lawyer and the sole Republican in the race, come November. But experts say Sherrill is the frontrunner.

“It’s a pretty safe bet that she’s not going to have a rough ride to re-election,” said Krista Jenkins, a professor of political science at Fairleigh Dickinson University. “You certainly can’t paint her as a progressive firebrand, and I think that’s what a lot of voters in her district are going to want to see.”

“Mikie is safe,” Alan Steinberg, a columnist for Insider NJ, said in an email. “An excellent center-left Democrat.”

For her part, Sherrill isn’t taking anything for granted. “I don’t really feel safe,” she told JI. “I feel like this district is a district where there’s so many different opinions and certainly some people feel very supportive of different pieces of what I do, and some of those same people are very against some of the other things I do. So it feels like given any issue, there’s a wide variety of opinions.”

Regardless, Sherrill appears to have become more comfortable expressing her disapproval of Trump’s policies as she wraps up her first term in Washington, even if her criticism is somewhat restrained.

“What I think this administration has done poorly is sort of politicize some of how we respond to this,” she said of the president’s efforts to curb the spread of the coronavirus.

The freshman congresswoman also takes aim at Trump’s foreign policy approach. “Right now there’s just a lack of true strategy,” said Sherrill, adding that the targeted assassination of Iranian Gen. Qassim Soleimani in January was a strategic error. “We had seen massive protests in Iran against leadership, which — I would have loved to foment more of that,” Sherrill told JI. “Instead, we sort of consolidated support for Iran’s leadership with our actions.”

Still, Sherrill appeared hesitant to come down firmly on one side when asked if she supported rejoining the Iran nuclear deal, which Trump pulled out of two years into his presidency. In a 2017 position paper, Sherrill seemed to express half-hearted approval of the Iran nuclear deal brokered by former President Barack Obama, writing that “Congress must remain vigilant in the enforcement of the agreement and be prepared to take immediate action should violations occur.”

“U.S. foreign aid and missile defense cooperation are critical to the defense of Israel, especially as we begin to understand the broad implications of implementing the Iran nuclear agreement,” Sherrill wrote, adding: “The seeming grey area in the deal surrounding ballistic missile testing leaves underlying questions as to whether Iran can be trusted to act in good faith and observe the full terms of the deal.”

In the paper, Sherrill also worried about rising incidents of antisemitic violence in the United States.

“A major concern of mine is the increase in the antisemitic rhetoric and actions that have occurred since the 2016 election,” Sherill wrote, adding that she “will always support Israel’s right to exist as a Jewish state, will work to ensure that our long-standing relationship with Israel remains strong, and will stand up to acts of hate here at home.”

Rabbi David Levy, regional director of the American Jewish Committee in New Jersey, said Sherrill has stuck to her campaign pledges and has been responsive when it comes to addressing the concerns of Jewish community members in the district.

“When the shootings happened in Jersey City,” he said, “she was one of the people, in 24 hours, who was on the phone calling me directly, finding out how the Jewish community was doing.”

Rabbi Richard Kirsch, a faculty member at Rae Kushner Yeshiva High School in Livingston, agreed with Levy’s assessment, noting that Sherrill was receptive to engaging with students in particular and had at one point welcomed them into her office during AIPAC’s annual conference in Washington.

“The students really like her because she connects with them,” he said.

Howard Tepper, a plastic surgeon in Livingston who is heavily involved with the district’s Jewish community, said, “for me, personally, she was an unknown before she came into her position, and she was very open to meeting with us, to hearing our concerns.” He added: “We were very active in encouraging her to make her first trip to Israel.”

In November 2019, Sherrill visited Israel for the first time on a bipartisan women’s trip led by Rep. Debbie Wasserman Schultz (D-FL) and sponsored by the AIPAC-affiliated American Israel Education Foundation. “I told my district it was a priority of mine, so I wanted to go and fulfill that commitment,” Sherrill said.

During the visit, she travelled to Erez, a kibbutz on the border with Gaza that is a sister community of the Jewish Federation of Greater MetroWest NJ, which sits in Sherrill’s district. The congresswoman, who brought her mother on the trip, said the experience shifted her perception of the Jewish state.

“The changing nature of the kibbutz in Israel is fascinating to me because as a young person growing up in America, you hear about the kibbutz experience, that’s sort of part of your image of Israel,” she said, observing that a new generation of Israelis seemed to be making an effort to reinvigorate the kibbutz tradition.

Sherrill, who supports a two-state solution to the Israeli-Palestinian conflict, is optimistic that a younger guard of Israelis will lead the charge in bringing stability to the region.

“You speak to the younger generation and you get the sense that they can solve anything, that this innovative culture is so cutting-edge that there is no problem they can’t solve,” she said. “So I have to say my hope is with the young people.”

She was doubtful, however, that the current Israeli and Palestinian leadership will be able to come to any sort of compromise. “That did not feel as hopeful,” said Sherrill, who met with Israeli Prime Minister Benjamin Netanyahu as well as the chief of staff to Palestinian Authority President Mahmoud Abbas during her visit. “That felt almost intractable, like the problems were too great to be solved.”

Sheri Goldberg, chair of the Community Relations Committee of the Jewish Federation of Greater MetroWest NJ, said Sherrill came back from her trip with a newfound ability to speak much more fluently on matters related to Israel and its relationship with the United States.

According to Goldberg, Sherrill has been a strong advocate for the Jewish community, noting that she was quick to denounce Rep. Ilhan Omar (D-MN) last February for invoking an antisemitic stereotype.

Omar, of course, is a de facto member of the so-called “Squad,” the quartet of progressive stalwarts including freshmen Reps. Ayanna Pressley (D-MA), Rashida Tlaib (D-MI) and Alexandria Ocasio-Cortez (D-NY) who were elected in the same election cycle as Sherrill.

The New Jersey congresswoman — who strongly believes in bipartisanship as a means of achieving legislative results for her constituents — is unlikely to be seen as a member of that left-leaning clique.

But she still thinks the dichotomy between progressives and so-called moderates, or centrists, is overblown, suggesting to JI that ideological battles are less important than getting bills passed.

“I don’t think there’s an appreciation of some of the important work that Congress is doing,” Sherrill averred.