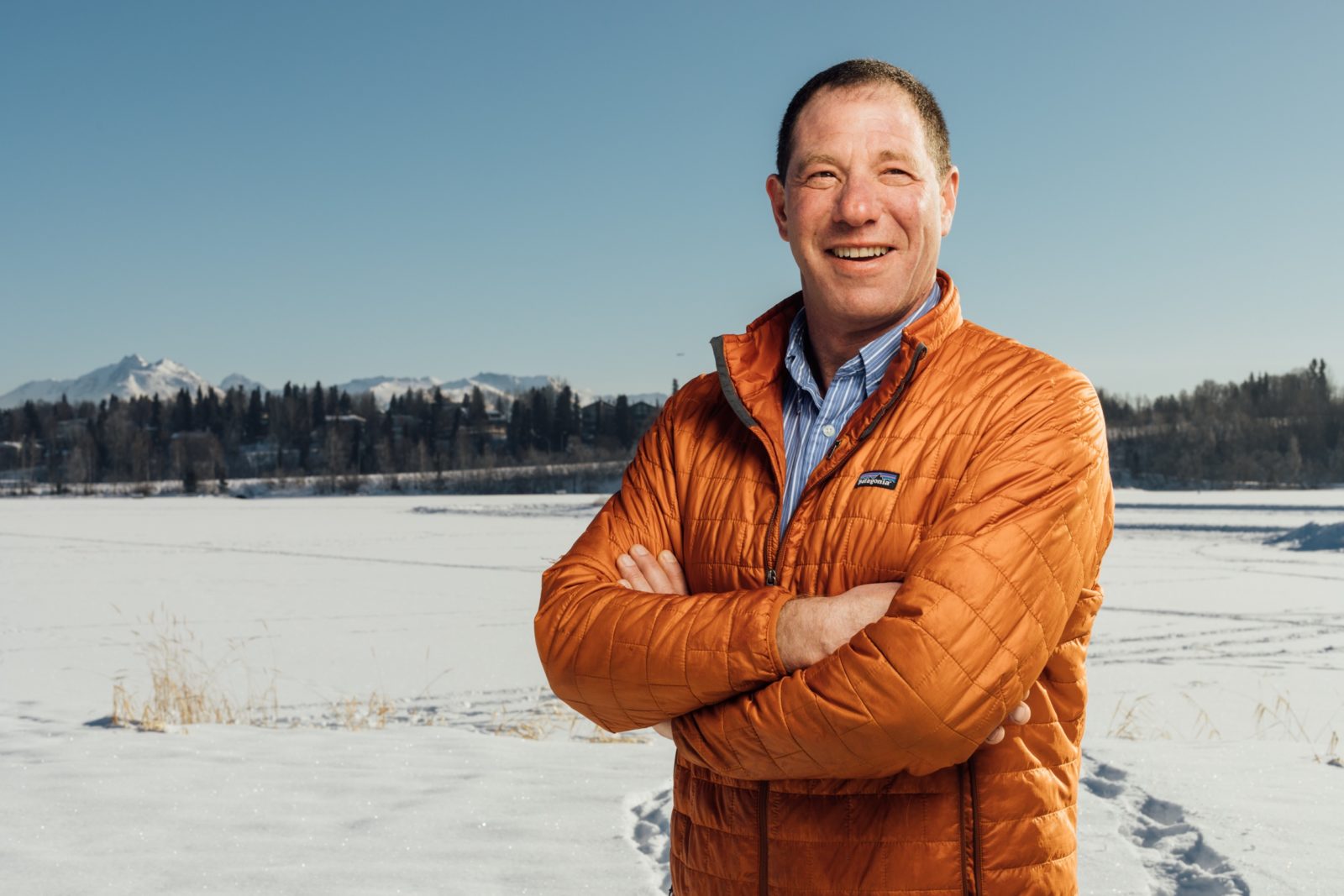 Al Gross is an ideal Senate candidate — at least by Alaskan standards.

The 57-year-old former orthopedic surgeon entered the state’s Democratic primary race last summer as an independent. In an introductory ad, a gravelly voice-over narration touted his rugged background as a commercial fisherman, itinerant ocean hitchhiker and gold prospector who once killed a grizzly bear in self-defense. (It snuck up on him while he was duck hunting some 40 miles south of Juneau.)

Gross’s compelling story has caught the attention of the national media as he competes in the state’s August 18 primary for the chance to challenge first-term Republican Sen. Dan Sullivan in November. The nonpartisan Cook Political Report recently upgraded the race from “solid” to “likely Republican,” giving the Democrats a glimmer of hope as the party attempts to flip the Senate in November.

Though Gross is running as an independent, he has support from the Democratic Senatorial Campaign Committee. Sen. Chris Coons (D-DE), who attended Amherst College with Gross, offered an enthusiastic assessment of his former classmate in a statement to Jewish Insider.

“He’s a lifelong Alaskan with a deep understanding of the complex policies that impact our environment, our healthcare system and our place in the global community,” Coons said in his statement. “Al is informed, passionate and will legislate in a responsible and progressive way to protect Alaskans — and all Americans. He will be a valuable ally who supports a strong U.S.-Israel relationship. He’s a different kind of candidate, and he will be a strong voice in the U.S. Senate.”

Gross is confident that he can defy the odds and oust Sullivan this cycle, pointing out that Alaskan voters have a strong tendency to favor independent candidates. The Alaskan-born candidate’s father, Avrum Gross, was a Democratic attorney general who served under Alaskan Gov. Jay Hammond, a Republican who represented the state from 1974 to 1982 and whom Gross described as a “role model and a friend” during his formative years.

“That relationship and friendship is why I registered as an independent when I was 18,” Gross told JI in an interview, “because it was always about working together for the betterment of the state.”

Gross, who is Jewish, has long felt like an outsider in a state that takes pride in them. His bar mitzvah, he said, was the first ever in southeast Alaska — his parents flew in a rabbi for the ceremony — and there were only a few Jewish kids in his Juneau high school.

“I’ve been a minority, and that’s what I’ve known since I was a young kid,” he said. “We joke that we’re the ‘frozen chosen’ and the ‘extreme diaspora’ up here.”

He got the chance to explore his “cultural heritage,” as he described it, after graduating from high school in 1980, when he took a year off to travel and work odd jobs. During that time, he spent four months in Israel, three of them volunteering on Kibbutz Gat in southern Israel.

“Spending those four months in Israel really had a profound effect on me,” Gross said, “coming from the biggest state in the country to one of the smallest countries in the world and seeing and understanding the security concerns of Israel.”

“It made me feel a part of a larger community,” he added. “It made me understand some of the issues that I’d been reading about from afar and seeing what Jews throughout the world were going through, and I’ve carried that knowledge back home to Alaska as an adult.”

When it comes to geopolitical dynamics in the region, Gross supports a two-state solution to the Israeli-Palestinian conflict, arguing that President Donald Trump and Israeli Prime Minister Benjamin Netanyahu have taken a unilateral approach that he sees as ineffective.

“It’s critical that the Palestinians be part of that discussion,” Gross said.

Gross has similar complaints about Trump’s decision to pull out of the Iran nuclear deal, otherwise known as the Joint Comprehensive Plan of Action, or JCPOA.

“I was very disheartened to see Trump pull out of the JCPOA,” he told JI. “I think we should go back into negotiations with the Iranians to ensure that they do not develop a nuclear weapon. But we need to go back to the table with them and negotiate with them, rather than just unilaterally pull out of a prearranged agreement.”

Gross believes that antisemitism is alive and well, even in a remote state like Alaska.

“It’s something that we can’t ignore, and it’s something we’re going to be living with, probably, well into the future,” he said. In high school, he said, his son experienced antisemitism when a classmate wrote the word “Jew” on the back of his jacket in black magic marker. “Just when you think there isn’t any antisemitism, it rears its ugly head.”

“I’m not convinced that legislation by itself is going to solve the problem,” he said. “I think education is the best place to start. People are fearful of the unknown, and I think a lot of people don’t understand what the Jewish religion is or what Jewish people are like, and they’re afraid of them.”

If elected, Gross would be the second Jewish senator from Alaska in a state that has only had eight senators since it achieved statehood in 1959. The first was Ernest Gruening, who served from 1959 to 1969.

Though the coronavirus pandemic has hobbled campaigns across the U.S., Gross avers that his message has only become more relevant in the crisis. He left his profession in 2013, got a masters in public health and now advocates for lower healthcare costs.

“I felt like I had a wide open avenue to race with my platform long before COVID-19 came along,” he said. “Now that we’re in the midst of a worldwide pandemic, it really underscores the need to address some of the healthcare problems that we have in our country and to send people to the Senate who have an understanding of our healthcare system.”

Gross believes he is in tune with the concerns of everyday Alaskans. “I think I have some really good ideas as to how to develop an economy that succeeds in Alaska — that isn’t so critically dependent on natural resource extraction,” Gross said. “Dan Sullivan has nothing other than the status quo to offer, which isn’t working.” (Sullivan’s campaign did not respond to a request for comment.)

In the primary, Gross is competing against Democrat Edgar Blatchford, a former Alaskan mayor and an associate professor in the department of journalism and communications at the University of Alaska Anchorage, and another independent, Chris Cumings, who previously ran for Alaska’s House at-large seat in 2018, garnering only 8% of the vote in the Democratic primary.

Blatchford and Cumings both told JI that they have largely vowed to abjure political donations, which gives Gross a sizable advantage in the primary. He has raised more than $3 million in his effort to unseat Sullivan, according to the Federal Election Commission.

While experts say Gross is very likely to win the primary, his buccaneer bonafides may not be enough to give him a victory in the fall.

“He ticks a lot of boxes,” said Amy Lauren Lovecraft, a professor of political science at the University of Alaska Fairbanks. But, she added, while Gross has strong and prominent advertising, “the odds are just against Al” in a state that consistently trends red and that went for Trump by nearly 15 percentage points in 2016.

Forrest Nabors, a political scientist at the University of Alaska Anchorage, was also skeptical that Gross would emerge victorious in the general election, using a baseball analogy to suggest that he wouldn’t bet on the candidate’s prospects.

“Right now,” he said, “it’s kind of like the Yankees playing Baltimore.”

Still, there are occasions in which the Orioles beat the Yankees, and Gross is banking on such a dynamic as he enters the final four months of the race.

“I stepped forward because I thought I could win,” he said. “The state very much will swing to the middle if the right candidate is there, and I think I’m in a position to win.”