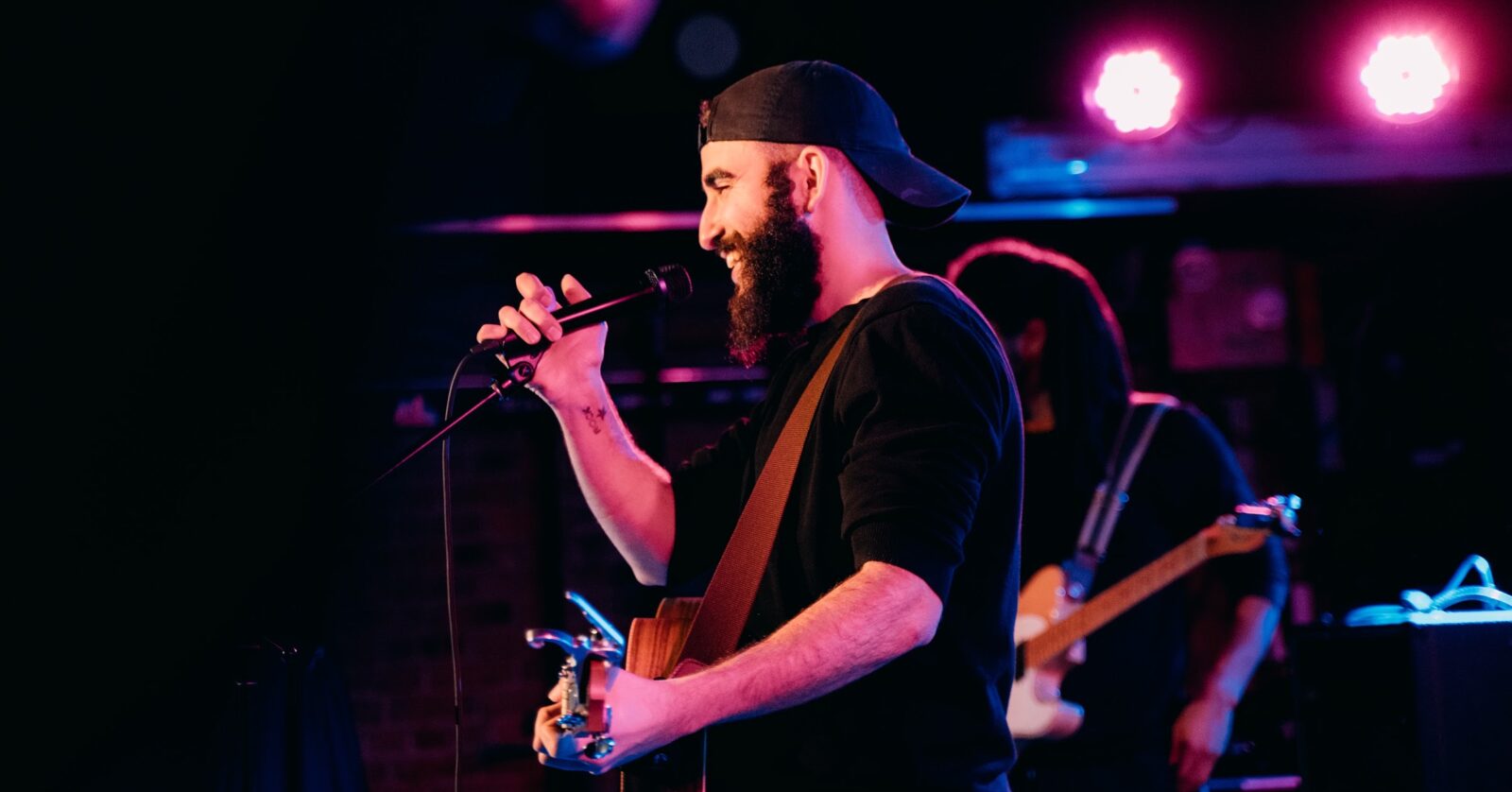 From the Bowery to its Ballroom, Jeryko is breaking walls with sound

When singer-songwriter Yaniv Hoffman got married in January, he couldn’t have anticipated that just two months later he and his wife, fashion designer Simi Polonsky, would be holed up in their Crown Heights apartment sick with the novel coronavirus. Though they have since recovered, the experience was a grim reminder of the recent past. Polonsky, a co-founder of the Frock NYC — a modest clothing line — lost her first husband in 2017 to an unexpected stomach virus.

Hoffman adopted Polonsky’s three children earlier this year. “It’s a very intense time for us, but it’s also a very special opportunity to really build our family unit without any distractions,” he told Jewish Insider in a recent Skype interview. “In a weird way, on a personal level, I’m kind of grateful for this opportunity.”

The clear-eyed optimism of Hoffman’s remark carries over into his music. Using the stage name Jeryko, the 28-year-old vocalist and guitarist performs an intimate, emotionally direct, autobiographical kind of folk rock that incorporates elements of soul, hip-hop and electronic dance music. His new, six-song EP, Human, traces his transition from single into married life with earnest dedication, including such titles as “Find You,” “Our Story” and “Friends,” which he wrote soon after he met Polonsky.

Hoffman, who sings with an unprocessed voice that draws the listener in, has been on an upward trajectory since he began performing as Jeryko at the end of 2017, after a long hiatus from music. “Pretty quickly he’s been able to build up a following, and not only in the States or in New York,” said Shimi Levy, the producer and DJ whose stage name is Levyticus.

“He’s talking about relatable issues that a lot of people deal with,” said Levy, likening him to such singer-songwriters as Alec Benjamin and Mike Posner. Still, Levy said, Hoffman has an approach that is uniquely his own.

In June 2018, Levy produced a song, “Bulletproof,” in collaboration with Hoffman. “He really had a clear vision of how he wanted it while still letting me be creative,” Levy recalled. But what struck Levy the most was how little Hoffman wanted to doctor his voice in post-production, abjuring auto-tune. “He wanted it to be genuinely him,” Levy told JI.

Hoffman has always gone his own way. Raised in a Conservative Jewish household in Silver Spring, Md., he began playing music in middle school, when he met his longtime friend and former bandmate, Shlomo Gaisin, who now performs in the neo-Hasidic folk group Zusha. Together, they formed the rock band JudaBlue.

“I think that the initial thing about music that attracted me was the jam,” Hoffman told JI, “just getting together with other musicians and making noise and connecting.”

It was that sense of ecstatic connection that turned Hoffman into a seeker. After high school, he went to a yeshiva in Jerusalem, but he immediately felt out of place. “I got into Jewish study for the spirituality of it, and I just felt like I was immediately locked into this system that was a bit too — what’s the word? — constricting,” he said. “It wasn’t what I was looking for. I was looking for that experience of, like, being on a mountain.”

In Thailand, of all places, he found what he was looking for. “I was on my way to an ashram,” he remembered, “and I ended up in a Chabad house.” He became enamored with Hasidism and returned to the United States with a new set of values. He studied music business at New York University for a year and a half but found college life too “materialistic,” so he enlisted in the Israel Defense Forces and served as a commander in the West Bank.

Some of the first songs he released as Jeryko — “All We’ve Got” and “Fighting For” — were about his army service. “I actually wrote those songs standing at a guard post for like eight hours by myself, just singing in my head,” he said. “I didn’t even have a phone, so I had to remember all the lyrics.”

After the IDF, Hoffman returned to New York and got his degree, but his experience as a commander allowed him to engage with university life in a more meaningful way than before. With friends, he founded a campus advocacy group, Realize Israel, while taking music industry internships at places like Columbia Records.

Finally, the desire to produce his own music won out. “So I started Jeryko.”

The name is significant for Hoffman. In the Bible, he explained, Jericho is the first city Joshua seizes in the conquest of the land of Israel. “The whole story is about the Jewish people walking around the walls and breaking them down by blowing the shofar,” said Hoffman, whose middle name is Joshua. “It’s the idea of breaking down walls through sound, which is exactly what I want to be trying to do.”

Hoffman’s ecumenical approach, according to his old bandmate Gaisin, is what makes Jeryko a special act. “His music is laced with meaning,” Gaisin told JI.

Hoffman had not intended to perform full-time. When he made the decision to return to music, he was working at the Chabad House in Lower Manhattan — the inspiration for his song “On the Bowery” — and hosting regular Shabbat gatherings through Jew Culture, an outreach program he started.

Ultimately, Hoffman’s act proved to be more popular than he had imagined, and so he has taken his advocacy on the road. In some of the places he tours, he plans Shabbat meals, classes and immersive Jewish experiences to accompany his performances. “It’s kind of merging those two worlds of Jewish inspiration and music,” he said.

He has even merged his marriage with his work, playing at a charity event in Los Angeles at which his wife spoke.

Married life represents a new chapter in Hoffman’s progression as an artist. “When I was single, it was much easier to just take time off and focus on writing,” he said. “But now it’s late nights and you get a minute here and there.”

He met Polonsky in January 2019, he said, at a Shabbat dinner. “It was definitely not a love at first sight kind of thing,” he recalled. “It was appreciation and awe on my part, but definitely not romantic in thinking that I could handle this. But God has some crazy ways.”

“We’re just trying to build a different family, not your average family,” he told JI, “and we’re overcoming grief and hardship in order to create a beautiful, warm, happy life for these kids.”

Hoffman has managed to keep busy lately, even as he has been holed up in cramped quarters for the past month or so. When he spoke with JI last week, he had just recorded a new song, “These Days,” about the pandemic, which he produced late at night at his studio down the block.

“Are we going to take this experience and let it be as powerful as possible for us and make a change in our lives?” he wondered. “Just in terms of our gratitude and our appreciation for life? Are we just going to go back to our previous ways?”

Still, he is worried that the pandemic will hurt his career. Before the coronavirus, he had hoped to do more collaborations and to open for bigger acts, to expand his reach outside the Jewish world.

He had been scheduled to headline a show at the Bowery Ballroom, one of New York’s most prominent mid-size music venues — an indication of how far he has come since 2017. Though he was disappointed that the concert was cancelled, he was hopeful he would be able to return to performing sometime soon.

“If anything,” he said, “this is just going to build up people’s appetites to be experiencing exactly what I do — which is big communal gatherings where we just get to be together and have fun.”