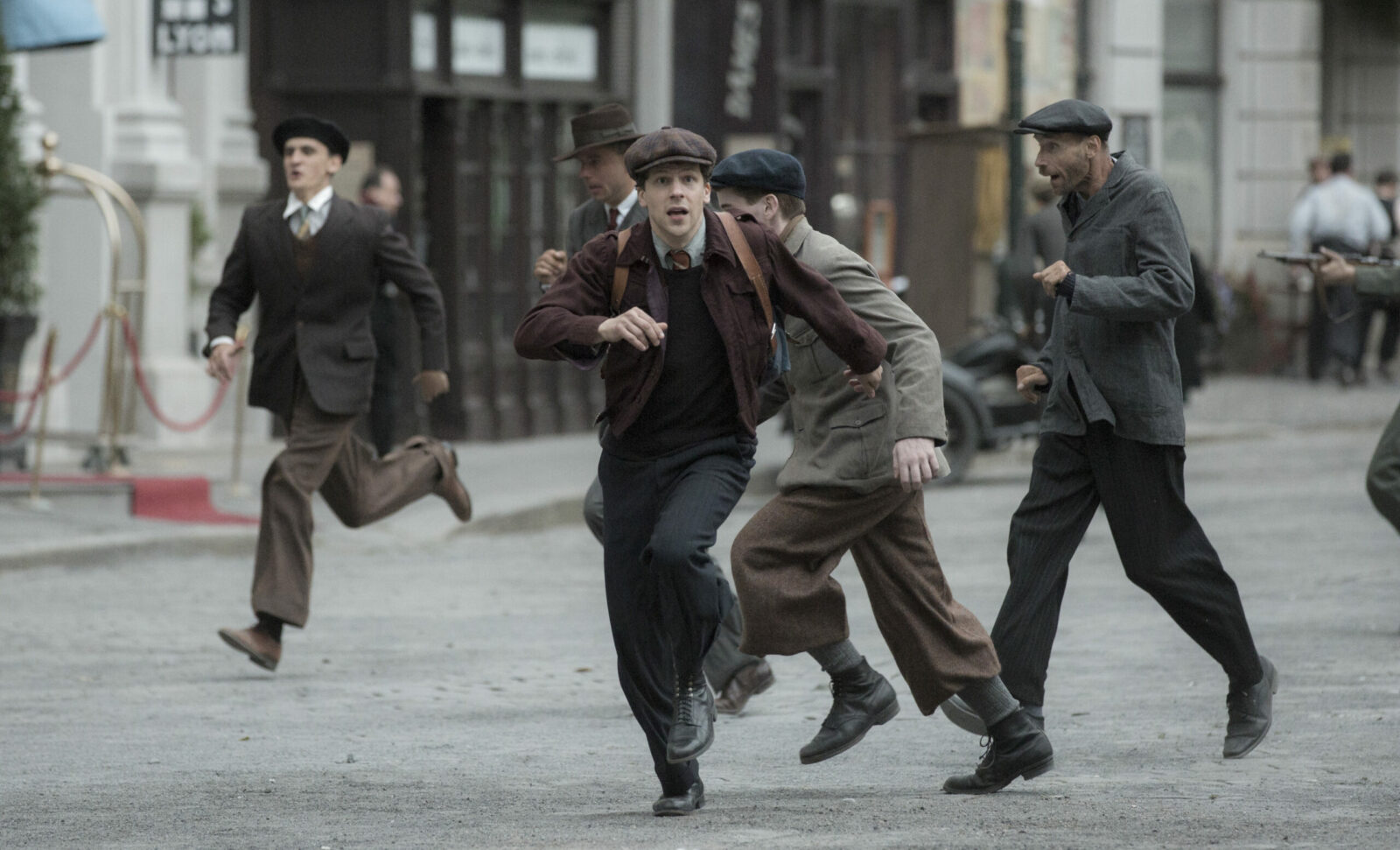 The power of silent ‘Resistance’

“I always felt the whole Shoah was too emotional for me,” the Venezuelan-born filmmaker told Jewish Insider in a recent phone interview from Los Angeles. “And I never thought I could make a movie about it.”

Then he learned the story of Marcel Marceau, the world-famous French actor and mime, who was a Jewish member of the French Resistance during World War II. The rest, as they say, is history, and “Resistance” — starring Jesse Eisenberg (“The Social Network,” “Zombieland”) — hits digital platforms nationwide today.

The sweeping Holocaust drama — which also stars four-time Oscar nominee Ed Harris and Édgar Ramírez — spotlights the efforts of Marceau and other Jewish resistance fighters to smuggle Jewish children out of France as Nazi forces closed in.

“What’s the best way to resist?” Eisenberg as Marceau asks in the film. “It’s not to kill them. It’s to survive.”

Jakubowicz, 42, said he was particularly motivated to tell the story of Jewish partisans fighting back during the war.

“There are so many great movies about World War II, but I always feel like there’s never enough,” he said. “This particular story, I feel like it’s unlike any other… This is a bunch of Jewish kids who decided to not wait, and risked it all to save all the Jews [they could]. And I find that very special and very important to be told in this day and age.”

As a child, Jakubowicz actually saw Marceau — who died in 2007 at age 84 — perform live. But he had no idea about his wartime bravery, or that the actor’s father was murdered in Auschwitz.

“I was actually shocked to even hear that he was Jewish,” the director said. “My jaw dropped when I heard that, not only was he Jewish, but he used his art — in a way created his art — in order to save Jewish children escaping from the Nazis.” Jakubowicz said that, as a filmmaker, he is always on the lookout for good stories, “and suddenly you find a story like that and you’re like, how has this not been made into a movie before?”

He was able to track down Georges Loinger, Marceau’s cousin, who served alongside him in the French resistance, and died in 2018 at the age of 108.

“I was able to meet with him, and he told me a lot of what you see in the film, firsthand — he was the only one still alive in that group who saved the children,” Jakubowicz recalled.

The director said shooting the film in Germany and the Czech Republic was a very emotional experience — including one scene in Nuremberg, the site of major Nazi rallies in the 1920s and 30s.

“We literally shot that scene [in Nuremberg] the night after the Tree of Life shooting in Pittsburgh,” Jakubowicz said. “And the whole thing just felt crazy. Jesse [Eisenberg] is an American Jew and me, surrounded by a crew of Jews and Germans, shooting a silent performance of a Jewish artist in the place that Hitler built for his rallies — there was a level of significance that I can’t compare to anything I’ve ever done in my life.”

Jakubowicz said there were many such moments during filming that have stuck with him ever since.

“There was a night where we wrapped right before Shabbat, and we gathered the whole crew on set and we lit the candles and said the Shabbat blessing,” he recalled. Many of the German crew working on the film “said they’ve never seen that in their lives. And a lot of them were teary-eyed, very moved by the whole scene.”

Throughout the shoot, Jakubowicz said, “there wasn’t a day where we were, you know, just shooting a movie. Everything felt very, very emotional.”

Jakubowicz, who was born in Venezuela in 1978, rose to fame for his 2005 film “Secuestro Express,” about a kidnapping, based on his own experience. It was a huge box office hit in Venezuela, but prompted angry backlash from the government, and led the filmmaker to flee for Los Angeles not long after. His 2016 film “Hands of Stone,” starring Robert De Niro, premiered at the Cannes Festival that year.

The filmmaker said his family has always been proud of his work, but this movie struck a more personal chord with them. When he first showed it to his mother — a doctor who lives in Tel Aviv — “she watched it three times back to back.”

One of the characters in the film, a young orphan who is saved by Marceau, is based largely on the life story of Jakubowicz’s aunt.

“She was hidden during the war in an orphanage run by the Catholic Church, just like the girl in the movie,” he said. “And so in a way the movie is a bit of an homage to my own family.” When the film screened at the Miami Film Festival several weeks ago, his aunt was in the audience, along with his father and brother.

The film was originally slated to hit select theaters today, but due to the coronavirus pandemic, it will become available instead today on digital platforms including Amazon, iTunes, Google Play and Apple TV.

“In a way I feel like it’s a good movie to watch right now, because it really gives you perspective,” Jakubowicz said. “We’re all convinced we’re living in the worst moment in history, but it’s really not.”