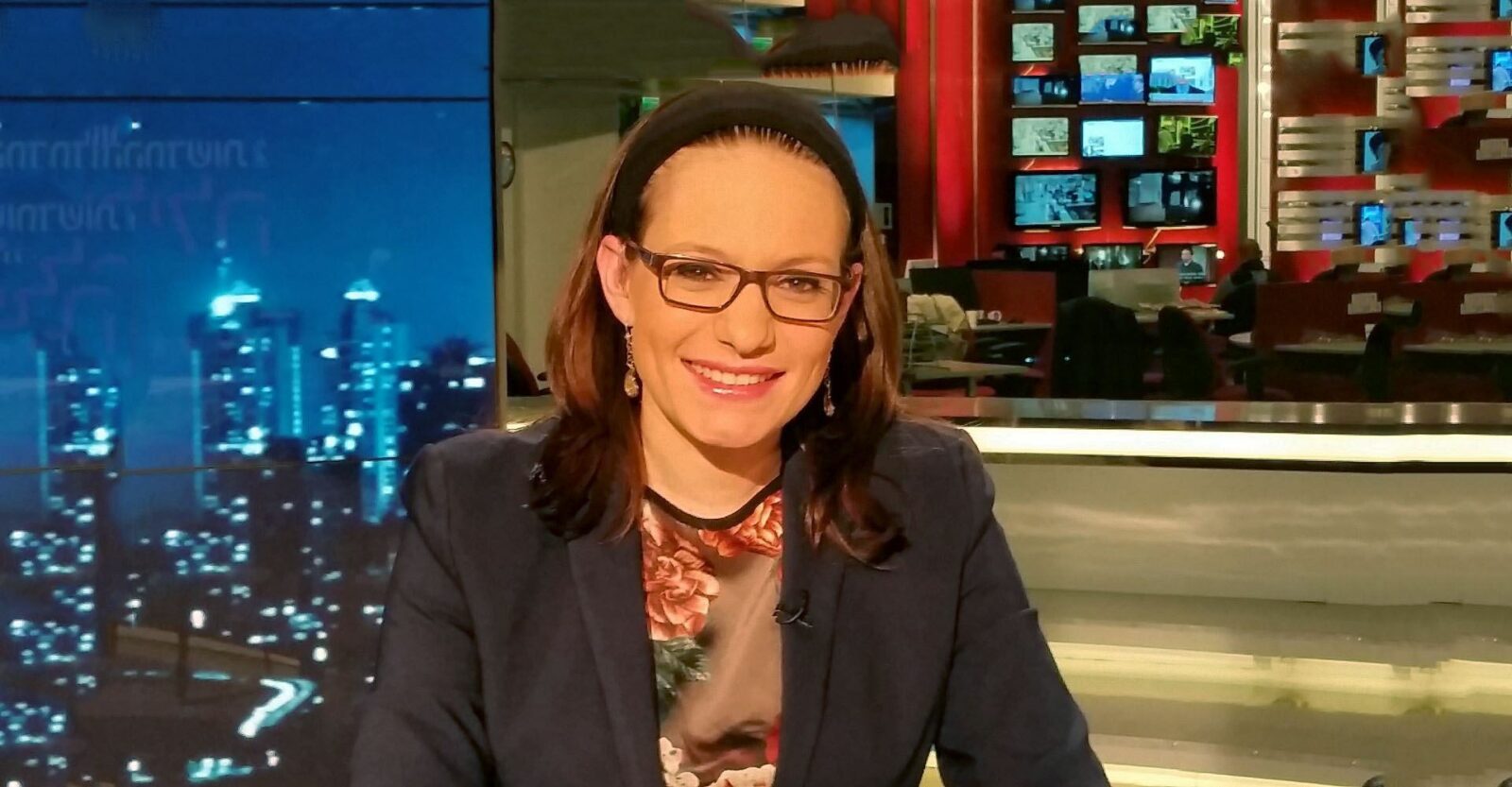 The Israeli journalist getting up close and personal with American Jewry

Sivan Rahav-Meir, a news anchor, reporter, author and Torah scholar, is spending a year crisscrossing the United States — and learning as much as she's teaching

Until last year, Israeli journalist Sivan Rahav-Meir had rarely spent more than a long weekend in the United States. But now, living in New York as an emissary for the World Mizrachi movement, Rahav-Meir and her family have come to experience a whole new swath of Jewish life — and holidays.

“I was sent here in order to teach, but basically I think I came here to learn,” Rahav-Meir told Jewish Insider in a recent interview. “I see how it is to shape your identity as a minority and not a majority. I’m used to living in a place where my culture is the culture. But since we’ve been here, we’ve had Halloween, Thanksgiving, Christmas, the Super Bowl.”

In late August, Rahav-Meir and her husband, Yedidya Meir, a writer and radio host — plus their five young children — left their home in Jerusalem to temporarily put down roots in Woodmere, New York for a year of teaching, lecturing, touring and connecting with Jews across North America. At times with Yedidya but often solo, Rahav-Meir gives Torah classes, political briefings, lectures on parenting and marriage as well as speeches about bridging gaps between secular and religious and Israeli and American Jews.

Rahav-Meir is already well-versed in traversing communities. She grew up in a secular family in Herzliya and became religiously observant as a teenager. She began working as a journalist from a very young age, writing for youth magazines and appearing on children’s TV programs, eventually becoming best known as a reporter and anchor with Channel 12 News. She has authored several books, including a book of weekly Torah lectures that was published in English as #Parasha: Weekly Insights from a Leading Israeli Journalist. And now, she’s embarking on a new mission, to connect with and better understand the American Jewish community.

With six months under her belt, Rahav-Meir has come to learn that “all the jokes about Israelis and the jokes about Americans are true.” It’s easier for her to understand “why people see us [Israelis] as rude and impolite — because you are so, so polite,” she said. When she writes work-related emails in English, Rahav-Meir sends them first to a friend “and she translates it from English to American. She adds all the, you know, ‘hope all is well,’ ‘looking forward’… the nuances that are completely different.”

On a more serious note, she says, “it’s not only the nuances, the being more or less polite. It’s the way we are shaped as Jews and the confidence sometimes we have as Israelis” in our identities.

For the past six months, Rahav-Meir has crisscrossed North America, visiting California, Texas, Canada, Maryland, Florida and many cities in between. On Tuesday she’ll be talking politics in Chicago; this weekend, she and her husband will be the scholars in residence at two synagogues in Teaneck, New Jersey; and next week she’ll discuss the polarizations between Orthodox and secular and American and Israeli Jews in Stamford, Connecticut. And she’s still booking lectures and events for the next few months — at least.

In between all her travels, Rahav-Meir gives a weekly Torah class at Stern College, in both Hebrew and English, which is broadcast live on Facebook and YouTube, and distributed via Whatsapp, and as a podcast — and even through El Al’s in-flight entertainment system.

And despite her crazy schedule, Rahav-Meir hasn’t given up her weekly column in Yediot Aharonot and the Friday radio show she co-hosts with her husband on Galei Tzahal (Army Radio). And she has still been reporting live for Channel 12 News more than she ever imagined.

“I covered a lot of terror attacks in Israel over the years,” she said. “I came here and the last thing I thought was that I would report live from terror attacks here. I covered the Jersey City [shooting] and the Monsey [Hanukkah stabbing] of course.” It’s important, Rahav-Meir said, to also talk about the “minimization of antisemitism. The fact that you see a swastika here, or hear a curse there, it becomes often and it’s not rare anymore.”

Since her family has been in New York, Rahav-Meir said she has heard from many Israelis who ask if she feels safe amid the recent wave of antisemitic attacks. “Are you really afraid to go with a kippa or tzitzit? Do you really feel it?” Friends and family have asked her. “Let’s face it,” she said, “most of us do not feel it on the street every day, but it is shocking, and it forces us to ask hard questions about our identity.” America, she said, was once thought of as “the ultimate place” for Jews to feel safe, “the goldene medina. And it turns out, no, this is not the promised land.”

Rahav-Meir made it clear that, as an emissary of World Mizrachi — the global religious-Zionist organization — she is not in the U.S. to convince anyone to make aliya. And most American Jews she meets, she said, have no plans to do so.

“They love the concept of aliya,” Rahav-Meir said. “Aliya is a very positive value… So many people tell me, ‘I wish my kid would make aliya, or my grandfather.’” But she recognizes that the millions of Jews living in the U.S. “are not making aliya tomorrow morning. So we have to ensure a strong identity here.”

And everywhere she goes, Rahav-Meir said, she is asked one thing over and over again about Israel: the elections. “I see people are really disturbed” by the three consecutive elections, she said. “They are confused, they are bothered by the fact that their beloved homeland is going through something that is not healthy.” At every lecture, she said, she fields questions about Benny Gantz, Yair Lapid, Benjamin Netanyahu, Arye Deri and other Israeli political figures.

When the veteran journalist arrived in New York in August, she never dreamed that she would be missing not one but two election campaigns in Israel. But, to be honest, she’s fairly relieved.

“I’m quite happy I’m not in this mess right now,” she admitted. “Because I’m sure if I was there I would feel frustrated… three elections, three campaigns one after the other — that’s crazy in one year. I’m really glad to zoom out this year and see things from a bird’s eye view… If I had to pick one year to be away, this was probably a good year.”

While she’s skipping the campaigns, Rahav-Meir won’t be missing out on voting or on election night. As she did in September, Rahav-Meir will soon travel back to Israel to cover the March 2 election for Channel 12 News, before returning shortly afterward to New York.

There is one thing she hears repeatedly from Israelis living in the United States: “They all tell me, don’t make the mistake we did, don’t stay here,” she said. “They all say, ‘we only came for one or two years and look at us now, 30 years later.’ They warn me.”

While the Meir family hasn’t closed the door on staying for a second year, two years is the maximum allowed by World Mizrachi. Regardless, she said, there’s no question they will be returning to Israel. And while Jerusalem is calling, there are things Rahav-Meir has begun to appreciate about the unique communities of American Jews she has encountered.

“The type of haredim in America — it’s beautiful,” she said. “Someone could be a doctor, but also learn seriously, or give a shiur, it’s a real mixture… I appreciate that type of Orthodoxy, and I see it in many communities [in North America].” Rahav-Meir also admires the wide range of outreach organizations of all denominations across the country. “They really care about their fellow Jews out there, about reaching out to the unaffiliated.” She’s also been impressed when visiting tiny observant communities like in Memphis, Tennessee — where “every person counts, you need everyone” — and huge ones like in Boca Raton, Florida — “it’s like an empire.”

And what will her kids miss once they head back to Israel?