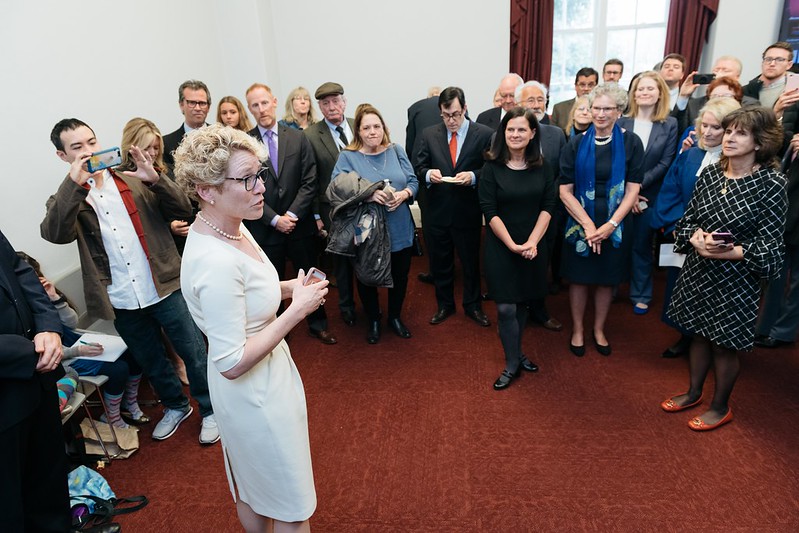 Rep. Chrissy Houlahan discusses how she learned about her Jewish ancestry and talks about her “Brady Bunch-ish family”

About halfway into a conversation with Rep. Chrissy Houlahan (D-PA), the freshman congresswoman is asked about a line that has appeared in other stories published about her — that she doesn’t identify as Jewish. The few throw-away words are so definitive, and they particularly want for further unpacking since the congresswoman has talked about her Jewish grandmother and great-grandmother turning her father, born in 1942, over to a childless Christian couple so that he could survive the Holocaust.

After the war, Houlahan’s grandmother and great-grandmother trekked some 800 miles across war-torn Europe to reclaim, with some difficulty, her father from a couple that had grown attached to him. “When you have a cute, little four-year-old that you’ve raised effectively, why would you give that child up for uncertainty when you know what you have?” Houlahan says. “There was apparently a lot of consternation over that.”

Talking about her father immigrating to New York’s Lower East Side with his mom and grandmother, she takes a well-worn, stuffed brown bear off her shelf. Cradling it in her hands, she says the bear is a toy her father brought back from Poland.

“This is something my dad allows me in my office to remember how far we’ve come,” she says of the bear. How is it that this person, with one of the most hyphenated, Renaissance woman-styled identities in Congress — Air Force veteran, former Teach for America chemistry teacher in Philadelphia, entrepreneur who co-founded a basketball apparel company, and engineer — doesn’t identify with the heritage of her dad?

Growing up, Houlahan didn’t know anything about her background, and she didn’t realize when asked whether she identified as a Jew that one could do so based on heritage rather than faith or practice. “That’s basically where I land. Early in the campaign, early in the conversations, I didn’t know what words to use,” she says. “For instance, my dad always said that he was an ‘immigrant.’ He never said he was a ‘refugee.’ He never said he was a ‘survivor.’ He never said those words. Those words are loaded words. The same word to me is, ‘Are you ‘Jewish’?”

“Well, I don’t practice the faith. My mother’s heritage is not Jewish,” she adds. “Help me help you have this conversation. Because I’m not denying anything. I’m just not certain what the right words are, because I don’t want to claim or own anything that is somebody else’s.”

So there you have it. Introducing, perhaps for the first time, the not-not-a-Jew, who frankly was going to be a nonconformist from the start. Walking through the Longworth House Office Building halls, visitors see two or three flags anchored by wall mounts and bookending seemingly every representative’s door. Outside Houlahan’s office, three wall mounts buttress poles containing U.S., Pennsylvania, and prisoner-of-war flags. And then a fourth, free-standing pole contains a rainbow flag. (One of Houlahan’s three daughters is LGBTQ.)

The four flags, Houlahan says, took some finagling. “I don’t think I should be asked to have to choose between any of them,” she says, noting that she has tried to get another wall mount. Due to fire codes, her “poor team” has to put out the fourth flag each morning and take it down each evening. “I’ve tried to change the rule,” she says. “This is why I’m here in Congress.”

Inside her actual office Houlahan hung a large quilt, which her North Carolina-based aunt made.

“Aside from my immediate family, my extended family are Republicans, and most of them live in the south,” she says. The quilt contains eight-pointed stars representing each woman elected in 2018. Asked why there appear to be more stars than women elected to Congress in 2018, she says, “My aunt may have miscounted. Hopefully more women will be elected next Congress.” Houlahan has hosted several cocktail hours to bring fellow freshmen to sign their stars, and an adjacent wall contains more stars, where constituents too may affix their signatures.

In the late 1980s, Houlahan — then Chrissy Jampoler — had no idea when she headed to a hairdresser in a Polish Chicago neighborhood that she was about to have a haircut from the Twilight Zone.

The hairdresser struck up a conversation and asked her name. When the latter heard Jampoler, she told Houlahan, then in her late teens or early 20s, “Oh. That’s a Jewish name.” Houlahan was stunned. She’d never met anyone with that name, save her father’s tiny immediate family.

As a kid, Houlahan knew not to ask about her family on either side. Her father had fled Poland with his mother and grandmother, and Houlahan knew she had no other paternal relatives. Her father, a 24-year Naval aviator, knew not to talk about being born behind the Iron Curtain while the United States was at war with the Soviet bloc in Poland.

On the other side, Houlahan’s maternal grandmother, who was Roman Catholic, and maternal grandfather, who was abusive, had their marriage annulled. This simply wasn’t something one talked about in the 70s, when she was a teenager. “You didn’t acknowledge that something painful like that happened,” she says. When her grandmother remarried, Houlahan saw her grandmother’s husband rather than her biological grandfather as her grandfather. “This was sort of a Brady Bunch-ish family,” she says. (In grade school, Houlahan went to school one day armed with a note from her parents exempting her from participating in a family tree school project.)

The anagnorisis experience at the Chicago hairdresser set Houlahan on a journey of trying to piece together her family heritage. She learned that her father, born in 1942, was Jewish and had lost his entire family besides his mother and paternal grandmother in the Holocaust. His family left him as a baby with a church in Warsaw, and a childless, Christian couple raised him. After the couple finally gave him up, Houlahan’s father and his mother and grandmother traveled to Bremen in northwestern Germany and then, with the sponsorship of her dad’s uncle, by boat to New York.

Her dad went on to graduate from Columbia University before he was 20 and enlisted in the Navy, where he met Houlahan’s mom. Her father and maternal grandfather flew Lockheed P-3 Orion planes in the same squadron. Then 20, her dad married the boss’ daughter, Houlahan says. “That’s why I have three generations of military. One generation just got here,” she says. “The other reason why my family is complicated is that his mom, my grandmother, remarried a guy from Chile, and they moved to Puerto Rico together. So then they had two girls in Puerto Rico, who are my aunts, who are about six or seven years older than I. To kind of look at me, you wouldn’t necessarily think my dad is Jewish. Aunts are Puerto Rican. I have other cousins, who are Japanese. It’s crazy.”

A family likes her is today’s American story, and that’s what makes the country beautiful, Houlahan says. “That one generation later you can have this kind of American dream,” she says. But that’s also “what’s so destructive about what’s happening right now in our country to the values we have.”

Last August, Houlahan was one of 72 members of Congress (the largest such delegation to date) who went on a trip to Israel funded by the American Israel Education Foundation, AIPAC’s non-profit educational arm. Although the agenda was so packed that she didn’t have a chance to see the buildings that her paternal great-grandfather, an architect, had built in Jerusalem, Houlahan was moved by her first visit to the country.

“I was really impacted by the people, the landscape, and the country,” she says. “I was very lucky that I got to share that with my husband, which was really phenomenal.”

There wasn’t going to be any evolution in Houlahan’s thinking about the Boycott, Divestment, and Sanctions movement, says the congresswoman, who was one of 12 House Democrats who broke party ranks last May and voted with a Republican motion to block pro-BDS language in a retirement savings bill.

“I travel a lot just personally, as well as, now, professionally. It’s always better when you get to understand the people and the landscape, that you get to see what it is that you’re thinking about,” she says.

Houlahan, who has visited Poland and Ukraine to better understand her family history, had just returned from a work trip as part of a bipartisan Congressional delegation to Afghanistan, Jordan, Syria, and Turkey. She landed back in the U.S. the day after President Trump’s phone call with Turkish President Erdogan, agreeing to withdraw U.S. troops from northeastern Syria, “effectively abandoning our Kurdish partners and undermining our national security,” she says.

“The news of what we did on October 6th and 7th has real impact when you’ve actually been there, and you can see, visually know what the border looks like. You can really visually understand what it means when you’re talking about this group versus that group,” she says. “I think that’s what’s such a beautiful gift that Congress gets, which is this ability to actually see in the classroom of the world that they get to travel in. I’m very grateful for that trip.”

After an aide peeked in with a five-minute warning, Houlahan was asked what she hopes her primary achievement will be when she looks back five or 10 years down the road.

“I just hope that I’ve been part of a team of people, who come forward to give us a sense of stability, a sense of community and decency, that I think is really lacking right now,” she adds. “I’m not looking for one signature piece.” If she had to cite one signature piece, though, it would come from her Israel trip: a national kind of service.