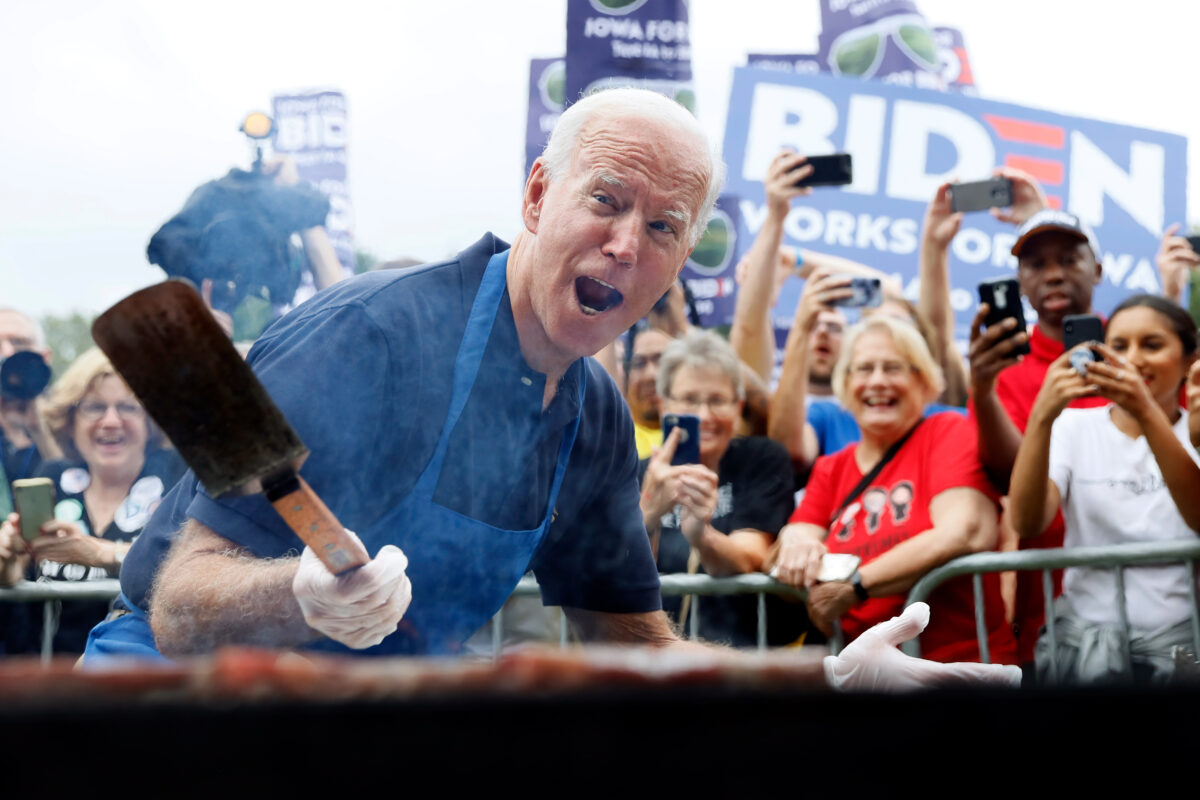 The descendant of an annual fundraiser held by former Senator Tom Harkin in Indianola, Iowa, has transmuted into a presidential cattle call of gargantuan proportions. Candidates parade into the venue with crowds of supporters and marching bands (or, in the case of former Secretary of Housing and Urban Development Julian Castro, a mariachi band). They take turns grilling steak and pouring beer for television cameras before taking the stage to give 10-minute sales pitches to a crowd of thousands.

For big-name candidates, Saturday’s event was yet another photo opportunity. Perhaps the most visible presence there was South Bend Mayor Pete Buttigieg, who bought 1,500 tickets to the event. Many ticketholders marched in with him, wearing bright yellow t-shirts as a marching band blared a version of the Rolling Stones’ “Paint It Black.” For candidates struggling in the polls, the event was an extended retail stop. Congresswoman Tulsi Gabbard (D-HI) and Senator Michael Bennet (D-CO) could be spotted working the crowd long after their speeches, having one-on-one conversations with attendees. In contrast, standing on a wide plank of plywood covering the muddy ground, Elizabeth Warren had another of her signature “selfie lines,” which lasted hours after her speech. Her campaign said that 1,050 people waited to take a photo with the Massachusetts Democrat —a significant fraction of the 12,000 attendees, many of whom had come to support other candidates.

Before and during the speeches, attendees lined up for slabs of steak, potato salad and baked beans, which they consumed on long tables lined with bottles of steak sauce in a massive tent. Food was washed down with free lemonade or iced tea, or with a $5 plastic cup of local beer. Attendees then moved to stand or sit in lawn chairs and watch candidate after candidate take their turn on stage in 10-minute increments. Most speakers kept their remarks within the limits, though former Vice President Joe Biden and former Congressman Joe Sestak (D-PA) had to be played offstage.

Perhaps the highest stakes of the day were for Cory Booker. The New Jersey senator’s campaign manager, Addisu Demissie, released a memo earlier that day stating that the campaign needed to raise $1.7 million by the end of September in order to mount a viable campaign to win the nomination.

Covered in sweat, Booker spoke to reporters after he made a renewed pitch for support to save his lagging campaign. Booker emphasized that he had built “one of the strongest campaigns to win the nomination,” noting the investment his team had made on the ground in states with early primaries. The New Jersey senator was endorsed by more Iowa state legislators than any other candidate and had personnel on the ground in the Hawkeye State during the 2018 midterms.

Booker boasted that “we have built — with a fraction of [the] money of the top four fundraisers — about the strongest campaign in the early states,” but admitted “I can’t stay in this race if I don’t have the resources to deliver a winning campaign.” The New Jersey Democrat told reporters, “I’m not in this as a vanity project and exercise of ego, we’re doing this to win the nomination and defeat Donald Trump… I don’t believe people should stay in this just to stay in this; you either have a trajectory for victory or you do not.” He conceded, “If we don’t raise the $1.7 million, we’re going to have to have a hard conversation.”

Booker didn’t get cheery news from the Iowa poll released on Saturday night. The poll, conducted by Ann Setzer and considered the benchmark in the Hawkeye State, ranked the senator in sixth place with 3%. For the first time, the poll showed Warren in the lead in Iowa with 22%, followed by Biden at 20%, Sanders at 11%, Buttigieg at 9% and Senator Kamala Harris (D-CA) at 6%.