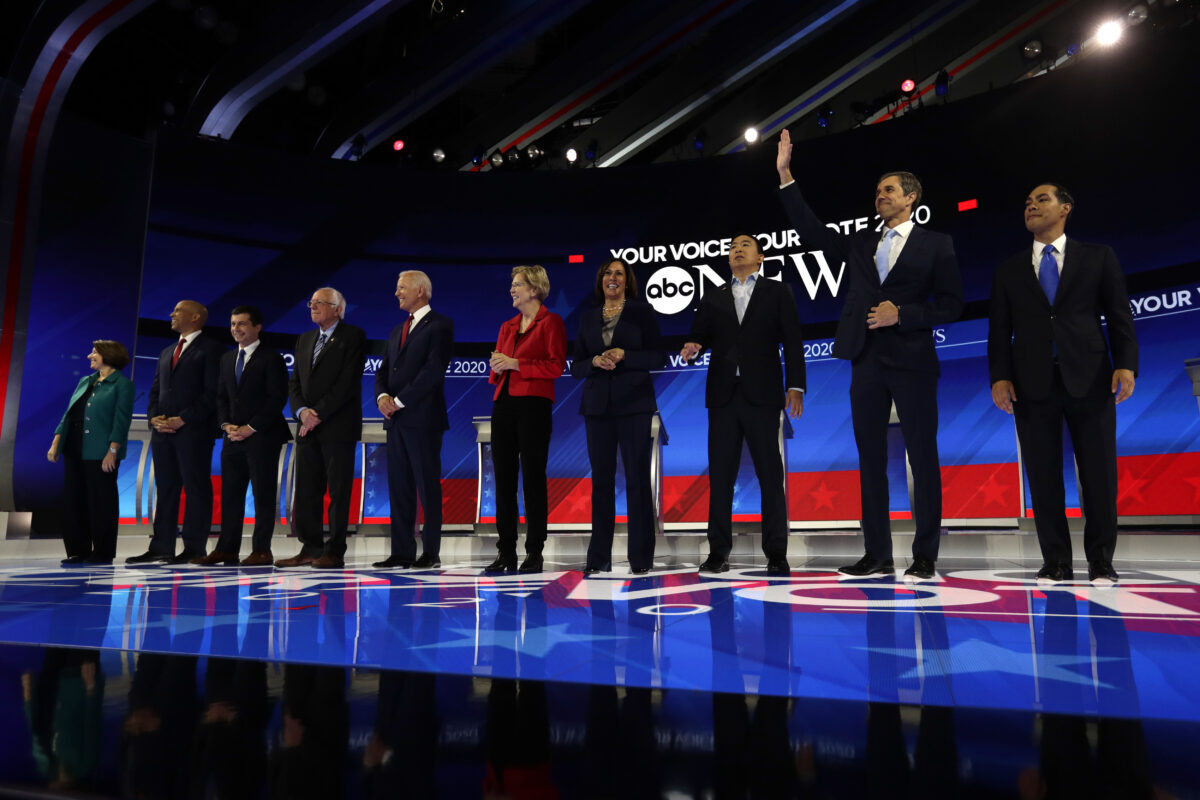 The first one-night Democratic debate of the 2020 presidential primary was a grueling three-hour marathon, as candidates exchanged blows and parried attacks in a race that polls have shown to be largely stagnant.

Taking the stage at Texas Southern University, a historically black university in Houston, candidates vied for the limelight through bold policy stances and hackneyed dad jokes.

For the first time, septuagenarian frontrunner Joe Biden took direct questions about his age while alternating rambling answers about foreign policy with heartfelt remembrance of his wife and daughter, who were killed in a 1972 car accident.

In an exchange about healthcare early in the debate, former HUD Secretary Julian Castro accused Biden of having memory loss. “Are you forgetting what you said two minutes ago? Are you forgetting already what you said just two minutes ago” asked Castro, who insisted that the former vice president was contradicting himself over a buy-in for his plan to expand access to Medicare. Castro’s comments marked a full-frontal attack on one of the leading figures in the modern Democratic Party.

Anita Dunn, a senior advisor to the Biden campaign, told JI that Castro had taken a “cheap shot” at the former vice president. Dunn suggested that attacking Biden would not be a successful stratagem. “I think Secretary Castro, who likes to talk about learning from history, clearly didn’t learn from the first two debates that taking personal cheap shots at Vice President Biden doesn’t work out that well for candidate who throws that shot.”

However, Congressman Joaquin Castro (D-TX), the former cabinet secretary’s brother, insisted it was not intended that way: “No, he wasn’t trying to be disrespectful.” In response to a follow-up question from Jewish Insider about Dunn’s comments, Congressman Castro said, “Obviously, it’s sad to hear that they would take it that way. Look, the truth is that if anybody else had done that on stage Julian would have pointed out the same thing.”

After the debate, New Jersey Democrat Cory Booker amplified the concerns about Biden’s age in an interview with CNN. “I think we are at a tough point right now because there’s a lot of people who are concerned about Joe Biden’s ability to carry the ball across the end line without fumbling,” the senator said. “And I think that Castro had some really legitimate concerns about, can he be someone in a long grueling campaign who can get the ball over the line?”

Other candidates tried to distinguish themselves through bold rhetoric. Beto O’Rourke proudly insisted that he would confiscate assault weapons. “Hell yes, we are going to take your AR-15, your AK-47,” proclaimed the former Texas congressman, who has refocused his campaign on gun control in the aftermath of the recent mass shooting in his hometown of El Paso.

Meanwhile, Booker continued to play the “happy warrior.” Although the senator performed well in the first two debates, he has yet to break out of the pack and has remained mired behind the top five candidates in the field. On stage Thursday, he cracked jokes about his bald head and vegan diet. Booker also spoke passionately about the struggles of his neighborhood in inner city Newark and about the racial bias in the criminal justice system.

On the party’s left, Senator Elizabeth Warren (D-MA) continued to follow her playbook from past debates, hitting her marks on topics tailored to her strength and otherwise avoiding the fray. Vermont Senator Bernie Sanders struck familiar notes on his push for universal healthcare and long-standing opposition to a hawkish foreign policy.

Pete Buttigieg, the mayor of South Bend, Indiana, talked in personal terms about coming out just a few years ago. Buttigieg, the first openly LGBTQ candidate for president, addressed his experience returning from his deployment in Afghanistan and deciding to come out despite anxiety that it was “an election year in my socially conservative community.” Lis Smith, a top aide to his campaign, hailed it as “powerful” and “the moment of the debate.”

The debate also featured an extended discussion of foreign policy. Sanders made his pointed criticism of the Maduro regime in Venezuela, describing the country’s leader as “a vicious tyrant.” Candidates also addressed the U.S. presence in Afghanistan. Biden, a longtime advocate of a tripartite division of Iraq along ethnic lines, insisted that Afghanistan was “three countries” during the debate, saying “you can’t put it together.”

When asked for clarity by Jewish Insider, Dunn said it was a reference to “the challenge of it being a unified country which I think as he said in his answer has been a challenge over centuries.” The campaign’s communications director, Kate Bedingfield, then insisted, “I think we answered [the] question” on a follow-up about what those three countries were.

The next debate will be held in October in Ohio. It will feature at least one more candidate, as billionaire Tom Steyer has already reached the necessary donor and polling thresholds for participation.