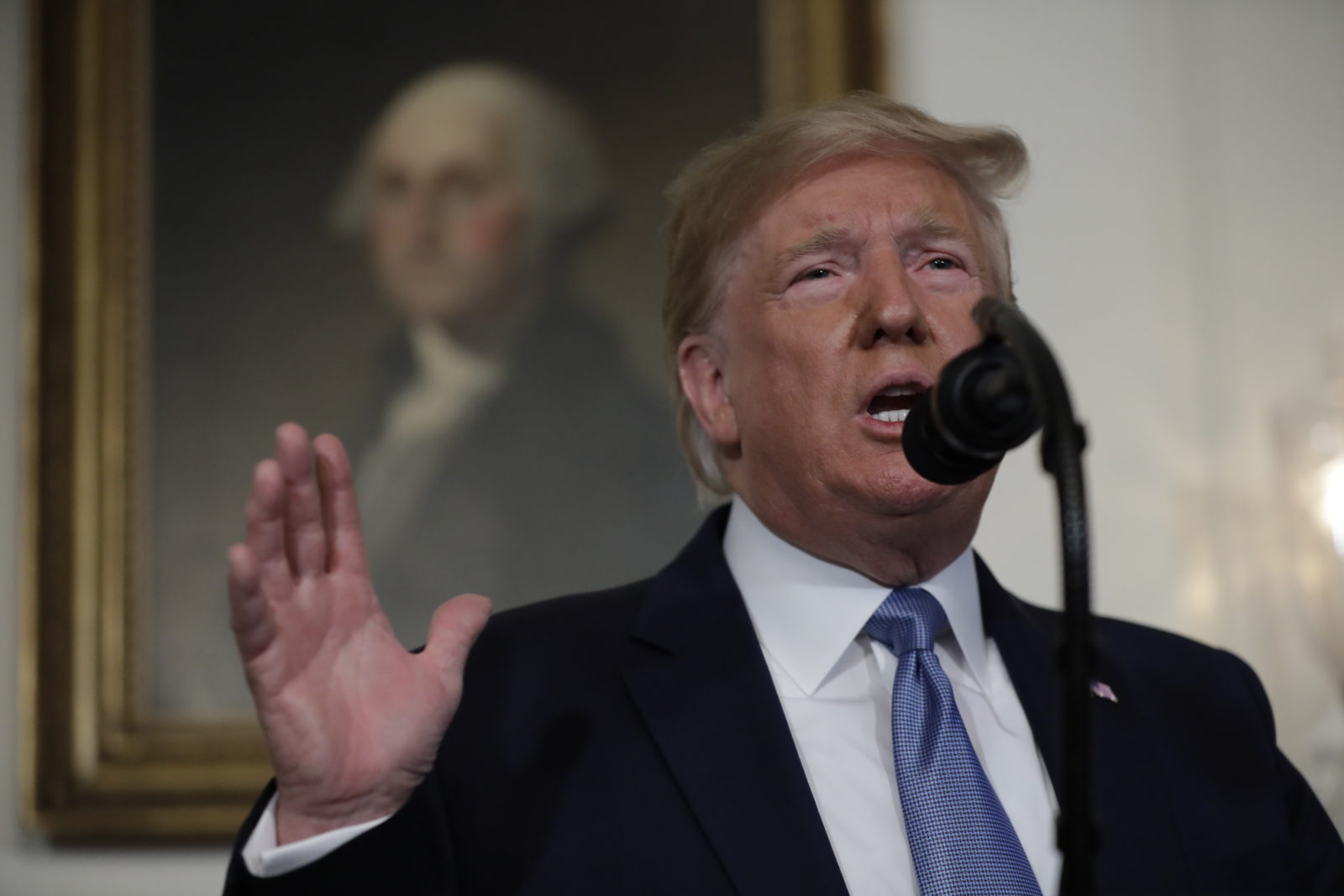 On Tuesday, President Donald Trump dropped another bombastic claim in his campaign to paint Reps. Rashida Tlaib (D-MI) and Ilhan Omar (D-MN) as the face of the Democratic Party. “I think Jewish people that vote for a Democrat — I think it shows either a total lack of knowledge or great disloyalty,” Trump told reporters during a photo spray with Romanian President Klaus Iohannis in the Oval Office.

The president said, “I can’t even believe that we’re having this conversation. Five years ago, the concept of even talking about this, even three years ago, of cutting off aid to Israel because of two people that hate Israel and hate Jewish people. I can’t believe we’re even having this conversation. Where has the Democratic Party gone? Where have they gone where they’re defending these two people over the state of Israel?”

On Twitter, Trump also mocked Tlaib over her emotional performance on Monday in response to Israel’s decision to bar the lawmaker from entering the country last week. “Sorry, I don’t buy Rep. Tlaib’s tears,” Trump wrote on Twitter. “I have watched her violence, craziness and, most importantly, WORDS, for far too long. Now tears? She hates Israel and all Jewish people. She is an antisemite.” The president repeated his assertion that Tlaib and “her 3 friends are the new face of the Democrat Party. Live with it!”

Jewish Democrats rushed to condemn Trump’s statement. Halie Soifer, executive director of Jewish Democratic Council of America, said in a statement, “This is yet another example of Donald Trump continuing to weaponize and politicize anti-Semitism.” The president’s “appalling” statement reveals that “his professed support for Israel is based on personal political calculation, not principled commitment,” the Democratic Majority for Israel said on Twitter. Aaron Keyak, former National Jewish Democratic Council head, told JI, “Just because President Trump is deeply unpopular in our community is no reason to slander us with echoes of some of the most insidious attacks against our people.”

The Republican Jewish Coalition (RJC) defended the president. “It shows a great deal of disloyalty to oneself to defend a party that protects/emboldens people that hate you for your religion,” the RJC tweeted.

According to Pew Research Center, 79% of Jewish voters supported Democratic candidates in the 2018 midterm elections.

“Actual LOL,” Ambassador Daniel Shapiro tells JI. “There are lots of uncertainties in American politics. How the Jewish vote will break in the next presidential election is not one of them. Faced with a Democratic candidate who reflects their values and supports a strong, secure, Jewish, democratic Israel and a two-state solution with Palestinians versus Donald Trump’s cruel, divisive politics… and his approach that threatens to help lead Israel into becoming a binational state, you can mark 75 percent as the floor for the Jewish vote for Democrats in 2020. Eighty percent is not out of the question.”

Ann Lewis, who served as White House director of communications for President Bill Clinton and as a senior adviser to Hillary Clinton, said in an email to JI that Trump “has now attacked the more than 70 percent of American Jews who dare to disagree with him politically by using one of the most dangerous, deadly accusations Jews have faced over the years.”

“False charges of disloyalty over the centuries have led to Jews being murdered, jailed and tortured,” Lewis explained. “This is the kind of cruel, careless rhetoric that inflames anti-Jewish passions and leads to violence.”

Matt Brooks, RJC’s executive director, tells JI: “Of course the president was not trafficking in dual loyalty and antisemitism. The reality is that what the president gave voice to is a question that I get all the time in all of my speeches, in large part from folks who aren’t Jewish and want to understand how people in the Jewish community — given the issues that are important to them — can support the policies of individuals like Omar and Tlaib. You know, it’s a question that has a lot of people scratching their heads.”

Matt Nosanchuk, former Obama Jewish liaison, emails JI: “We have a President with the chutzpah to attack American Jews by trotting out the antisemitic trope of disloyalty. He either ignores or fails to recognize the values and priorities of the overwhelming majority of American Jews, who have been turning out by the thousands to protest the Trump administration’s inhumane immigration policies and are outraged by the President’s divisive and antidemocratic attacks on two Members of Congress notwithstanding strong policy disagreements with them over Israel. Only a president whose Rasputin in Stephen Miller and political doppelgänger is Benjamin Netanyahu would think that he can resort to craven demagoguery in a futile and transparent effort to bolster his standing within the American Jewish community.”

David Halperin, executive director of the Israel Policy Forum: “Something is very wrong  — the president claims Jews who vote for one party over another are disloyal and it feels like just another Tuesday in the United States of America. It is abhorrent and dangerous — but this isn’t the first time in the past week he has said something abhorrent and dangerous. It should be resoundingly condemned by Democrats and Republicans alike.”

Abe Foxman, former ADL national director: “This is an ironic moment in Jewish history: ‘And there comes a president upon the land who knew ‘Joseph’ and proclaimed himself to be the best friend of Israel and the Jewish people.’ I want to believe he believes that he is. And yet, this same president finds it difficult to condemn neo-Nazis in Charlottesville or white supremacists in Oregon. And now in an effort to publicly proclaim his pro-Israel views, he embraces and gives credibility to the most prevalent and pernicious antisemitic canard. I don’t know if he doesn’t understand it, or does understand but doesn’t care. And I don’t know what is worse. This canard that the Jewish people aren’t loyal and cannot be trusted is as old as history. When we did research at the ADL, many years ago, we found that approximately 30 percent of Americans believed it was the most accepted antisemitic stereotypic canard. The president is, in reality, giving life to this antisemitic belief from the most important bully pulpit in the world. We need to find a way to help him undo this.”

The American Jewish Committee condemned the president’s comments. AJC CEO David Harris said the president’s comments are “shockingly divisive and unbecoming of the occupant of the highest elected office. American Jews – like all Americans – have a range of political views and policy priorities. His assessment of their knowledge or ‘loyalty,’ based on their party preference, is inappropriate, unwelcome, and downright dangerous.”

Anti-Defamation League CEO Jonathan Greenblatt tweeted, “It’s unclear who POTUS is claiming Jews would be ‘disloyal’ to, but charges of disloyalty have long been used to attack Jews. As we’ve said before, it’s possible to engage in the democratic process without these claims. It’s long overdue to stop using Jews as a political football.”

Logan Bayroff, J Street’s director of communications, said in a statement: “It is no surprise that the president’s racist, disingenuous attacks on progressive women of color in Congress have now transitioned into smears against Jews.”

Israel Policy Forum said on Twitter that Trump’s comments “are appalling but unsurprising given his record of inappropriate remarks as well as his efforts to leverage Israel as a wedge issue in U.S. politics.”

The Zioness Movement released a statement saying that the president “casually employed several of the most explicitly antisemitic conspiracy theories in the same breath. This is the kind of bigotry that has sparked humanity’s worst impulses and greatest catastrophes.”

The Bend the Arc Jewish activist group wrote that Trump’s statement is “textbook antisemitism and should be called out as such, without hesitation.”

Earlier on Tuesday, in an interview on Fox News’ “America’s Newsroom,” White House deputy press secretary Hogan Gidley said that Trump reserves the right to escalate his attacks against the Democratic congresswomen because he “is standing up for the American people, he’s standing up for our ally in Israel, but these two women are clearly against the existence even of Israel.”

Gidley went on to slam the “disingenuous” media for refusing “to call out antisemitism for what it is… The Democrats are encouraging this behavior and the media are allowing it to happen.”