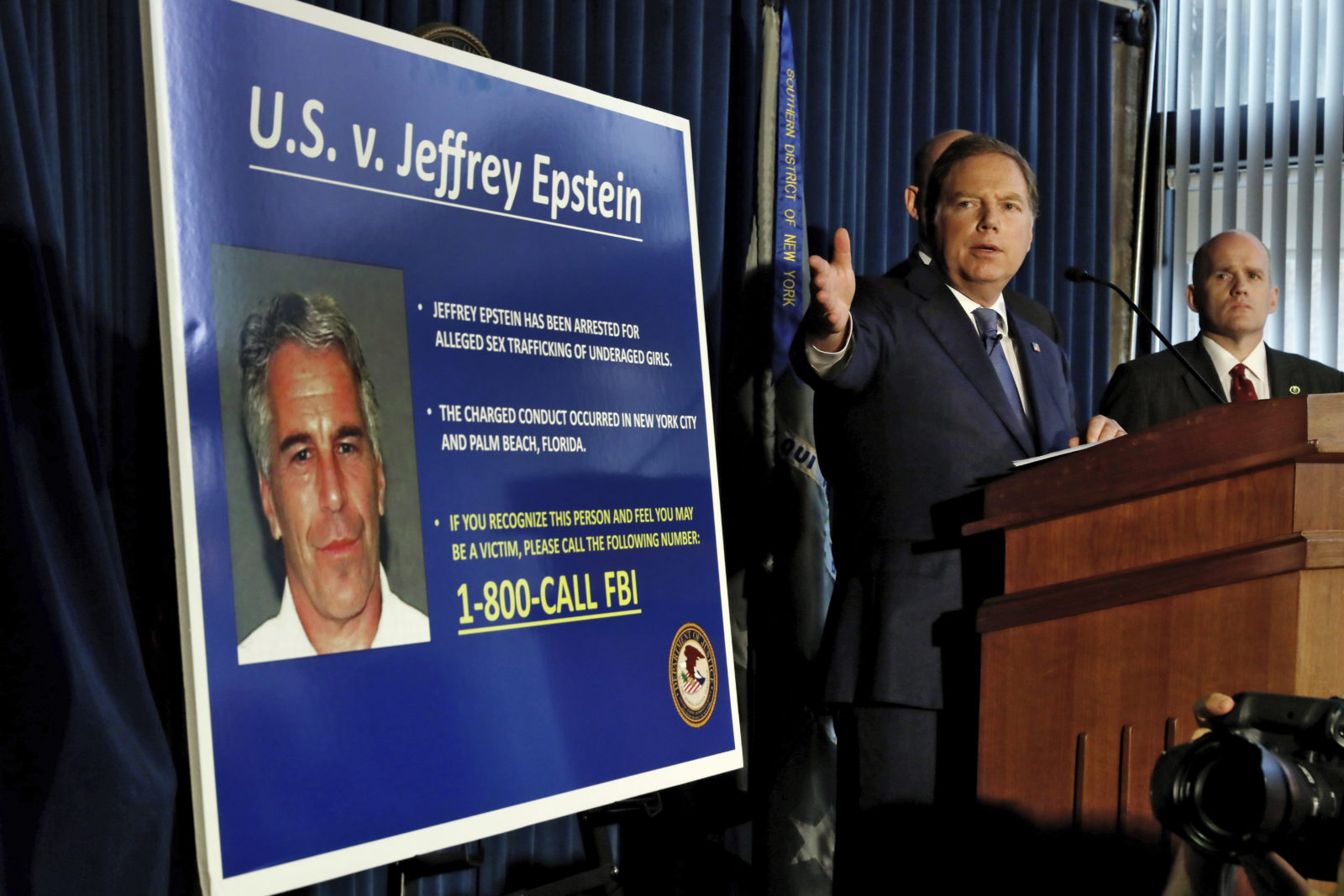 The financier and convicted sex offender donated to yeshivas, Hillels, Jewish foundations and even the Friends of the IDF.

Extensive tax filings compiled by The Miami Herald and released this week show a pattern of giving by accused sex trafficker and convicted sex offender Jeffrey Epstein over a period of 20 years. The hundreds of donations, dating from 1998 to 2017, detail charitable giving from three of Epstein’s foundations to more than a dozen Jewish nonprofits and educational institutions.

From $250 to a kollel study program and charity in Jerusalem to $500,000 to an Orthodox Jewish school in Manhattan, Epstein’s three non-profits — Epstein Interest, The C.O.U.Q. Foundation and Gratitude American Ltd. — gave heavily to Jewish organizations of all stripes. It is likely that Epstein made other charitable contributions over the years that have yet to be discovered in the public IRS documents currently available.

Epstein was first accused of sexual misconduct in 2005, indicted in 2006 and pled guilty in a secret plea deal in 2008 and served 13 months in prison. He was released in 2009 and forced to register as a sex offender in both Florida and New York. Earlier this month he was arrested on federal charges for sex trafficking of minors.

Epstein’s most recent donation to a Jewish organization was listed as $50,000 on December 31, 2017, to the UJA-Federation in New York. The single largest donation from any of the foundations, to any recipient, was $500,000 to the Ramaz School in February 2008.

Jewish Insider has compiled a list of Epstein’s publicly documented donations to Jewish institutions, and, when relevant, asked them to comment on the context of the charitable gift. They are presented here in reverse chronological order.

Epstein’s foundation, Gratitude America Ltd., gave a $50,000 donation to the UJA-Federation of New York in December 2017. The UJA-Fed did not respond to a request for comment from JI on the context of the donation. The Forward reported earlier this month that the Federation did not answer its multiple calls and emails on the same topic.

The UJA-Fed is one of the largest Jewish non-profits in the world, with a turnover of more than $200 million a year, distributed to dozens of charitable organizations in the U.S., Israel and around the world.

Epstein’s foundation, C.O.U.Q. Foundation, contributed $50,000 in February 2012 to the YIVO Institute for Jewish Research. YIVO did not respond to a request for comment from JI about the nature of the donation. The Institute, based in New York City, is a library, archive and research center of Jewish history and culture.

In February 2009, the C.O.U.Q. Foundation donated $250 to Chibas Yerushalayim Reb Meyer. It is the smallest individual donation listed from any of Epstein’s charities in the 20-year period documented. “Kolel Chibas Jerusalem Rabbi Meyer Baal Haness” describes itself as “one of the oldest and holiest charities in the world,” and says it distributed more than $7 million annually “to thousands of needy in [the] Holy Land.”

The National Council of Jewish Women was one of the most frequent organizations that received funds from Epstein’s foundations. The first donation, through Epstein’s C.O.U.Q. Foundation, was a $5,000 gift made on October 20, 2005, the very same day that Florida police arrived with a search warrant at his home. The second donation of $5,000 was made on October 5, 2006. The third donation, also for $5,000, was made on February 29, 2008, several months before Epstein plead guilty and entered prison. The NCJW did not respond to a request for comment on the donations.

A line on the 2008 tax return for Epstein’s C.O.U.Q. Foundation says it donated $50,000 to the Aspen Jewish Congregation on February 29, 2008. The synagogue by that name, a Reform congregation, denied it was the recipient of such a donation. Searches of other tax returns around the same time indicate that the donation may have been directed to the UJA of Aspen Valley. A representative of Jewish Colorado, which is now the umbrella organization of the Aspen UJA, told JI that its records do not go back to 2008, since it only took over the UJA’s finances in 2015.

Les Wexner, Epstein’s closest association for many years and the Jewish billionaire owner of L Brands, has a residence in Aspen.

On February 29, 2008, the C.O.U.Q. Foundation donated $500,000 to the Ramaz School, the single largest donation for any of Epstein’s three charities for more than 20 years. Ramaz is a well-respected Orthodox Jewish day school in Manhattan. In an email sent out this week, the school admitted to receiving the gift.

“At the time, the source of the foundation’s funding was not made known to the School,” Ramaz chairman Philip Wilner and head of school Jonathan Cannon wrote in the email, according to JTA. “However, we very recently learned that the foundation was associated with Jeffrey Epstein, whose unconscionable behavior is widely known.” Ramaz said most of the donation was spent to establish an educational program, and that the revelation would cause it to more carefully review its acceptance of gifts.

The C.O.U.Q. Foundation listed a donation of $100,000 in August 2006 to the “Zvi Tzedakah Fund,” which was most likely a typo for the Ziv Tzedakah Fund, a now-defunct charitable organization founded by Danny Siegel that operated from 1981 to 2008. Siegel told Jewish Insider that he was unaware of any donation of that nature linked to Epstein.

“In all those years there were only two 6-figure donations,” Siegel wrote, stating that one was in Canada and one “was donated by a woman, though I did not see the actual check.” Siegel promised to look into the organization’s records further for more clarity.

In July 2005, Epstein’s C.O.U.Q. Foundation donated $50,000 to the Hillel Foundation, the umbrella group for the organization dedicated to Jewish life on campus.

In May 2003, Epstein — who never attended Harvard or attained a college degree — donated $50,000 to the Harvard Hillel through his foundation, Epstein Interests. According to a 2003 article in the Harvard Crimson, “Epstein and Wexner… teamed up in the early 1990s to fund the construction of Harvard-Radcliffe Hillel’s new building.”

In June 2005, Epstein’s C.O.U.Q. Foundation donated $15,000 to the Jewish National Fund, the quasi-governmental agency best known for planting trees around Israel, and which is the second-largest landowner in Israel.

The Epstein Interests nonprofit donated $10,000 to Seeds of Peace, a nonprofit founded to bring together Israeli and Palestinian teens at a summer camp in Maine.

In May 2003, Epstein Interests donated $25,000 to the American Jewish Committee, a Jewish advocacy group.

In May 2003, the C.O.U.Q. Foundation donated $100,000 to the Columbus Jewish Foundation. Wexner has lived in the Columbus, Ohio area for most of his life.

On two separate occasions, the Epstein Interests nonprofit made donations to the Yeshiva of Spring Valley. On both May 31, 2002 and August 3, 2000, the foundation donated $20,000 to the yeshiva. The school is an Orthodox, separate-sex yeshiva day school in the Monsey, New York area.

Epstein Interests donated $25,000 to the Gift of Life bone marrow foundation in 2002, a Jewish-founded organization based in Florida.

Tax filings for Epstein Interests list two donations to an organization named as Jewish Family Children Services. Both donations, in April 1999 and June 1998, were for $15,000.

In October 1998, Epstein Interests donated $25,000 to the American Friends of Hebrew University.

Tax filings for Epstein Interests indicated a $900 donation in October 1998 to an organization listed as Center for Holocaust Studies.