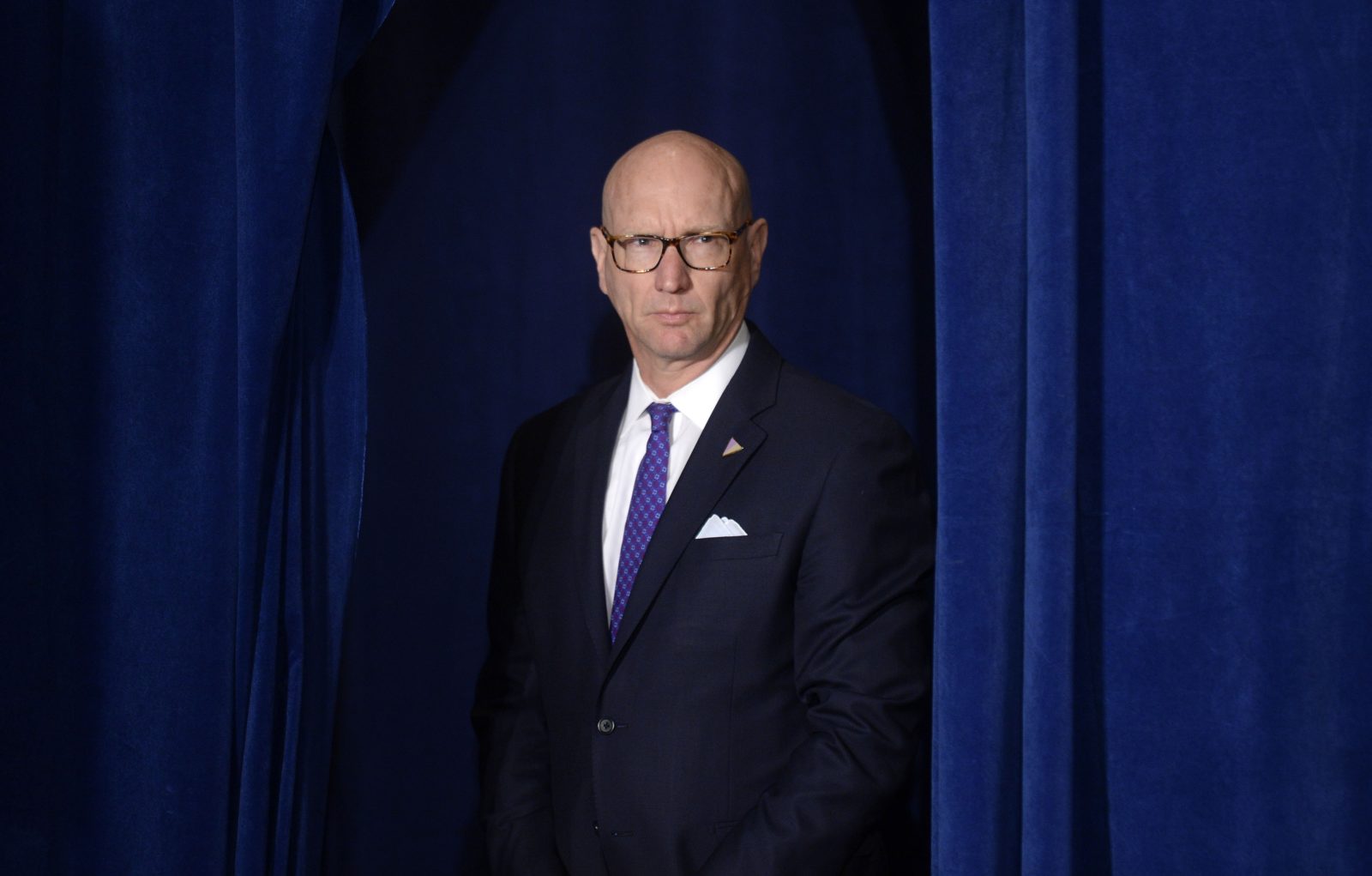 Ever since Trump announced his White House bid last June, Michael Glassner has been serving as his campaign’s national political director. In part, he is credited with landing the coveted Sarah Palin endorsement ahead of the Iowa Caucus last month.

Glassner’s political journey began as a 20-year-old college student from Kansas when he served as Bob Dole’s traveling aide in the 1988 presidential campaign. “I became the right-hand man for the Senate Majority Leader and a presidential candidate,” Glassner related in an interview with Jewish Insider. “It was a tremendous education in politics, and that was the beginning of what became a 15-year relationship as I worked for Senator Dole in a number of capacities.”

Upon moving to New Jersey in the late nineties, Glassner served as a senior advisor to Lewis Eisenberg, the then-Chairman of the Port Authority of New York & New Jersey and a prominent Republican Jewish leader. He worked out of the Port Authority’s World Trade Center office but left just before 9/11 to join IDT Corp in Newark. Glassner credits his former boss, IDT founder Howard Jonas, whom he referred to as “a strong Zionist and an AIPAC guy,” with encouraging him to become more active in pro-Israel politics. Intermittently between 2000 to 2008, Glassner would take time off to return to the campaign trail: running George W. Bush’s general election campaign in Iowa, fundraising for Bush’s ’04 re-election effort, and in ’08, where he managed Sarah Palin’s vice presidential campaign.

“My interest in pro-Israel politics had grown exponentially,” Glassner recalled. “Particularly since 9-11, which represented a real credible threat to all Americans and in particular as a Jew, I felt very strongly about the threat of radical Islam and so I became more and more involved with AIPAC.” In 2014, Glassner officially joined AIPAC as their southwest regional political director where, according to his LinkedIn profile, he managed AIPAC’s legislative mobilizations, conducted briefings with candidates, and spoke at political events throughout the region.

In July 2015, the phone rang. Donald Trump, a real estate magnate, decided to run an unconventional campaign for president. Keeping senior hires to the minimum, the Trump campaign offered Glassner to join and serve as its national political director. “The Trump campaign came to me for a lot of reasons,” Glassner told Jewish Insider regarding the recruitment process. “I think they were looking for somebody that had experience in presidential politics and who was already in the area, and I live in New Jersey.” And, of course, there was the Sarah Palin factor. “The Palin connection was also very attractive to them because, although Palin and McCain’s campaign was not successful, I think that was sort of a marker for the anti-establishment movement… I think that that helped my credentials in this arena because I’ve shown that I was willing to take on the status quo, willing to buck the establishment, and I think that is what this campaign is all about.”

Glassner told Jewish Insider he didn’t have to use his influence to convince Palin to endorse Trump but that his prior relationship certainly helped. “They had established a relationship sometime back. And I think that her inclination is very much aligned with his,” he said. “Mr. Trump did the persuading. I think it was helpful that she had a friend here in the campaign, somebody she knew, and I demonstrated my loyalty to her, which I think helped. But, ultimately, it was everything that he is saying about the country is in line with whatever she has been saying. I think that’s a natural alliance in my view.”

Asked to describe the transition from AIPAC to Trump, Glassner said, “This campaign is much different than any campaign I’ve been on in a lot of ways. But probably, primarily because the culture has a more corporate and a business-like approach than other campaigns. Mr. Trump is self-funding his campaign, and he’s been very effective throughout his life in maximizing his investments. And we are approaching this campaign in the same way, and you’ve seen the results of that. If you look at the results in New Hampshire, the amount of money spent per vote, I believe Mr. Trump was by far the most efficient.”

The staff in Trump’s main election headquarters, based in Trump Tower on 5th Avenue in Manhattan, consists of 10-12 people, according to Glassner. The rest are out on the field in some 20 states, including all of the Super Tuesday primary states. Outlining this centralized approach, which is in stark contrast to Hillary Clinton’s campaign, Glassner said: “Our state directors in all of the states have a lot of autonomy. Of course, we have guidelines and expectations but in large part, they have the ability to build and execute their own strategies.”

He added: “The other two things that makes us different is that 1. Mr. Trump as a candidate has a dominance of the media that is unprecedented. Typical candidates have a giant communications staff because that’s what is required. In this campaign, we have two people. There’s one communications director that travels with him [Hope Hicks] and then we have an assistant to her here in the HQ. The primary reason for that is that he is the chief communicator and his dominance of social media, and traditional media, is such that you don’t need a hundred people doing that. He can do it himself. 2. The lack of a fundraising mechanism. Since he is self-funding his campaign, there is no giant fundraising staff either that is eating up office space and overhead. Just those two pieces alone of a traditional campaign makes this one far more efficient.”

In stump speeches on the campaign trail, Trump regularly notes how he is self-funding his campaign and claims that gives him the ability to speak his mind and offer policy proposals without being beholden to outside interests and donors. In December, Trump caused a stir with Republican Jewish donors when he addressed the Republican Jewish Coalition Presidential Forum in Washington. “You are not going to support me even though you know I am the best thing that could happen to Israel. I know why you are not going to support me. You’re not going to support me because I don’t want your money,” he told a full auditorium of donors. “You want to control your own politicians.” Asked if Trump overcompensated in his desire to not pander to the RJC crowd, Glassner responded, “I would never, ever suggest that I am aware of his thought process going into this speech, so I can’t comment on that. I think his remarks speak for themselves. He’s a very effective communicator, so I am not going to speculate as to his motives. I think what he said is what he thinks,” he told Jewish Insider.

As Trump continues to surprise the political class and voters with comments that are out of sync with traditional Republican talking points on Israel, Glassner promised that Trump would soon present a detailed plan as it relates to U.S. foreign aid to Israel and the U.S.-Israel relationship. “He has said, in general, that he recognizes that Israel is our top ally and he will do everything in his power to protect Israel. He said that, and I think he will continue to say that publicly,” he stressed. “As to specifics of his policies, those will become clear over the time. But I think he has said consistently throughout his career, and in particular throughout this campaign, that he understands the threats that are presented to Israel by its neighbors and by Iran. I think he’s been very clear about that.”

Glassner pointed to Trump’s robust statements against the Iran deal as a clear example of where he stands on Israel. “One of the things that Mr. Trump talks about, almost every single speech he gives, is how bad the Iran deal is,” Glassner maintained. “And he uses that as an example for a lot of reasons. One is, I believe it encourages Iran’s bad intentions toward Israel. Secondly, it’s an example of what bad deal making and poor negotiations can result in. I don’t think it directly speaks towards his policy on Israel but it makes it clear that he recognizes that Israel is our most important ally in the region and through poor deal making the current administration has endangered that ally and that is unacceptable and has, in essence, said that many times.”

“I don’t think there can be any question about his steadfast support for Israel,” Glassner declared just hours before Trump suggested he would be “neutral” on the Israeli-Palestinian conflict. “I would not be working here if I didn’t believe that that was held by the candidate himself. It’s very important to me, very important to him and the country.”

In December, Trump announced he would be traveling to Israel to meet with Prime Minister Benjamin Netanyahu, but he canceled it after Netanyahu rejected his plan of banning Muslims entering the United States. To date, Trump has no plans of rescheduling a trip to Israel as a candidate or as the GOP nominee, says Glassner. “He would go back as president. No discussion beyond that, not currently,” he said. “I mean, it’s hard, as you can guess, now that the primary season is in full run, it’s virtually impossible to do anything but run in the primary states. Leaving the country is probably end life in my view at this time.”

Trump is also not planning to attend any upcoming Jewish events, though that could change. “Mr. Trump appears almost exclusively at our own events because he has the capability of driving out these giant crowds which nobody else in this campaign really enjoys and can control the event, control the venue, control the time, location, everything,” Glassner explained. “We primarily just do our own events but I will certainly encourage that if the right opportunity comes up for him to speak directly to the community. That may be more relevant in the states that have a larger Jewish community — like Florida, Illinois, and ultimately California and New York later on the calendar.”

We asked Glassner if he anticipates more endorsements from leaders in the Jewish community.

“Yeah, anybody who wants to is welcome to get on board the train,” he said. “Endorsements, in general, are important but they are not a central part of our strategy because we really have the support of the grassroots so it’s probably less important to us than to others that we have other prominent people endorsing him although many have. We welcome endorsements from all walks of life and I think you’ll see more of those come across as the campaign continues.”