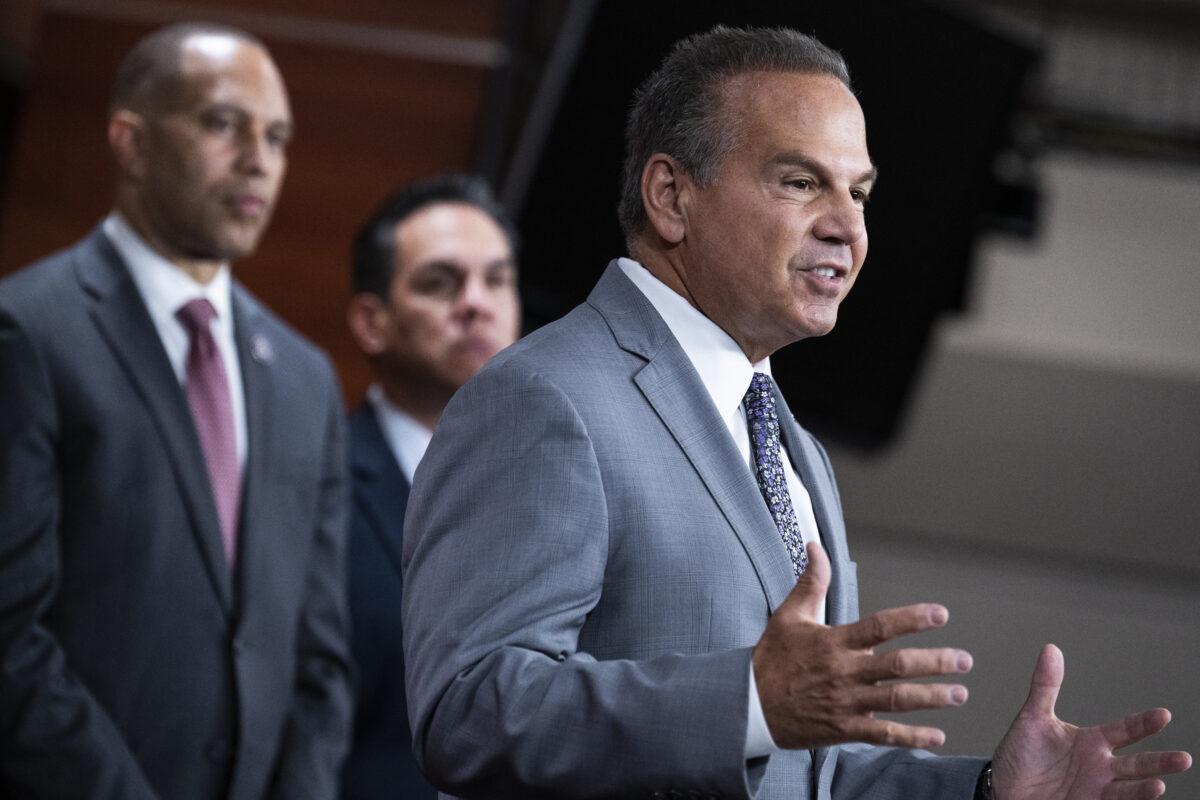 Rep. David Cicilline (D-RI), conducts a news news conference in the Capitol Visitor Center after a meeting of the House Democratic Caucus on Tuesday, July 19, 2022.

Rep. David Cicilline (D-RI), a progressive Jewish Democrat, was chosen by Democrats on the House Foreign Affairs Committee on Thursday to lead the committee’s Middle East, North Africa and Global Counterterrorism subcommittee, replacing Rep. Ted Deutch (D-FL), who is leaving to serve as the head of the American Jewish Committee.

A vice chair of the Congressional Progressive Caucus, Cicilline defeated the more moderate Rep. Brad Schneider (D-IL) in an 18-6 vote. Schneider — an AIPAC member since before his election to Congress — is a close ally of Deutch.

Cicilline, who entered Congress in 2011, previously chaired the Democratic Policy and Communications Committee, a senior position in House Democratic leadership, and was a leader in efforts to impeach former President Donald Trump.

“I have been privileged to sit on the Foreign Affairs Committee since my first days in Congress in 2011, working with my colleagues on a range of issues relevant to the Middle East and North Africa,” Cicilline said in a statement on Thursday. “At a time of instability around the world, including in the Middle East, I believe that it is more important than ever that we work together, as Members of the Committee, to do everything we can to address humanitarian crises, human rights abuses, and political upheaval throughout the region.”

Cicilline was a leader in the effort to block U.S. arms sales to Saudi Arabia and the United Arab Emirates in response to the war in Yemen, and was broadly critical of the Trump administration’s friendly posture toward Saudi Arabia.

In a policy statement on his campaign website, Cicilline describes Israel as “not only vital to her people, but also vital to U.S. interests,” and argues that the U.S. must “strongly and vocally support the right of Israel to defend herself” and “be prepared to provide additional assistance to Israel for her increasing defense needs.”

The Rhode Island native supports a two-state solution — with the U.S. playing a “vigorous role” in facilitating negotiations — as well as Arab-Israeli normalization. He opposes conditioning aid to Israel and the Boycott, Divestment and Sanctions movement targeting Israel.

Cicilline did not respond to a request for comment on which subcommittee gavel he hopes to retain in the new year.

Cicilline, unlike Deutch, was supportive of the 2015 Iran nuclear deal — though he called it “far from perfect” —  and supports reentering the agreement. In 2015, when the original Iran deal was finalized, Cicilline said it should be accompanied by “a fortified and more generous Israel Defense Agreement” to ensure Israel could respond to Iran’s malign activities.

In 2021, Cicilline defended comments by Rep. Ilhan Omar (D-MN) that Jewish Democrats who have accused her of antisemitism “haven’t been partners in justice, they haven’t been equally engaging in seeking justice around the world.”

“There they go again… right wingers in Washington are once again claiming Rep. Ilhan Omar said something she didn’t say, and trying to create a controversy where there is none,” Cicilline said. “It’s pathetic that they are (once again) demonizing a young woman of color to score political points.”

Omar’s comments were condemned by the American Jewish Committee as antisemitic.

“I am living proof that’s not true. I’m a very strong progressive and a very strong supporter of the U.S.-Israel relationship,” Cicilline told Jewish Insider earlier this month.

He also joined with all other Jewish House Democrats earlier this year to condemn comments made by Amnesty International USA Executive Director Paul O’Brien, who said at an event in Washington that American Jews do not want Israel to be a Jewish state.

Cicilline has raised concerns in recent years about shrinking prospects for a two-state solution due to actions by both the Israelis and Palestinians, as well as the Trump administration.

In 2017, Cicilline expressed reservations about the Trump administration’s decision to move the U.S. Embassy in Israel to Jerusalem, while also saying that he does believe Jerusalem is the capital of Israel and that the embassy “should be there.”

“One day, I hope that is the case. What I think this will be viewed as is a unilateral move,” he explained. “You are not going to restart the peace process successfully when you make a move like this at the beginning… This will be resolved in a negotiation when there’s a resolution between the Palestinians and the Israelis.”

During the May 2021 war between Israel and terrorist groups in Gaza, Cicilline joined with other Jewish Democrats to urge the Biden administration to push for an immediate cease-fire and a permanent end to evictions of Palestinians in East Jerusalem.

Cicilline, who hails from a safe Democratic district, was endorsed by AIPAC’s political action committee and J Street.