The basketball standout is in Israel for the launch of a basketball camp bringing together Muslim, Christian and Jewish youth 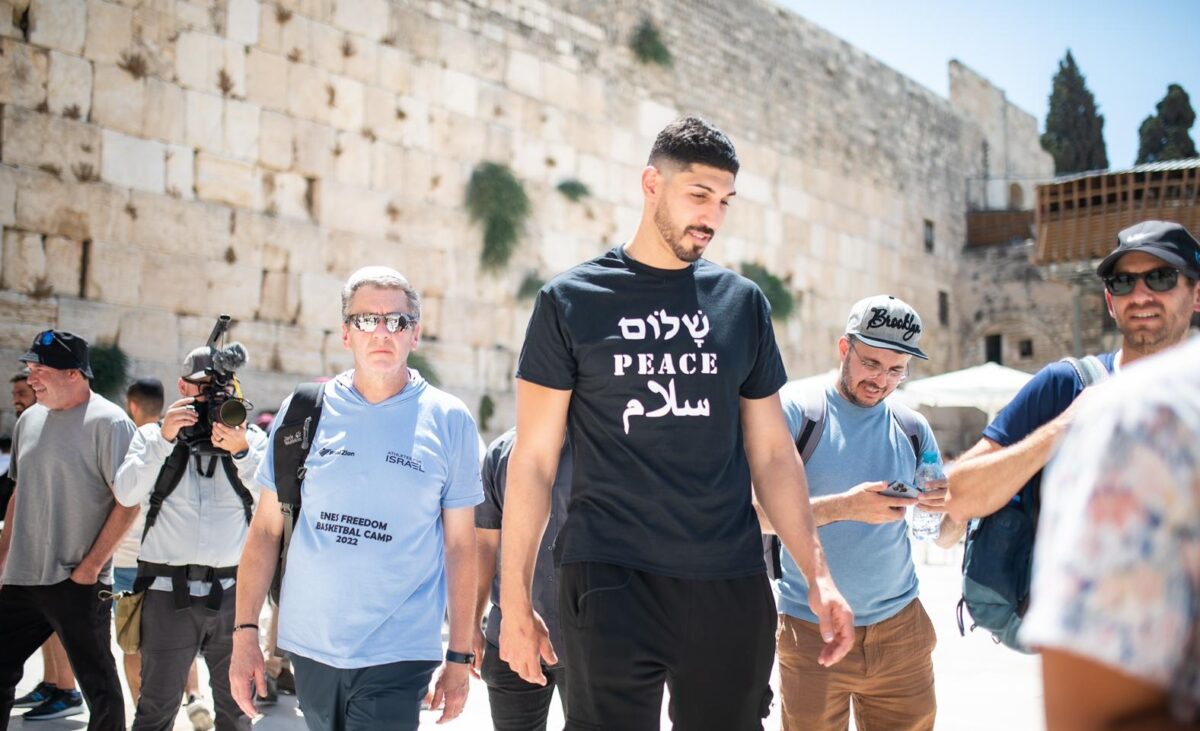 Turkish NBA star and human rights activist Enes Kanter Freedom received a warm welcome in Israel over the weekend, visiting national and holy sites in Jerusalem, as well as hanging out at the city’s most happening hot spot, Mahane Yehuda, and launching his long-dreamed-of basketball camp for Muslim, Jewish and Christian children in the capital.

“It’s hard to describe in words how I feel about being here,” Freedom, who is a practicing Muslim, told Jewish Insider in an interview on Sunday after spending the early morning praying at the Al-Aqsa Mosque, Islam’s third holiest site.

“This is the holiest place I’ve ever been,” continued Freedom, who on Friday visited the Western Wall and the Church of the Holy Sepulchre, the place where Christians believe Jesus was buried. Freedom said the visits to each holy site had been deeply moving and spiritual experiences.

“In every place we went, the people were so warm and friendly to me,” added the 6-foot-10 center, who happily posed for selfies with anyone who asked and shared clips on social media from each religious site calling on people of different faiths to unite and open their hearts to each other.

Freedom, 30, who has played for five NBA teams — the Utah Jazz, Oklahoma City Thunder, New York Knicks, Portland Trailblazers and Boston Celtics — over an 11-year career, has drawn international headlines for vocally criticizing governments including China and Turkey for their alleged human rights abuses. He has also worked in the U.S. to educate the Muslim community about the Holocaust and speaks out frequently for Israel.

Freedom was dropped from the Houston Rockets earlier this year, after a series of actions critical of China for its systematic mistreatment of the Muslim Uyghur population, including an ad in which Freedom referred to the Beijing Olympics as the “Genocide Games.”

“I have to keep speaking out,” said Freedom, who maintains that the NBA is hypocritical for continuing its business dealings with the Chinese government. “The NBA essentially fired me in February and none of the teams have the courage to call me up – that shows how deeply they are involved.”

“They [the NBA] is pushing me out but I can’t just keep on dribbling a basketball when millions of Uyghurs are being murdered,” he told JI, adding that while he still feels too young to retire from the game, he also feels so strongly about these issues that he will never stop speaking out against them.

Raised in Turkey, Freedom moved to the U.S. in 2009, officially becoming an American citizen last November. To celebrate, he added “Freedom,” to his legal name, saying at the time: “America taught me so much. Here, people should feel blessed. You’ve got freedom of speech, freedom of religion, freedom of expression, freedom of press.”

Affiliated with the Gulen movement, led by Muslim cleric Fethullah Gulen, whom the Turkish government accuses of orchestrating a failed coup in 2016, Freedom has also been a relentless critic of Turkish President Recep Tayyip Erdoğan’s government, using his fame to raise awareness to human rights abuses in his former country.

His outspokenness, however, has turned him into persona non grata in Turkey and in 2017, the Turkish government revoked his citizenship. Over the years, he has watched from afar as his family members still in Turkey have lost their jobs, been arrested and accused of terrorism. Freedom has not returned to Turkey in many years and his games are not broadcast in the country.

During his trip to Israel, his first to the Jewish state, Freedom visited Yad Vashem, the World Holocaust Remembrance Center. He told JI that the experience had made him more motivated to speak out against antisemitism and work harder to help his fellow Muslims better understand Jews and Israel.

“I always knew about the Holocaust and the six million that were murdered, but I didn’t know it was this deep and now I am more motivated than ever before about fighting antisemitism,” he said.

“As a kid growing up in Turkey, there was so much antisemitism,” Freedom recalled, describing how as a child he witnessed friends in his neighborhood burning American and Israeli flags. “My mom always told me not to hate anyone before meeting them and I promised her I would – and I am really happy that I listened to my mother.”

It is this refusal to hate that inspired Freedom to launch his basketball camp in Israel last week. Taking place at the Jerusalem YMCA, the two-week program aims to bring together Muslim, Jewish and Christian children to not only work on their basketball skills, but also to learn faith-driven values and life skills.

“It was amazing,” said Freedom, describing how his vision for peace was reinforced on Sunday when, during a friendly five-on-five game, he witnessed one of the Israeli kids high-fiving a Palestinian player after making a basket.

“I believe that we can use basketball to promote tolerance, respect and coexistence and by bringing children together on a basketball court, I know we can show them the importance of respecting each other,” he emphasized.

The camp — which is being underwritten by American nonprofit Bnai Zion, Athletes For Israel, a nonprofit that works to combat antisemitism, and Together Vouch for Each Other US, which was started by a group of young Israeli Arabs determined to bring about change in their community — is being run on the ground by American-Israeli former professional basketball player Tamir Goodman.

Rabbi Ari Lamm, chief executive of Bnai Zion, who accompanied Freedom on his trip, told JI that “pop culture in general is the great equalizer.”

“I don’t care what your background is, we can all appreciate that Kendrick Lamar is amazing, or that Lionel Messi is great, but what makes sports like basketball special is that it’s the kind of thing where you can only win if you come together and build something larger than yourself,” he said. “In basketball, Michael Jordan’s the greatest of all time, but he’s nothing without a great team, and that’s the message we want to help Enes bring to kids from all different backgrounds in this land.”

Freedom told JI that the summer program was just the start of what he hopes to do. He said he dreams of making it a permanent, yearlong fixture in Jerusalem, expanding the program to other cities in Israel and even including participants from across the Middle East — an “Abraham Athletes Accord,” he quipped, “Then I’ll get to come back here every year.”