Last cycle, pro-Israel groups spent millions against Omar, who won by 20 points. This year, they sat the race out — and she won by just two points 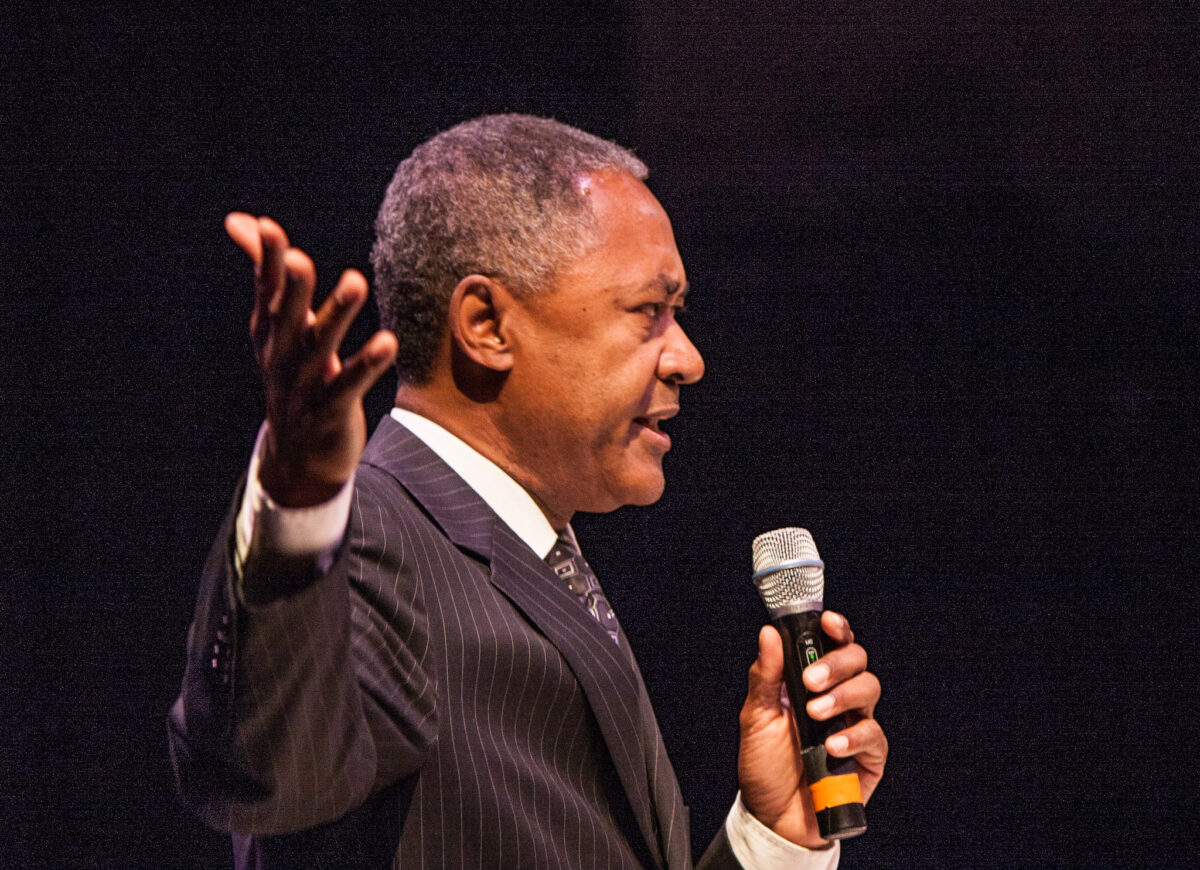 It’s a question that Samuels, who lost to Omar by just 2,500 votes, is asking, too: “We were very, very frustrated by the lack of support from organizations that have ‘Antone fatigue,’… maybe ‘Black male opponent fatigue’ — not understanding that there are different kind of candidates, and that my potential for beating Ilhan was very high,” Samuels told Jewish Insider on Wednesday, referring to Antone Melton-Meaux, who challenged Omar in the 2020 primary.

Two years ago, Omar, whom fellow legislators have accused of antisemitic rhetoric, vanquished Melton-Meaux, who received millions of dollars from pro-Israel donors — a community that roundly sat out this year’s contest.

In addition to holding back funds from the race, political action committees affiliated with AIPAC, Democratic Majority for Israel, Pro-Israel America and the Jewish Democratic Council of America also chose not to endorse Samuels.

In 2020, 72% of the donations received by Melton-Meaux came from individuals who didn’t live in Minnesota — compared to Samuels, who this year received 89% of his contributions from in-state.

“I know that there were people I called and that were called on my behalf to say, ‘We need your help, we need your endorsement, we need your dollars, we need your support,’” Samuels recalled. “And they said, they said it very clear, ‘We’re not going to invest in this. Antone lost. She can’t be beaten. And so we’re looking at other races where we can have more impact and where our dollars will be more likely to make a difference.’ So we had to just eat it.”

Instead, Samuels’ strong showing in the state’s 5th Congressional District, which covers all of Minneapolis and parts of suburban Hennepin County, appears to be the result of local grassroots support and the last-minute involvement of a locally funded super PAC that attacked Omar for supporting efforts to defund the police.

“I think the main thing that drove a lot of local people to be very, very concerned about her was her prominent role in the defund the police movement, which was overwhelmingly, in fact, rejected by the voters of Minneapolis,” said Vance Opperman, president and CEO of Key Investment, Inc.. Opperman’s company contributed $50,000 to Make a Difference MN-05, which spent $625,000 on ads supporting Samuels.

Last year, Minneapolis voters rejected a ballot measure that would have replaced the Minneapolis Police Department with a “public-health oriented” Department of Public Safety. Omar supported the measure and campaigned against its opponents, including Minneapolis Mayor Jacob Frey. Frey endorsed Samuels in the primary.

But the close race has led critics of Omar to wonder if Samuels would have crossed the finish line with backing from pro-Israel donors.

“The fact that it’s actually a close race points up the absolute cowardice of groups that stayed on the sidelines,” Seth Mandel, a conservative journalist and the executive editor of the Washington Examiner Magazine, wrote on Twitter.

Publicly, none of the pro-Israel PACs have expressed regret about opting not to get involved. But privately, pro-Israel Democrats told JI that they feared getting involved would backfire and give Omar a boost.

“People went to the right conclusion that she was vulnerable, she may be vulnerable locally, but that nationalizing the race would be a mistake. So can you be helpful without making it a big national event?” asked one Democrat who supports pro-Israel causes. “The question for people who want to make a difference, want to support pro-Israel candidates, want to ensure pro-Israel support, have to work through: How can you be most helpful?”

Omar has faced heavy criticism from many for antisemitic remarks dating back to her 2018 congressional campaign, when old tweets surfaced in which she called Israel an apartheid state and alleged that Israel “hypnotized the world.” In February 2019, just a month into her first term, she tweeted that congressional support for Israel is “all about the Benjamins baby.” Since then, she has publicly clashed with pro-Israel elected officials and activists.

Last year, after Omar appeared to link Israel and the U.S. to the Taliban and Hamas in a tweet, AIPAC responded with a Facebook ad that used a photo of Omar overlaid with the text: “Stand WITH America. Stand AGAINST terrorists.” The caption read, “Tell Rep. Omar: Condemn terrorists, not America.” An AIPAC spokesperson declined to comment when asked why the group did not make an endorsement in her race.

In a rare interview this week with The Washington Post, days after AIPAC-endorsed Rep. Haley Stevens (D-MI) defeated fellow incumbent Rep. Andy Levin (D-MI) in a Detroit-area primary, longtime AIPAC CEO Howard Kohr discussed the group’s tactics. He noted that the pro-Israel lobby opposed Levin due to his “willingness to defend and endorse some of the largest and most vocal detractors of the U.S.-Israel relationship,” likely a nod to Levin’s relationships with Omar and Rep. Rashida Tlaib (D-MI). But AIPAC did not get involved in either Omar or Tlaib’s primary races.

The United Democracy Project, a super PAC affiliated with AIPAC that has spent tens of millions of dollars in Democratic primary campaigns this year, also did not get involved in Omar’s race. A UDP spokesperson did not respond to a request for comment from JI.

After Omar defeated Melton-Meaux by 20 percentage points in that race, PIA’s executive director, Jeff Mendelsohn, praised the challenger’s performance: “Ilhan Omar faced the stiffest challenge of her career and a tougher race than any other member of the ‘Squad’ in Congress,” Mendelsohn said in 2020. “We all know that unseating an incumbent is an uphill battle, but Melton-Meaux was a strong candidate who made incredible inroads.”

“With the support of the pro-Israel community,” Mendelsohn continued, “he received nearly 40 percent of the vote last night.” This year, Pro-Israel America did not make an endorsement in the race.

Mendelsohn told JI on Wednesday that Omar’s weak showing “proves Rep. Omar is more politically vulnerable than ever” and that her “narrow primary survival last night shows again just how out-of-touch she and her dangerous policy stances are with her constituents.” But he did not respond when asked why PIA did not endorse Samuels or otherwise get involved in the race.

Omar’s comments on Israel have garnered criticism even from fellow Democrats. After her February 2019 remarks about the pro-Israel lobby, the House of Representatives passed a resolution condemning antisemitism, although it did not name Omar, and was amended to also condemn “Islamophobia, racism and other forms of bigotry.”

Democratic Majority for Israel, which has criticized Omar’s past comments on Israel as trafficking in “anti-semetic [sic] stereotypes,” did not get involved in the race this year or in 2020. DMFI declined to comment about its decision not to get involved in the Omar-Samuels contest.

Jewish Democratic Council of America said in 2019 that Omar’s “decision to publicly repeat an anti-Semitic trope” is “deeply offensive and painful,” but they also did not make an endorsement ahead of Tuesday’s primary.

“With so much on the ballot in November,” Halie Soifer, CEO of JDCA, told JI in a statement, “Jewish Dems are focused on defeating Republicans and expanding Democrats’ congressional majorities by electing Democrats who share our values in the general election.” In other races, JDCA did make endorsements, even when incumbents were involved — such as the Stevens-Levin primary in Michigan, where JDCA endorsed Stevens.

Constituents argue that support from activists and donors outside the Minneapolis-based district might not have been enough to help Samuels, and that the barrage of pro-Israel spending last year may have worked to Omar’s advantage.

Melton-Meaux “was perceived by the public as a puppet for the cause, and if AIPAC had put any money in [for Samuels], I think it would have tarnished [him],” a member of the Twin Cities Jewish community, who requested anonymity to speak freely, told JI.

Samuels attacked Omar for distancing herself from the Democratic Party in Washington rather than supporting her constituents. “Very often the congresswoman is outside of the Democratic bus, if you want to call it that, yelling at the bus, instead of [being] onboard, influencing, prodding, pushing,” Samuels told TC Jewfolk, a local Jewish news site, in March. “She stays outside, she doesn’t contribute her weight of resources or our needs and wants – our wants as a district – to the direction that the party is moving in.” Omar was one of six Democrats to vote against the Democrats’ signature infrastructure bill last November.

Opperman said he doesn’t think increased spending from groups outside of Minnesota would have helped Samuels defeat Omar, and argued that Samuels’ grassroots base is actually how he differed from Omar.

“A lot of her support is outside of the district, and driven by progressive politics in other parts of the country,” he said. “Don’s support is very local.”

Samuels would’ve taken the support — if it were offered. He attributes activists’ miscalculation to a fundamental misreading of the district, and a failure to grasp that Melton-Meaux, who had never held office before, was not the right candidate to take on Omar.

“I’ve been doing [this] for years, and they underestimated the cumulative impact of that, and me being seen as someone who could bring people together,” he explained. “I believe that people did not understand that over time, when you live like that, you have something to talk about. There’s an appeal to that, a believability to that, that Antone could not come near.”

Samuels did not say whether he would run again in 2024.