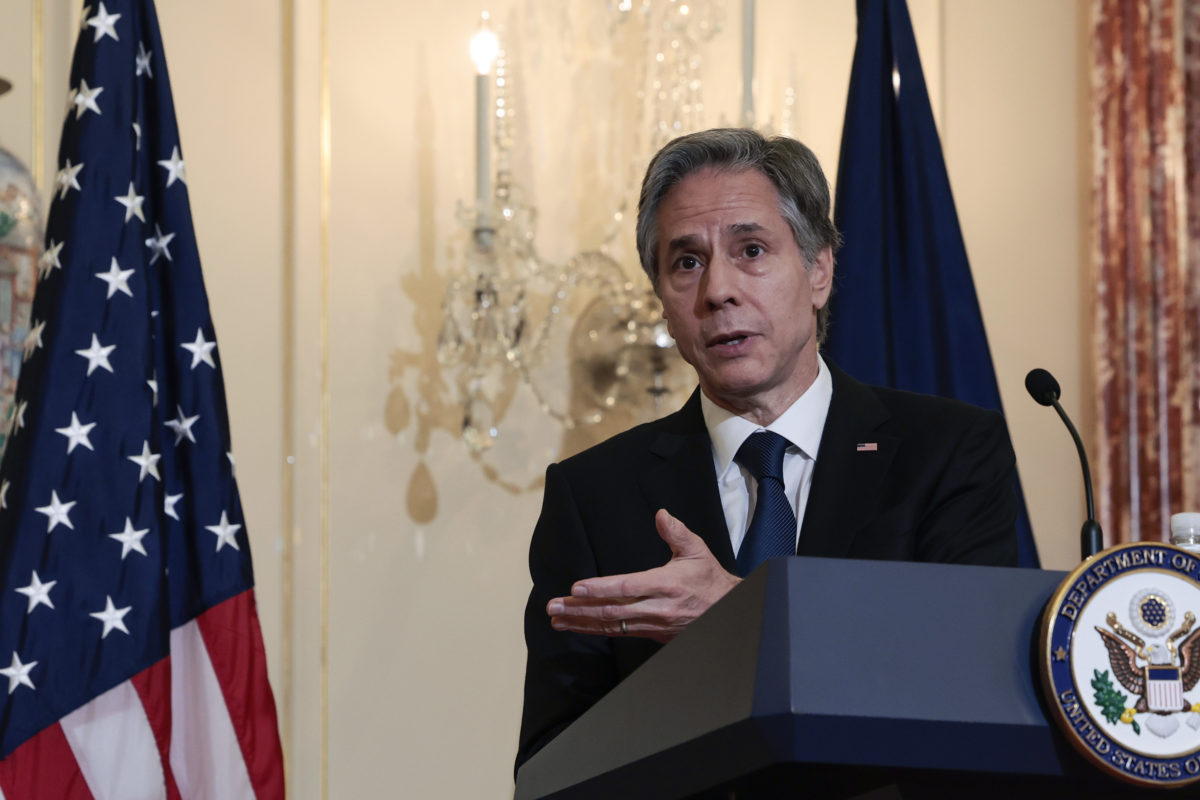 Secretary of State Tony Blinken speaks during a joint press conference with Secretary General of the North Atlantic Treaty Organization (NATO) Jens Stoltenberg, in the Benjamin Franklin room of the State Department on June 01, 2022, in Washington, D.C.

Secretary of State Tony Blinken highlighted Riyadh’s potential role in expanding the Abraham Accords on Wednesday, ahead of an expected visit to the region by President Joe Biden later this month.

“Saudi Arabia is a critical partner to us in dealing with extremism in the region, in dealing with the challenges posed by Iran, and also I hope in continuing the process of building relationships between Israel and its neighbors both near and further away through the continuation, the expansion of the Abraham Accords,” Blinken said at a virtual event celebrating the 100th anniversary of the founding of Foreign Affairs magazine.

Saudi officials have recently spoken about potentially normalizing ties with Israel, but insist the country will not move forward until progress has been made on addressing the Israeli-Palestinian conflict.

“I think we have always seen normalization as the end result, but the end result of a path,” Saudi Foreign Minister Prince Faisal bin Farhan al-Saud said last week at the World Economic Forum in Davos, Switzerland. “We always envisioned that there will be full normalization with Israel, and I’ve said before that a full normalization between us and Israel, between the region and Israel, will bring immense benefits — we won’t be able to reap those benefits unless we address the issue of Palestine.”

Blinken’s comments came in response to a question from Dan Kurtz-Phelan, the editor of Foreign Affairs, who asked whether Biden will emphasize human rights on a visit to Riyadh. (Blinken did not confirm the reports of Biden’s planned visit.)

“When we came in, President Biden was determined that we recalibrate the relationship with Saudi Arabia, and to make sure that it – that relationship was serving our own interests, as well as our values,” said Blinken, “but also preserving it, because it also helps us accomplish many important things.”

The Biden administration has tried to balance Washington’s strategic interests in the Middle East with its commitment to human rights. Throughout the 2020 presidential campaign, Biden spoke critically of the U.S. relationship with Saudi Arabia, promising to “order a reassessment of our relationship with Saudi Arabia” and “restore a sense of balance, perspective, and fidelity to our values in our relationships in the Middle East.”

He told the Council on Foreign Relations in 2019 that he would “end U.S. support for the disastrous Saudi-led war in Yemen,” and condemned then-President Donald Trump’s handling of the murder of Saudi journalist Jamal Khashoggi, calling it “among the most shameful moments of this presidency.”

In a November 2020 op-ed published after the presidential election, Aaron David Miller wrote in Foreign Policy that Biden would be “Saudi Arabia’s worst nightmare.”

In recent weeks, the administration has taken a more measured approach. Blinken spoke over the weekend with the Saudi foreign minister, and a State Department readout of the meeting said the two discussed “opportunities for greater cooperation on regional issues.” Last month, the U.S. and Saudi Arabia participated in a strategic planning meeting at the Department of Defense. Under Secretary of Defense for Policy Colin Kahl and Saudi Vice Minister of Defense Prince Khalid bin Salman “reaffirmed the strength of the U.S.-Saudi defense partnership,” according to a U.S. readout of the meeting.

“We want to make sure that through the relationship we are addressing the totality of our interests in that relationship,” Blinken said at the Foreign Affairs event. He spoke about U.S cooperation with Saudi Arabia, the United Arab Emirates and the United Nations to bring about a truce in Yemen, which he referred to as “real progress in actually dealing with one of the worst conflicts the world has seen over the last decade.”

The “recalibration” in the relationship, Blinken added, must take into account American values as well as American interests. “That goes to values and it goes to human rights and democracy; it also goes to other interests that we have that are necessary for the well-being of the American people,” he said.