Arizona GOP Senate candidate Mick McGuire: ‘I do not support a two-state solution’ 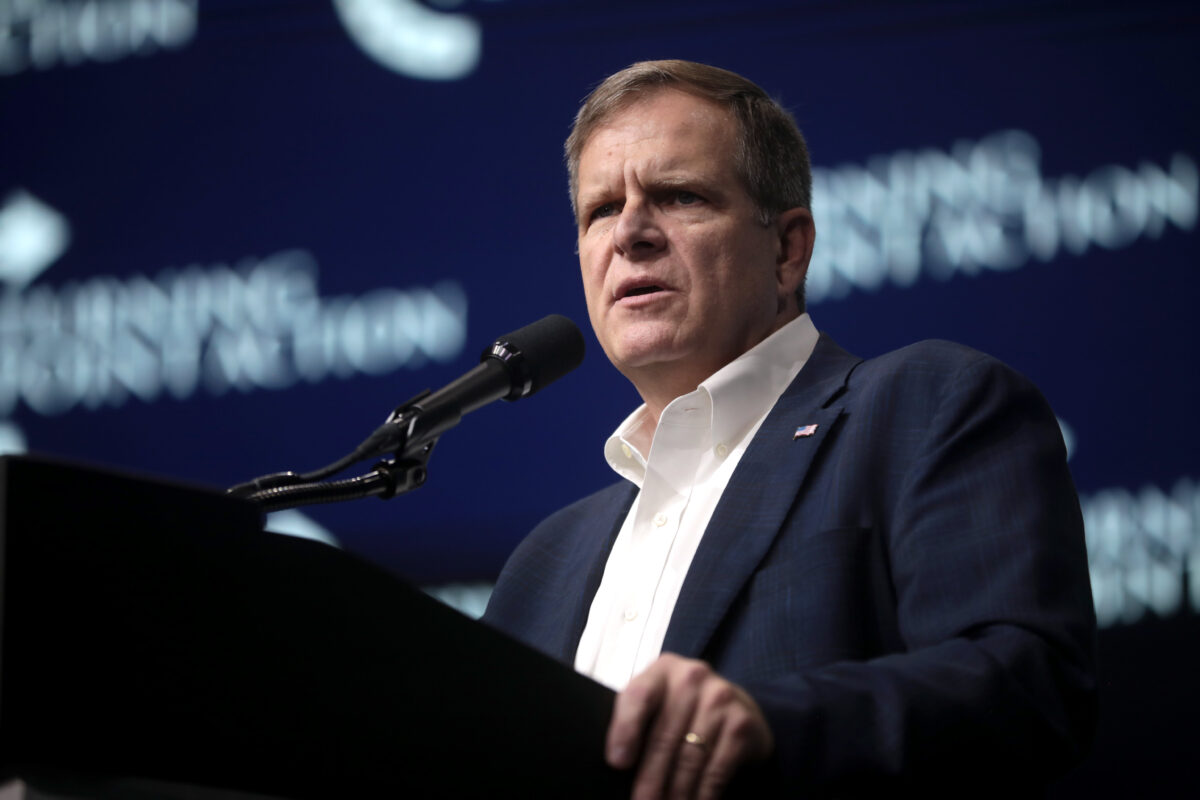 Michael "Mick" McGuire speaking with attendees at the "Rally to Protect Our Elections" hosted by Turning Point Action at Arizona Federal Theatre in Phoenix, Arizona.

Mick McGuire, a Republican Senate candidate in Arizona, said he does “not support” a two-state solution to the Israeli-Palestinian conflict, arguing that Palestinian leadership “has repeatedly negotiated in bad faith” and “affirmed” its “commitment to the destruction of Israel.”

“I do not believe the Palestinian National Authority wants such a solution,” McGuire wrote in a questionnaire solicited by Jewish Insider. “There can be no two-state solution when one state remains committed to conflict.”

In rejecting the two-state concept, McGuire, the former adjutant general of the Arizona National Guard, joins a growing number of Republicans who have recently backed away from supporting the establishment of an independent Palestinian state alongside Israel.

All but one of the leading candidates in Ohio’s recent GOP Senate primary, for instance, refrained from explicitly endorsing a two-state solution, even as it has long been viewed as a bipartisan tenet of American foreign policy in the Middle East.

Such opposition is part of a growing trend within the Republican Party, whose platform omits references to the two-state solution. Since 2016, the GOP has advocated for a hands-off approach to the conflict, frowning upon “any measures intended to impose an agreement or to dictate borders.” Instead, the party favors “the establishment of comprehensive and lasting peace” through negotiations “among those living in the region.”

McGuire expressed a similar view in his questionnaire. “If Israel decides to pursue a two-state solution, they must remain free to negotiate without any international pressure,” he wrote. “In the absence of a two-state solution, Israel must be free to defend its territory, its citizens and its settlements without risk of retaliation. That includes Israel’s right to annex land needed for its own security, or for the protection of its citizens.”

The retired military leader, who stepped down from the National Guard last year, is one of five Republican primary candidates now vying for the chance to go up against Sen. Mark Kelly (D-AZ) in what is expected to be among the most competitive races of the midterms.

While he is known for his role in leading Arizona’s pandemic response, McGuire, 57, has struggled to gain traction in the crowded field, with less than two months remaining until the August primary.

The latest independent polling, released on Monday and conducted by the Trafalgar Group, showed McGuire in fourth place and far behind the leading candidates, including Jim Lamon, the well-funded renewable energy executive, and Mark Brnovich, Arizona’s term-limited attorney general. Blake Masters, the author and venture capitalist, led the pack at 29%, boosted by a recent nod from former President Donald Trump.

For his part, McGuire has notched endorsements from Arkansas Gov. Asa Hutchinson, former Alaska Gov. Sarah Palin and Barry Goldwater, Jr. (R-CA), the former congressman whose father once held the Senate seat that Republicans are hoping to win back this November.

McGuire, a resident of Phoenix, launched his campaign last June and has raised $2.1 million, nearly half of which came from a personal loan, according to the most recent filings from the Federal Election Commission.

Though the GOP field is broadly aligned on domestic issues — border security chief among them — some other differences have emerged as the candidates have sought to explain their foreign policy approaches.

In an interview with JI earlier this year, for instance, Masters expressed ambivalence about the feasibility of a two-state solution but did not go as far as McGuire in opposing the concept outright. “I’m not an expert here, but I guess in principle, I’m open to it,” Masters acknowledged, “and in practice, it’s just like, I feel like I’ve grown up watching Israel try, in good faith, to coexist, and it’s always: Nope.”

More recently, Masters, 35, has drawn scrutiny for past writing from his college days unearthed by JI, including an essay in which he referenced a “poignant quotation” from Hermann Goering while arguing that “the U.S. hasn’t been involved in a just war in over 140 years.”

The first-time candidate also once shared an article on Facebook that criticized Israel as “the North Korea of the Middle East.” (The post appears to have been removed since it was uncovered by JI in late April.)

His main rival, Lamon, has aggressively seized on such details, featuring Masters’ old online scribblings in a dramatic attack ad, released in early June, as well as a stark new website.

Meanwhile, Lamon raised some eyebrows when he indicated last month that he had not ruled out the possibility of cutting U.S. aid to Israel — an unusual suggestion for a Republican Senate candidate.

“Every foreign aid dollar spent must be in the interests of the American taxpayer, and American security,” he told JI in a questionnaire. “Anything that does not meet that standard should be eliminated, but Israel would likely be the last on the cut list.”

Brnovich, on the other hand, has said he is “wholeheartedly” in favor of continued U.S. security funding for Israel.

Even as McGuire called for an “overhaul of our foreign aid system,” he insisted that the “budget must prioritize support for allies like Israel and countries that represent a strategic partnership and commitment to our long-term goals in the region.”

“Israel is our strongest ally in the Middle East and one of our greatest allies across the globe,” he said in his questionnaire, describing the Jewish state as “an unmatched resource for intelligence sharing and military capability, which is vital for combatting hostile powers.”

By way of example, McGuire recounted his experience serving as a fighter pilot in the Gulf War. “In that struggle to liberate Kuwait,” he said, “my fellow pilots and I were able to focus on the Kuwait front because we knew the Israeli Air Force had our backs in the west. Their vigilance made the allies’ work safer and more effective in Kuwait.”

“I am grateful for our allies,” McGuire wrote, “but I hold a special place in my heart for the Israeli military.”