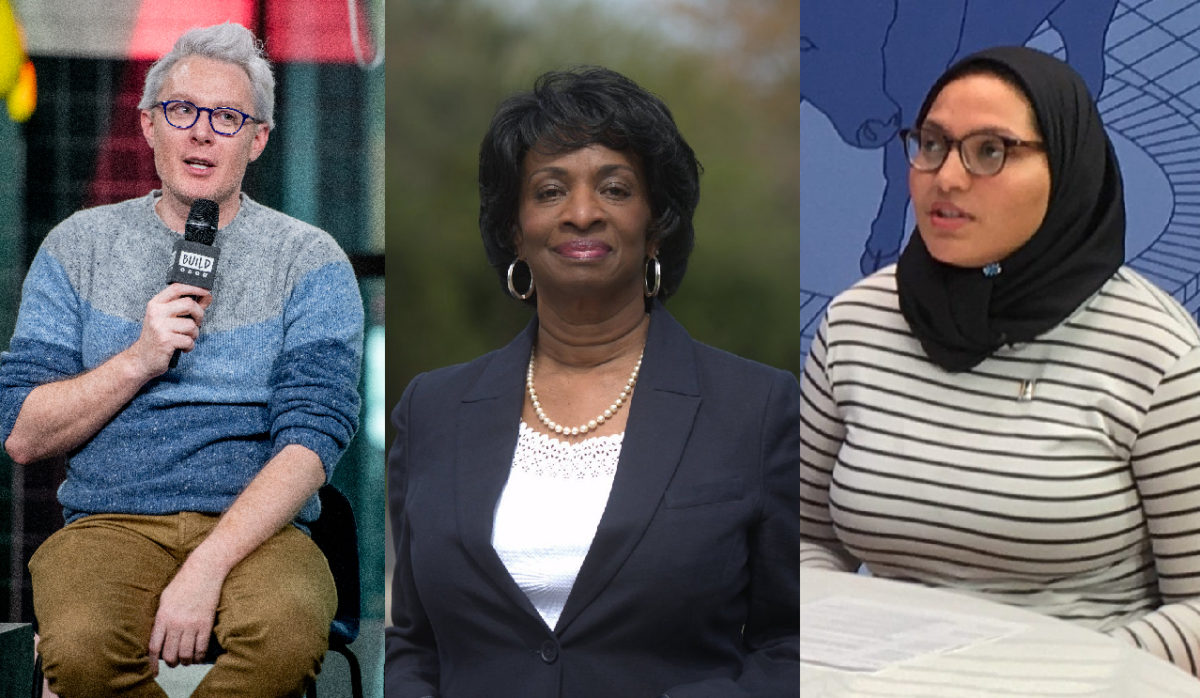 RALEIGH, N.C. — It’s as much the political season here as it is the playoffs in professional basketball and hockey, and for North Carolina TV viewers, every commercial break during games features a consistent onslaught of campaign ads ahead of Tuesday’s primary.

One such spot highlights the career and accomplishments of state Sen. Valerie Foushee, who is running for the Democratic nomination in North Carolina’s 4th Congressional District, which includes the overwhelmingly blue Durham and Chapel Hill communities.

The ad, itself, is rather generic; but the disclaimer at the end notes that it is officially paid for by the United Democracy Project (UDP), which bills itself as “an organization comprised of American citizens – Democrats, Republicans and Independents – united in belief that America’s partnership with our democratic ally Israel benefits both countries.”

UDP is the new super PAC of AIPAC, the large pro-Israel lobby – but the TV spot never mentions Israel, nor does it reference anything about foreign policy.

Such is the conundrum at play for an establishment Democrat like Foushee in this big-money, high-stakes race to replace longtime incumbent David Price (D-NC), where the winner of the primary is a virtual lock to win the general election in November. But unlike similar contested Democratic primaries in congressional districts in and around Cleveland and Detroit, where Israel has emerged as a key campaign issue marking a dividing line between moderates and progressives, in the Research Triangle it’s a subtle yet strong undercurrent.

The three leading candidates vying for the nomination are Foushee, Durham City Councilwoman Nida Allam and former “American Idol” finalist Clay Aiken, and they each offer distinct options for voters in a region dominated by college campuses like Duke University and the University of North Carolina-Chapel Hill, which are blue precincts in an otherwise conservative state and home to both older, liberal professors and more progressive-minded students and young professionals.

“It’s essentially this battle for what the Democratic Party looks like in a left-leaning urban area,” Colin Campbell, editor of the North Carolina Tribune and longtime state politics reporter, explained in an interview with Jewish Insider. “David Price was a guy who was a Democratic war horse. He never got in a controversy and embodied the mainstream.”

Price, 81, announced he would not seek reelection last fall after more than 30 years representing the region. Domestically, he’s been a champion for boosting funds for affordable housing and public transit projects through his powerful seat as a senior member of the House Appropriations Committee and chairman of the Subcommittee on Transportation, Housing and Urban Development (Price’s addition to the 2022 Omnibus spending package added $81 billion in discretionary spending to the Housing and Urban Development department and the Department of Transportation).

Regarding foreign policy, Price has been active in Homeland Security appropriations, as well as State and Foreign Operations, which has allowed him to share his dovish voice at all the negotiating tables relevant to the Middle East.

In February, Price led a delegation of 10 congressional Democrats to Israel sponsored by the left-leaning J Street.

“We gave a broad perspective of friendship and support for Israel – that’s uniform among our 10 members,” he told JI shortly after the trip, adding, “The best way to express friendship is to be honest.”

Price’s successor undoubtedly has big shoes to fill. The candidates, meanwhile, have hardly mentioned Price’s record in any of their campaigns. According to Campbell, the 2022 Democratic primary has instead emerged as an unofficial referendum on the kind of representation voters here want in Washington.

“Do people still spend 20-30 years in Congress, or do they have other political ambitions? Nida Allam is young, and Valerie Foushee could still have a lot of years left in politics,” Campbell explained. “If they want the seat, and they win, they’re potentially entrenched for a long time.”

Allam, 28, was among the first to enter the race after Price’s announcement. Self-described as “unapologetically progressive,” Allam was the first Muslim American woman to be elected to office in North Carolina when she won a seat on the Durham County Board of Commissioners.

At first, her candidacy was seen as an intriguing option for progressive voters, especially as Allam served as political director in Sen. Bernie Sanders’ (I-VT) 2016 presidential campaign. Locally, Allam earned a seat on the North Carolina Democratic Party’s executive council and was chair of Durham Mayor’s Council for Women.

Her decision to run for office was also seen as part of an engaging storyline, as three of her friends, who were Muslim, were killed in a 2015 shooting at a house near UNC Chapel Hill. Craig Hicks, the victims’ neighbor, was convicted on three counts of first-degree murder and is serving three life sentences without parole, but the local Muslim community unsuccessfully demanded the case be prosecuted as a hate crime.

“I’m fighting for a better Durham so that others don’t have to suffer the pain my community did,” she said during her run for commissioner.

Allam did not respond to multiple requests for an interview with JI.

“On the County Commission, Nida delivered wins like a $15 minimum wage for county workers, and property tax relief that helped families stay in their homes during the pandemic. She’s the right person to fight for North Carolina’s working families in Congress,” Warren tweeted.

As her profile grew, however, so did the scrutiny of Allam’s record, associations and statements on social media. Last year, Allam posted videos of her marching in a pro-Palestinian rally in downtown Raleigh where protestors chanted slogans such as “Israel is an apartheid state” and “From the river to the sea, Palestine will be free” – a chant widely panned as a call to eradicate the Jewish state.

In 2018, Allam was among those who successfully pushed the Durham City Council to pass a resolution banning training and exchanges between the Durham Police Department and the Israeli military – even though no such cooperation, or plans for such engagement, ever existed.

Also in 2018, Allam tweeted, “This is the United States of Israel” after President Trump announced he would suspend aid to the Palestinian Authority.

“It’s never just the person. If Allam gets elected, the community will support her – and that’s the community of the Durham resolution,” Stanley Robboy, professor emeritus at Duke University and chairman of the Foundation Board at Jewish For Good (formerly known as the Jewish Federation of Durham-Chapel Hill), told JI. “Her election would be a Durham redux but on a national scale.”

In December, Allam tried to allay concerns of the Jewish community in an op-ed in INDY Week, an alternative weekly in Durham, writing “we must stand in solidarity with (Jews) and unequivocally condemn anti-Semitism and bigotry in all its forms…For my tweet and lack of sensitivity to what was captured and then posted in my personal livestream of that protest, I deeply apologize.”

For voters like Robboy, however, electing Allam to the House carries the risk that she would potentially fan the flames of antisemitism instead of quenching them, especially in the context of other antisemitic incidents in the region, including a 2019 “Conflict Over Gaza” conference which featured a Palestinian rapper openly calling for the cheering crowd to be antisemitic “like Mel Gibson.”

That conference also led to an outcry, including from a North Carolina congressman, who directed the U.S. Department of Education to investigate the use of federal funds for the program.

Also at UNC, a professor teaching a course on the Middle East was found to have posted on social media referencing “Zionist dirtbags” and the U.S. as an “imperialist death cult.”

“She’s going to be part of [the Squad], there’s no question,” Robboy said, referring to the far-left caucus that includes Reps. Omar and Tlaib, as well as Rep. Alexandra Ocasio-Cortez (D-NY) and Rep. Ayanna Pressley (D-MA). “This would be one more person leading anarchy in the country.”

Robboy sees potential in the candidacy of  Foushee, who has been his state senator since 2013. In April, Robboy hosted a fundraiser for Foushee at his home where dozens of supporters attended.

“I just knew she was a nice lady,” Robboy quipped. “I wanted to understand who this woman is and she delighted me beyond my wildest expectations. She took questions for an hour and a half, talked a lot about her career, her philosophy about equal opportunity. She didn’t get into specifics of Israel, but she said she will support everyone with a good agenda.”

Foushee has garnered support from establishment North Carolina Democrats, including the two current members of the Congressional Black Caucus, Rep. G.K. Butterfield (D-NC) and Rep. Alma Adams (D-NC). Foushee has also earned the endorsement of sheriffs, police chiefs and the state’s attorney general, among many others. (Foushee also did not respond to multiple requests for an interview with JI.)

Those endorsements, though, don’t always pay the bills. Foushee’s campaign has relied on big spending from outside groups, including UDP, whose association with AIPAC led to the North Carolina Democratic Party’s Progressive Caucus pulling its endorsement of Foushee.

The caucus’ statement cited UDP’s endorsements of other candidates, including dozens of Republicans who voted against certifying the 2020 presidential election.

“No American candidate should be accepting funds from an organization that provides financial support for those seeking to destroy our democracy,” the statement reads.

“AIPAC political donors can earmark dollars to candidates they want,” Greyber wrote in an op-ed on WRAL.com with Bishop Ronald Godbee from The River Church. “We choose not to support candidates that failed to certify the election or who push the ‘big lie’ subverting our democracy. At the same time, we reject litmus tests for politicians that will reduce the number of elected officials who support Israel. We are smart and sophisticated enough to do both. We all can walk and chew gum.”

Allam’s supporters have seized on the UDP spending for Foushee, which totaled nearly $300,000 in the last filing. Critics have also blasted Foushee’s relying on cash from another PAC, Protect Our Future, whose main benefactor is billionaire and cryptocurrency investor Sam Bankman-Fried.

“It’s always surprising when you see a minority from Chapel Hill getting pushback from progressives,” state Rep. Robert Rieves, the House minority leader in the North Carolina General Assembly, told JI of the attacks on Foushee, who is Black. “I can understand the criticism in theory, but we built an animal in politics that can’t be fed – and that’s the money required. That makes for very difficult decisions for people. We could solve a lot of this by taking money out of politics.”

Rieves, who as a Democratic caucus leader in state government is not making an official endorsement, called Foushee a “wonderful public servant” and one of the “most amazing people” he’s worked with in government.

Rieves did call Allam and Aiken “great people” and credited them for “conducting themselves well” and avoiding “denigrating each other” as they campaign on their own respective qualities and qualifications.

“What I’d love to see is no matter what side of the spectrum in the party, we’re all interested in having more Democrats elected.”

According to the latest poll from Emily’s List, the cash flow may be making an impact for Foushee, who leads Allam 35% to 16% among likely voters, with Aiken earning support from just 10% – but 30% remain undecided.

“There are some folks who see AIPAC who do see too much pro-Israel,” Campbell, the North Carolina Tribune editor, explained. “For the average voter in North Carolina, though, they may not be paying attention to that part of the world. For them this could just be big money from out of state and wondering if this is going to buy a seat one way or another.”