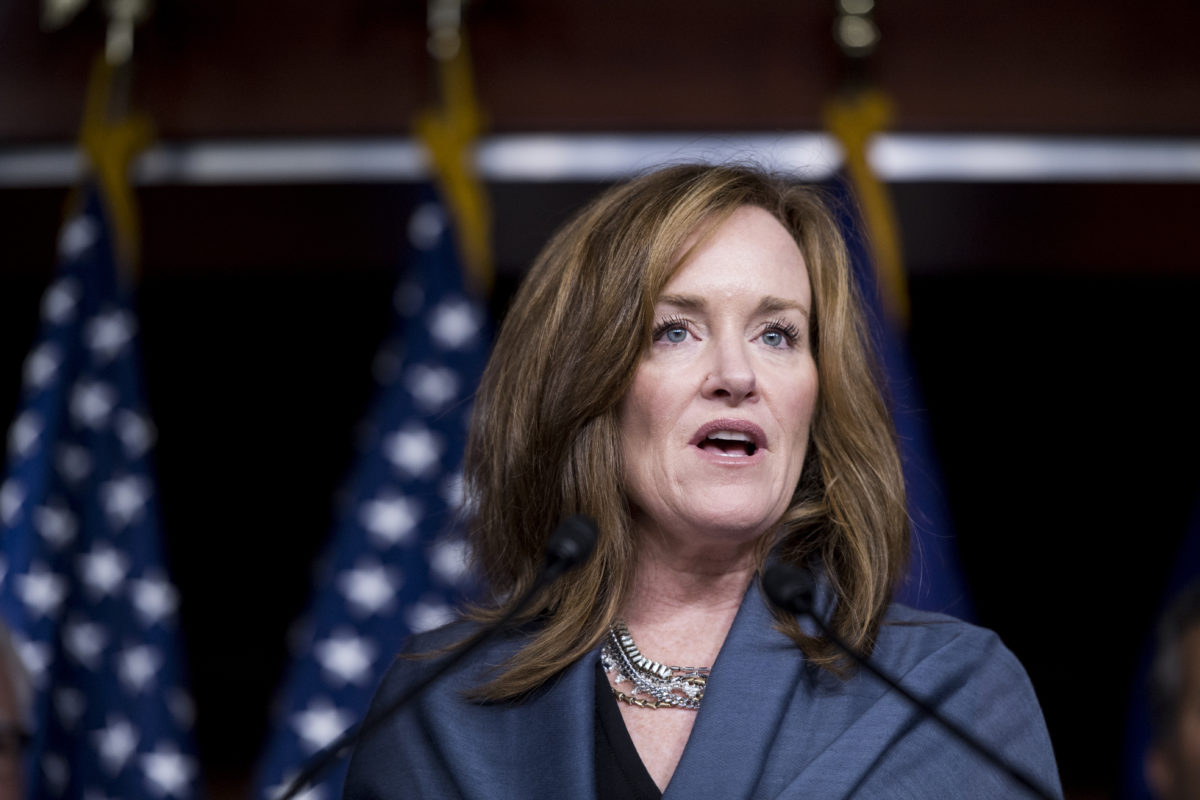 Rep. Kathleen Rice (D-NY) speaks during a press conference on deportation of veterans on Thursday, Nov. 16, 2017.

Rep. Kathleen Rice’s (D-NY) announcement on Tuesday that she will not seek reelection — which came as a surprise to many in New York politics — sets up a dash to bring together a Democratic primary field with just two weeks until the start of the state’s petitioning process.

A statement issued this week by the congresswoman — who took office in 2015 — in which she announced her retirement from Congress offered no specifics as to her decision, saying that she would “remain focused on protecting our democracy and serving my constituents throughout the rest of my term.”

New York’s new congressional maps were signed into law on Feb. 3. But the 4th Congressional District, which includes parts of western Long Island — central and southern Nassau County, including the Five Towns, home to a large Orthodox community — changed little under the new maps, aside from some modifications on the margins. She won the district by eight percentage points in 2020, and President Joe Biden carried it by 12.

“She was in a pretty safe seat, she could have been there for as long as she wanted,” Wallenstein continued.

Others believe Rice may have seen warning signs on the horizon for 2022, which is expected to be a strong year for Republicans nationwide.

“No politician wants to lose or take the risk of losing,” Hank Sheinkopf, a longtime New York Democratic strategist, told JI. “Last fall, suburban politicians, Democrats tended to get in trouble, particularly in New York. Why? Crime… It’s a problem for [Rice], particularly as a former district attorney. And as a congresswoman, she could have paid the price for what people are beginning to perceive as a Democratic mess.”

Sheinkopf emphasized that Democrats lost the Nassau County executive and district attorney races in 2021 in part due to concerns about crime.

“She’s very, very bright and likely smelled a possible change, an expensive race with some possibility of loss,” he added. “Why take the risk?”

The nonpartisan election handicapper Cook Political Report rates the race as “Solid Democratic,” but some on both sides see the potential for a more competitive race.

Democratic consultant Jake Dilemani said that the district is “by no means a lock” for Democrats, and success in November depends both on whom Democrats nominate and Biden’s approval ratings come Election Day. The district, he noted, includes “marginal parts of the county that flip back and forth between the parties” and some areas that are more solidly Republican, such as the Five Towns.

Sheinkopf agreed that the district “should be a Dem[ocratic] seat” but “anything can happen,” pointing to the 2021 county executive and DA losses.

“Don’t count Republicans out,” he continued. “The whole world changed the day Biden pulled everybody out of Afghanistan. When people started getting shot in places no one thought [they would be], that was the end of the game as we knew it. It’s all changed.”

A source close to Gillen confirmed that she is “seriously considering” a bid for the seat. Kennedy told JI he is not planning to enter the race. None of the other potential candidates commented on the speculation.

“It’ll be someone who’s got the capacity to come up with money pretty quickly and who can win,” Sheinkopf said, adding that the primary will likely be competitive.

The petition process to be included on New York’s June 28 primary ballot begins on March 1.

In 2021, Curran lost the county executive slot in November 2021, and Kaminsky lost a bid for Nassau County district attorney. Curran has been deeply critical of fellow Democrats, including Biden and Kaminsky, since her loss.

Wallenstein predicted that the field will likely begin to shape up by the end of the week, given the short timeline for candidates to raise money and bring on staff before petitioning begins.

There could be a similar scramble for candidates on the Republican side. So far, only one candidate, former Marine and tech entrepreneur Bill Staniford, has announced his candidacy.

“Kathleen Rice saw the writing on the wall and knew that the people of Nassau County are going to deliver a reckoning to the Democrat[ic] Party this November,” Staniford said in a statement. “This race just became one of the most competitive in the nation and I look forward to meeting with the Nassau GOP this week to share how I can bring my resources and uniquely-suited background to flip this seat red and help Republicans take back the House.”

Others who could potentially join the race include state Assemblyman Edward Ra, who represents Hempstead, and Nassau County legislator Laura Schaefer, a source familiar with the district said. Ra declined to comment and Schaefer did not respond to a request for comment.

The Five Towns could be a key base of support for a Republican hopeful.

“The combination of the perception that the Republicans will win the House, together with the wide presumption within the Orthodox community that Republicans are stronger when it comes to Israel and Israel policy, I think will be a recipe for a very successful Republican effort in the Five Towns area, as well as West Hempstead and other areas where there are large Jewish communities,” GOP strategist Michael Fragin told JI.

The Five Towns area is currently represented by a Republican assemblymember and several Republican county legislators.

Wallenstein said a Jewish Republican candidate from the Five Towns could make for a compelling challenger in the 4th District.

“I still hold firm in the argument that a Republican can’t win, but I think that a Republican Jewish candidate from the Five Towns with the right campaign could make inroads and do better than the last few challenges that Kathleen Rice had,” he said.

Sheinkopf said that increasing crime and antisemitism have been animating issues for the Five Towns Jewish community.

“They’re responding, the question is how will they respond,” he said.

During her time in office, Rice has been a prominent voice on Israel and other Middle East foreign policy issues including speaking on the House floor in support of Israel during the May 2021 Gaza conflict and working with Democrats to secure a standalone House vote on Iron Dome funding last fall.