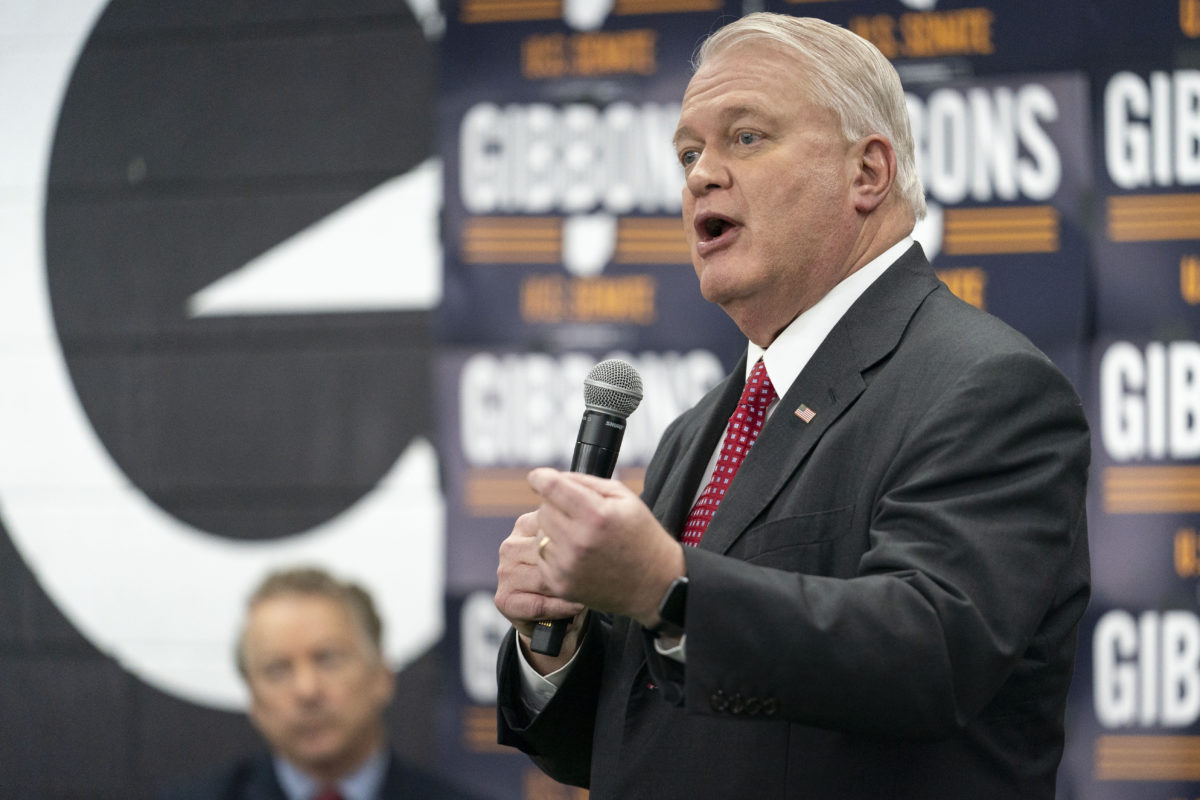 Mike Gibbons, a Republican Senate candidate for Ohio, speaks to supporters during a campaign rally in Maineville, Ohio.

In recent weeks, Mike Gibbons has suddenly found himself on unfamiliar ground as he shoots to the front of the pack in Ohio’s crowded Republican Senate primary.

While Gibbons has long been viewed as a viable contender among nearly half a dozen top-tier candidates seeking the nomination to replace retiring Sen. Rob Portman (R-OH), the Cleveland-based investment banker, 69, has for months struggled to assert his dominance in what has so far been somewhat volatile publicly available polling on the race.

But his numbers now appear to be spiking at an opportune moment, with just under three months remaining until the May primary.

Gibbons’ showing was an improvement over the first independent poll in the race, released by Trafalgar in December; he placed third with 12%, nearly 10 points behind Mandel. For his part, Mandel released his own poll in early February that put him in first with 28%, outpacing Gibbons, in second, by 11 points. That poll was conducted by WPA Intelligence.

More favorably for Gibbons, his campaign released two internal surveys this month, both conducted by Cygnal, that placed him ahead of his opponents for the first time since he entered the race last spring. The most recent poll, made public on Friday, placed Gibbons in first with 23% of the vote and a 12-point lead over Mandel.

In most of the recent polls, a plurality of voters have been undecided, which suggests that the field remains mutable.

Still, in an interview with Jewish Insider on Tuesday, Gibbons expressed confidence about his prospects as he enters the final stretch of the primary. “It’s really a confirmation of what I was always already seeing on the ground,” he said, attributing his newfound momentum, in part, to a statewide campaign tour in which he has so far visited 75 of Ohio’s 88 counties. “We feel we’re connecting, but it wasn’t showing in the polls for a while.”

The Senate hopeful said he expects “to see a continued, positive direction” as the race heats up in the coming weeks.

“I use football as a metaphor in my commercials,” Gibbons said. “Well, we’re in the final quarter here, and I don’t believe in a prevent defense. I’m going to go out and work just as hard as I did in the first quarter.”

Gibbons’ success this cycle, however tentative, represents what could be a major improvement over his previous bid for the upper chamber in 2018, when he came in a distant second in Ohio’s five-way primary Republican primary, losing by a definitive 16-point margin.

“We had announced, and frankly, I was still unsure what I was doing and how I would do it for the first few months, so I didn’t really begin campaigning until December before that May primary to any great degree,” Gibbons said of his previous campaign. “My first speech was in December.”

It hasn’t hurt that Gibbons has now loaned his campaign nearly $11.5 million, according to the latest filings from the Federal Election Commision, having launched a $10 million TV and radio advertising campaign last summer.

On Tuesday, Gibbons released his latest salvo, ridiculing both Vance and Timken as “Washington wimps” while casting himself as “Trump strong.”

Speaking with JI, Gibbons adopted a friendlier tone in sizing up the field. “They’re not personal attacks,” he said of the ads. “I’m on good terms with everybody in the race. For that matter, I particularly like J.D. He’s a nice guy. But we’re trying to point out the differences.”

Former President Donald Trump, who remains popular in Ohio, has yet to make an endorsement in the race, even as most of the leading candidates have aggressively jockeyed for his support. In an interview with JI last May, Gibbons affirmed his support for Trump but expressed reservations over what he described as a “cult of personality” around the former president.

“I don’t think other people should be making up the minds of the voters,” Gibbons explained to JI on Tuesday. “I think they should know that the whole profile of that candidate wasn’t just built for the campaign, as far as their beliefs and their support for various issues and, for that matter, for the various people in office like Donald Trump.”

Gibbons, who worked on Trump’s 2016 campaign, failed to secure the former president’s endorsement when he ran for Senate in 2018. Instead, Trump threw his support behind former Rep. Jim Renacci (R-OH), who lost in the general election to incumbent Sen. Sherrod Brown (D-OH).

This cycle, Dolan is the only top-tier contender who has openly expressed disinterest in courting Trump’s support.

On Wednesday, Timken notched a major endorsement from Portman, whose imprimatur is likely to help her shore up support from the establishment wing of the GOP.

Somewhat curiously, Gibbons’ new TV ad made no mention of Mandel, with whom he has most often found himself competing for first place in recent surveys on the race. “Josh is moving in the wrong direction,” Gibbons said of the conservative rabble-rouser, who has moved further to the right than many of his opponents as he has emulated Trump’s bombastic rhetorical style.

For months, “I was kind of hanging right below the leader, who was Josh, and always either second or third,” Gibbons added. “Now, in every poll, I’m either first or second, and in some polls, and the ones that we’re looking at that we feel are accurate, we’re accelerating ahead and the spread is getting wider.”

“We’re looking at where things are going and what the most effective thing is to get separation between candidates that take votes away,” Gibbons elaborated. “We’ve always known that Josh would be there, probably, in the end, as the guy to beat, and it’s kind of shaping up that way.”

Gibbons said he is working with a “much stronger team” this election, noting that Trump’s 2020 campaign chief, Bill Stepien, had come on board as an advisor earlier this month.

The two-time Senate candidate also touted an early endorsement from Sen. Rand Paul (R-KY), the libertarian firebrand who has joined Gibbons on the trail and recently appeared in a campaign ad. Paul supported Gibbons in 2018 as well.

“We’ve gotten to know each other much better over the last few years, and he’s really kind of stepped up his level of involvement,” Gibbons said. “Nobody that makes up their sudden conservatism is going to get endorsed by Rand Paul.”

In recent months, Paul has angered pro-Israel advocates as he continues to block legislation that would provide $1 billion in supplemental funding for Israel’s Iron Dome missile-defense system. Paul has insisted that the funding, which has been stalled in the Senate since the fall, should be reallocated from aid for Afghanistan.

The legislation passed the House by an overwhelming bipartisan majority last September, 420-9, despite vocal resistance from a small handful of outspoken Democrats and one Republican who voted against the funding.

In a candidate questionnaire recently solicited by JI, Gibbons, who supports additional Iron Dome funding, criticized the eight Democratic House members who opposed the aid. “It is unconscionable that Democrats chose to play politics with this important measure,” Gibbons wrote. “America should always defend the right to a Jewish state.”

But Gibbons was more forgiving of Paul’s maneuvering on the matter. “I have not discussed that specifically with him,” he told JI, sounding unaware of the issue. “I can tell you I adamantly support the Iron Dome funding. There’s always some motive other than whatever it looks like. He’s as fiscal a conservative as anybody in the Senate. When you walk into his office in Washington, you see a big debt clock on the wall.”

“I know for a fact that he’s greatly in support of the State of Israel, so that’s certainly not an issue,” Gibbons said of Paul. “These things get complicated and caught up in issues that may not even be related, and I don’t know that specifically. I’m going to find out. I haven’t focused on it. But all I can say is, Iron Dome is going to get funded if I have anything to do with it.”